It’s not quite right to use the word “meteoric” to describe Hinds’ trajectory as a band. The character of their success might give the impression that they rose out of deep obscurity, but that’s a little unfair. For one, they’re not exactly not obscure; though it certainly helps, a sprinkling of early praise from music writers doesn’t guarantee you a ladder to fame. Also, “meteoric” overshadows all the hard work that founding members Ana Perrote and Carlotta Cosials, along with later additions Amber Grimbergen and Ade Martin, have put into the wonderfully rickety, laid-back energy of that which they must legally call Hinds.

The band have kept busy in the period between releasing a pair of songs as Demo last year and recording their debut album. In that time, the Madrid-based group went from a two-piece to a four-piece; won the Make Noise Malasaña contest; recorded their second single, Barn, with Converse Rubber Tracks; got their demos licensed in the US by Mom+Pop; changed their name from Deers to Hinds after a legal threat from Canadian band The Dears; and completed tour legs that took them through Europe, Australia, England, and the US.

First and foremost, Hinds makes really, really fun music. It’s catchy, but it manages to avoid the pitfalls of total accessibility, with lo-fi touches and wailing vocals to complicate the otherwise poppy and upbeat composition. On stage, they’re just as compelling as on record, if not more. Before retreating to the studio in Spain to record their debut album, the band completed a tour of the US with New York appearances bookending shows at SXSW in Austin and Burgerama in LA.

“We played 16 shows in five days [at SXSW] and three sessions,” says Cosials over Skype after a day at the studio in Spain. “It was tough. But it was like, when you know how many shows you’re going to do and you know the timing and you know everything, you … you get ready, you know? So we did it. And we did it right.”

Live, Hinds bops and jangles through a set like a celebration unto itself, but their infectious energy never abandons its focus. It generates equal intensity from crowds even though only about half of the songs from their set have been posted online or shared elsewhere.

“In November, we [already] had the attitude, in January we got people on stage, and then in Australia…” Perrote stops to think. “I don’t know. We were so wild, so drunk. In America, I feel like after [SXSW], we can do everything we want.”

“Yeah, like there’s no limit: We can play five times during five days, sweating so much — without sleeping, without eating, without anything. It was like [a] superpower.”

In addition to the songs they’ve already released — “Bamboo” and “Trippy Gum” from Demo, along with “Castigadas en el granero” and “Between Cans” from Barn — their setlist features unreleased songs like “Fat Calmed Kiddos”, “San Diego”, and two songs with the working titles “Easy” and “Garden”. At the end of their shows, Hinds are known to close with a rabble-rousing cover of Thee Headcoats’ “Davey Crockett”, which they put on wax for the Record Store Day release Hinds ♥ Parrots, a split single with Madrid’s The Parrots.

About the new recordings, Perrote says, “[It’s going] great! This is the second day here at the studio, and we’ve recorded, like, six songs?”

There is some unintelligible, bilingual back-and-forth, and then Perrote confirms: They’ve put down seven bodies, in addition to some solo tracking and vocals. 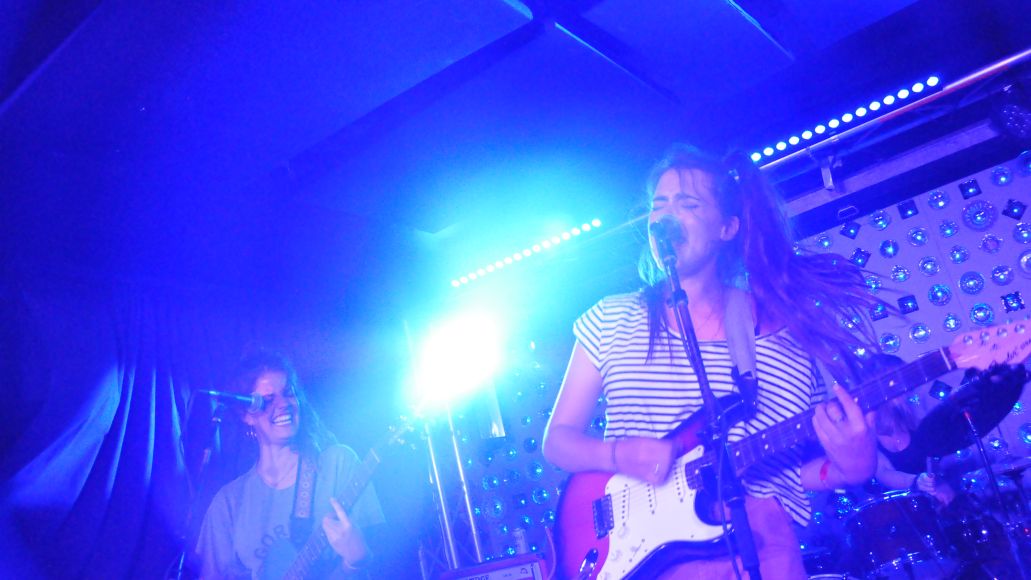 Photo by Will Newman

Just as they do in their music with guitar and vocals, Perrote and Cosials trade off speaking duties in conversation effortlessly. It’s clear that the charisma they exude in their performances isn’t just something they’ve developed for the stage. At three in the morning after a recent show at Baby’s All Right in Brooklyn, with their flight back to Spain in just a few hours, Cosials and Perrote were still electric with their tradeoff act, exchanging duties at the merchandise stand while Martin and Grimbergen provided a loose, flexible rhythm to their collective presence. They floated in from the street, talked to various people, sat with their bandmates, walked to and from others at the bar. Over Skype a dozen days later, fresh off the second day of recording for their debut album, Cosials and Perrote sit by a small couch. Judging by the directions of their shifting gazes, there are people milling about around them, including Grimbergen and The Parrots’ Diego Garcia. It’s as if the world in which Hinds operates functions as a near-perfect analog for the buzz they’ve generated with their music.

Perrote’s eyes mimic a stressed-out bulge for a moment when the pair describe the work they need to finish up for the album, but they color their sentences with bursts of laughter. It’s unclear whether this is nervous energy left over from a long day at the studio or just uncut, topsoil good-naturedness. What is clear is that their superhero-like feelings are still present and active.

“Every song we’ve recorded, we’re screaming, ‘OK, OK, this is our favorite one,’” says Cosials. “So I think we’re happy with what we’re doing. All of them could be a single. Or the favorite song of my mom!”

Still, they say they look forward to “freedom!” from the deadlines they keep in the studio — Perrote issues a peace-out hand signal several times just thinking about it. It doesn’t seem like the attention they’ve garnered from all of the appearances and press mentions has quite caught up with them yet. As a group, they’ve got an incredibly youthful outlook that seems to dull any feelings of pressure lingering from the hype they’ve worked hard to generate since Cosials and Perrote first got together.

As the formation myth goes, the pair started making music together a few years ago when Perrote taught Cosials a few guitar chords. Something instantly clicked. But, again, it can’t be ignored how densely packed their short history as a band has been; saying that something just “clicked” erases a lot of hard work. With a band like Hinds, who have made a name out of producing ebulliently lax garage vibes, this discourse becomes even more slippery.

As of a Facebook update on Monday, April 20th, Hinds were recording the last song for their debut album. After they’re done in the studio, they’ll embark on a spring tour of Europe. Hinds admits they’ve been busy, but it comes off as a fun type of busy — playing live, talking to journalists, putting together an album. Based on how they feel about the forthcoming release, their trajectory as a band seems poised to follow its current course. Their work is paying off, and they’re feeling like superheroes.