In 1989, a trio of Long Island MCs first fell upon the idea of repurposing their favorite songs piecemeal to create something entirely their own. They weren’t the first hip-hop artists to make use of sampling, but their eclectic take on it was unique.

De La Soul didn’t aim to play any part in reshaping popular music when it released its debut, 3 Feet High and Rising. More pointedly, Dave (born David Jude Jolicoeur), Posdnuos (born Kelvin Mercer), and DJ Maseo (born Vincent Mason) didn’t aim to do anything at all other than have fun with music. The trio took a wide-eyed approach to making the album, using pop music’s collective past as its playground. With the help of producer Prince Paul, they strung together a musical collage where the worlds of George Clinton, Hall & Oates, Steely Dan, and British funk acts like Cymande found new life in New York’s hip-hop zeitgeist. All these years later, 3 Feet still sounds unburdened by limitations and driven by possibility.

“There was this innocence that was really special with 3 Feet High and Rising,” said Dave (aka Trugoy, aka Plug 2), calling from the trio’s studio space in Atlanta. “Just not knowing what the industry was about, and just going in and recording music.”

But the three musicians quickly found there was a price to pay for their idealism and artistry. Over the years, their flair for sampling has proven notoriously prohibitive. In 1991, the trio was sued for its use of The Turtles’ 1969 hit “You Showed Me” on their sophomore effort, the classic-in-retrospect De La Soul Is Dead. That led to pressure from record labels to sound more like what was selling, even though the trio consistently made a point of voicing its distaste for hip-hop fads and trends (the boisterous hollering at the outset of “Ego Trippin’ (Part Two)”, for instance, lampooned gangsta rap’s brash, in-your-face style). More recently, De La still has yet to get its catalog up on iTunes or Spotify due to issues with clearing samples, prompting them in 2014 to give away downloads of their records to anyone who wanted them. Looking back, it seems that the trio’s insistence on challenging standard practice for the sake of making solid hip-hop has been fought at almost every turn.

“We never had beef with labels,” Dave said. “I think we had beef with the idea of being told what we could and couldn’t do. [The labels] were obviously just trying to work along with the law. Nobody wanted to get sued or deal with all of that nonsense, but when you feel like the label is trying to persuade you to record this or play this type of music, or stay away from these writers and publishers, that just gets funky sometimes. It just felt weird. When we first got into releasing music, the idea was to just create and get it out there. But sampling has always been this black cloud over our heads. It’s an art form, but it made things difficult in terms of working with a company that had to deal with things of that nature.”

As has always been the case, it’s the fight that makes De La Soul great. Despite the hurdles thrown their way, almost nothing has changed philosophically in the De La camp since 3 Feet’s release. More than 25 years later, Dave, Pos, and Maseo are still very much the same Long Island kids at heart getting by on the stoke of making music on their own terms. These days, that means going independent and making a fan-funded record using samples of their own music. 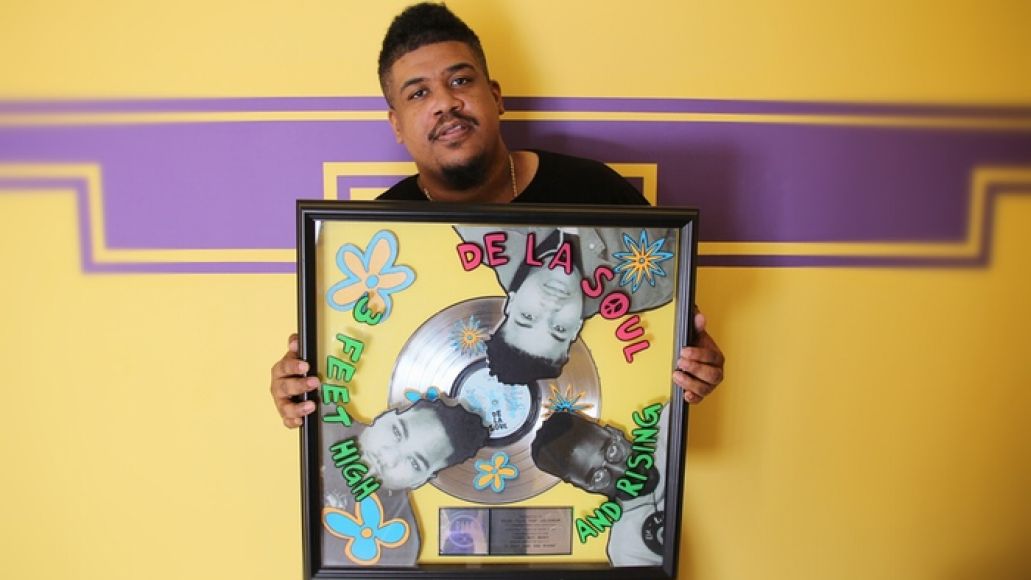 It’s been 11 years since De La’s last proper studio effort, 2004’s comparatively straightforward, noticeably skitless The Grind Date. But the break from recording was something of a misleading hiatus, if you can call it that. The Grind Date satisfied all of the trio’s legal obligations to their then-label, Sanctuary Records, and they spent some time in the immediate aftermath of the record’s release “enjoying [their] independence,” Dave recalled. After touring behind the record, the trio guested on “Feel Good Inc.” from Gorillaz’s 2005 sophomore effort, Demon Days, a collaboration that earned them their first Grammy. More touring followed, this time with a live band, the Rhythm Roots All-Stars, in tow. Before long, De La brought the band into the studio.

“For the last three years, we’ve just been recording music, not really having a sense of direction at first but just enjoying recording,” Dave said. “That basically gave birth to the whole idea of the project with the band.”

The new record’s tentative September release date might still be a ways off, but And the Anonymous Nobody already has the makings to become De La Soul’s most out-of-bounds and diverse offering to date. As we speak, the trio is wading through more than 200 hours worth of music recorded with the All-Stars, trying to find an album’s worth of material to dice, splice, and loop together for its latest effort. They’ve also enlisted some high-profile friends, from Gorillaz/Blur mastermind Damon Albarn to David Byrne, 2 Chainz, and Swedish indie rock outfit Little Dragon.

“2 Chainz, De La, David Byrne, and Damon Albarn,” Dave says aloud to himself. “It’s just so weird. It’s a bunch of misfits who do their own thing and come together to share something new and hopefully amazing.”

Perhaps the only thing that perked more eyebrows than the news of a new De La record itself was the means by which everything came together. Left to finance everything from recording, marketing, and distribution of the record on down to the last detail, the trio campaigned for funding through Kickstarter. More commonly the domain of younger, up-and-coming bands seeking a little help, Kickstarter struck many as an odd fit for a legendary outfit like De La. But that in and of itself was part of the point. “It’s a good way for independent-minded individuals and entrepreneurs who are doing something different from what others are doing to get some support,” Dave said. “That’s the ideology behind a lot of what we do, just, ‘Screw the world, we’re gonna do something that we’re confident in and go that route.’” 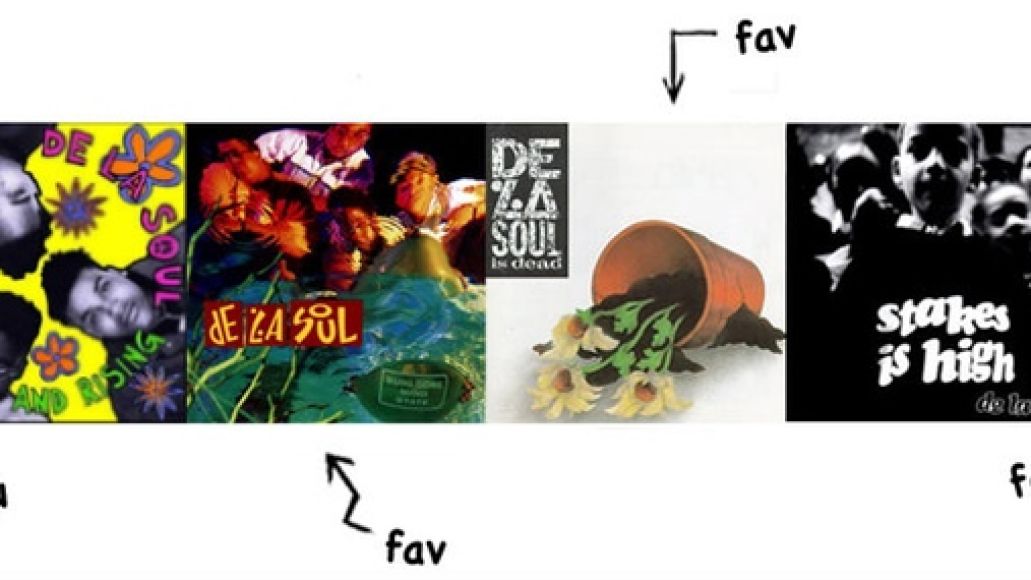 The gamble paid off in record time. Not a day passed after the trio officially launched its Kickstarter campaign in March before they exceeded their fundraising goal of $110,000. To date, they’ve raised over $400,000 from more than 7,500 backers with 16 days still left to go in the campaign. For their generosity, fans stand to reap rewards including thumb drives loaded with the new record, dinner with De La, a Skype session with the trio, a chance to go shopping with one of the guys, and any number of perks in between, depending on how much they choose to give.

“I think the concept of people getting involved in a project, especially one that involves people who actively support its creation, that’s a great thing,” Dave said. “We knew we had fans out there. We know our fan base. We know how large it is. To hear and see the comments and see the support, it’s a good feeling to know that the plan is working, like, ‘We are really doing this.’ We’re doing this with the people who have stuck around with us from day one.”

De La wasted little time getting back to the studio after achieving their goal; they’ve already laid down tracks with Byrne and 2 Chainz. At this point, there’s little telling exactly what And the Anonymous Nobody has in store, which is all part of the fun. But music aside, the trio has already created something bigger than a record. They’ve made a statement about artistry and independence in the 21st century, proving you’re never too old to go back to the well in search of new sources of inspiration. Nearly three decades into a groundbreaking career, hip-hop’s most artful troubadours are reassessing the ground they first broke in 1989.

“I think the campaign brings us back around to this point of innocence, which was really special with 3 Feet High and Rising,” Dave said. “Just not knowing what the industry is about and just going in and recording music. I think this is doing the same thing. We don’t know what this [Kickstarter] world is and how we really do it. We’re innocent all over again trying to make something happen that we’ve never done before. It’s come around full circle — it really has.”