In 2004, Okkervil River was on the brink of giving up. The indie rock group formed in 1998 after singer-songwriter Will Sheff, bassist Zach Thomas, and drummer Seth Warren met at boarding school in New Hampshire. The three uprooted to Austin, Texas, played SXSW, gained a few members, and soon had two studio albums to their name, 2002’s Don’t Fall in Love with Everyone You See and 2003’s Down the River of Golden Dreams. The follow-up album, 2005’s critically lauded Black Sheep Boy, became their crowning achievement. From a distance, it looks like a natural progression towards fame. However, as Sheff recently sat down to tell us, it was far more than a struggle to create. It was the band’s last chance at making something worth sharing – and the record that would determine if they should even bother making music at all.

“We were sleeping in the van on the streets of San Francisco,” Sheff said about his life following the release of Down the River. “I was completely broke. In order to continue doing the band, I made the decision that the only way to afford it was to give up the idea of having a home. I didn’t have anywhere to stay on earth. Friends let me stay in their guest rooms or couches, but I was a drifter.”

While Okkervil River was in the studio working on Down the River, Sheff was obsessing over the work of folk icon Tim Hardin, particularly “Black Sheep Boy”, a song about heroin relapse caused by a visit to his family. Captivated by the songwriter’s instrumental palette and unbarred honesty, Sheff considered re-titling the album Black Sheep Boy, but later decided to wait to flesh out the theme fully on a new album.

Since Okkervil River had an element theme going at the time — Don’t Fall in Love was earth, Down the River was water — fire was next on his list (2007’s The Stage Names tackled air). It fit perfectly. “I was going through this really tumultuous, on-again-off-again, messy, strange relationship at the time we entered the studio,” said Sheff. “It’s this feeling of, ‘I know I’m fucking up, leave me alone.’ That song has a theme, an A-B-B-A rhyme structure and melody, and makes those three words seem literal. Those three things combine to unlock something in me that had to do with Tim Hardin and had to do with me and had to do with the anger I was feeling about the world.” He paused for a moment, apparently out of fear that his words would oversimplify the topic. “It has to do with where I was at that time and why that song illustrated it.” No matter how hard he tried, he decided there are too many contradictions, tangents, and unknown variables to properly explain what it meant to him. Ask any fan, though, and they’ll rattle off a list of cathartic realizations from the record.

When Okkervil River began rehearsing Black Sheep Boy, Sheff slept in a shack — the same one where they practiced during the evenings. “They tried to put air conditioning in it, but it was so poorly insulated that it all blew out the walls. We would play in there in T-shirts, shorts, and flip-flops. Then they would leave, and I would try to sleep on an air mattress on the floors, and they were covered in cockroaches and rat shit,” he said. Meanwhile, he worked at Vulcan Video, a “classic, minimum-wage video job” every day. “I remember walking in and going, ‘Does anybody want to leave?’ because of course they do. You’d always get a shift that way. I would frequently say to people, ‘If nothing happens with this record, I’m just going to quit. I can’t continue to do this.’”

After spending weeks practicing the album’s complicated songs, like the sprawling “So Come Back, I Am Waiting”, the band finally went to record with producer Brian Beattie. Today, he’s built a beautiful studio. Back then, it was a garage. Enormous cracks in the floor revealed cables snaking through, a massive chewing gum sculpture clung to the ceiling, and rats constantly scrambled past their heads. “He eventually had to poison the rats, so they died in the walls of the garage. It smelled like death in his studio,” laughed Sheff. “Those songs are the smell of hot death.”

Beattie was so thrilled about Black Sheep Boy, he let Okkervil River record the rhythm section inside his living room and guitars in his wife’s garden shed. “The thing I remember most is when we did ‘The Glow’, a song on which I do keyboards. Everyone was in the same room and had been drinking red wine,” said Sheff. “There was a happy, red wine glow that we were all feeling. What you hear on that song is totally live except for the string arrangement. It was magical.” Over the course of those five months, Beattie took excellent care of them. Considering Sheff would do a recording session, run across town to work at the video store, haul himself home to smoke a joint, and pass out only to do it all again the next day, Beattie’s kindness truly shaped, and likely saved, the album. 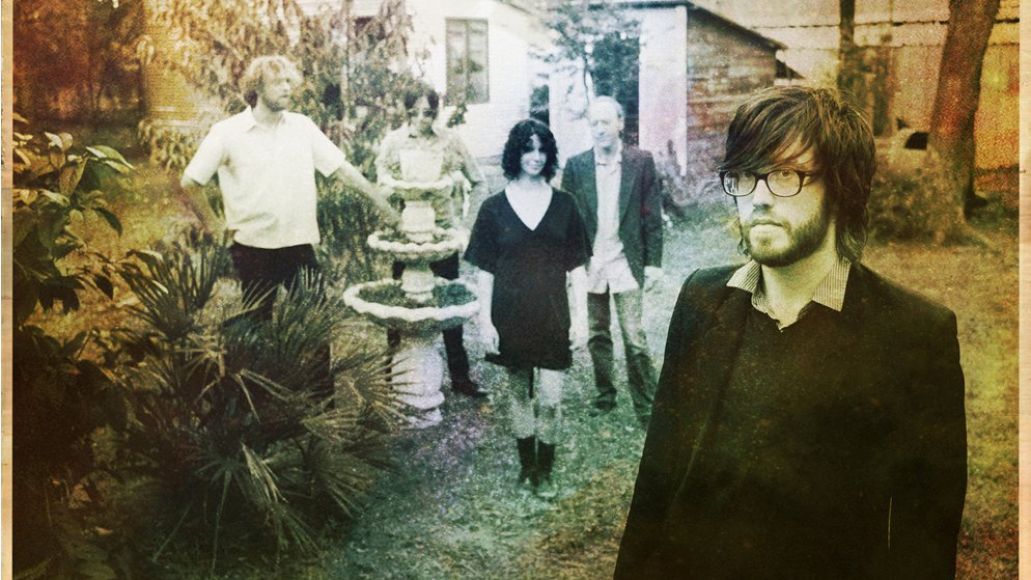 Black Sheep Boy is stuffed with witty wordplay and detailed plots sharpened by Sheff’s anger. Though it’s a lyrically driven album, the vocals never overpower the instruments. “Who gives a shit if my lyrics are good if the music doesn’t have a good melody? You need to have a full body. Otherwise this huge head is toppling over with a tiny, shriveled body,” Sheff explained. “A lot of times I go back and think, ‘God, there’s so many fucking words, man. Why didn’t you just shut up?’ But sometimes you re-listen and think, ‘You did it! You did it, man! You got the right balance!’” On Black Sheep Boy, that meant pining over Scott Walker and Serge Gainsbourg’s timeless orchestrations, ultimately finding a way to let simplicity win.

The group’s hard work didn’t initially pay off. “I would get replies from press saying, ‘Pass,’ ‘Don’t like it,’ ‘Nope, not going to review it’ every day,” recalled Sheff. After promising he would give up if the album failed, he was terrified. Months passed slowly before the band’s tour with The Decemberists kicked off and one glowing New York Times review put them back on the radar. Then Pitchfork included Black Sheep Boy on their list of 2005’s overlooked records. Suddenly, everybody wanted to get on the train. Okkervil River had finally found its spotlight.

By that time, the band had totally changed. Founding members Warren and Thomas left for family reasons. “It felt so different, like I was trying to hold on to my high school buddy version of the band,” said Sheff. The band members audiences saw onstage weren’t the same ones who had spent their shaken lives making this album. “Howard Draper is an incredible musician and has colossal contributions. Seth Warren, our original drummer, was a big part of the way that record sounds. Zach Thomas, our original bassist and one of my best friends in the whole world, brought so much to that sound. Travis Nelsen, obviously, is truly amazing, and people know he’s a big part of it. Brian Beattie is a true genius. The other musicians that played live with us later on are incredible. I deeply value what they brought to the band. I just want people to know that these original guys did an excellent job, too, and they deserve those pats on the back as well.”

Arguably the most overlooked aspect of the album is Warren’s transition into electro-acoustic composition. He manipulated field recordings he had taken in Berkeley, California, emailing clips of household chimes and broken water pumps that he had slowed down and reversed. Woody guitars were mixed in with ‘80s synthesizers and old-fashioned samplers. The most surprising part of it all was that they recorded Black Sheep Boy on ADAT, a cheap Pro Tools-like hardware device akin to four-tracking onto a VHS tape with no screen. “Whenever I told people, they were like, ‘What the fuck is wrong with you?!’” Sheff laughed. “Brian Beattie is a genius on his own planet. So if you go to that planet, he will use the worst technology but make it sound like a beautiful, organic, analog recording from 1958. He knows the pros and cons of each device and will make your work irreducible as long as you play by his rules.”

When Black Sheep Boy opens with a quiet, heartfelt cover of Hardin’s song, there’s a moment of shoe-scuffing isolation, hopeless dejection, and bitter acceptance. It was an emotionally tumultuous time for Sheff. His ability to pen an album that is both deeply personal and openly relatable 10 years after its release is remarkable. “You can tell a story the way it felt, but not the way it really happened. In doing so, it becomes a little more universal,” he explained. Back then, he kept a diary where he wrote about being depressed every day. “It’s me trying to talk myself down from being really unhappy. The aura of that ended up on the songs. I was freeing an anger so intense that it was almost psychotic, but it was playing in an imaginary landscape where it couldn’t do any harm.

“There are certain people who come out the gate meant to be musicians. They have perfect pitch and great timing and they’re charismatic. God chose them to make music. That was never my path. I’m a specific species of animal. I don’t know what the fuck you would call it, but I’m good at writing, conceptualizing, and being passionate. I had to learn everything else,” said Sheff. “Some people fight evil, teach children, and save the world. I’m a leech that makes artsy crap. What can I do? Ideally, I can make the world prettier, and I can make pain hurt a little bit less. Sadness and pain and unfairness are real. It doesn’t end well for any of us. Life is so ugly. If I have a job, it’s to lighten that load.” Ten years after the release of their concept album, Okkervil River continue to brighten the corners of life’s alleyways, even if Sheff buzzes with a loose anger as he sings. In fact, that rage just makes it all the better.

Life Is Ugly: Okkervil River's Will Sheff on the 10th Anniversary of Black Sheep Boy