Ben Folds has always been a fan of conducting. Anyone who’s ever been to one of his shows has probably seen this in some capacity; the piano man stands up, raises his arms and controls the pitch of the audience as they “ahhhhh” or “ooooooh,” depending on the song. Plus, there have been all those performances with symphony orchestras. It seems that with his new collaborative album with yMusic, he’s indulging this side of himself to the fullest. And the results are probably going to produce mixed opinions.

At the Bowery Ballroom on Monday evening, Folds and yMusic held their fourth in a string of concerts road testing the new material. From the beginning, with the seven-piece New York City orchestra taking the stage for their own “Beautiful Mechanical”, it was clear the crowd wasn’t exactly sure what to expect. Halfway through the song, an audience member lifted a lit lighter and garnered quaint laughter from the crowd. 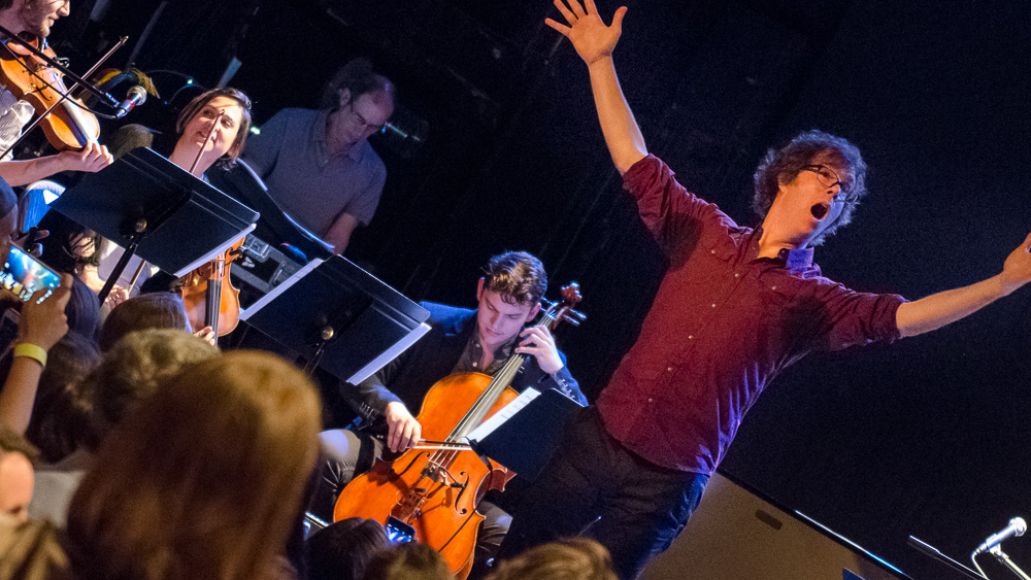 Folds’ fans are used to a bit of zip and pop in their shows, and that wasn’t exactly the name of the game here. Folds came on to solid applause, working his way through the cramped stage to his electric Yamaha piano. “So There” set a pretty even tempo for the night, a mellower experience than what Folds’ crowds have probably come to expect over his 25-plus years in the business. It was a pleasant song, for sure, but it made it clear that the furious key-crawler is not going to be present on this new LP.

But would we expect him to be anyway? Folds has been focused on classic arrangements for the last few years now, and this album is him attempting to blend that with his poppier sensibilities. Where his old self comes out is in the witty, caustic, self-deprecating humorist with a masters degree in harmony. “I see I’ve got more chins than a Chinese phonebook has,” he sang to great chuckles on “Yes Man”. “Not a Fan” was a typically Foldsian highlight, lyrically cutting into people who harp opinions on blog-inflated musicians who reiterate the same unoriginal guitar laziness as the next band. There was a line equating this type of artist to boy-bands that look “cooler,” but I wasn’t fast enough on the transcription. 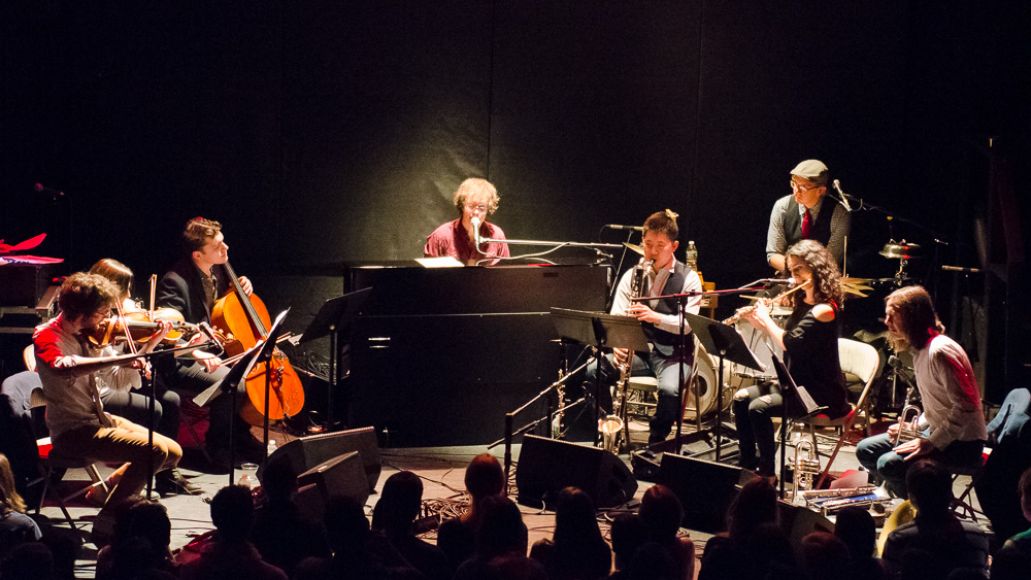 yMusic proved to be a great supporting structure for this new effort Folds has constructed. Horns of all types — sax, muted trumpet, French — added beautiful blares, often in more subtle capacities than on something like, say, “Steven’s Last Night in Town” (which they did play, in what was the most accurate re-arrangement of an older Folds number). The cellist and two violinists were the only strings onstage, outnumbered immensely by the variety of winds and brass instruments the three members on the other side of the stage weilded. Still, their touches on songs like “Not a Fan” and “I’m Not the Man” — a track Folds said was written for Al Pacino to sing in a film, but ultimately rejected (“So it’s not in the movie, but I just wanted to drop the name”) — were some of the more interesting moments of the whole evening. Even the flutists’ backing vocals were spot on.

There are kinks to be worked out, for sure. Folds introduced “Long Way to Go” by saying if he didn’t mess it up, it’d be a first; of course he jinxed himself and slipped up within five notes to much laughter, mostly from himself. Perhaps most of all, the sort-of-super group needs to figure out exactly how to put the umph into the new arrangements of Folds’ solo and Five material. 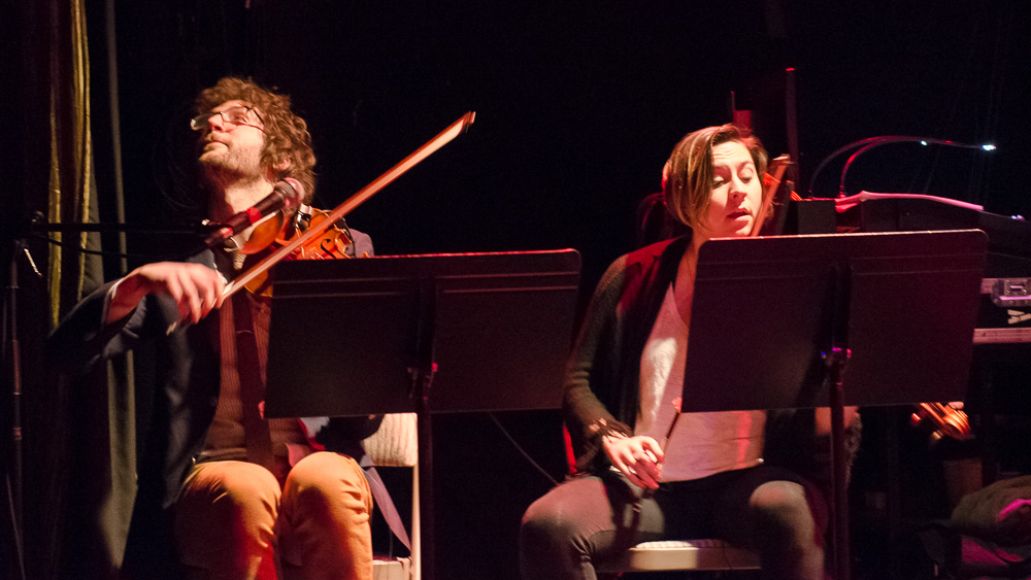 Songs like “Cologne” and “Mess” worked well simply because of the pace they were written in originally. On the other hand, tracks like “Erase Me” and, most disappointingly of all, “Annie Waits” felt severely underwhelming. The latter especially lacked the urgency that made it such a great standout on Rockin’ the Suburbs, an album full of standouts. Part of that was probably due to how Folds left the singing largely up to the crowd, which seemed to throw off the band’s timing and cohesiveness just a bit.

It wasn’t all a loss, of course. “Effington”, for example, was actually elevated by the plucking strings and a lovely flute. One of the better Way to Normal cuts, it felt like it reached even more of its potential with yMusic behind it. Folds came out solo to start the encore with “Best Imitation of Myself”. He was joined by a single violinist and yMusic’s drummer for “Underground” and seemed to notice the magic of the three-piece’s sound (imagine Ben Folds Five, but with a violin in place of the bass). That’s why “Zak and Sara” worked so well, but having it come before the full crew came back for “Annie Waits” just highlighted how off some of the older material felt. 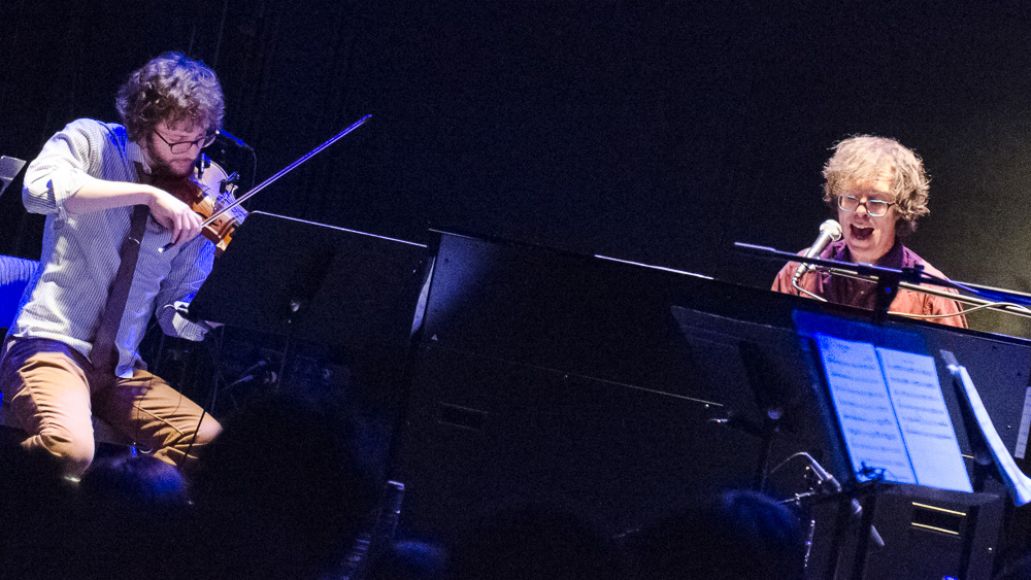 Hopefully it’s something they can work out, because it’s easy to see the potential of this collaboration. Oddly enough, it was most evident during a strange piece of improvisation. Folds had joked early on about a sexually-oriented hashtag that had been started for yMusic’s cellist; someone picked this up later and called out, “I’ve got a new hashtag for the flute player!” However, Folds only heard a bunch of mumbles and then, “Flute Player!” Suddenly, it became a lively Baltic jazz number, Folds leading the band through a series of chord changes and solos, with the crowd providing the vocal call of “the flute player!” It all clicked like magic. Sure, it was hysterical, but also pretty damn good. Like, so good you hope Folds remembered what the hell happened and finds a way to record it as a B-Side. It even led to a “the flute player!” chant instead of the normal calls for an encore, and the flutist indulged with a shy, little solo spurt.

It’s clear Folds has a knack for this conducting and orchestrating bit. If he can do it by the seat of his pants, there’s no reason he can’t be successful at it on record and during a full live show. So while fans shouldn’t expect the oddball pop of previous efforts, there should be plenty to find interesting in this often beautifully arranged chamber pop. And the lyrics are still there, too. He’s figured out how to blend his old style with his new palette; he just needs to work with yMusic to really nail down the reverse engineering of his old one.

Setlist:
Beautiful Mechanical (yMusic)
So There
Long Way to Go
Not a Fan
Effington
Mess
Music in Circles (yMusic)
Yes Man
I’m Not the Man
Erase Me
Cologne
Capable of Anything
Steven’s Last Night in Town
Not the Same
Encore:
Best Imitation of Myself
Underground
Zak and Sara
Annie Waits
Army
You Don’t Know Me