While many were observing two of the holiest holidays this past weekend, I attended an entirely different sort of service in a venue that was more crypt than cathedral. Among stone walls, wooden pillars, and rusted chandeliers in one of Atlanta’s most well-known concert halls, The Masquerade, I had the privilege of seeing Liturgy, whose fascinating album of experimental black metal, The Ark Work, came out earlier this year.

Letting my strobe-wary girlfriend hang out in the back of The Masquerade’s smallest room where the show would take place, I walked up a bit closer to the stage just before openers and fellow Brooklyn natives Sannhet began. Some funereal doom was being played through the speakers as the band set up.

They began with the title track from their newest album, Revisionist. In true post-rock form, the band was dimly lit via a projection of grainy moving images splashed across their faces (and the back of the crowd’s heads). Only during the peaks of their songs was the band illuminated by onstage lights, and Christopher Todd’s translucent orange drum set would burn brightly. From time to time, strobes would wash the band and audience alike in kinetic light. Despite all this energy onstage, though, the crowd kept a more somber disposition, and truthfully, this is the sort of set I’d expect from Sannhet. Their brand of post-rock, while heavy, remains very much reflective, rather than reflexive. 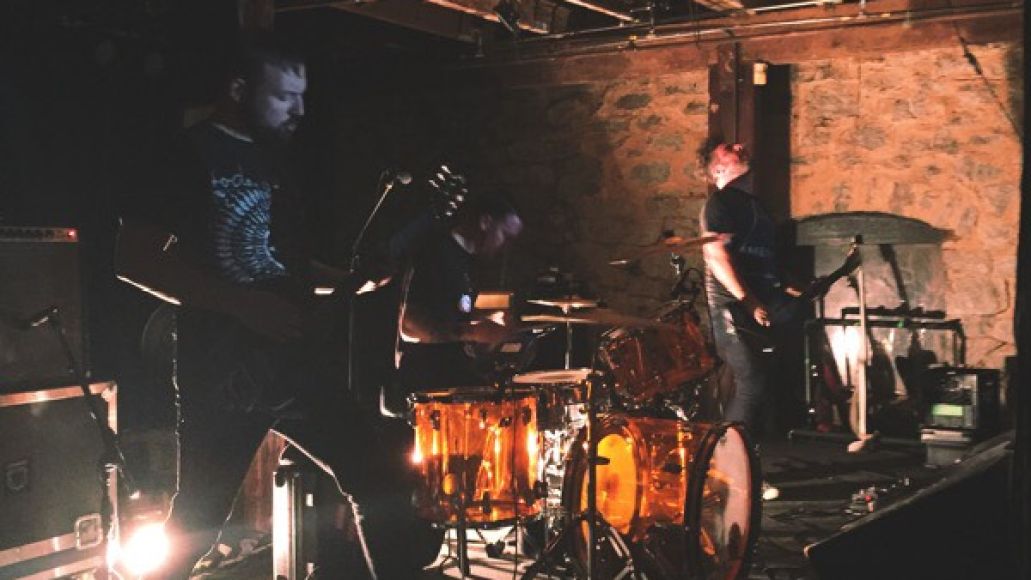 After about half an hour of continuous playing without audience interaction, Sannhet thanked the crowd and left the stage. Liturgy set up quickly, and sounds of filtered and droning bagpipes beckoned the audience to the stage. They began their set with “Follow” off The Ark Work. From there, and with little flair to distract, Liturgy put on a show with precision and grace that would be expected from a band with such a unique sound.

Where I expected blinding gold and white lights and fog machines, I found simple lights pointed on each of the modestly dressed band members and a fiery fluorescent splash across the wall once again thanks to that translucent orange kit where drummer Greg Fox reigned. Sounds that I had anticipated to come from pre-recorded samples of chimes, horns, and bagpipes ended up being easily facilitated through guitarist/vocalist Hunter Hunt-Hendrix’s effects pedals. And while Hendrix’s vocals could hardly be understood at any point during the night, the sonic intricacies of Liturgy’s music could still be heard even in the immense amount of noise.

After a 40-minute set, the band ended with the powerful Aesthethica track “Generation” and left the stage unceremoniously as the small audience of  head-bangers, bobbers, and stoic onlookers dispersed. Even with the lack of pomp, I left feeling uplifted and lucky for the opportunity to witness what felt like the birth of a musical uprising.