The veracity of a purported photograph of late blues legend Robert Johnson has been called into question by 49 music and history experts. The image can be seen above, with Johnson on the left.

Guitar enthusiast Steven “Zeke” Schein was browsing eBay in 2005 when he stumbled across the picture under a listing titled, “Old Snapshot Blues Guitar B.B. King???” He came to believe it was actually Johnson in the photo, which would make it only the third image of the bluesman in existence, and therefore worth a fortune. What’s more, the other man in the picture appeared to be fellow musician Johnny Shines, a fact that would only add to its value. He ended up paying $2,200 in the winning bid for the three-inch-by-four-inch shot, and eventually reached out to the Johnson estate in 2007 to get the image verified.

In 2008, the estate sent the picture to Lois Gibson, an F.B.I. Academy Forensic Artist Course graduate who was listed as “The World’s Most Successful Forensic Artist” in the 2005 edition of The Guinness Book of World Records. Gibson compared Schein’s image to the two known and confirmed pictures of Johnson, and concluded that, “If the time frame is right, it’s him.”

However, a new study by a group of music historians, writers, producers, and musicians claims that Gibson’s determination is invalid. They note that Gibson only said the image “appears” to be Johnson. “Historical scholarship relies on evidence,” remarks professor of American culture at the University of Michigan Bruce Conforth in the report. “And if you look at the alleged authentication of that photograph there really wasn’t a piece of evidence, there was opinion. Historical fact is never validated by opinion; it can only be validated by evidence.” They also note that Gibson is a forensic artists, not a forensic anthropologist.

To directly combat the claims on the portrait, the study’s authors point to numerous flaws. There’s the left handed wristwatch and the buttons on the wrong side of the suits, suggesting that the images may have been flipped. The outfits themselves appear to be zoot suits and hats that fit more in mid-1940s fashion than the 1930s when Johnson was alive. There’s the fact that “Johnson” is holding his guitar in the wrong hands and it appears to be a prop with no strings or tuning pegs; furthermore, the head doesn’t seem to cast a shadow. What’s more, two men who knew Johnson personally, Robert Lockwood and David Edwards, failed to identify Johnson or Shines when shown the photo in 2006.

Most damning of all, however, is the result of work by forensic anthropologists in North Carolina and Italy. When comparing the Schein image to the two confirmed pictures of Johnson, the experts found inconsistencies. “The authentic Johnson has a differently shaped ear,” the report states, “complete with a visible earlobe that appears to be missing in the [alleged] Johnson. As argued elsewhere in this report, ear shape is a tremendously reliable method of forensic identification, perhaps as accurate, or even more so, than fingerprints.”

In a public comment section, the Johnson estate’s attorney, John Kitchens, refuted some of the arguments made against the validity of the picture. Though he said, “I will not pretend that the Estate did not want this photo authenticated,” he expressed confidence in Gibson’s results. “Ms. Gibson was not hired to study the significance of left-sided vs. right-sided buttons or stripes on a tie or a ring on a finger or strings on a guitar,” Kitchens wrote. “She was hired to analyze distinct facial features – the things that don’t change based on the type of film used, etc.”

Whether or not the image is ever proven beyond a doubt to be real or a forgery, Wald laments that the controversy overshadows the music not just of Johnson, but of the era he came from. “If it’s a fact that that is a picture of Robert Johnson then it’s worth a fortune. If it’s of any one of a hundred really, really good singers or guitar players of that generation, it’s not worth anything, and that’s kind of sad.”

Below, take a look at the original, unrestored image in question: 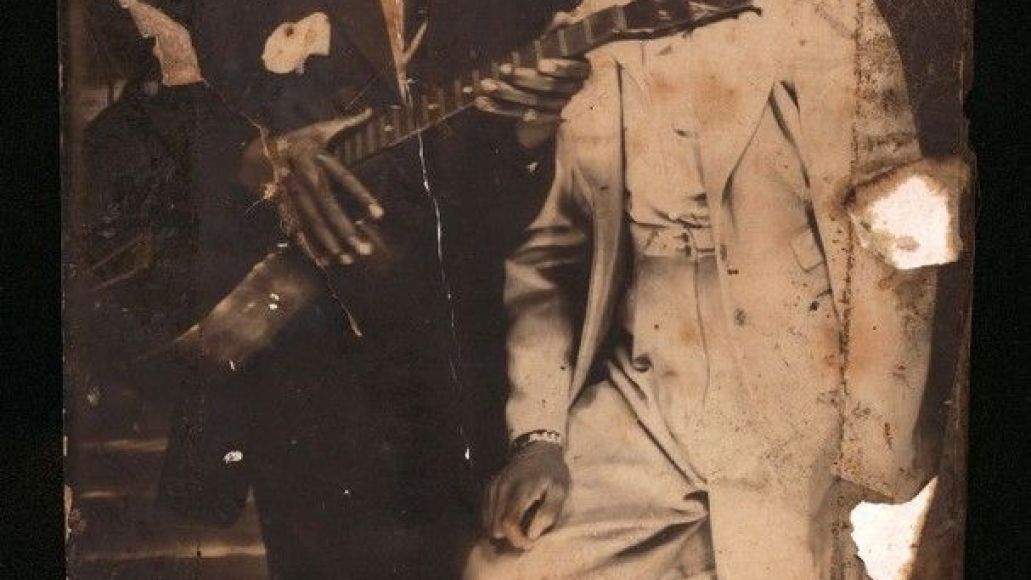