Punk rock was never really meant for gaudy rooms like Atlanta’s Tabernacle, but Billy Idol has never been an ordinary punk rocker. On Tuesday night, the singer’s multi-faceted, genre-hopping career was celebrated with an extensive setlist that culled together his early bad boy days in Generation X to the all-excess, delightfully tacky, and infectious ’80s arena pop that made him an international phenomenon. It was readily apparent within the first 30 seconds of the set that, even at the age of 59, Idol still commands attention and adoration with colossal magnetism and sheer visceral (and now all-natural) energy.

An extra eager full house crowded Atlanta’s historic church-turned-music-venue, fueled by the contagious curiosity that typically pushes people to revisit icons of the past: wondering if they still got it. For most in attendance, it didn’t seem like their first time seeing the legend in the flesh, although there was a smattering of youth amongst the mostly Gen X and Boomer crowd. The night’s performance marked the first of a quick run of makeup dates, following Idol’s postponement of a string of dates earlier this winter due to a chest infection, and as promised, the band arrived energized and ready as ever to entertain.

Storming the stage, Idol implored, “Can I make it happen once again” during the galloping and reminiscing opener “Postcards from the Past” (from Idol’s 2014 album Kings and Queens of the Underground) before declaring, “my future seems wide open, and tomorrow’s never broken,” curling his lip once again and inciting roars throughout the Tabby with a snarling, trademark “come awwwnnnn!” 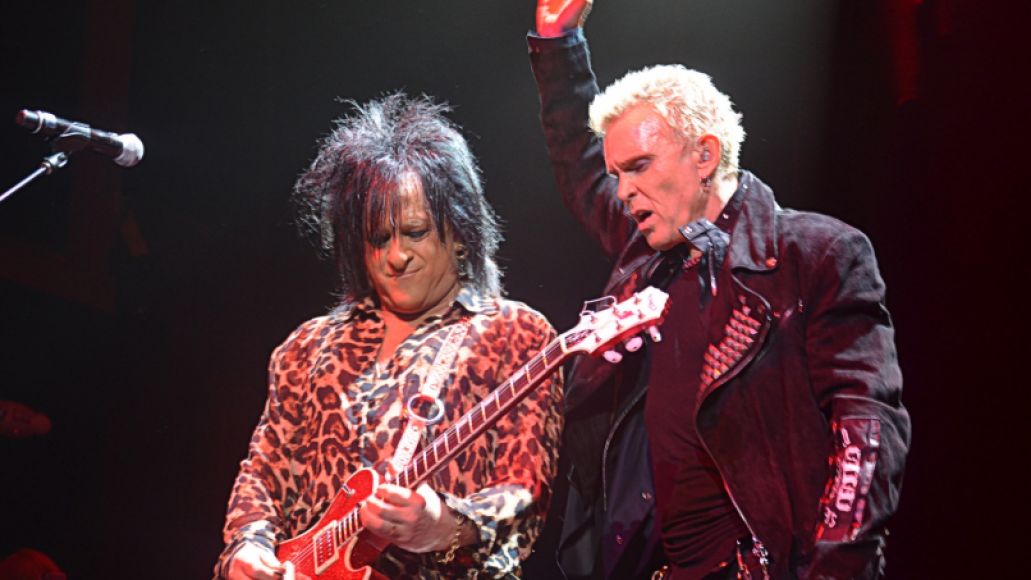 Steve Stevens, Idol’s lifetime wingman on guitar, flanked the singer throughout the night, though he also enjoyed plenty of moments alone in the spotlight. The same went for drummer Erik Eldenius, keyboardist Paul Trudeau, mountain man badass bassist Stephen McGrath, and rhythm guitarist Billy Morrison. Still, it was abundantly clear from the get-go that Idol undoubtedly savors being front-and-center for his legions of fans, which is what likely motivates him to stay in immaculate shape and continue to keep a busy touring schedule.

It didn’t take long for Idol to go shirtless, and fittingly, Idol chose “Flesh For Fantasy” as the first opportunity to show off his midsection and there was no shortage of crotch-grabbing for the platinum-haired frontman. NC-17 tongue wags were also not in short supply, including a never-before-seen-by-these-eyes maneuver through the gap of a tambourine during the synth-driven hard rocker “Blue Highway”. I suppose few can pull such a move off these days.

For the first 30 minutes of the set, Idol gallivanted around the large stage without taking a breather. At last, the singer stood still for a moment, strumming an acoustic through the Leonard NImoy-inspired lost hit “Sweet Sixteen” as Stevens showcased his nuanced able-fingered style while sporting a glam-perfect coiffure. 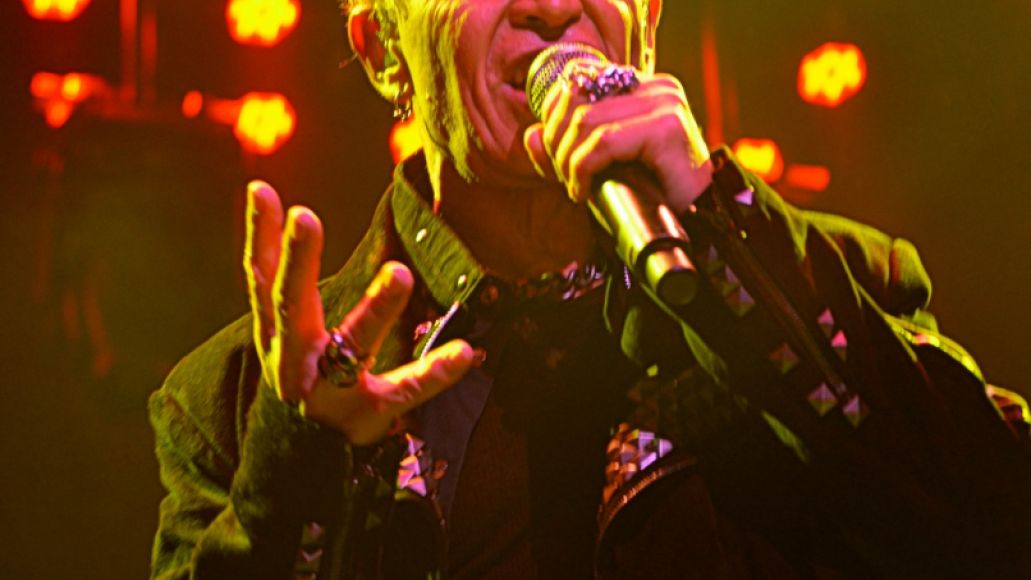 Fittingly, Idol’s breakout hit from three decades ago, “Eyes Without a Face”, brought the first major frenzied response of the night, and, it was at this moment that I saw a soused woman led out of the crowd by security in a bra. This was the first of a handful of over-emphatic audience members to get nudged out of the floor level a little early on a night overflowing with fine people-watching. Fans apparently come ready to have a good time at a Billy Idol show

A staple cover of The Doors “LA Woman” ended with Stevens quickly channeling the orchestral sounds of Lindsey Buckingham and Jimmy Page (Stevens teased a few Zepp riffs) before emulating a Pete Townsend windmill. Later, Idol whipped about 30 frisbees into the crowd (he would later sign a few onstage, and toss out some setlists and drumsticks to nearby fans) and waved goodbye to the crowd after shaking the walls of the old 2,600 seat Baptist church with “Rebel Yell”. The performance ended with Idol proudly flexing on his center stage platform and sporting his whiplash smile.

Not surprisingly, the crowd-stirring encore included “White Wedding” and the immediately recognizable (and catalog-anomalous) massive hit cover “Mony Mony”. On the latter, Idol’s trademark refrain of “Hey motherfucker, get laid, get fucked” helped the buzz in the hall crescendo once more before a massive drum solo. At this stage in his career, Idol is an ageless marvel, with stage presence and raw energy that rivals today’s loudest and bravest rock and punk acts. 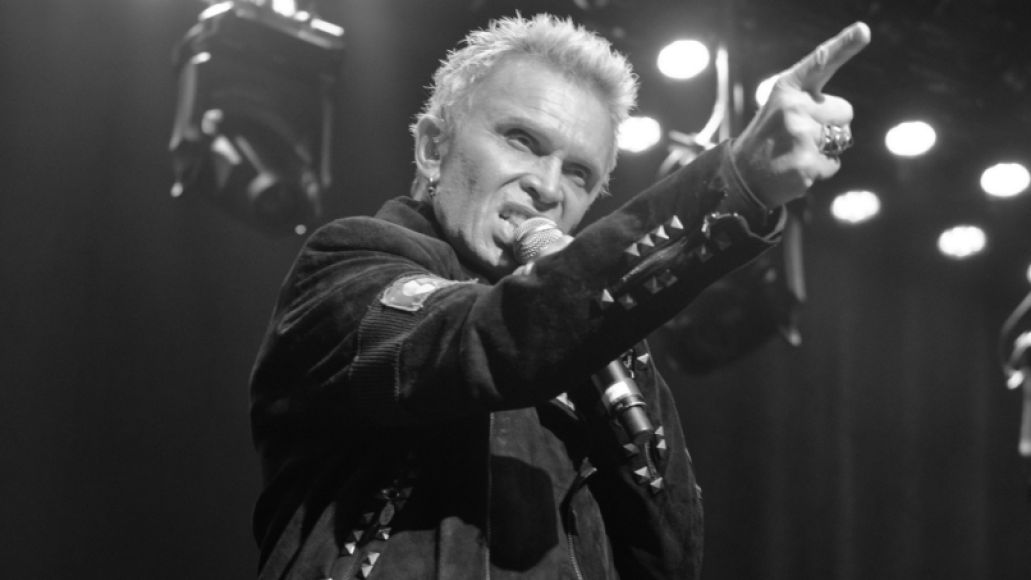 Even the post-show band introductions wowed the audience, as Idol showed off his still-strong vocals with a Michael Buffer-esque sustained shout of “Steeeeeve Steeeeeeeeeevens” before exclaiming “I’m Billy Fucking Idol” and exiting the stage following nearly two hours of letting loose in Atlanta. As the crowd shuffled away with cement smiles, it was clear that Billy Idol, after all these years, gives 110% to ensure his loyal fans get their money’s worth. 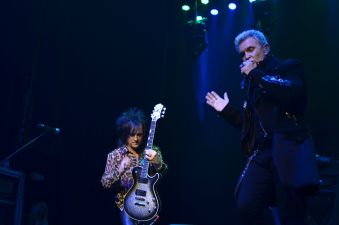 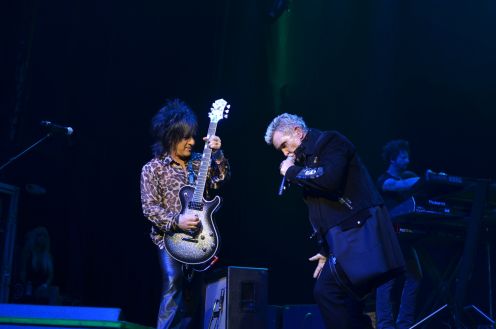