The familiar stink of sweat and beer gave way to an unusual scent inside the Concord Music Hall in Logan Square on Thursday night. Planter by planter, hundreds of living flowers were brought in to fill the stage. As the last stragglers of the sold-out crowd packed into the ground floor, a handful of roadies, dressed all in white, groomed the venue from its dark club default into a cell of light and color.

Faith No More played Chicago last night for the first time since the late ’90s, this time in support of its first new album in 18 years, Sol Invictus, which follows 1997’s Album of the Year. While Sol Invictus sounds like Faith No More never hung up its peculiar offshoot of alt rock, the band was happy to let the hits overshadow their new material. They played “Epic” and “Midlife Crisis”; they even encored with “We Care A Lot”, the breakthrough single that found a home on MTV in 1988, before Mike Patton had joined the band.

They’ve found a spiritual, if not musical, kinship with their tour openers, Le Butcherettes, who riled up the early crowd with dramatic flair. Frontwoman Teri Gender Bender sang through a sequined scarf she wrapped around her head, gesticulating like a dictator over her mirrored Telecaster. The band all wore red with silver instruments, like a punk rock army sent to sweep away our last shreds of boredom. When Teri stage-dived during Le Butcherettes’ final song, she clawed through the crowd like she was swimming against a current before rolling on her back and floating back to the front.

Le Butcherettes had their share of fans to sing along with their choruses, but the Faith No More contingent was bigger and more anxious. They wanted to see a band back from the dead; first, they saw a group of muscular strangers arranging flowers on a white stage. Even the Marshall stacks were wrapped up in white cloth, the logos barely embossed through the fabric. More and more flowers came out while people chanted the band’s name. It seemed like it’d never stop. 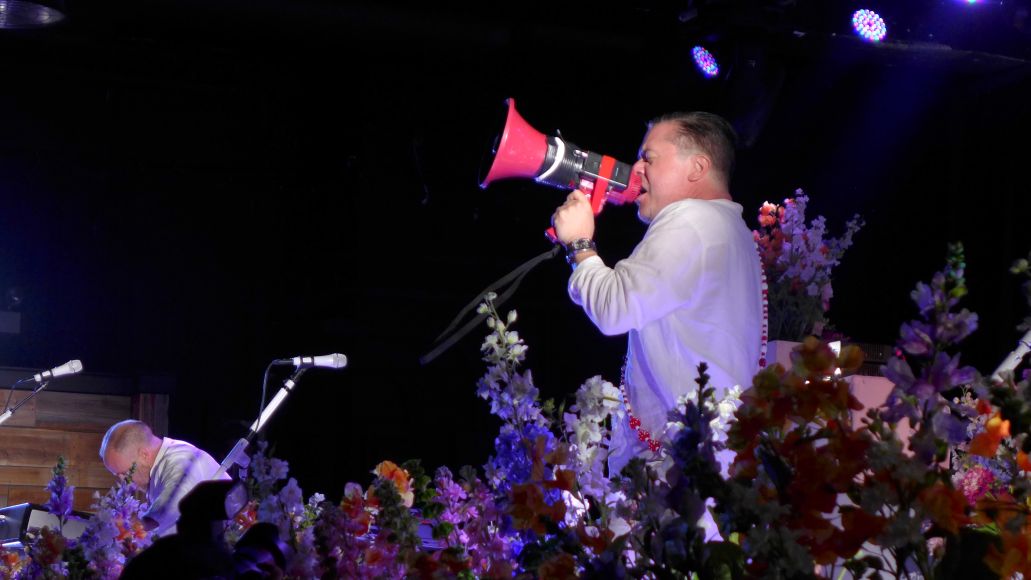 Faith No More has always occupied a niche seat in the rock pantheon. They are a Mike Patton project, at least since 1988, when the singer doubled up on his Mr. Bungle duties to lend vocals to the band. They use funk bass and metal progressions in their hits, and they have deep cuts that play more like easy listening ballads. Faith No More is an exhibit of pure and athletic musicianship as much as it is a vessel for Patton’s unquenchable character.

Mike Patton sang into a microphone last night. He also sang into a repurposed police radio, complete with coiled black chord, and a red megaphone with a microphone seemingly built in. Sometimes he would hold his normal microphone up to the mic-equipped megaphone, screaming and screaming through layers of amplification. He had a small effects rig set up on a white music stand near the front of the stage, and he’d tweak pedals on his voice the way a guitarist would. The voice is an instrument, of course, but few people play it like Patton.

Patton can do death metal growls, and he did; he can croon and shriek and bellow from the bottom of his gut, and he did. He has one of the most elastic voices in American music. Dressed in all white with a string of red beads, he pounced around the stage with his longtime bandmates. He’s the kind of frontman who’s more interested in amusing and being amused by his audience. Faith No More’s primary emotion is power, and Patton offsets that musical megalomania by cutting dumb jokes. He had a running gag about hitting on a fan in a Behemoth T-shirt that he called “Mr. Fuckable.” This is the band that posed someone in a gimp suit in their latest round of promotional photos; they’ve never been shy about sex or its absurdities. 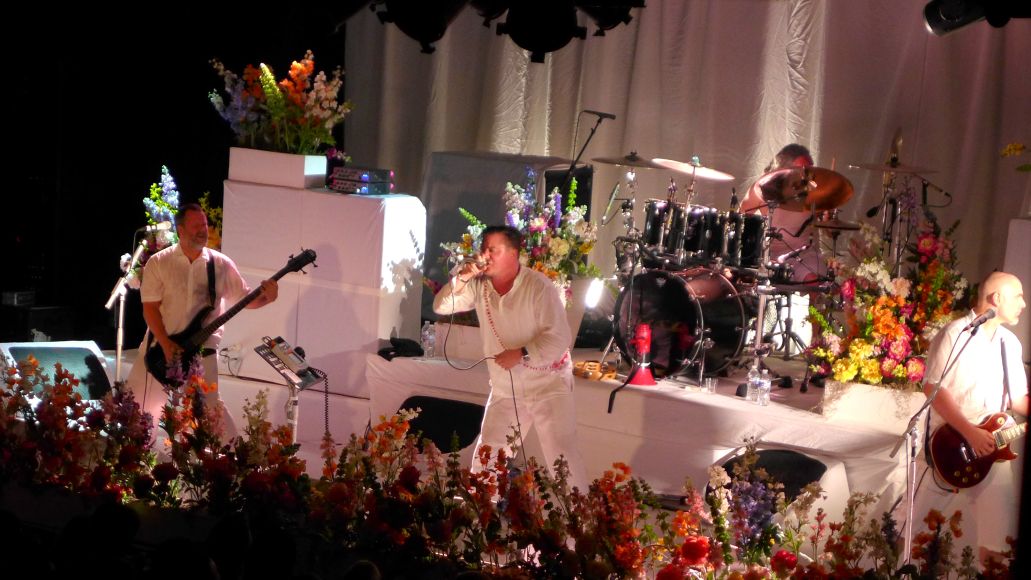 Patton is a singer first and a frontman second, but he still goaded the crowd into singing an entire chorus of “Midlife Crisis” before launching into a lounge act rendition of the same song. If you’ve ever wanted to hear funk metal’s most solid radio single as performed by a tropical wedding band, Faith No More offered a glimpse of just that. It was a gag but a well-rehearsed one; with Patton, drummer Mike Bordin, bassist Billy Gould, guitarist Jon Hudson, and keyboardist Roddy Bottum, the band is a tight knot of seasoned professionals. There is power in how they work together, pounding through every beat with labored precision.

Faith No More’s never without its fun. They played the best song ever written about Scientology (“Land of Sunshine”), but also covered “Easy” by the Commodores with more relish than irony. They closed their encore with “I Started a Joke” by the Bee Gees. Their own songs are streaked with darkness but also irreverence, and they thrive at the intersection of the two. They find power in their odd corner, and for the first time in years, they’re sharing it.

Setlist:
Motherfucker
Land of Sunshine
Caffeine
Evidence
Epic
Sunny Side Up
Get Out
Midlife Crisis
Last Cup of Sorrow
The Gentle Art of Making Enemies
Easy (Commodores cover)
Cuckoo for Caca
King for a Day
Ashes to Ashes
Superhero
Encore:
Matador
We Care a Lot
I Started a Joke (Bee Gees cover)