Reviewing a band after their first-ever live performance doesn’t exactly strike as a fair proposition. After all, there are nerves to contend with, general unfamiliarity from the audience, and uncertainty about reception. For LÁ-BAS’ show at Brooklyn’s Baby’s All Right, none of this was really the case.

The members of the group each have an impressive pedigree all their own. Taking the stage Tuesday evening were musicians who had played with The War on Drugs, St. Vincent, The Shins, MS MR, Guided by Voices, and even ’90s favorites The Cardigans. Frontwoman Angelica Allen comes from My Midnight Heart, and bandleader Nathan Larson is a noted film composer and former member of post-hardcore outfit Shudder to Think. So much for having nerves; if you can play behind David Byrne, you can play to a small club of folks in Brooklyn. 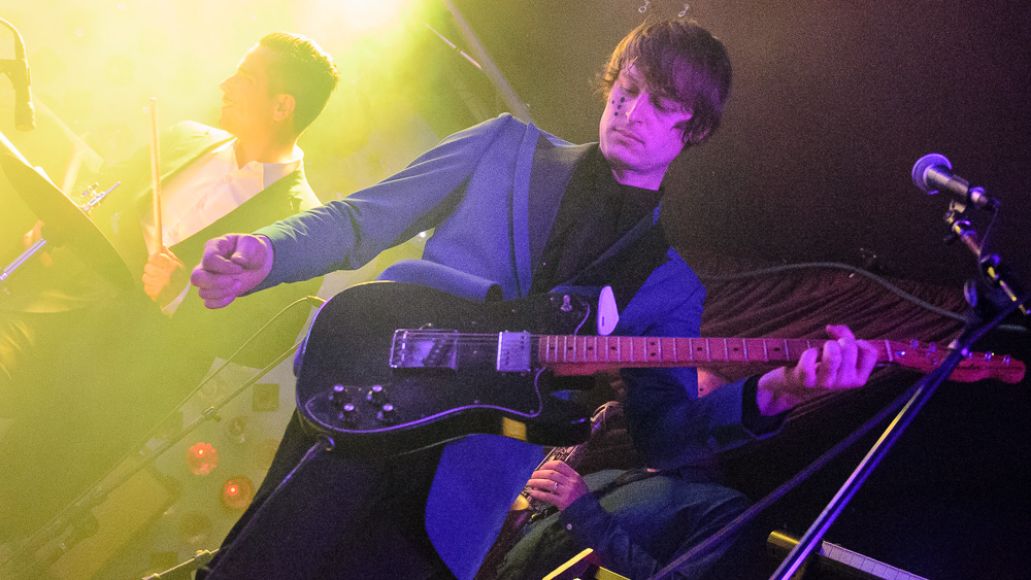 As for general unfamiliarity, singles like “Give ‘Em Your Good Side” and “Be Afraid Baby, Be Very Afraid” have been making the blog rounds for a few weeks now, and their self-titled debut record has been streaming for the last week via SPIN. Besides which, from the way the band members milled about post-show and the limited numbers of those in attendance, there was a feeling that many there were friends of the musicians. “Yeah, that guy’s feeling it,” Allen said at one point, before she gave a closer look and added, “Oh, I know that guy.” Still, I doubt everyone in the crowd was so intimately connected to those on stage, and surely there were those who had yet to hear the full record. In general, however, if you were there, you likely weren’t walking blindly into the show.

So that just leaves reception. It’s hard to dislike what LÁ-BAS is putting out. Despite being self-characterized as “dystopian,” there are feel-good vibes pulsing throughout their future funk “transmissions.” Even when the themes are less than sunny, like the social injustice tackled on “City’s Under Fire” or the cautioning against users in “Be Afraid Baby, Be Very Afraid”, the songs are loaded up with sturdy guitar lines, interesting synth zaps, and some undeniably smooth horns. Twice Allen asked if the crowd would be okay with slowing things down, but even “Surveillance Rock” has enough slickness to keep things steadily floating on an energetic breeze. Only slightly behind Larson’s licks and the horn section’s blasts, Allen’s voice is a keen highlight of the band. It seems almost infallible, nary a crack or missed key to be heard. Even as she flipped her long braids or disrobed/re-robed as the temperature demanded, she hit every mark. (Larson, it’s worth pointing out, had the lyrics in front of him and still managed a slip or two. No shade thrown, of course, as it’s only their first go-around.) 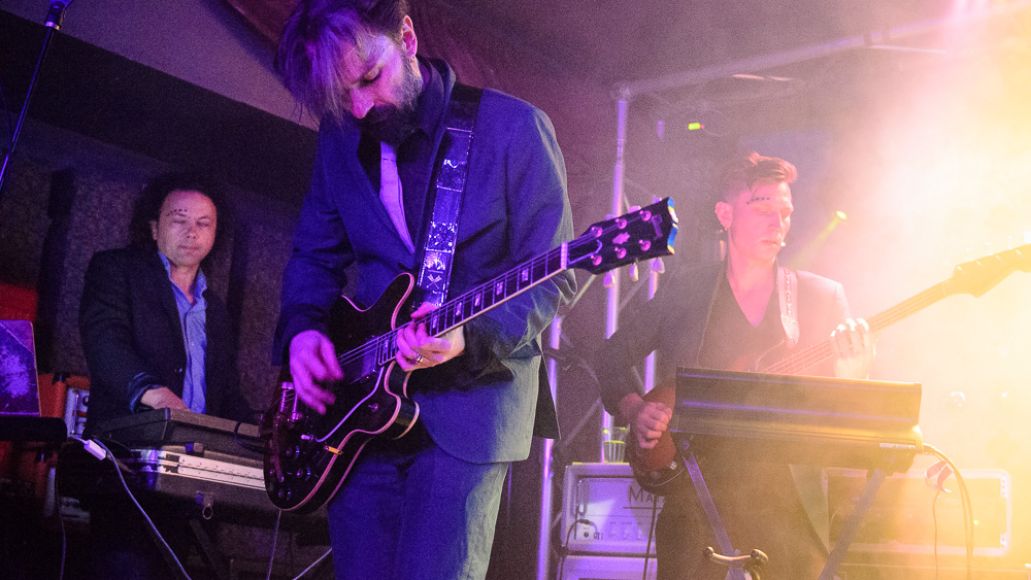 Perhaps the most disappointing part of the whole show was actually the audience themselves, who didn’t make as much use of the space around them as they might have for a band they were more familiar with. (Or, maybe if they were less of a stereotypical shiftless New York crowd.) There was a steady group of body-movers stage left who grooved along to the fine lines the band laid out, but with all that open floor, you’d think the tunes would’ve inspired more to dance. Folks were shaking throughout, no doubt, but LÁ-BAS wants a dance party — Allen repeatedly called for life from the attendees — and it would’ve been nice to see how they responded to one. It’s possible that the uncrowded space actually hurt the party vibe, as you can imagine people being more embarrassed when they’d stand out more readily. Still, even the most shy of patrons can’t ignore a cover of “I Wanna Be Your Lover” at a funk show, so it’s no surprise that song had the most tail feathers shaking.

In their matching blue suits and dotted face paint — “We’re representing a tribe of … somewhere, doesn’t matter,” joked Allen at one point — the band certainly understand the atmosphere they want to project, and they pull it off admirably. They’re extremely comfortable in it and have a lot of fun performing together. While that may not be a particularly remarkable idea for most bands, these 11 performers aren’t going to be doing this all that often, so it’s noteworthy that they came together so well. “Not everyone up here is from New York,” Allen pointed out near the end of the set. “So it’s really great that we could all be here together.” Of course, her sentiment was meant to include those in front of her as well as those by her side. 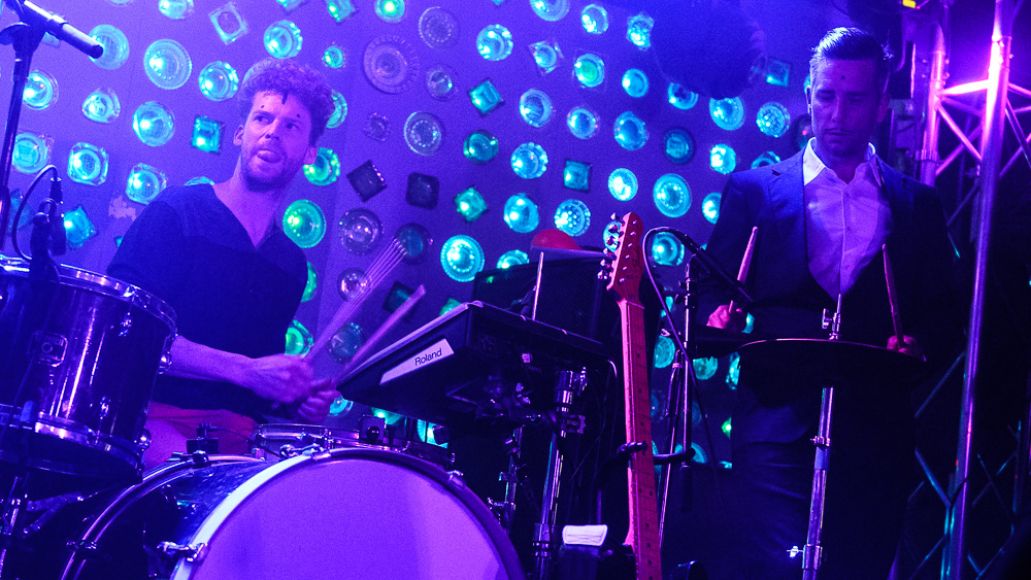 Watching a band full of veterans in a situation that, in a way, reduced them all to first-timers was an interesting experiment, especially since they were playing with a genre they’re not known for individually. There was a fun contradiction in those facts, as well as an equally fun presence in the band itself. It’s unlikely this project will ever become a full-time focus for any of the individuals involved — they’ve got plenty of other prominent activities to keep them occupied. How far they’ll actually take this thing is anyone’s guess at this point, but while they’re here, it’s a damn good time and well worth the evening out. 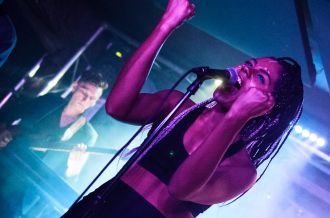