There is very little neutrality towards Sweden’s Little Dragon. You either love them or you hate them. But if you’re of the former, you’re going to be deeply invested. Just go ahead and ask the likes of Damon Albarn, José González, DJ Shadow, and/or Big Boi, who all repeatedly insist on having vocalist Yukimi Nagano’s presence on their record. Why? Because her voice registers deeply within the subconscious of any listener, and the absence of her vocals burns.

Such is the aftermath of any Little Dragon show, and their performance Friday evening at Chicago’s Concord Music Hall was no different. Following their emotionally charged set, audiences walked into the balmy city nightlife with the heightened realization that the world is, in fact, not always filled with high vibrato, or keyboard wizardry, or even diamond-shape lights for that matter. It’s a sad feeling and, yeah, the comedown is pretty intense. 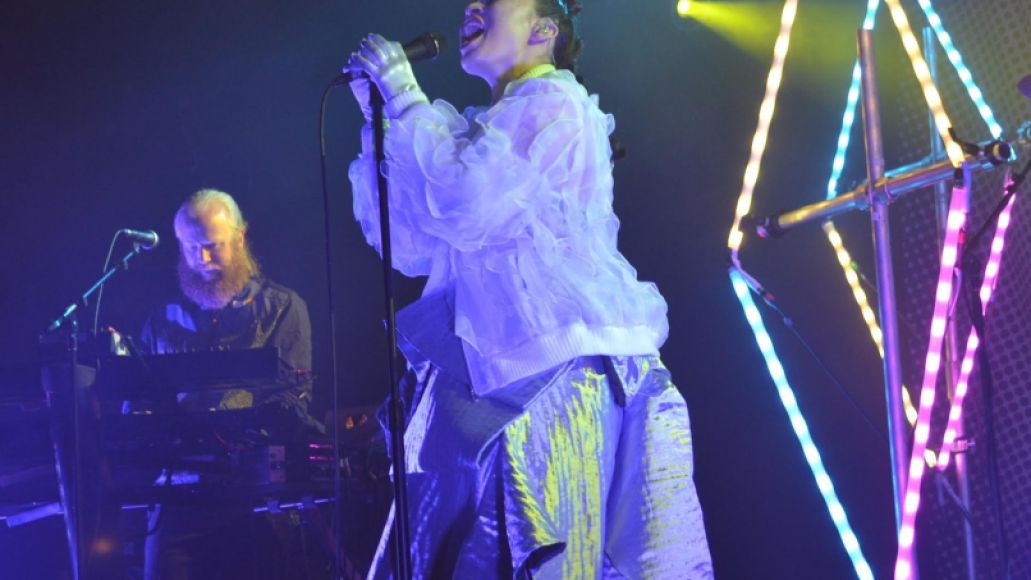 Nevertheless, Nagano, drummer Erik Bodin, bassist Fredrik Källgren Wallin, and keyboardist Håkan Wirenstrand brought the early summer heat to the Concord with ritualistic solos and wildly invigorating body movements. (It’s no wonder Nagano took a breather from the stage mid-set.) She wasn’t the only one having fun; one highlight of the night was watching Bodin literally dropping his bass after climbing the PA system and jumping down for “Shuffle a Dream”

Security had fun with that one.

But about that absence again. It’s a feeling that not only fans have but artists, too. Let’s rewind the clocks back to 2010, when Gorillaz first released Plastic Beach — an album that crystallizes during Nagano’s work on “Empire Ants” and nearly climaxes later on during her second appearance with “To Binge”. That Albarn decided to spiritually bookend his album with Nagano (and, let’s not forget, the great, late Mr. Bobby Womack) hints that she’s a talent who’s impossible to shrug off.