Eight years is a very, very long time for a rock and roll band, music venue, and city. Before Friday’s proper tour opener, My Morning Jacket hadn’t paid a visit to the Classic City since March 2007’s “World’s Best Prom” shows just down the street at the legendary 40 Watt Club. As it goes, a whole lot has changed at the Georgia Theatre for Friday night’s hot-ticket headliners and in the city of Athens in general.

For starters, the Georgia Theatre burned down in 2009 and gloriously rose from the ashes 26 months later to proudly stand again as one of the most beloved music venues in the country (and recently changed ownership in August 2014). Since 2007’s “between tour” (post-Z and pre-Evil Urges) brought them through town, My Morning Jacket released Evil Urges, Circuital, the critically-acclaimed LP The Waterfall, headlined Bonnaroo and ACL, played New Years Eve at Madison Square Garden, and were immortalized as cartoons on an episode of American Dad. In 2007, the hottest bands on the Athens music scene were R.E.M. (inducted into the Rock Hall that year), Widespread Panic, Of Montreal, and The Whigs. Nowadays, scenesters are buzzing over bands like Futurebirds, Reptar, Muuy Bien, and Grand Vapids. 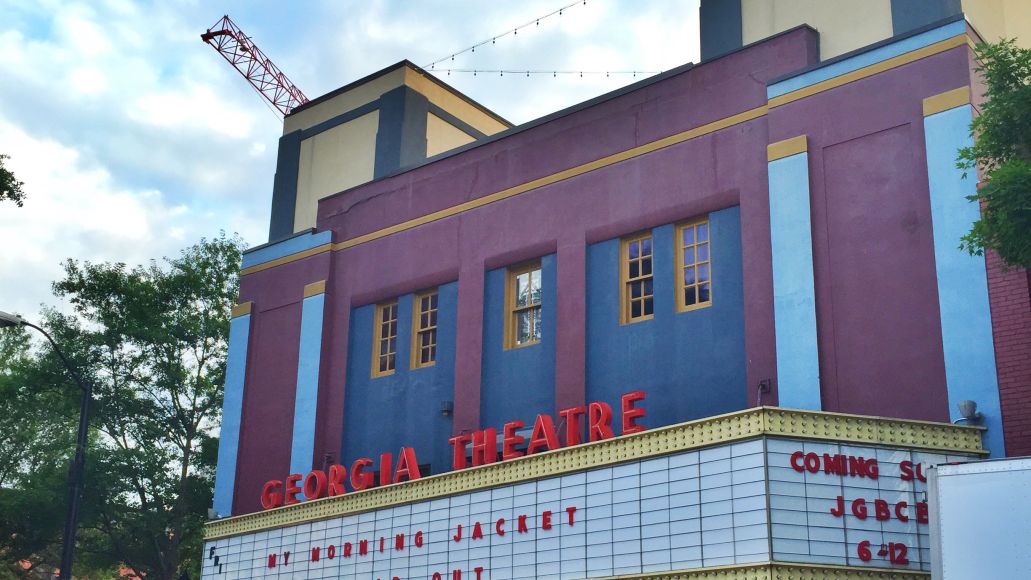 Needless to say, times have changed, but the decision for My Morning Jacket to kick off The Waterfall tour with a huge underplay (Georgia Theatre: 1028 capacity) in this quintessential American cultural hotbed felt like a reward to the venue and city for continuing to evolve and maintain musicultural relevance through the years (or perhaps it was just good routing around their festival headline at Hangout this weekend, maybe both?). The fans’ response to the surprising booking? This show sold out in mere seconds and was perhaps one of the hottest concert tickest in the southeast to date in 2015.

At the strike of 9:05, the lights fell, roars lifted up the room, and a jazzy intro played the Kentucky quintet onto the stage. Alas, the anticipation to hear all these new songs for the first time in a live setting was over, and, to the surprise of a few, the anthemic tune about the importance of faith of any kind, “Believe (Nobody Knows)”, opened up a new era.

It was apparent early on that 2015’s version of My Morning Jacket is not your older brother’s band, but the changes aren’t necessarily a bad thing (although last night’s show was about 10-15 minutes shorter than recent tours). While Jim James has a relatively more austere stage presence and isn’t whirling around the stage like he once did (after a well-chronicled array of injuries), the band’s focus and continuously advancing musicianship makes up for any lack of kinetic motion that used to add a visual flair to the performances. 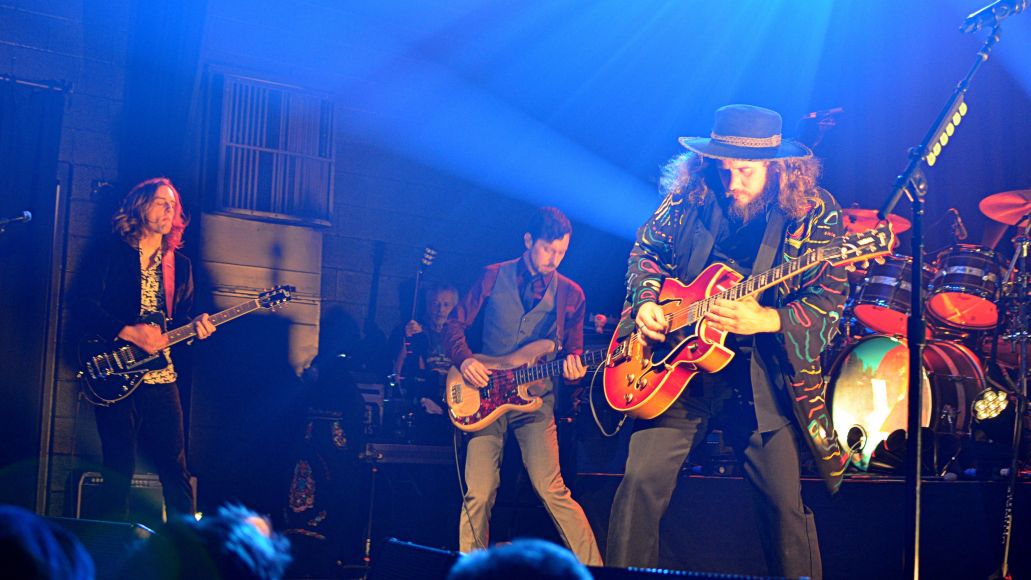 Bassist Tom Blankenship and Patrick Hallahan are feeding off each other and as locked in as ever; there’s a prevalent, refreshed emphasis on exciting, focused improvisation and a handful of fresh-sounding segues (“Knot Comes Loose > I Will Sing You Songs”) breathed new life into some of the older tracks. Moreover, older songs with no extended improv forays were given added muscle (hear the room-shaking breakdown of “It Beats 4 U”), and sense-altering psychedelia made its way in when MMJ pulverized the melodic boundaries and structure of “I Will Sing You Songs”, taking the decade-plus-old tune to a new, exciting dimension.

As is the case on the record, eight of the 10 Waterfall songs that were played (“Get the Point” and “Like a River” were the only omissions), and a more cohesive five-headed musical beast than ever before appeared; the democratic musical process that brought these songs to life in a Stinson Beach studio bubbled to the surface on the small Theatre stage.

With the exception of the noteworthy “In Its Infancy (The Waterfall)”, “Gideon” (from Z), and “Only Memories Remain” (in a live setting) segment of the show, the rest of the Waterfall tunes were played in pairs, a concerted choice by the band to try their best to maintain the attention of both newcomers and the generally demanding older fanbase looking for deeper cuts. Despite not being one of the early releases from The Waterfall, the deceivingly mellow psych-soul “Thin Line” got the vocal recognition of a solid portion of the audience before Carl and Jim layered room-swelling blankets of classically tuned riffs. An overarching sentiment among fans new and old, The Waterfall is a winner for most, and fans are excited to hear new tunes, a change for some of the more cynical fans from the last two album tours. 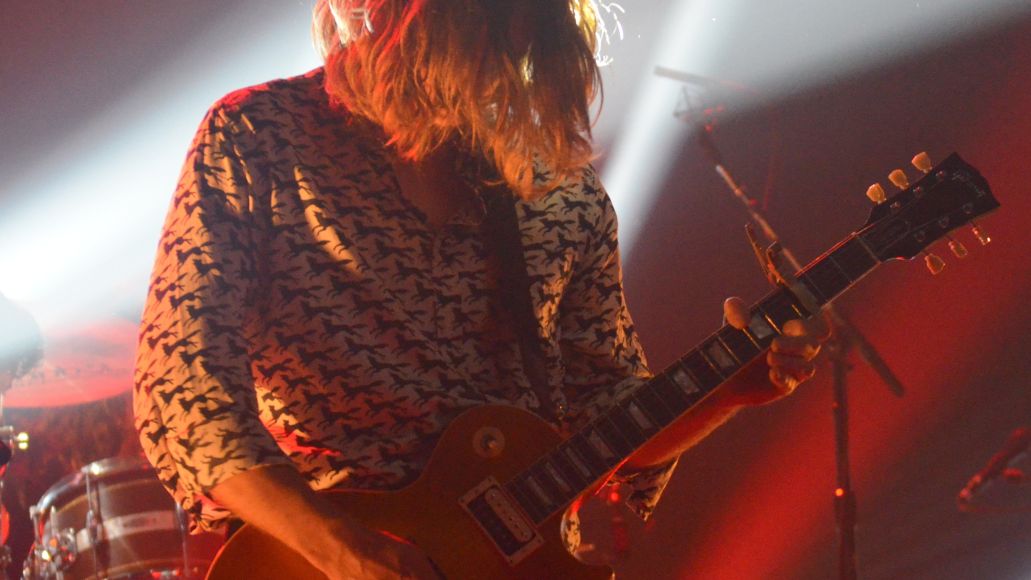 It should be noted that it was announced hours before the show that the tour opener would also be the first show marking the band’s revived “Spontaneous Curation Series,” allowing fans to request deep cuts through various forums. The likely two cuts selected were “Heartbreakin’ Man” from their ’99 debut, The Tennessee Fire, and the very rare “Knot Comes Loose”, an oft-forgotten, but resplendent cut from 2005’s Z. Both tunes are as lyrically strong as any in the MMJ canon and fit the flow of the mellower early portion of the show well.

“Wordless Chorus”, the staple psych-pop one-off from Z, conjured everyone’s inner vocalist before the strobe-laden, disco synth-funk of “Touch Me Part 2” shook the place, as James proved magnetic again, donning his blue cape and dancing like a shaman at an ayahuasca ritual. 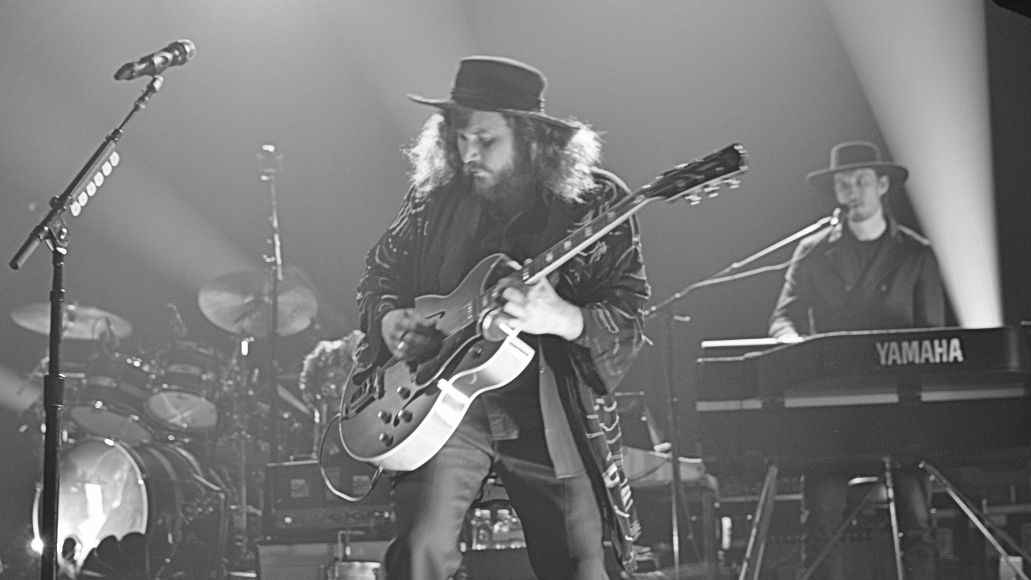 The new Zepp-infused “Tropics (Erase Traces)” opened the encore, summoning the dark demons that wondrously haunted the Z-era. Eerie, visceral and unnerving, “Tropics” is high on the list of tunes that will likely remain a staple in setlists for years to come. Fittingly, next was a song about rebirth, and the celebratory, vernal new tune “Spring (Among The Living)” re-elucidated a heightened mood that sustained through the jammed-out “Phone Went West” and show-closing classic rocker “One Big Holiday”. As a finale, Patrick Hallahan was finally given a chance to showcase his wealth of talent and boundless energy, as the wildly flailing heartbeat of MMJ led the band through a few drum-charged instrumental refrains to sign off.

Last night was a treat for the lucky who got to go, marking the beginning of yet another exciting new chapter for one of America’s most important rock bands. While not on a level with some of the epic live odysseys that are recounted like tales of Woodstock or Monterey Pop by MMJ diehards, this tour opener proved that My Morning Jacket is as well-oiled and inspired as ever and ready to make some distinctly fresh memories for fans nationwide in 2015 and beyond.

**You can already hear and download a crisp audience recording of last night’s show here.