If I had a penny for every time someone uttered “Nickelback is so bad, it’s criminal,” let’s just say I’d be halfway done paying off my college loans by now. It’s a phrase often said dramatically or in jest, but apparently our friends down under mean business.

Last night, shortly before Nickelbag’s gig at the Brisbane Entertainment Center in Boondall, the local police department tweeted out a warning, saying: “Men matching this description expected to be committing musical crimes in Boondall tonight.” The announcement was accompanied by this lovely sketch: 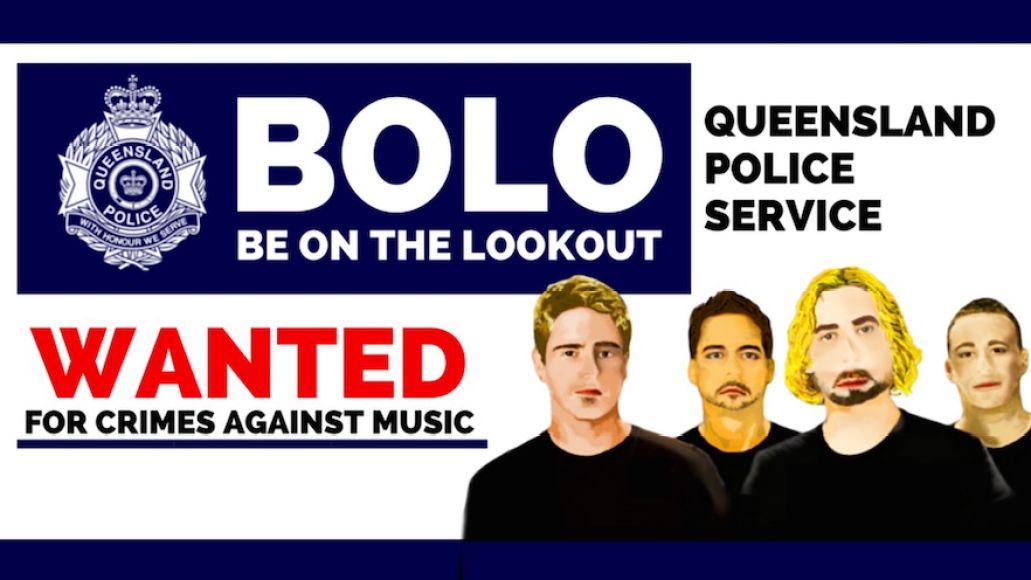 The APB is part of the Queensland Police’s BOLO (Be on the Lookout) program and emphasizes that Chad Kroeger and his Canadian pals are wanted for their “crimes against music” — no doubt very serious offenses, seeing as how the warning sits between legitimate stories regarding shooting incidents, large-scale drug operations, and road safety. Here’s hoping the cops were able to nab those perps; considering the fact that the alt rockers have been known to have No Fixed Address, though, I wouldn’t be surprised if they were already on the run. Someone ought to question Avril Lavigne ASAP.

The US might have some sympathy for Nickelback, and maybe not all of their songs are terrible (nor are their lyrics completely dumbed down), but the Queensland Police are certainly not alone in their suspicious sentiments. Recently, someone launched a campaign to prevent the band from playing in London.

Nickelback wanted by Australian police for "crimes against music"