It’s hard to fathom a time when Jack White didn’t sit atop of music’s Mount Everest as the most pivotal, divisive figure in rock and roll. However, in 1999, Jack and Meg White were still relatively unknown commodities upon releasing their self-titled debut. Case in point: this absolutely hysterical review posted to Amazon.com by a fan named Adam Beales months after the release of The White Stripes.

In disbelief over the lack of attention the album was receiving, Beales penned a highly enthusiastic argument in favor of The White Stripes. Over the course of 535 words, Beales delivers incredible metaphor after incredible metaphor, invents words, and takes shots at Led Zeppelin, all in support of his favorite new rock band. Among the choice passages:

“What we got here is a boy, a girl, a guitar, a rudimentary drumkit, and a Led Zeppelin fixation like the Aswad High Dam. You take all that, you stuff it through the rama-lama-fa-fa-fa with more cheap speed than a normal ninth-grader can handle and you will most definitely get you somma that WHITE STRIPES.”

“They got what the eggyheads like to call ‘Dynamics’. It means that they can kinda lay back like a little kitty cat sometimes, affore they jump up and rock yer flabby ass all to hell. (I’m not talkin’ about all that malajusted EMO sh!t either.”

“The side-two opener (vinyl, baby, it’s gotta be) “Broken Bricks” is likewise AOK, just a-buildin’ and a hollerin’ until it EXPLODES all over the place at the end like Ron Fugg’n Jeremy.”

Read the review in full below. It also still lives on Amazon.com. 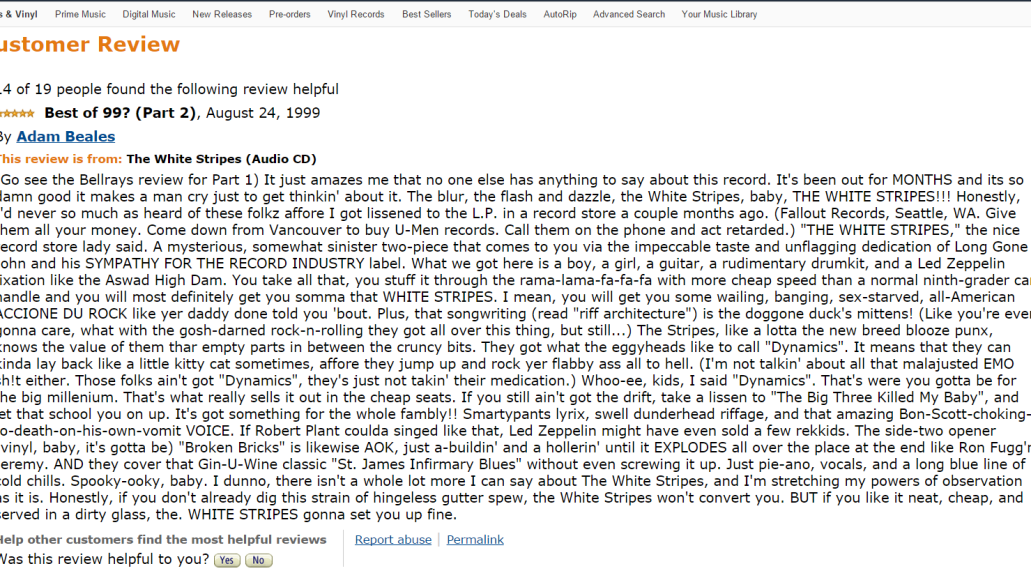