Somebody, turn up the John Philip Souza! No, that’s too high. Well, now it’s too low. A little higher. Little more … good. Wait, now forget the whole thing. That’s the music for Monty Python’s Flying Circus. We apologize for the inconvenience and will have the appropriate parties sacked.

This article will have been completed in an entirely different style at great expense and at the last minute (clears throat).

Monty Python and the Holy Grail at 40

Brought to you by the 40th anniversary of Monty Python and the Holy Grail, this piece will be written by, produced by, and starring: 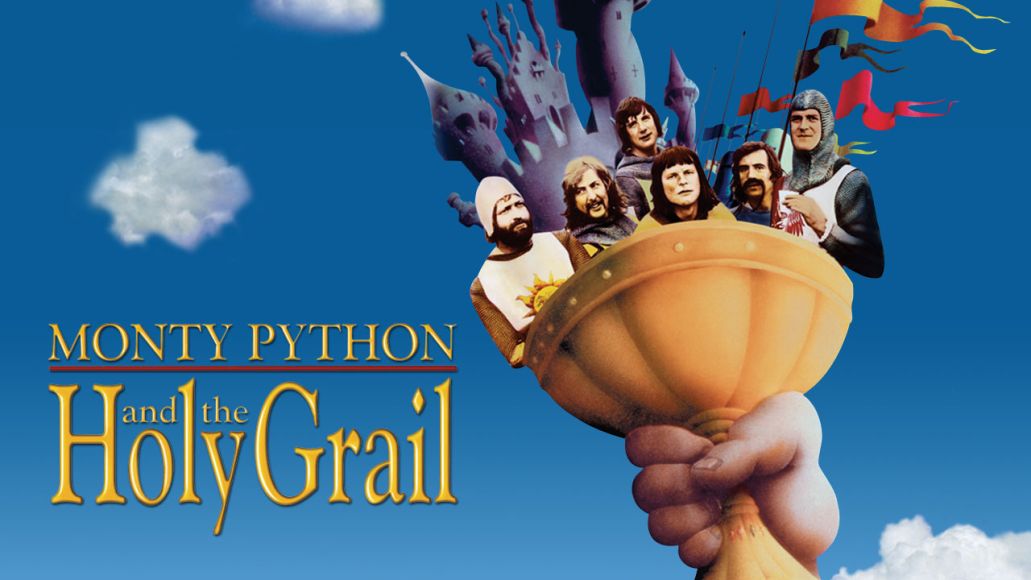 Blake Goble (BG): Now. Since we’ve gotten that little bit of silliness (a shameless attempt at Pythonian humor from two Chicago writers) out of the way, welcome to our 40th anniversary roundtable about Monty Python and the Holy Grail, one of the funniest films of all time.

To celebrate, we’re looking back at the film, as well as Monty Python’s legacy today, and discussing just why we find things like clomping coconuts still so very, very funny. Witches and Camelots and French taunts, oh my. Hags and rabbits and Black Knights, oh dear. Holy Grail was the first and arguably finest film in Monty Python’s oeuvre. Or rather, the funniest and most memorable flick from Cleese, Jones, Idle, Palin, Gilliam, and Chapman, those daffy geniuses from London. It’s a wild and witty romp in the woods, playing on old studio adventure film stereotypes, using music and gore as means to make one of the most accomplished works of silly comedy around. Now I’ll stop with the hyperbole before I get turned into a newt.

I’ve watched this film dozens of times, quoted it like the nerds in “Homer Goes to College” (hehe, ni.), and even saw Spamalot before it went to Broadway and was curiously disappointed by the repeated material. Give me an old lady beating a carpet with a cat and Terry Gilliam in grotesque makeup any day.

Dominick Suzanne-Mayer (DS): It’s hard to talk about Holy Grail without touching on the very reason we’re still talking about it four decades out: the infinite quotability. It’s the rare comedy where hearing the lines ad nauseam for years before seeing it, or even after, in no way affects the quality of the film. In all its absurdism, it ended up forming much of the basis of what most mainstream comedies in the modern era lust after: repetition, cultural ubiquity, an ability to find people in any part of the world who can also chuckle when one or both of you demands a shrubbery. Holy Grail stands as one of Python’s finest hours because of its absolute accessibility, as much as anything; where a film like Life of Brian will divide with the bleakness of its humor and its very deliberate religious polarizations, Holy Grail is just silly in the way that came to be synonymous with Python.

If we’re talking favorites, and I think that’s probably obligatory when you get people together who grew up on Holy Grail, I’ll actually go with that ending. It’s the perfect iteration of the “hey everyone, we’re all gonna get laid!” punchline, where the film doesn’t so much end as it hilariously reaches a skidding halt after the knights’ quest is interrupted by the paddy wagons. I’m a big, big fan of ridiculous comedies becoming hyper-aware of their own status as ridiculous comedies, and on that basis, Holy Grail is a masterpiece among masterpieces.

BG: There’s that suspicious urban legend about the ending being a result of funding going away at the end of production, but Python was more controlled in their craziness than that. Also, there’s even the consideration (only recently considered by me) that it’s a twist ending, meant to say that these “knights” are inmates escaped from the looney bin finally being apprehended, before they’re nabbed and we get that hard cut to muzak. Yet, I’d never been interested in deconstructing the why, but rather busting a gut attempting to debate whether or not the “why” is worth the hassle. It’s all left field in Holy Grail, right?

DS: The film regularly comments on its own flawed form, and I don’t think it’d be entirely off-base to assume that a lot of comedy fans’ understanding of meta as a concept may have started, or at least passed through, Holy Grail.

It’s part of the very language of world comedy as we understand it today, and it’s also about as accessible a gateway to the wild world of Python as you could ever find in under two hours. It lacks the genuine weirdness (and, perhaps more importantly, the hard cultural specificity) of Flying Circus, but keeps the episodic structure and the delightful penchant for out-of-nowhere bursts of vulgarity of all kinds. It’s all the best of Python in one place. Why do you think it’s stuck around for so long?

BG: In short, yes, memorability. The best comedy always has an element of subversion, of boundaries being pushed. Where Saturday Night Live was hot stuff with modern music and hot-topic humor (that Chevy Chase/Richard Pryor job interview skit that escalates into racial fastballs is still dynamite and daring), Python was interested in pushing the boundaries of form, function, and often good taste. With Python, there’s no classical punchline payoff. The payoff is the bafflement of any given scene, the utter shock of the surreal. The Pythonesque.

In Flying Circus, perhaps its two best skits (“I’m a lumberjack and I’m okay,” and “dead parrots don’t talk”) are like the manuals to understanding the appeal of Pythonesque comedy. There’s still a sense of manners, and decorum, yet interaction is stretched to the limits of plausibility. “Lumberjack” starts one way, with a violent psychopath dreading cutting hair. Then it becomes a confession, as the barber realizes that he’s always wanted to chop down trees. But then best and most kinkily of all, the machismo is really a front, for the barber uses mounties and music as means to sugarcoat his night moves: he likes to dress in women’s clothing and hang around in bars. And that last bit is all in song, and everything about it works: as parody, satire, lampoon, spoof, and a test of boundaries. It’s hysterical. And perplexing, for certain.

How do you map that joke out? How do you pitch those moves and stay on a path?

How does Holy Grail present several knights, glowing with pride for their arrival at Camelot, only to hard cut to a musical number about the famed castle featuring men in dungeons, flying chickens, and abused manservants?

“No, on second thought let’s not go to Camelot. ‘Tis a silly place.”

That’s hysterical! And still wickedly relevant. Who doesn’t want to say no to an invitation to a lame outing and cite their reasoning as “’tis a silly place”? Perhaps it’s the general notion of man’s folly in the face of a fictional grail (something covered quite literally in Gilliam’s later film The Fisher King). Or perhaps it’s a gang of six that just saw Lerner and Lowe’s Camelot and thought it was the stupidest damn thing they’d ever seen. But again, the “why” is tertiary when the Pythons bring such manic ingenuity to the proceedings. The legacy’s there, too. It’s on dozens of “best comedy” lists (Total Film, Channel 4, Empire, Time Out London, and it was added to Britain’s newly developed film preservation registry, curious given that a certain kind of American teen has embraced this as their awkward bible). Holy Grail and its delirium could be seen as the father to the kind of humor found in Mr. Show, The Simpsons, Anchorman, Mystery Science Theater 3000 … basically anything really funny that your mom may think is ghoulish or off-putting.

And that black knight’s flesh wounds were pretty gruesome. Or, or, was it an ingenious riff on “heroics” and self-proclaimed legacy? Or the screams of a man about to get a sword through his freaking face, which onscreen makes for the very best kind of physical humor/shock therapy.

I think we still adore Holy Grail because there are truly so few comedies like it. Ron Burgundy’s lovely conversations with Baxter the dog could be seen as the direct result of Python’s interactions with a murderous rabbit. The Simpsons’ willingness to joke in any direction owes a debt to Python’s breakneck twists in the comic structure department. Hell, the family-loved Shrek may not have been possible were it not for Holy Grail’s gruesome affinity for laughing at the Dark Ages in all their ills and pestilence. We can sing its praises until Arthur and his men find that stupid grail, but it’s a testament to the cult classic’s ubiquity in the comedy canon that we can still sing its praises as an influencer, as well as a really damn funny movie. Those guys committed. No, not murder. To boil it down, on the 2001 commentary of a special edition DVD, John Cleese comments on a very British little moment of Arthur arguing with soldiers atop a castle, and Cleese cackles, “Here we are, two minutes in, and nothing’s happening.”

Yet, by all observations, the film always has something stupid, and really funny, happening.

One thing I will say, though. That spontaneity did not come through in the re-hashed Spamalot from 2005. I’ve been itching to complain about this for years, but Tim Curry is no Graham Chapman, and Mike Nichols directed that play with a winking acknowledgement of the silliness. It was like Python was finally spoiled and spun off as a commodity, and it killed the original a little for me.

Granted, we’re still talking about the joys of Brave Sir Robin, sisters being bit by moose, and holy hand grenades. Perhaps that grenade is in order for the musical.

'Tis a Silly Film: Monty Python and the Holy Grail at 40