“Oh, like Beach Boys.” Those are the first words that La Luz guitarist Shana Cleveland says when I ask her about the assumptions people make when they hear the word “surf” attached to music. She’s not wrong: Poll 100 random strangers, and outside of the few who dig into the likes of Dick Dale and The Ventures, you’ll hear a vast majority cite Brian Wilson’s band. Undoubtedly, you’ll hear about the California sun, sand, hot rods, and, well, surfing. But to La Luz, it’s a “pretty classic sound” that can be plied to their ends rather than an identifying concept.

“I don’t really know what the surf rock culture is, nowadays,” she adds. The four band members crowd around a low table covered in Mexican food — pre-practice fuel. “Some of the songs we play are pretty straightforward surf songs, but I think it’s pretty obvious that we’re not only playing surf rock … It kind of gets annoying when you add a bunch of hyphens, you know, so it’s just like, ‘Surf rock, yeah, figure it out.'” The quartet’s music has been dubbed “surf noir” by some, and that combination does capture how they meld the pop-friendly Beach Boys surf with the shadier, moodier, cinematic version propagated by instrumental surf musicians like Link Wray.

With the Damp Face EP and It’s Alive, both released in 2013, La Luz established their sound, steeped in tradition and yet undeniably alive and fun. A lot of that has to do with the push-and-pull of their music, the way it stretches between tight four-part girl gang harmonies and extended instrumental reveries, taking from both halves of the surf divide, but also from plenty of the “old soul and doo-wop and rock” that they grew up on.

While you won’t likely find the four women behind La Luz — guitarist Shana Cleveland, drummer Marian Li Pino, keyboardist Alice Sandahl, and bassist Lena Simon — on boards off the coast of Seattle, that image coincidentally carried over into the recording of their sophomore album, Weirdo Shrine. After plans to record in Ty Segall’s home studio were scrapped, the prolific guitarist needed a backup plan to produce their album. “He was scrambling to find some type of warehouse for us to record in, and his friend makes surfboards,” Cleveland explains. “You can’t write that kind of thing,” Li Pino adds with a grin. 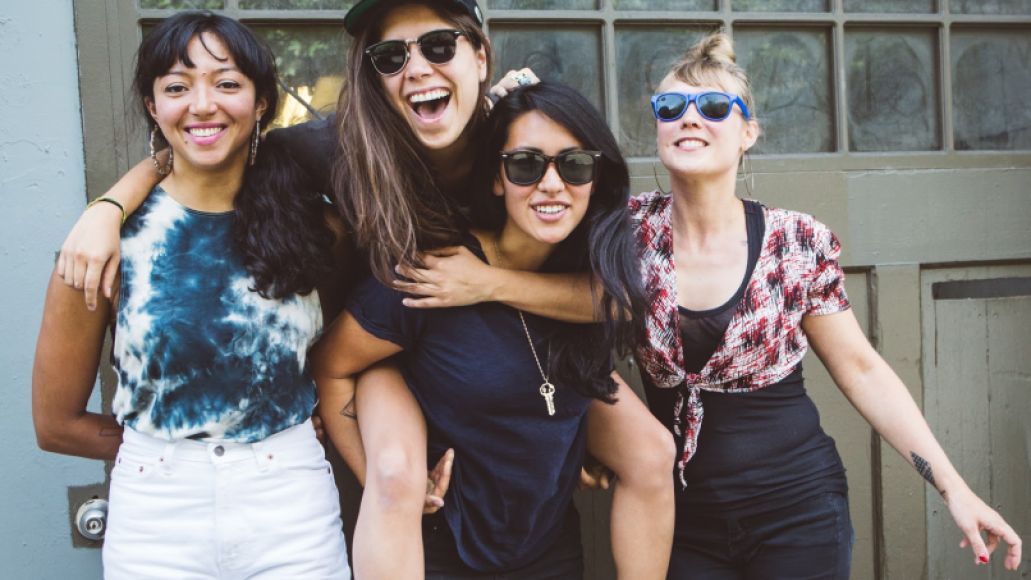 Segall came on board to produce Weirdo Shrine after the group opened a stretch of his tour. “He’s always encouraging us to make our live show crazier,” Sandahl notes. That wildness was something that Segall wanted to bring to the studio as well. His idea was to “keep in some of the mistakes just to make it feel more, you know, sort of live and energetic,” Li Pino explains, adding that he wouldn’t let them be perfectionists the way they had on previous recordings.

Another change was the addition of fuzz. “Yeah, now I have a fuzz pedal,” Cleveland jokingly sighs. “I was reluctant … I don’t like it when I go to a show and I see somebody with a crapload of pedals in front of them, like someone’s got like 20 pedals in front of them or something,” she begins, before turning and apologizing to Simon, who’s no stranger to pedals in her other project, Kairos. “It’s okay, I’m not offended,” the bassist laughs.

Cleveland expounds on her fear of overcomplicating the sound, of the fuzz overpowering the simple, effective formulas of their music. But listening to early Weirdo Shrine cut “You Disappear”, the worry should by now be quelled. Simon’s wriggling bass and Li Pino’s splashy, polyrhythmic drumming form a limber core for the track. “No one can tell the direction you go,” Cleveland sighs, Sandahl’s organ a shimmery lacquer at the base, the guitar gaining a touch of fuzz on the solo to accentuate the pain in the lyrics. 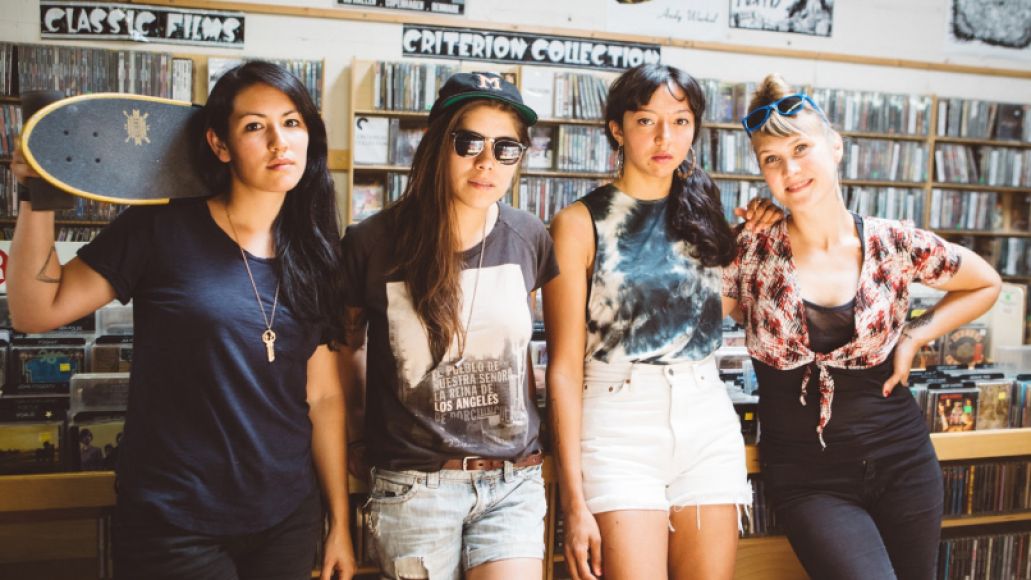 La Luz balances out the sunny side of surf with plenty of shadow, notably in Cleveland’s frequently dark lyrics. “Now I kinda wanna die/ And that’s the truest way to know that I’m alive,” she sings on It’s Alive standout “Sure As Spring” as her bandmates lay out a beautiful three-part harmony. The press release announcing Weirdo Shrine foregrounded some of the real world darkness around the band, specifically a near-death experience in a highway collision. “It’s not so obvious, but it’s definitely in there,” Cleveland explains, before revealing the far darker inspiration to their debut.

“The first record, I was writing the lyrics for right after this mass shooting where some of my friends were murdered,” she says. “I was kind of in a similar headspace of just, like, ‘Everything’s fucked.’ Just really thinking about life and death.” Even at this mention of extreme pain, the four share a positive energy, the same interconnected warmth that makes itself plain in their eye contact and shared smiles when they perform. “I hope the next album breaks the curse; no more horrible things have to happen,” Li Pino counters, and all four chuckle in response. 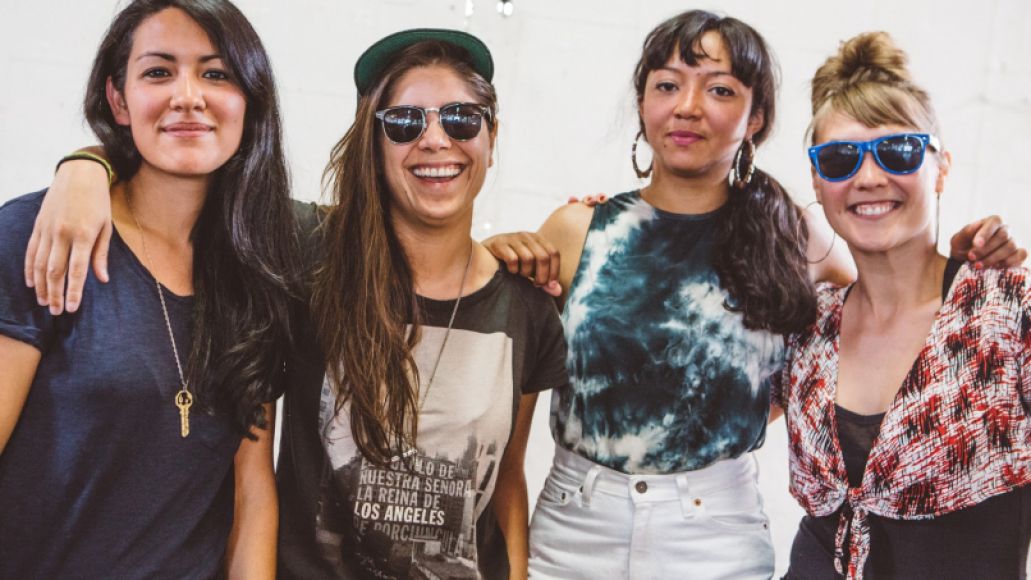 An important source of that warmth would seem to be their hometown of Seattle and the community of musicians and friends they’ve found there. “The city is really beautiful, as a city itself,” Li Pino begins. “Really blue and green.” When I ask about the music scene in the city, the consensus is that there’s a lot going on — too much to summarize. “I’ve always guessed that there’s more bands per capita in Seattle than in any other city,” Cleveland says. But that volume doesn’t overwhelm, as they also insist it’s an incredibly friendly, positive environment. In addition to all those bands, “it’s a supportive scene,” Simon adds. “There’s a lot of record labels, and everyone we work with, Hardly Art, Sub Pop, it’s cool to just stop by.”

The scene inspired their love of performing as well. “It’s the only reason I keep going,” Li Pino says, smiling. “It doesn’t feel like it gets dulled, you know,” Sandahl agrees. “We play show after show on tour, and it’s still fun.” Whether it’s one of Cleveland’s knife-flash guitar solos, Simon climbing onto her bass amp, or synced dance moves, the performances elicit just as much enthusiasm from the growing crowds as on the stage.

When I ask how the traditionally American-associated sound of surf translated to their shows opening for Ty Segall across Europe, the consensus is that though the crowds appeared timid during the performance, they dug the sound too — “very polite and very enthusiastic.” The lack of crowd-surfing, though, threw La Luz off. “People were crowd-surfing at the Ty show in Amsterdam,” Sandahl suggests, before the others counter. “But we started it,” Li Pino interjects. “If Americans hadn’t started crowd-surfing, I don’t think the Netherlanders would.”

“They were moshing in the most delightful way,” Simon chimes in. Considering La Luz’s blend of sunny surf and dark edges, of beauty and pain, delightful moshing might just be the right kind.