Fairly or unfairly, many headlines concerning Morrissey nowadays facetiously concern his penchant for canceling tour dates, his outspoken opinions (whether on Robin Williams or Obama or his record label or something else entirely) or, more seriously, the cancer treatments he received last year.

For a couple hours, all this noise faded into the background at Madison Square Garden. Morrissey brought New York natives Blondie along for the ride in the opening spot. (“I would like to give a very special thank you to Blondie,” he would later quip. “The pleasure, the privilege, is all mine.”)

On their end, Blondie delivered a perfect opening set – heavy on well-known singles and running the gamut of the band’s diverse sounds, from 1978’s Parallel Lines all the way to 2014’s Ghosts of Download. While MSG was surprisingly only about half-full when Blondie kicked off with “One Way or Another”, Debbie Harry got the crowd buzzing as she coyly introduced the next track a couple songs later. 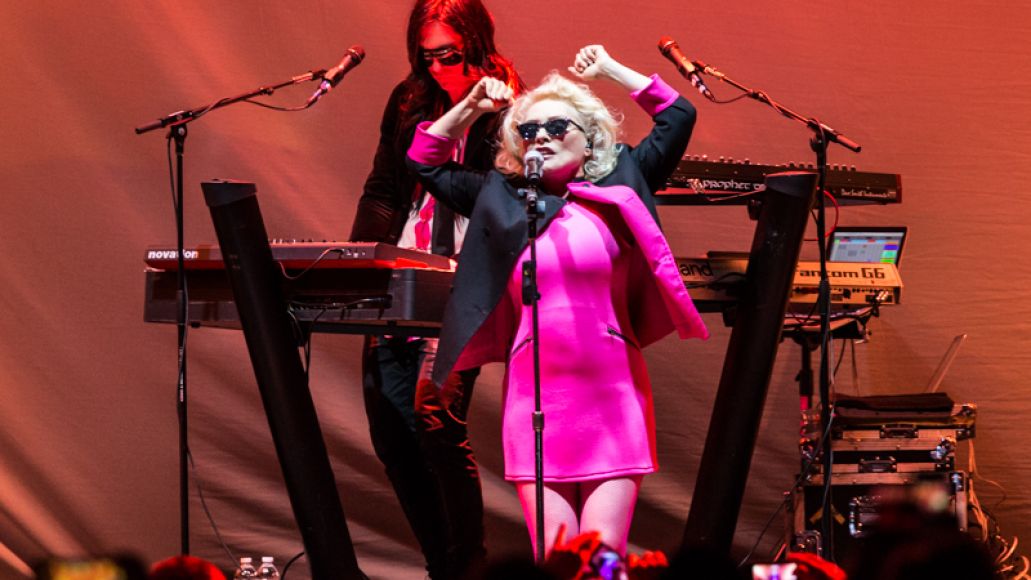 “I just wanna say, if any of you have trouble finding the Pride Parade tomorrow all you have to do is… ‘Call Me’!” Harry exclaimed before launching into the song. “A Rose by Any Name” later followed, and, although originally written by keyboardist Matt Katz-Bohen about how he would love his child regardless of whether he had a son or daughter, the lyrics “If you’re a boy or if you’re a girl/ I’ll love you just the same” took on special meaning in light of the Supreme Court ruling that same-sex marriage is a right nationwide.

Aside from Harry, drummer Clem Burke seemed to be having the most fun – he effortlessly tossed his drumsticks high in the air without missing a beat and regularly played complex drum fills to close out songs with a huge smile. The final tracks – the funky, hip-hop inspired “Rapture”, a surprising cover of Beastie Boys’ “(You Gotta) Fight for Your Right (To Party!)” and biggest hit “Heart of Glass” – all continued to build momentum to the triumphant finish. Blondie closed with the buoyant “Tide Is High” and brought out The What Cheer? Brigade (heavy on brass instruments) for additional support. Harry draped herself in a rainbow flag, earning more wild cheers from the crowd. “Gimme some! Gimme some!” she implored the crowd, as the fans loudly sang back “oh no!” in response to Harry’s line, “I’m not the kind of girl who gives up just like that.”

If Blondie showed how to craft a set around popular songs, Morrissey showed how to hold the crowd’s attention while playing many deep cuts and newer material. Despite his reputation as being fickle and standoffish, Moz was warm and congenial at MSG. An early moment in the set when hecklers loudly yelled at Morrissey to “take off his shirt” while he was in the middle of talking seemed like it would incur a sharp rebuke, but Moz patiently paused, laughed it off and told them, “I will.” 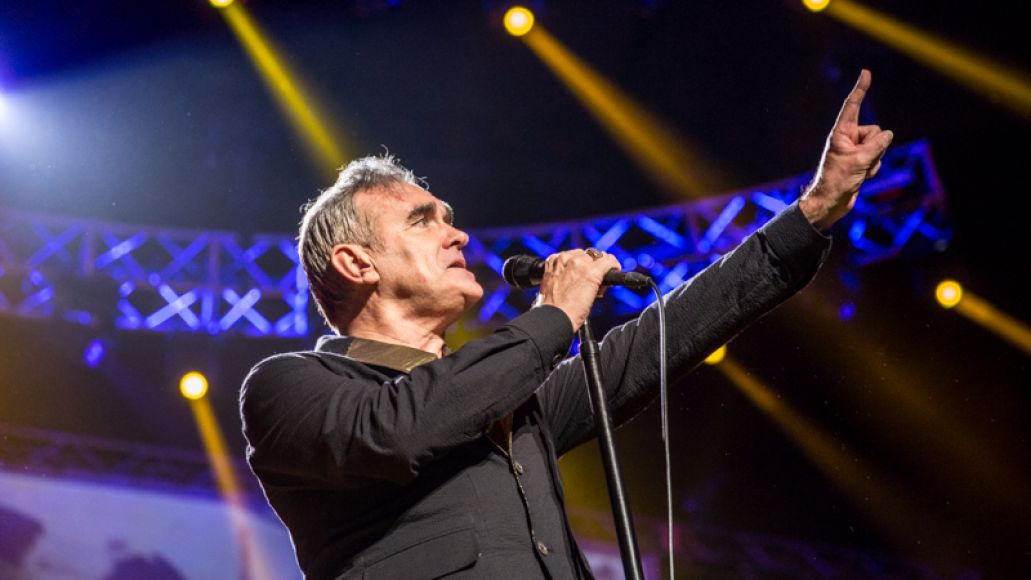 After most songs, Morrissey either bowed or said his thanks to the audience, and he repeatedly leaned off stage to shake hands with people in the front rows. Over 30 years since The Smiths’ debut, Morrissey’s voice still strongly resonates – at times mournful, at times sonorous, at times fragile. His repeated croon of “I’m so sorry” on “Suedehead” pierced through cavernous confines of the venue. “Speedway” mixed things up as Moz traded places with keyboardist Gustavo Manzur, who sang the end of the track in Spanish. “Everyday Is Like Sunday” produced one of the biggest ovations of the evening and the heavier “I Will See You in Far Off Places” – vaguely reminiscent of Led Zeppelin – got the crowd moving. As Morrissey’s music inhabits a space not quite conducive to dancing or moshing, the audience largely stood still and transfixed during the songs, but erupted in loud cheers after each track.

Unsurprisingly, Morrissey also used the stage as a pulpit to preach some of his well-known political stances (including an emphatic endorsement for either Jon Stewart or Bill Maher for president). Most songs featured static imagery as a background, but “Ganglord” paired with gut-wrenching clips of police brutality, from the shooting of Walter Scott to the pepper-spraying of UC Davis students. Similarly, “The Bullfighter Dies” led into The Smiths’ “Meat Is Murder”, which also depicted the horrifying conditions in slaughterhouses worldwide as cows’ throats were slit and chickens were decapitated. At the end of the song, Morrissey sat facing away from the crowd, wistfully gazing up at the footage. As promised, most meat kiosks at MSG were closed for the night, and the ones that were open only served vegan items.

After closing with The Smiths’ “What She Said”, Morrissey returned onstage for just one encore song, the fitting “Now My Heart Is Full”. Moz euphorically pounded his chest – and yes, he did keep his promise, removing his shirt before quickly scurrying offstage. While I’m sure I wouldn’t be alone in thinking it would’ve been nice to hear some more well-known cuts from The Smiths (referencing “There Is a Light That Never Goes Out” while thanking Blondie was a tantalizing tease), Morrissey performed a set in the same way he speaks and in the same way he makes music: always on his own terms.

Blondie Setlist:
One Way or Another
Rave
Hanging on the Telephone
Call Me
Maria
A Rose by Any Name
Rapture
(You Gotta) Fight for Your Right (To Party!) (Beastie Boys cover)
Heart of Glass
Tide Is High (with The What Cheer? Brigade)

Morrissey Setlist:
The Queen Is Dead (The Smiths cover)
Suedehead
Staircase at the University
Ganglord
World Peace Is None of Your Business
Speedway (with Gustavo Manzur on vocals)
Kiss Me a Lot
Alma Matters
I’m Throwing My Arms Around Paris
Everyday Is Like Sunday
Istanbul
Will Never Marry
I Will See You in Far Off Places
Mama Lay Softly on the Riverbed
Kick the Bride Down the Aisle
Neal Cassady Drops Dead
The World Is Full of Crashing Bores
The Bullfighter Dies
Meat Is Murder (The Smiths cover)
What She Said (The Smiths cover)
Encore:
Now My Heart Is Full 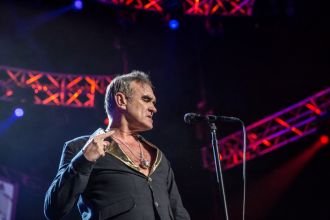 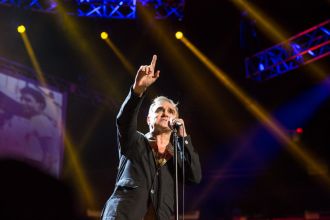 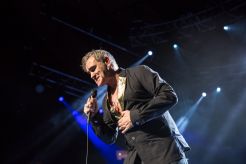 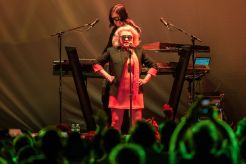 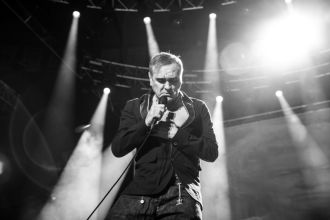 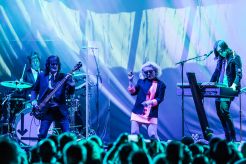 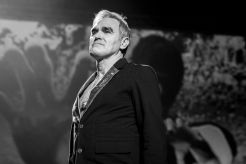