Taylor Swift’s open letter to Apple Music was successful in changing the company’s royalties policy, but also resulted in some unexpected, unrelated drama for the pop sing. Yesterday, photographer Jason Sheldon posted his own open letter to Swift alongside a copy of the pop star’s concert photo authorization form. He argued that Swift was a hypocrite for wanting musicians to be paid for their work while she herself was guilty of distributing a contract that stripped photographers of the same rights.

Though some of that is fair, it also misses a few points. For one, Sheldon’s contract was from an earlier tour, not the 1989 tour. For another, Sheldon says he never insinuated the agreement strips photographers of copyright; instead, the contact circumnavigates copyright all together by allowing Swift and her companies to use the images in promotions without ever paying for them. In other words, the photographers “own” the images, but can’t do anything with them, and Swift can use them in any “non-commercial” way she sees fit.

If you thought these policies might have been clarified or improved in the 1989 World Tour version of the forms, prepare to be disappointed. Another photographer, Joel Goodman, posted a copy of the new authorization forms, and not only do they still contain the “rights grab” from Sheldon’s version, but they add a disturbing new clause.

“This contract is particularly egregious in that it not only contains an all out rights grab on the photographers’ work,” Goodman said, “whilst limiting their editorial control and ability to earn from that work — and does so without compensation — but because it does so under threat of criminal damage or destruction of property.”

Goodman claimed he received copies of the contract from two separate photographers, independent of one another. Clause 5 in the form explicitly states that if a photographer fails to comply with any part of the contract, which includes publishing an image more than once or trying to sell one, “[Firefly Entertainment, Inc., the Artist or the Related Entities may confiscate and/or destroy the technology or devices that contain the master files of the Photographs…” While it’s hard to image a court upholding that kind of contractual language, the threat is still in there. The “rights grab” is one thing, but this may be outright illegal.

It’s worth pointing out that Swift may be entirely ignorant of the terms of these types of photo agreements. In a tweet, Sheldon linked to a post about Michael Franti & Spearhead, who recently had a photo release for a show that granted 100% of the rights to Global, Inc. and the band. Franti himself responded by saying he was unaware of the terms of the release, and in fact prefers to let photographers use the images they take in any way they like. He then said to disregard the release.

Swift has yet to respond to criticism of the 1989 photo agreement, which you can see below. 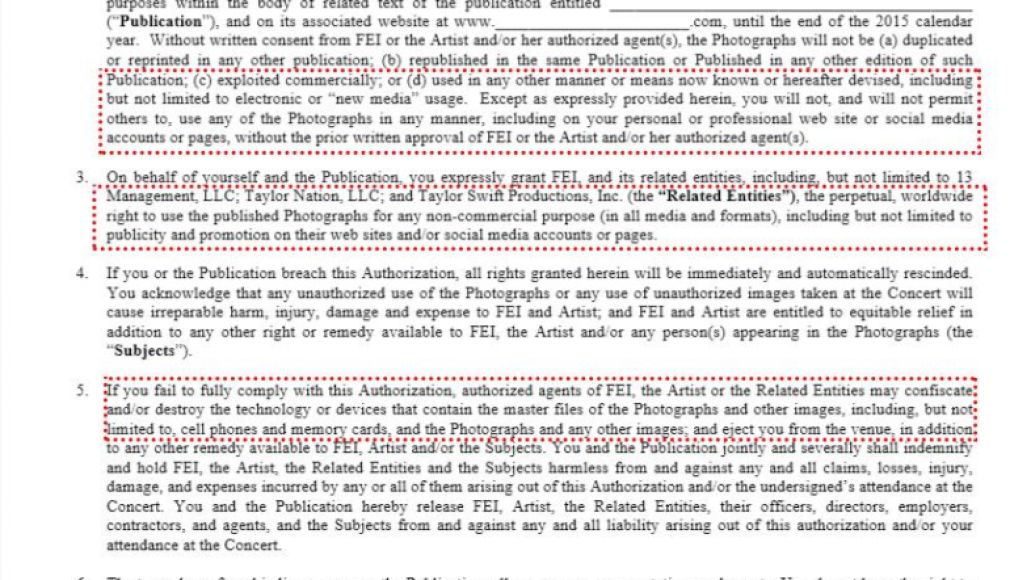