When The Darkness first released Permission to Land in 2003, it shot to the top of the UK charts behind the single “I Believe in a Thing Called Love”. Dueling guitars and lead singer Justin Hawkins’ soaring falsetto cut through the mainstream blah of modern rock radio. Subsequent albums didn’t quite live up to the success of their debut, and inner band turmoil, along with lead Hawkins’ stint in rehab, seemed to stymie the band’s rise.

Now, 12 years later, the band is releasing their fourth full-length, Last of Our Kind, and are once again channeling their Thin Lizzy-inspired power rock into their fans’ hearts. We recently gave Hawkins a call to talk about the new album, new tour, and what it’s like being a new dad in one of the hardest rockin’ bands in the world. 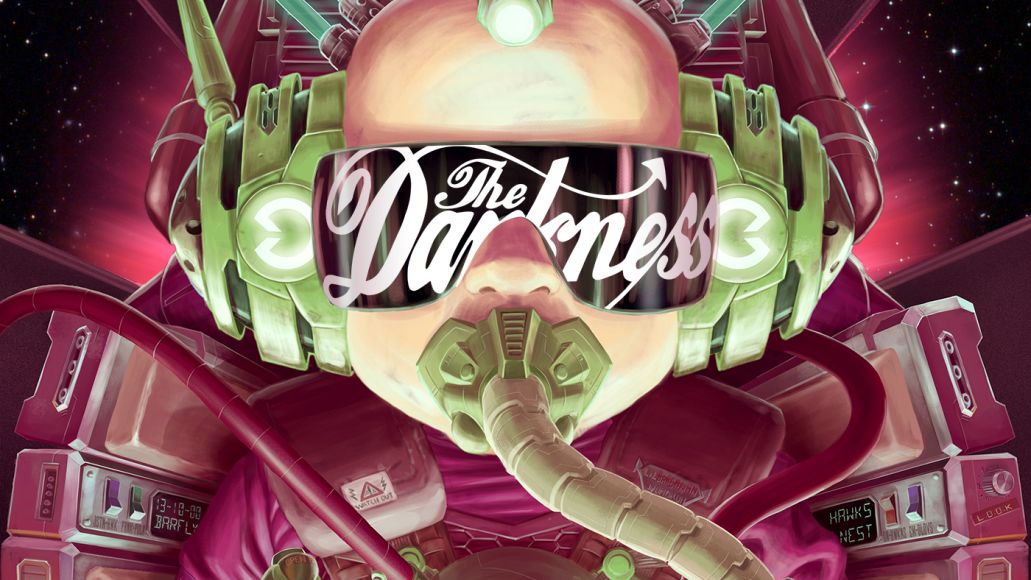 How’s everything going with the new album so far?

Going well. Getting through it. Had a really cool week last week. I know it’s a bit early, but we had a launch party for the new album in London, played a few songs and promos, and did some radio shows. Everything went really well. One of those weeks when everything is right down to the wire. It’s good.

That’s great. I know you guys have a few tour dates scheduled in Europe. Do you have a more extensive tour planned later on in the year?

I think we’re going to break a little after this short tour. We have a few festival things we have to do, and we find it quite difficult to plot a tour during that time. There’s no point in trying then, really, so we’re going to wait until August or September or so, and then just go out then. We’re trying to go to Australia, hopefully some Japan action, then on to LA and work across the US from there. There’s nothing concrete. It’s being plotted.

I read that you recorded this album at your brother’s studio. Was that in Ireland, or was it just written in Ireland?

We wrote in Ireland. We did a very primitive recording in Ireland, but I don’t think anything recorded in Ireland actually survived. It was nice. We recorded and lived in a studio. [The Darkness’ guitarist and Justin’s brother] Dan’s bedroom was actually the control room.

Did recording in that environment have any effect on how things sounded or how things were written?

I suppose. We are all really comfortable around each other’s bedrooms. You can read into that whatever you’d like [laughs]. Not to that degree. We spent as little time as possible in the actual recording zone. We all worked out additional writing bits and parts elsewhere in the house. It’s nice to just sort of relax thanks to Dan. He was a host, and a producer, and a guitarist, and a brother, and a friend. He had a lot of roles he had to fill, and I think it might have been a little uncomfortable for him, but the rest of us just did not give a fuck. It wouldn’t matter to us if he was just sleeping there. But you have get the job done. It was all hands on deck at that point, and you have to make sacrifices — or, sorry, my brother had to make sacrifices.

You recorded the album with drummer Emily Dolan Davies, but she has recently parted ways. You picked up a new drummer, who just so happens to be Rufus Taylor, the son of [Roger Taylor] the drummer from Queen. How did you guys pick him up?

We’ve had drummer issues several times throughout the years. I think we’re on our fourth drummer now. So there’s always these messages that say things like, “If you ever need a drummer, check out this guy,” or “Check out me,” so we don’t have to really advertise or have a traditional audition. There are plenty of people around here that are interested or that we know of already.

We actually got a message, about a year ago I suppose, that Rufus was available. It was too late because it was just after we had taken on Emily, so Rufus has been on our radar for a while actually. But Emily and the band parted company because we needed someone quite urgently to get in and help out with the launch party. We gave Rufus a call. Luckily, he was in Australia at the time, exactly half way across the world [laughs]. He arrived early on the morning of the show that we needed him for, and we rehearsed, and he was awesome.

I think we need to work out how it’s going to be in the long term, but we definitely enjoyed playing with him. I thought he was really great. And that’s completely before you look at the amazing rock pedigree that he comes from! It’s great in its own right. I really hope we can make him a permanent fixture.

Not only is he super talented, but he also happens to come from a very good rock pedigree that fits your sound.

Yeah! In a completely different kind of genre he’s amazing as well. In his other band, he doesn’t sound like Roger Taylor. He sounds more like Taylor Hawkins, who happens to be his musical godfather, and also a distant cousin of the Hawkins. I think they’re removed by maybe two or three marriages. It’s kind of keeping it in the family in a way.

Speaking of families, you have a family now. Does having a child affect your music at all? Or is it just business as usual?

At first thought it was subconsciously affecting me, and in an indirect way, it really is. I feel like everything I do now I have to do really, really great. I can’t afford to do one thing wrong. I used to do things just to have money or to keep the ball rolling, but it’s really important to have a legacy that you’re proud of. Now I know that everything has to be very special. You have to be proud of what you’re doing and have your children be proud of what you’re doing. When you have finally croaked your last death rattle, you want your child to stare longingly at your headstone: “I’m so proud.”

The Darkness' Justin Hawkins: Everything Must Be Special