Doppler Labs may be on the verge of eliminating the concept of bad sound mixing at a concert. No, they haven’t invented a robot sound guy who never falls asleep on the job. Instead, they’re putting the power of live EQ control in the audience’s hands — and ears.

The company’s new Here Active Listening System is a set of earbuds wirelessly connected to a smartphone app that allows wearers to actually alter the sounds they’re hearing in nigh-real time. It’s not just making the audio softer or louder, either (though there is that); the appco allows you to control how much bass comes through, where the midrange cuts off, and how high the treble gets. Crazier still, you can add or remove effects like reverb, echo, flange, and even one that makes it sound like an old vinyl record. Essentially, you’re curating your own listening experience. 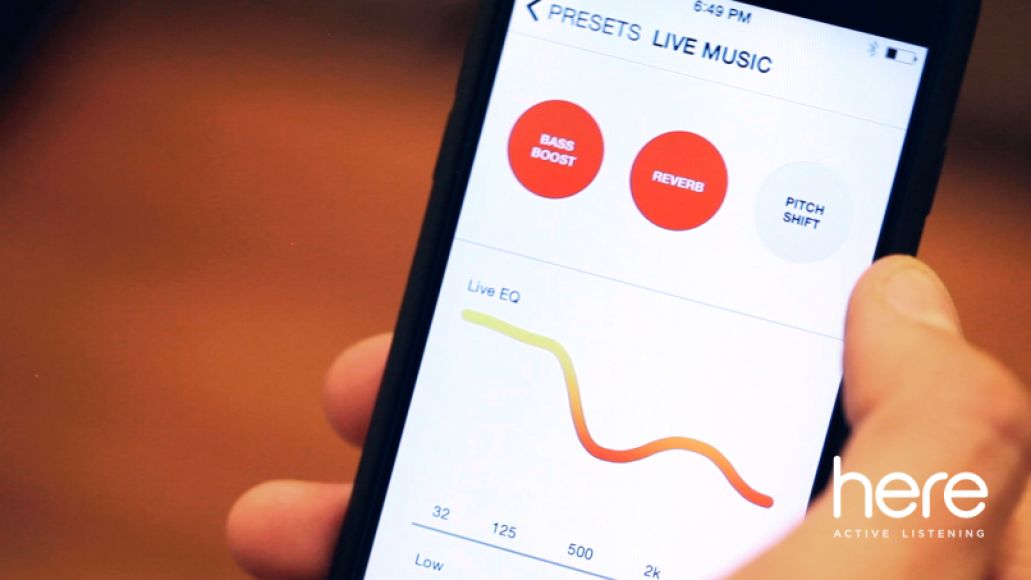 The app comes loaded with preset filters, too, so you can instantly turn a small bar venue into a music hall, or switch it so that the huge festival field sounds to you like an intimate concert experience. While the music applications for these devices are instantly appealing, Doppler has bigger goals in mind. They want people to personalize their listening environments at all times.

“With the Here Active Listening System we want to give you the tools to have the perfect listening experience,” said Doppler Labs CEO and Co-Founder Noah Kraft said in a press release. “We all perceive sound differently, but everyone has been to a concert where the audio wasn’t quite right or has been subjected to a long flight with a screaming baby. Here changes all that, giving control back to the listener by allowing you to curate what you hear and how you hear it. Our goal is to make it so you never have to deal with noise or a bad mix ever again.”

To that end, they’ve created modes that mute the engines of an airplane, the cries of a baby, the background noise of a subway, the clacking of an officemate’s keyboard, and pretty much any aural stimulation you can imagine. You could even give yourself Superman-like super hearing, or turn off your significant other’s nagging.

Besides the theoretical argument around what controlling our audio input might do on an evolutionary level, there are some things to be cautious about with this new tech. Most apparently, the things aren’t exactly attractive; the Here buds feature a large, white circle that make it look like you’re wearing speakers in your ears. Then there’s the risk of accidentally blocking out something you need to hear, or turning a live performance into an ugly mess and not realizing it actually sounds better without Here.

But there’s plenty of stuff to awe at, as well. For one, Here reportedly processes audio at 30 microseconds, making any lag virtually inconceivable. While the buds are saddled with a four- to six-hour battery life, the case actually acts as a charging station and can hold two full charges right in your pocket. It’s like an external battery pack for your Bat-ears. 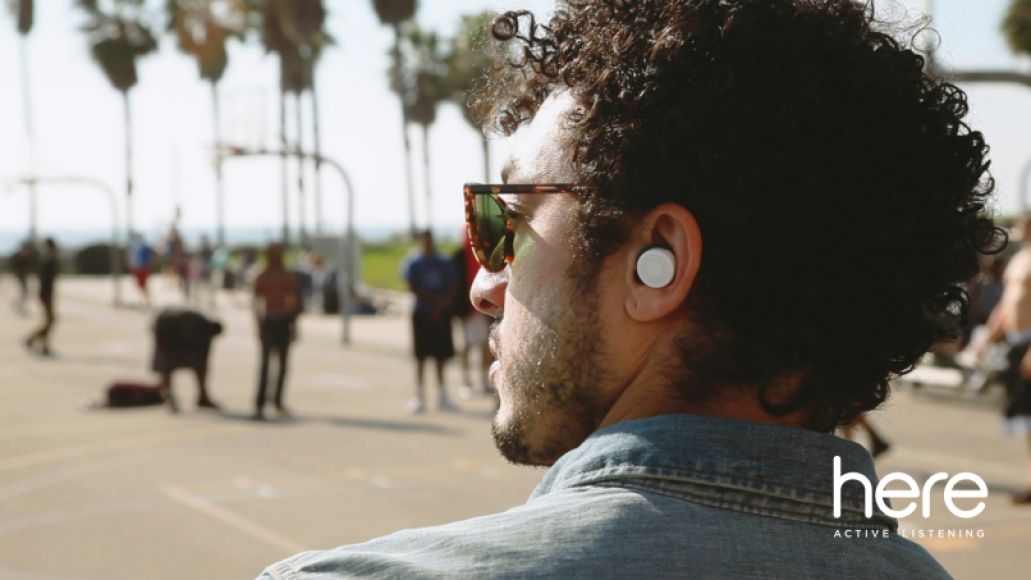 Still, with any new technology, there’s reason to be skeptical about the first generation release. (Here’s looking at you, Apple Watch.) Here is incredibly fresh; Doppler just took their prototypes out for their first real-world test at this past Coachella. But the company is getting a lot of love, having already made deals to have their Dubs “acoustic filter” earplugs become the official earplugs of Coachella, Bonnaroo, and Outside Lands. They’ve also made partnerships with artists like Quincy Jones, Tiesto, and Hans Zimmer.

Before Here even hits the market, however, it’s going to go through some changes. Doppler has just launched a Kickstarter, and some of the pledge “rewards” include being part of beta testing and prototype trials. If you just want the final product, you’re able to pre-order a set for $179, about $70 less than the predicted list price of $249. Units won’t begin shipping till December, but already the Kickstarter has raised $191,447 of its $250,000 goal from just 847 backers. There’s no denying that this technology is intriguing, and looking ahead, there are some frighteningly cool (and just plain frightening) possibilities. (Doppler really wants to take things into Star Trek communicator territory — read more here.)

Below, check the Kickstarter pitch video, which provides a more detailed explanation about the Here devices and Doppler in general. There’s also a clip of Zimmer, an investor and advisor on Here, explaining how he sees the new tech, plus video of two world-class violinists experiencing what Here has to offer. Head to the Kickstarter page for more.