Babe Simpson just wants you to be yourself. You and everyone else. “I think as far as my music goes, the message I’m trying to convey is to just be honest to whatever it is you’re doing,” she says, the fountain outside the Hirshhorn Museum and Sculpture Garden in Washington, D.C. dulling to a quiet roar behind her. “Different songs have different messages, but overall it’s just be true to yourself.”

She leads by example. Simpson has a bubbly, highly infectious personality. She beams when she talks about a sample of K-pop singer Hyuna’s hit “Bubble Pop!”, one she sat on for two years before using it for one of her best songs, “Pickle Juice”. She’s a fan of all types of art. We’re outside Hirshhorn because Roy Lichtenstein is her favorite painter, and his Brushstroke sculpture sits outside. Simpson is also an artist, a rapper in the early stages of figuring out her genius, winding whimsical yarns that whittle her perspective into concise verbal projectiles that strike unexpectedly. In her own way, she’s also a pop artist, and there seems to be no ceiling to what she can achieve.

Simpson is in the collective Barf Troop. It’s another malleable rap alliance of the modern age; as Simpson herself describes it, they originally aimed to be to Odd Future as the Powerpuff Girls were to the Rowdyruff Boys. The Barf Troop Bandcamp page describes them as “a group of filthy babes doing the damn thing.” The collective’s five members — Babeo Baggins, Babe Field, Babenstein, Babelien, and Simpson — linked on Tumblr. “It was first started as a joke kind of thing,” Simpson says. “Everyone was on Skype, and we kind of had this cypher going, and then Babeo eventually was just like, ‘OK, we should be a group,’ not even knowing if anyone could actually make this music.”

As it turns out, they could. The group has been refining its sound over the last few years. They’ve become a formidable force, reclaiming “babe” from the bros who wield it as a come-on and carving out chunks of terrain in rap’s male-dominated landscape. Simpson, who was Justin Baber before Bieber’s racist joke fiasco caused her to decamp from the Beliebers, didn’t have any experience rapping before her friends decided to start a group.

Things with Barf Troop happened quickly, as is often the case online. “Babeo put out this one song, ‘Summertime Fried’, and we were just trying to figure out who else could actually kinda rap. I was just like, ‘Oh, OK, well, me too,’ and things started to roll forward after that,” she says. That was three years ago. Since then, she’s grown into her own. As an artist who’d previously dabbled in other types of songwriting, she’s been able to tailor her writing to fit the form.

In June, Simpson premiered “Martians”, a vibrant song produced by former Odd Future member and current The Internet member Matt Martians. Just over a minute long, it’s little more than an appetizer, but it’s a compact display of skill from a promising MC. It’s also the first release from Simpson’s debut solo project, due out later this year. Simpson, who only has a handful of tracks on the web, is tight-lipped on when exactly the project is coming, whom she’s collaborating with, and even the name. “I always just drop things out of the blue. I don’t like when things are announced. I’ve found that since the Beyonce surprise album I’ve been way more excited about stuff when I’m not told that it’s happening,” she says. The one thing she opens up about is how it’ll sound: “Breakbeat, New Jack Swing, ‘Rhythm Nation’-inspired.” It’s Tumblr rap set in the ‘80s.

Despite the small sample size, Simpson has delivered big, proving she’s both a capable rapper and songwriter. One of her earliest appearances, the Iman Omari-produced “The World Is Yours” from Barf Troop’s Summerslime mixtape, showcases her dexterity and levity in lyrics like, “Gee golly, golly gosh, I’m gully in galoshes/ Drinking goulash/ Gullah Gullah, Binyah Binyah/ Been ya favorite lyricist.” More recent releases, like her short guest spot on Babeo Baggins’ “Hero”, have shown a greater mastery of her unique, freewheeling flow.

As good as Simpson is, everything seems to circle back to the Troop. Despite living in separate cities, they’re a tight bunch. Simpson, who drove up from her home of Richmond to D.C. to chat, proclaims early on that Troop member and local Babeo Baggins will be joining us, just to chill. She does, and the energy is genuinely positive. It’s a testament to how the internet can foster real-life relationships and how that chemistry can produce great music. It’s proof to older finger-waggers that millennials aren’t getting sucked into a vacuum of clicks and likes.

This year is shaping up to be the Year of the Troop. In addition to upcoming music from Simpson, Babeo Baggins recently released her stellar debut mixtape, Posi+ive, which features Simpson. Earlier this month, Baggins was announced as a performer at this year’s Trillectro Music Festival alongside Chance the Rapper, RL Grime, Kehlani, D.R.A.M, Dom Kennedy, and more. She says if her name is on the bill, you can count on the whole Troop being there. “I’m on the poster, but it’s never one thing. Never. It’s always a Barf Troop thing,” she says. After Trillectro, the entire collective will hit the studio to record a collective mixtape. They already have a song in the tank. “It’s a Death Grips sample,” says Simpson. “It’s tight.” There will be some one-off shows and, eventually, a tour. 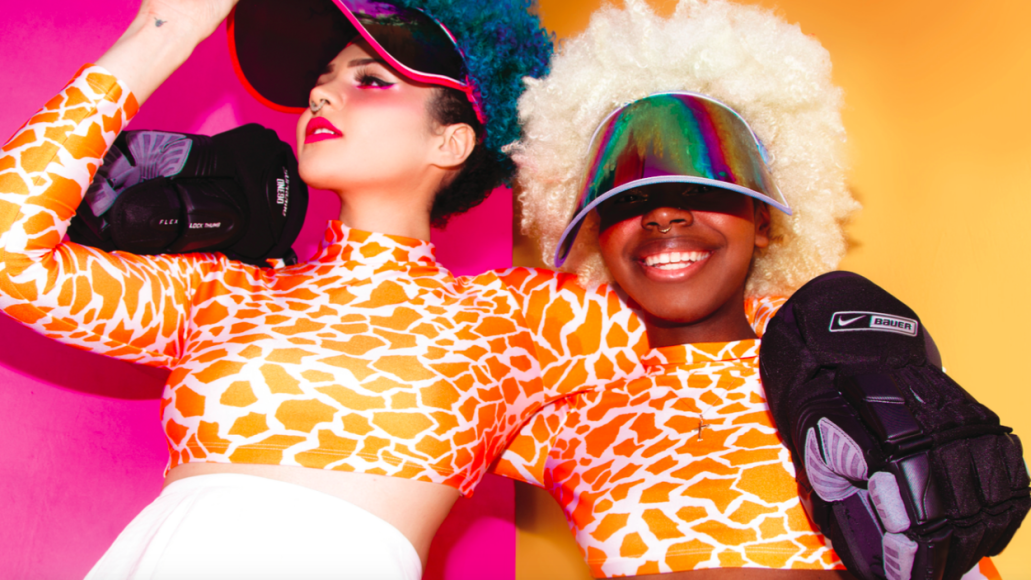 The collective stands as a representation of what rap can be when you take it out of the hands of men. They’ve banded together, creating a megaphone for their distinct individual voices. Barf Troop is shattering tropes and stereotypes surrounding femininity and doing so in a genre that has typically been deemed an enemy of progressive gender and sexuality politics.

Rap culture has often been tough on female rappers and rappers perceived as feminine, but so has the overarching patriarchal culture that rap exists within. Still, criticisms have been levied against such feminine rappers for participating in rap, a genre often seen as more misogynistic, more homophobic, and more transphobic than others.

Asked about being a female rapper and facing such criticisms, Simpson responded incisively. “Anyone who is critical of rap [in that way] hasn’t heard any other kind of music, because it’s definitely a lot more misogynistic than rap, but there, it always comes from a place of internalized misogyny,” she says. “Whenever it’s rap, it’s more” — she impersonates a stuffy white person — “‘I don’t like this because black people are doing it, and now a black lady is doing it so it’s double bad.’ Basically, anybody who says anything like that can shove it. I wouldn’t want anyone like that listening to what I’m doing anyway. I’m not too concerned about their opinion.”

Even though such criticisms of rap are often misplaced, the genre has areas that need major troubleshooting. Recently, Erick Sermon told TMZ that there was no place for transgender people in hip-hop. Simpson’s response undercut his hyper-conservative ideal at the base. “Rappers on that spectrum — LGBTQIA and so on — they’ve always existed,” she says. “They just haven’t been out. Since the beginning of rap, there have always been gay rappers, trans rappers, bi rappers. For him to say that there isn’t a place for it doesn’t make any sense. Just because something isn’t visible to you doesn’t mean that people aren’t out there making it.”

Simpson went on to talk about how heavily gay culture has influenced rap: “It’s so weird how rap has transformed, because every super-popular cis dude rapper who is straight lifts from gay culture endlessly. Remember that [Crystal Waters-sampling] T.I. song, ‘Why You Wanna’, that was just a slowed-down house track? I was like, ‘No … literally this is just like the ballroom scene,’ and nobody notices and it’s just like ‘OK, well, “Why You Wanna” is awesome.’” Gay and trans culture, specifically black gay and trans culture, is often overshadowed despite its influence in rap, but openly gay rappers like Mykki Blanco (whose producer, Gobby, laid the beats for several Barf Troop songs, including “Pickle Juice”) are helping to turn the tide.

2015 has been a landmark year for the LGBTQ community, and that carries over to rap, which now has its largest spectrum of voices ever. In a recent interview with The Isis Nicole Magazine, Babeo Baggins talked about perspective and how she’d like to see more stories from the LGBTQ and non-binary communities in rap and less from cis men with no stories left to tell. 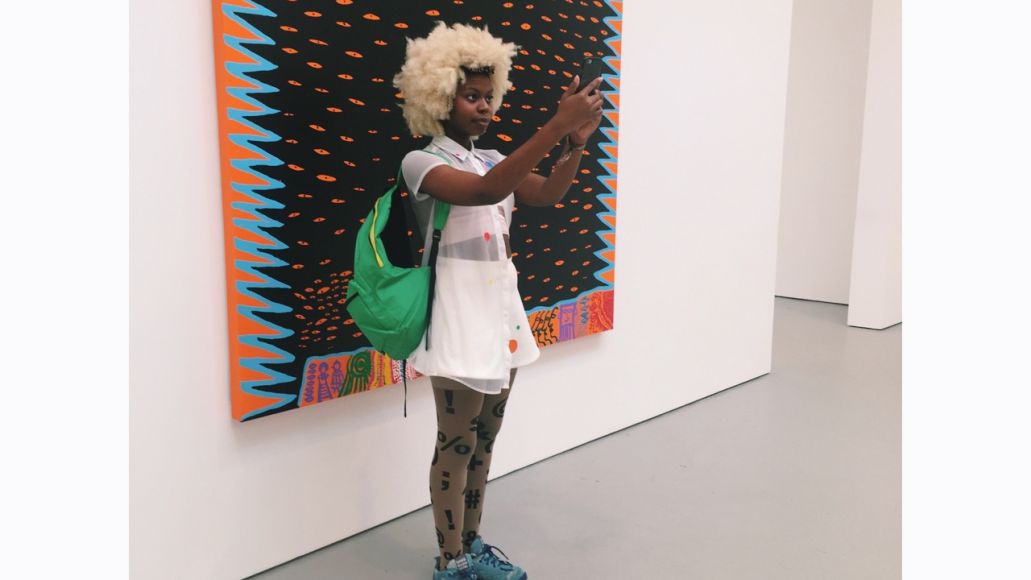 Asked what would even rap’s playing field and allow those voices to be heard, Baggins said, “I think it’s just gonna have to be a mass influx all of a sudden of women and non-binary people and trans rappers and everything at such a sudden moment that it’s undeniable. You’re not going to be able to avoid it, so you have no choice but to accept it because it’s just there. And it’s definitely coming.”

Simpson piggybacks with gusto. “Niggas just need to stop being scared,” she says. “Like, they secretly love Nicki and Tink; they just listen to it in their house. They have to be true to themselves and not be worried about what anyone else thinks, just because they’re listening to a woman or anybody else who happens to be on a different gender spectrum than them making the same kind of music that they typically make. People just really need to open their mind.”

That’s Barf Troop in a nutshell: Be yourself and let others do the same. Soon, plenty of people will know exactly who these artists are, distinct individuals in a unified collective. Maybe some will follow suit and be themselves, too.