For Thomas Arsenault, songwriting begins with suffering. Under the moniker Mas Ysa (pronounced ‘mas-ee-suh’), his moody, yet up-tempo experimental songs uncover the painful sensation behind affliction, the loss of former lovers, and succumbing to rapture. But his recordings aren’t muted or melancholic. While Arsenault’s spirit comes perfectly wrapped in the cellophane of anxiety and rage, his utterly in-the-moment, near-histrionic vocals (which sound like a “crying tantrum” according to the 31-year-old) are hooky, danceable chills that lighten manic moments with beat-smart lyrics and who-gives-a-fuck emotional purging.

Arsenault’s first proper full-length album, Seraph, reaffirms just how good he is at translating that balance. Its thick synth lines sharpen and grumble underneath promenading brawls of drum programming, and lyrically he doesn’t excuse either party – he’s as critical of his own faults as he is condemning of his loved ones’ mistakes.

“My music in general is an ordeal,” he says, calling in from Portland en route to a show supporting Tanlines in San Francisco. “And that’s why touring helps. To be exhausted and half hanging on a thread serves me well in terms of being sort of maniacal on stage. I just wish I was 22 again.” Other than an aging emotional and biological metabolism (“it’s unhealthy for my personal life”), he reiterates that there is still a routine, “…but it’s at a bar.” 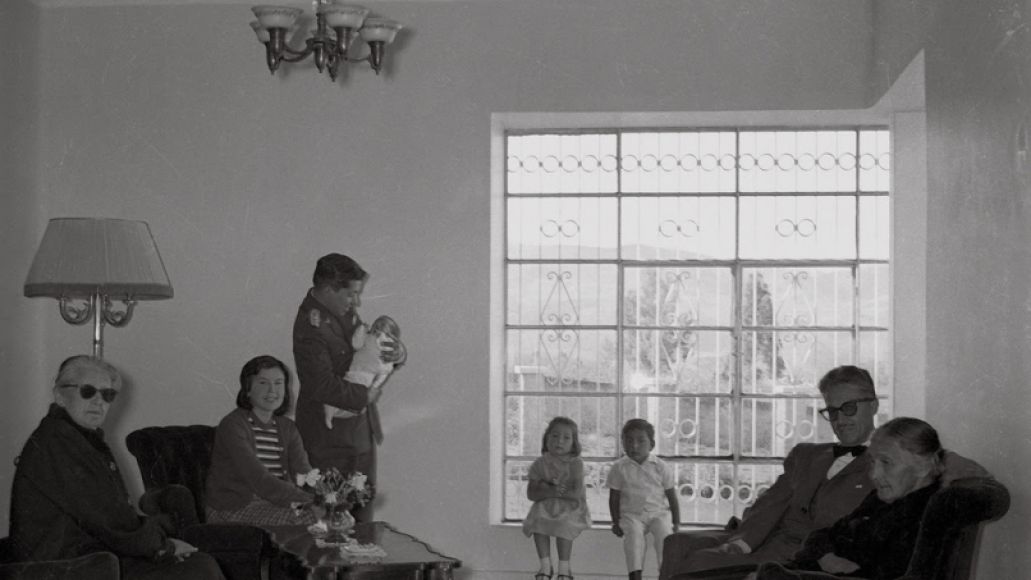 His falling into the electronic experimental soup was an incidental thing. While living in New York, Arsenault took a position as director of post-production for an advertising agency and worked as a video editor at the same time. “There was a conflict. I never wanted to work in advertising; it’s demanding, and I don’t care about Macy’s making 14-year-old girls feel bad about themselves, so they can buy shit.” All he wanted to do was make money for rent and music, and although he never liked sharing his music, looking back at that corporate life and comparing it to the 11 years he spent living in São Paulo (his mother is South American) when he was younger offers a stark contrast.

After moving to Brooklyn to run a studio closely linked to legendary DIY spots 285 Kent and Glasslands, sharing the space with seven other musicians allowed him to inhale every corner of the DIY creative world. “I was part of a really strong community of artists who all make really weird shit, and we’d just collaborate together.” Despite the freedom, he had to have his “arm twisted” in order to perform and put vocals to his tracks, but it all paid off during a show in Williamsburg when he was scouted by Downtown Records (“because of our match in personality”). The signing process was all very business-like: “I wasn’t running around town handing my demo out like, ‘Please talk about me, SPIN magazine!’”

He then went on to open for acts such as Purity Ring, EMA, and Deerhunter, but just as the upbeat temperament of his music is anchored so heavily by melancholy, the bohemian lifestyle couldn’t stay afloat, and everyone living in the studio got evicted.

It was a turning point. From that moment on, the music followed where his life took him, which is upstate in Lake Hill, NY. Like all profoundly emotional and autobiographical music, it’s a matter of timing and solitude, rather than indulgence and sharing. Recording most of the album in a home studio, living away from the city soon became his temporary autonomous zone, a space created that might not last forever, but private enough to slip under the radar. “I use music in a very functional, pedestrian way. It’s soothing and therapeutic to do, and it’s a nice way of sectioning your afternoon and facing things about yourself.”

Arsenault is obviously devoted, because moving away meant moving closer toward himself. “There were some months where I couldn’t touch the songs because I wasn’t emotionally connected to them,” he explains. “Unless I feel like an open sore and slightly embarrassed, then I won’t do it.”

All over his darkly euphoric and intimate album, Arsenault shows a new knack for pulling at listeners’ strings. Think of his musical power as an instrument to be understood – pressed, turned, and twisted repeatedly in all different directions. More than its high-density, shimmering synth electronics, his lyrical intensity is still the primary element connecting him emotionally. Two songs captured then include “Sick” and “Suffer”, the former of which he isn’t willing to play live yet. Of the latter, he reflects: “I’m not proud of the person in that song, but the lyrics come from me, so it’s a version of me, but it’s angry and hateful and jealous and drunk.” Under the cover of cruel lines like, “She won’t wanna drink this much/ Fuck her,” he adds, “It’s not a nice sentiment to say, and I don’t aspire to feel that way. I just wanted to preserve the drama, so I could move on.” 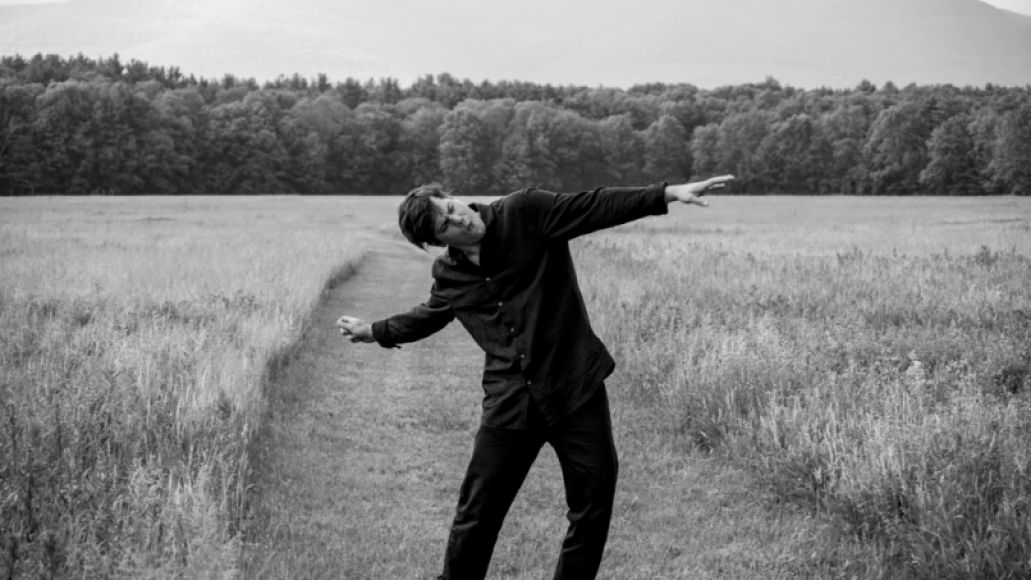 But does Thomas Arsenault and his flair for drama, wearing his Mas Ysa cloak, feel like he’s hiding behind a project sometimes? “I had a girlfriend who said to me once, ‘The truth just sounds different.’ I have an internal bullshit meter, so if I’m on the microphone and think of something that feels really good to say and it just has a footing, it doesn’t have to be true. I’m not a stock broker. I don’t need to deliver you facts. That’s just not who I am. When you want to say something to somebody and you say it, you feel a relief.”

Still, there’s a prickly rebellion in questioning the meaning of his Mas Ysa pseudonym. “It will be impossible to find any good answers. I change my answer all the time! It’s totemic, it’s a vessel, it will mean what it does posthumously.” At that point, he could probably hear his own “bullshit barometer,” so he chooses to take my silence as his cue to reiterate. “It’s magic, it’s assiduous, it’s residual. I’m probably giving you the most thorough and honest answer out of everyone, I swear to god.”

I hear clinking of piano keys and ask what music is playing in the background. “Oh, I’ve found a piano in the middle of the street, and I’ve been sitting at it this whole time.” The new soundtrack to our conversation feels like we’ve wobbled into a Woody Allen movie, and while it’s clear that the relief he gets from music is not only addictive, but conducive to who he is, he spares no time for a stab of self-deprecation. “All of my friends are better musicians than me, and you’ve heard of none of them. They’ll even tell you that they’re better than me too.”

While Seraph revels in gloriously messy human emotion, each tamed and treated by him, there are moments where Arsenault is playing against brand. His suffering is recast during the album’s most upbeat (and longest) track, “Look Up”. In fact, lyrical moments like these (“Making changes/ I’m the one here”) support a beautifully sugary glitter-beat, an electropop spark written to jolt him forward away from his past, ending in a continuous howl-like mantra: “Don’t compete with your friends.”

“What’s bad for your heart is good for your art,” he adds. “I’m 31. I’m stuck being who I am, and I think that’s part of the reason why I’m less ashamed to have really emotional performances or really personal songs. I hit a point of this is who I am, and it’s time to put it out.”

The phantom piano creaks, and an extra “prrrr-ing” sets him off again. “I don’t have much of an identity crisis anymore, but come to think of it, I do need something to write my next record about.”