Wolf Alice is a band for 2015. The North Londoners’ debut album, My Love Is Cool, plays like a mixtape, blending genres as diverse as sun-soaked indie pop and mosh pit-caliber thrashers. Across the 12 tracks that make up the record, you’ll find a stunning array of influences, musical styles, and pure energy.

Lead singer Ellie Rowsell attributes Wolf Alice’s expansive sound in part to the varied tastes each band member brought to the band. “None of us were into just one thing,” she explains. “No one just grew up on punk or only listened to hip-hop. Our appreciation is more for songs themselves, rather than genre. I think that reflects on how we write music.”

In many ways, My Love Is Cool falls in line with this sentiment, coming across more as an assemblage of songs rather than a cohesive single statement. Rowsell is reticent to attribute even the album’s title to a larger idea, stating bluntly, “We didn’t write a concept album.” The lyrics speak to new relationships, the struggle of adulthood, alienation, and something indescribably primal. The sound, a musical potluck, takes some of its roots in the music Rowsell and her cohorts were raised on. She credits P!nk’s M!ssundaztood as an inspiration and cites the bands she listened to during her time in secondary school — like The Strokes, Yeah Yeah Yeahs, Pixies, and Nirvana — as helping to influence the band’s sound.

The Pixies can be heard on tracks like “You’re a Germ”, where a luring melody crashes into a high-octane chorus and back again. The aural zeitgeist present on My Love Is Cool extends well beyond the bands of Rowsell’s youth. Joanna Newsom’s melodic fragility permeates opener “Turn to Dust”. Centerpiece “Silk” recalls Grizzly Bear’s brooding indie rock. The chilled-out sound of “Freazy” could be an Ivy B-side.

But Wolf Alice is not a band built on the signatures of others. Perhaps the better comparison to make isn’t between Wolf Alice and other bands, but between Wolf Alice and themselves. Roswell admits that their studio sound is markedly different from their live show. “We don’t use background artists [on tour], so it’s never going to sound like the record because we don’t have enough players or keyboards.” 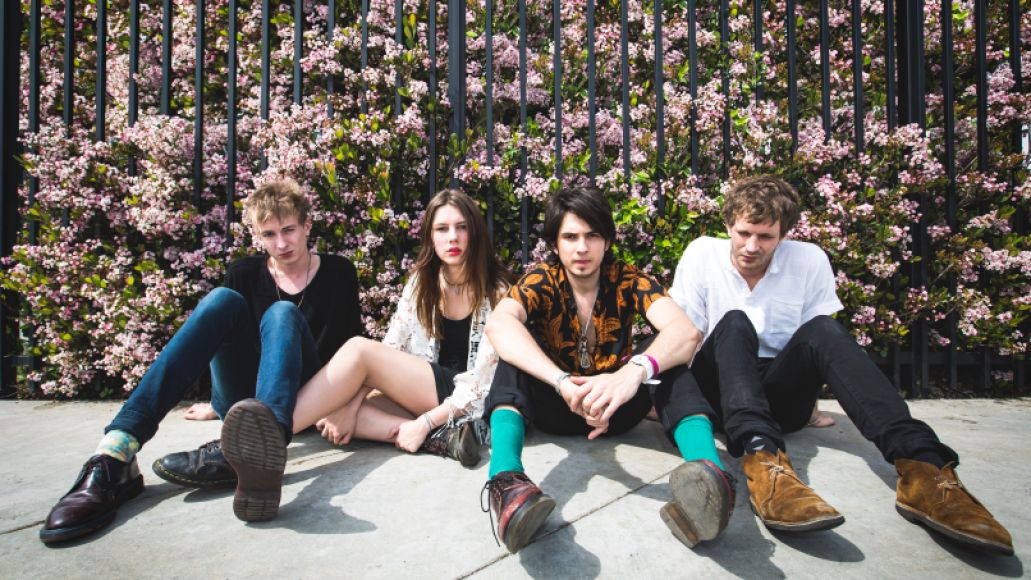 Aside from a lack of keyboards, Wolf Alice also enjoy tweaking the makeup of their songs to present a “fun, energetic, and quite heavy” live alternative to their recorded sound. For crowd favorite “Bros”, a song that first garnered attention when it was released as a standalone single in May 2013, the band plays it live “a lot faster and a lot heavier.” Rowsell concedes that some songs off My Love Is Cool, songs that haven’t been played as extensively as “Bros” or, in some cases, haven’t been played live at all, will take a new sound in their live form. But that’s something she’s perfectly OK with. “If everything sounds exactly like the record, immaculate and perfect, it loses a certain charm.”

While it seems almost cruel to be hungry for new music from a band that just released their debut album on June 22nd, the demand is somewhat more warranted given that some of Wolf Alice’s fans waited over two years for their first full record. Rowsell is understanding, adding: “I think because some of these songs are quite old — some of those songs we’ve been playing for like three years now — we really want to be writing and releasing new music as soon as possible.”

Asked if “as soon as possible” might lead to another long wait, she dismisses the notion. “I don’t think we’ll be taking a break and going away. We’re already working on new stuff, in a sense — just constantly writing. It’s fun to drip-feed new stuff into your set, so we’re particularly eager to do that.”

The band will have ample chances to mix new songs into their setlist as they prepare to embark on a tour that will take them through the rest of the year, with stops in North America, Europe, and Australia. Along the way, they’ll play an array of festivals, a platform Rowsell feels is important because you “have to almost win over the crowd.” But while festivals will give Wolf Alice a chance to play bigger stages than they normally would as a headlining act, she sees her band most at home in a packed club show. “I think you always feel more proud at your own show. You get to feed off your audience because they’re specifically there to see you — that’s their activity of the day. It’s a special occasion.”

Armed with a full set’s worth of tracks, with the chance of a new song’s debut always waiting in the wings, Wolf Alice have emerged from a long gestation period with a song for everyone and a tank seemingly overflowing with raw passion. It is a special occasion.