Music streaming has been a headline-maker for a while now, but particularly so in the last five months. All the buzz around TIDAL and Apple Music has put more attention than ever on the streaming market. One of the companies most vulnerable to the sudden increase in competition stood to be Spotify, but as it turns out, competition is good for business. Since Apple Music launched on June 30th, Spotify has had a better week on the US iTunes download charts than ever before.

According to Bloomberg Business, on the day before Apple Music hit idevices everywhere, Spotify hit #9 on the Apple chart, and it stayed there for five consecutive days. It subsequently dropped to #10, where it currently sits, but that’s still higher than it’s been for even one day since December 2013. To wit, Spotify just had its best week ever on its newest rival’s own download platform. 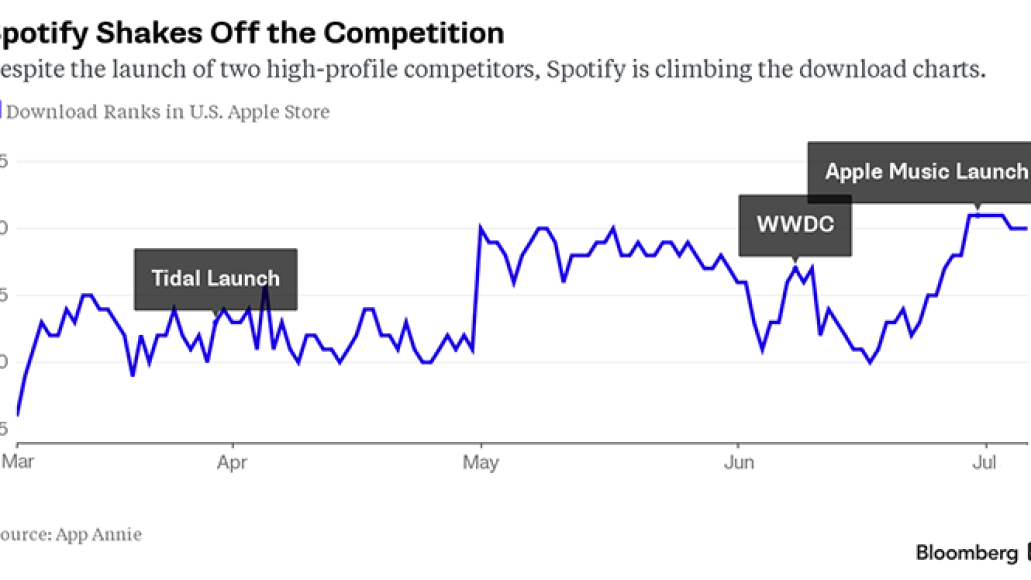 As you can see in the chart above, Spotify also experienced a slight bump when TIDAL went live in March. It seems that any attention given to streaming services provides the current world leader even more new users. And it’s not just in the US, either. Spotify has shot up on both Apple and Google Play app stores across the globe since March. By April, it ranked in iTunes’ top 10 most downloaded apps in over 20 countries. 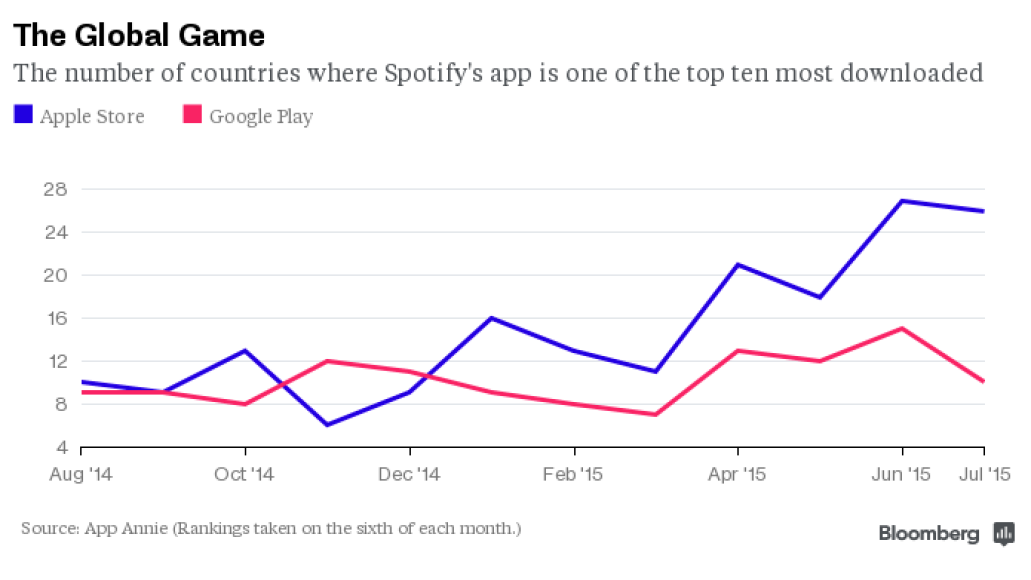 Of course, the interesting problem here is that clearly Spotify users are also Apple users. They want people to download their app, sure, but they don’t want those same people to funnel money into their freshest and hottest competitor. With that in mind, the company is reportedly getting ready to make their users aware of a price increase they may face when going premium. According to The Verge, Spotify is prepping an email informing users that Apple charges a 30% fee on all payments made through iTunes — that is, through the app your just downloaded from iTunes. That means users pay $12.99 a month as opposed to $9.99. Spotify provides a simple solution in the email by linking recipients to the web-based premium signup.

Regardless, the Bloomberg data shows that streaming apps in general seem to be benefitting from the sudden increase in options. Still, this success only really translates to dollars for the companies if users end up going premium. This data is only talking about downloads, and only within a week’s time.

The real test, as Bloomberg notes, will come three months from now, when the early Apple Music adopters will end their free trial period. Then we’ll be able to see how many users stay on for the subscription service compared to how many new Spotify downloaders go the same route. Apple Music’s goal all along has been to attract users who have never paid for streaming before; if it ends up just stealing paying customers from Spotify as the latter continues to gain new subscribers, it may not be the game changer it hopes to be.

Despite Apple Music's launch, Spotify just had its best week ever