One of the earliest rumors regarding James Blake’s forthcoming third album, Radio Silence, was that Kanye West and Bon Iver’s Justin Vernon would be appearing as special guests. More than 12 months later, aside from the random, vague interview or two, the Overgrown crooner hasn’t offered much of a confirmation or denial  … that is, until this week.

As Redditors have pointed out, Blake sets the record straight in, of all places, the latest issue of Esquire magazine. Asked whether there was any truth to the Kanye and Vernon speculations, the UK singer answered simply: “I can confirm that they’re on it. Kanye — I’m with him today. We’d already started on something … today we should nail something down. If it doesn’t end up on the album you know it hasn’t worked.” 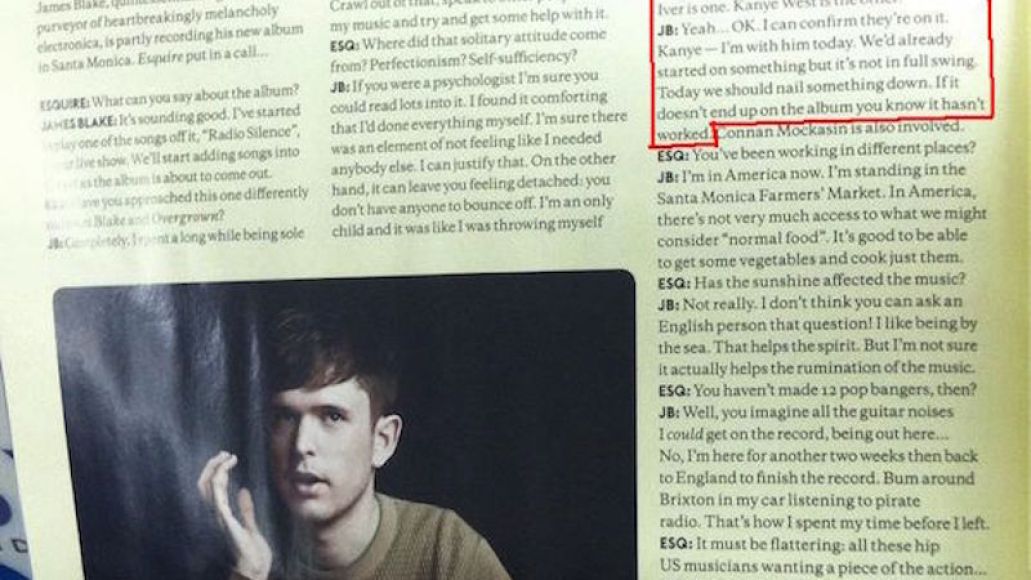 And there you have it, Blake fans. If his “Radio Silence” song earlier today didn’t have you going bonkers with anticipation, then this juicy tidbit surely will.

This isn’t the first time these three A-list acts have linked up; Blake and Vernon previously joined forces on a song called “Fall Creek Boys Choir”; Kanye and Vernon worked side by side on a number of Yeezus tracks, including “I Am a God” and “Hold My Liquor”; and Kanye once called Blake “his favorite artist.”