“He was the lead singer for a band called the Grateful Dead,” my dad said to his father-in-law, either revealing or concealing more of his tie.

I don’t know exactly when Jerry Garcia crossed the gulf from countercultural icon to icon-icon, but it had to have been before the neckties. Even history’s most recognizable hippie has to transcend the territory before getting to dress the suits. Garcia didn’t actually design those neckties, specifically — his visual art was used for a line of them that he simply signed off on — but there’s something symbolic in them, if innocuous. There was a point, probably sometime around the Grateful Dead’s crossover into permanent stadium residents, when “Jerry Garcia of the Grateful Dead” became just Jerry “Cherry” Garcia. I was five when he died, and those latter years are the only ones I’ve known.

In one especially clear-eyed moment during the new Netflix biographical documentary on Bob Weir, The Other One, Weir strains to expound on the complications of being Jerry Garcia — whose following, he seems to want to say outright, was more of a weight than a blessing for him — before slowing himself down and hammering the point square: “He was just so goddamn famous.”

It was at least 10 years ago when my dad had to explain the bright necktie that he chose to wear to some function to my mom’s dad. Ten years before that — July 9th, 1995 — the Grateful Dead performed at Soldier Field with Garcia for the last time, when he said goodbye to his younger brother Weir with “always a hoot” before suffering a fatal heart attack exactly one month later. 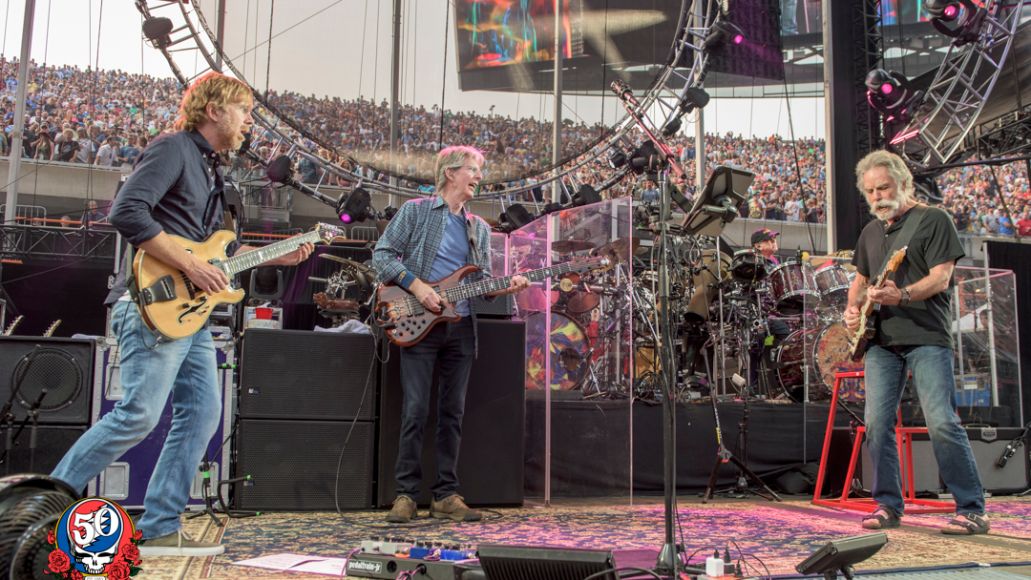 On the steps of the Field Museum, Mitch, 59, was finishing up 4 p.m. beers with his three high school buddies from Philadelphia, where they all still live. Mitch has seen “a couple” Dead shows before, which I soon come to understand is several, and all over the country, including those last week in Santa Clara, California. His concert recollections led to their exchanging memories from high school, junior high even, and how they all met through basketball and stayed friends largely through Dead shows. “I would just start fights,” their pacifist-looking point guard said about his playing style, and the rest corroborated. They are all confirmed Bill Walton fans.

Jason, 41, shirtless, sat by himself in the sun, hugging and dapping strangers and unleashing elated “WOOs” every two to three minutes. In from upstate New York, he claims “38 to 40” Dead shows from his teen years, his last at the Knickerbocker in Albany, New York. With over an hour until the band was to go on, I entered the current of tie-dye flowing through walkways between Lake Michigan and Lake Shore Drive into the stadium, a current that flowed for more than a mile. I told Jason I hoped to see him inside. He spread his wingspan and swiveled his head and reminded me that “we’re all inside,” in earnest.

After a 90-minute ordeal that involved 1) somehow being allowed inside without a ticket, 2) being redirected no less than four times toward where I was to actually pick up my reprinted ticket that never arrived in the mail, and 3) making the risky choice to leave the stadium and retrieve it so that I wouldn’t have to spend the whole show wandering the concourses, I reentered to “Jack Straw”. Only then did I ask and was informed that I had missed exactly one song. Unfortunately, it was the one Grateful Dead song that has moved me more than any other, and the one with the most interesting performance history to me: “Box of Rain”, the Phil Lesh-led opening track of their pinnacle studio achievement American Beauty, which the band kept off setlists for 13 years until a sudden stroke of “screw it” at a 1986 show in Hampton, Virginia. It was also the last song they performed at the ’95 Soldier Field show. 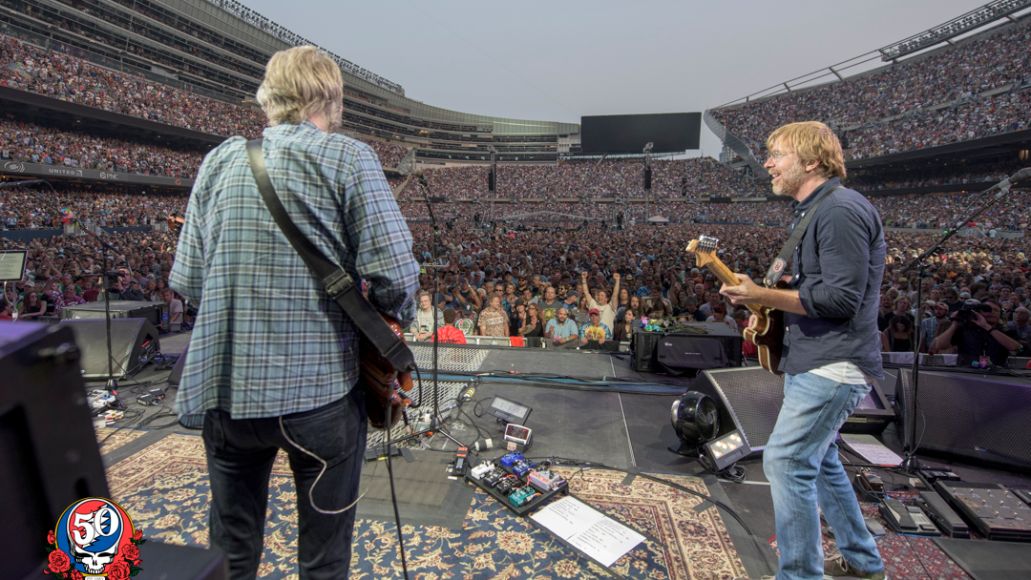 So, sound quality was not ideal. Comes with the territory. I strained to hear Anastasio’s words more often than not (though I had less trouble with Weir’s and Lesh’s, and even Bruce Hornsby’s on “Fire on the Mountain”), but in spite of this (and in spite of a number of miscues that earned lighthearted dirty glances from Weir, and some very obvious nerves), it’s my stance that inviting Anastasio, all things considered, was a good idea. Forget the audience crossover. The man’s guitar soloing, at its best, reaches dead-ringer levels on Garcia’s (if not Garcia’s at his best), and the two occupy the same vocal register. “Scarlet Begonias”, which Anastasio took the lead on, stirred more energy into Soldier Field than any other song on the night, and I can’t imagine there’s another human being alive who could have done it that well.

Weir, Lesh, Kreutzman, Hart, Hornsby, Chimenti, and Anastasio as Garcia. There you have it: your final Dead roster, the last ones on the floor as the clock runs out on 53 years. It’s a definitively 2015 look, not to even mention that Weir is past his days of the signature short shorts, or that Mickey Hart wore a “Fare Thee Well” hoodie that he probably just swiped from merch before taking the stage. For just short of five hours, the seven oscillated: focused to messy, structured songs to self-sustaining conversations, transitions to arrivals. Five decades later, Lesh still possesses the strongest smiles and most expressive shoulder-shrugging moves. Weir still has the same dead-serious, intention-imbued eyes; may God bless and keep Bob Weir’s eyes, always. And for their part, rhythm devils Kreutzman and Hart stayed stoic, and when their moment came, they conducted a 30-minute drum segment that blended theremin, xylophone, loops, bongos, and techniques I’m not even equipped to describe for a jungle-calling production familiar to my ears but completely new and exciting to my eyes. 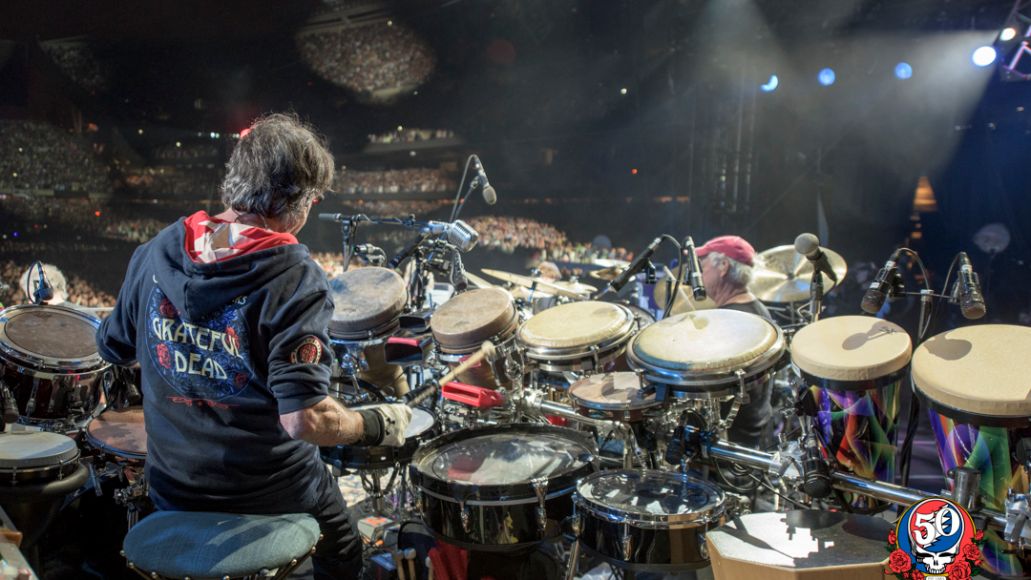 I stood for the whole show between two gentlemen in their 50s. To my left was Josh, a Jimmy Buffett doppelganger who flew here with his wife from the Jersey Shore, and who had seen “only six or seven” Grateful Dead shows prior to this one. To my other side was Daniel from a Chicago neighborhood adjacent to mine. He and his wife had dozens of Dead concerts under their belts, including one in 1992 that he took his mother to, and also took mushrooms to; it wasn’t his favorite night (“You start to think things like, I used to live in there?”). Sonic Youth’s guitarist and resident deadhead Lee Ranaldo was also present. His personal Dead show estimate was 20; the friend he was with guessed 50 for himself. Josh had not heard of Sonic Youth.

Daniel and I spoke on and off through two 90-minute sets and an hour-long intermission about all five decades of Dead. He, like me, applauded the band’s choice to tap Anastasio and thought he was faring “better than expected.” Unlike me, he’s not the biggest fan of Weir’s singing — or, at least, “he did a lot of screamin’ stuff in the ‘80s — that was my least favorite part.” Then he sensed his own criticisms bleeding into the moment and pulled back, addressing the present magic at hand.

“It just brings back a lot of good feelings for people my age,” he said.

Close to midnight, after wrapping up “Franklin’s Tower”, a shaky and moved Lesh took the microphone to address the crowd, to toast luck, to advocate for organ donation (a liver transplant saved his life in 1998), and to announce that the Grateful Dead had one more song to play. Then Bobby picked up the acoustic, laid down an unextended “Ripple”, and it was over.

Short of Jerry Garcia’s actual presence, a set of wholly bizarre circumstances on a football field felt in some ways like the only true, appropriate way to celebrate the proper stoppage of an entity that has embodied perpetual motion as well as any other in American pop culture — through the notes, through the performances, through the MO. If it wasn’t exactly the “finest wine,” it was more fun than a frog in a glass of milk.