Of course the Melvins would be the best cover band in the world, infusing their maniacal sludge into anything that happened to pop into their minds for that evening’s setlist. Last night at Chicago’s Double Door, nearly a third of their show consisted of other people’s material. So maybe I should say they’re the world’s best bar band, dropping those wicked covers in the midst of their own demented riffs, driving the crowd into a sweaty frenzy every single night with a workmanlike insistence. Especially now, with Butthole Surfers’ Jeff Pinkus on bass rounding things out, the Melvins go about things with a stony, full-steam-ahead determination, the sort that comes from working for a long time and picking things up along the way.

Le Butcherettes have found an interesting niche this summer, opening swathes of dates with another legacy act before their Melvins dates. CoS’ Sasha Geffen described their opening for Faith No More as a spiritual kinship, and that holds true with their new touring partners as well. They share roots in classic rock and a fiery, mischievous demeanor, if not tight audible similarities. Whether smacking herself in the face in the midst of the needling “The Leibniz Language” or screaming out the beginning of “I’m Getting Sick of You” from the front of the stage rather than behind her mic, Teri Gender Bender refused to let the crowd stand passively, daring everyone to be anything but physically invested in the performance — and that dare paid off, as the approving howls and bouncing proved. Le Butcherettes work so perfectly as hype for a legacy act, pumping up the perhaps older crowd, but they’ve clearly got the energy to fuel a passionate fanbase as well. 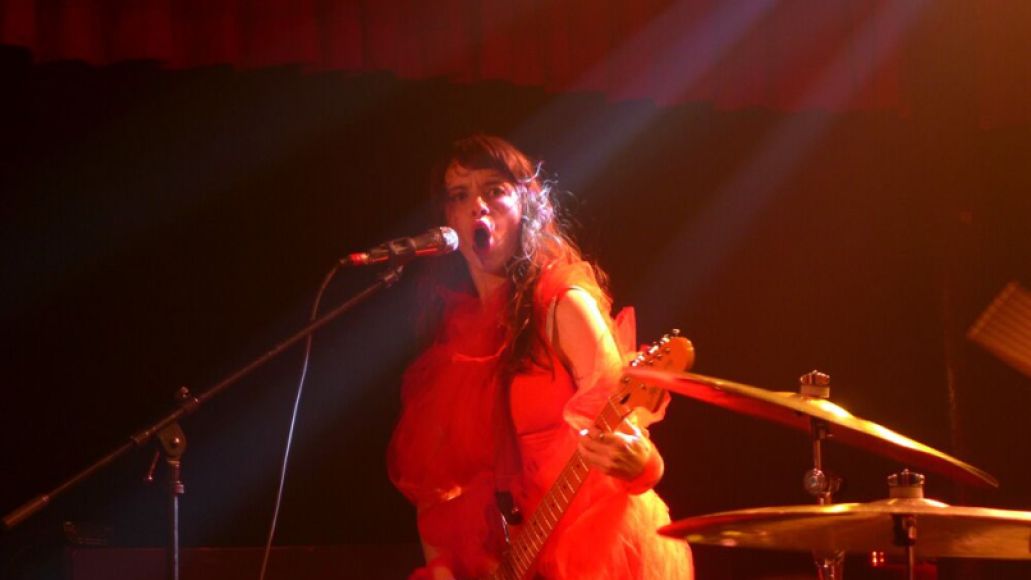 As the Melvins entered to a chopped-up version of Black Sabbath’s “Sweet Leaf”, an unfamiliar viewer might wonder how these three wound up together. Buzz “King Buzzo” Osborne stood like a wild psychedelic mystic with his burst of gray hair and chest-eye-adorned cloak; Pinkus’ sleeveless T-shirt showed off his heavily tattooed arms and neck, no-nonsense tough; and Dale Crover, back behind the kit, wore a sort of alt athletic uniform of black T-shirt, shorts, and fingerless gloves. But, much the way the Melvins’ music seamlessly fuses classic rock, psychedelia, metal, and proto-grunge, any possible division between the three disappeared once they began to play, pummeling their set with barely a breath between massive sludgy riffs.

The trio covered a wide swathe of their catalog, though considering their 30-year history and nearly as many albums, no show could include every fan favorite. But the Melvins weren’t interested in pandering; this set clearly energized the three musicians, Osborne prowling his stretch of stage with aggressive steps, Pinkus letting notes ring free by lifting his bass and either slamming it against his hip or swiping at it with his other paw like a grizzly attacking an upstream salmon. Recent gems like “Sesame Street Meat” and “Bride of Crankenstein” got the same treatment from the band (and intense headbanging from the crowd) as classic monsters like “The Bit” and “Sweet Willy Rollbar”. 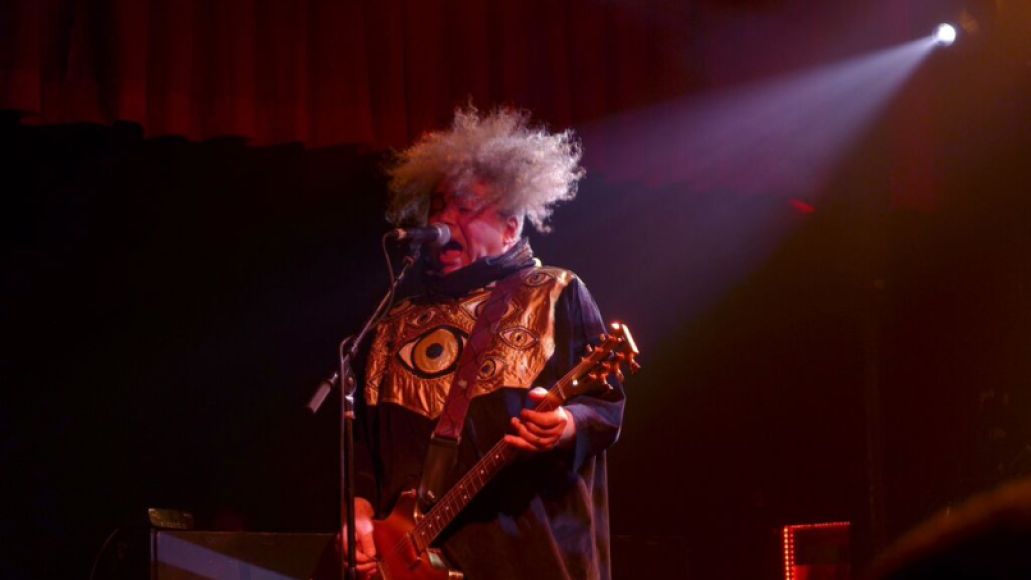 Those aforementioned covers were chosen carefully, exalting influences and showing their diversity. Considering the Melvins’ most recent album, Hold It In, featured two members of the Butthole Surfers (Pinkus and guitarist Paul Leary), the live show included two Buttholes covers. The two bands have always stood just outside of the grunge movement, too weird to make the crossover that many of their contemporaries did. But their connection never seemed as clear as watching Osborne slur and lisp his way through the maniacal satire of “Moving to Florida”, Pinkus’ oozing bass pushing the theatrics into high gear. Their cover of Wipers’ “Youth of America” was particularly inspired; that group’s influence on the grunge scene is well documented, and the weight and speed that the trio brought to the song made it downright explosive.

After delivering a sludgy blow with Houdini heavy “Night Goat”, Teri Gender Bender joined the trio onstage to dish out a couple more impressive covers. The first was a bit on the obscure side: Pop-O-Pies’ “Fascists Eat Donuts”. Teri, Pinkus, and Osborne chanted the chorus (“Make those donuts with extra grease/ This one’s for the chief of police”) over Crover’s incessant pounding, Pinkus’ middle fingers up at the mere mention of the 5-0. That was followed by a booming rendition of “Rebel Girl”, Teri ably taking on the riot grrrl mantle for the Bikini Kill classic. Closing out on an anti-police, pro-female one-two punch capped the night perfectly, all the Melvins aggression channeled into the moment despite the deep-digging nature of the covers. That sort of thoughtful, aware sensibility might not always be obvious through the layer of sludge, fun, and outspoken antics, but anyone paying attention should be able to see that the Melvins are much more than mere pranksters. They’re legends for a reason.