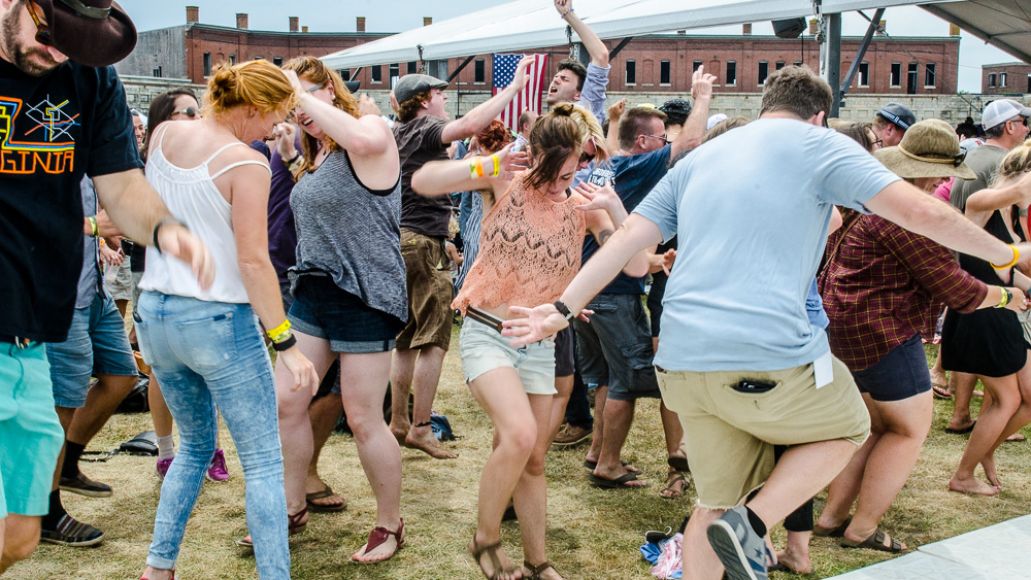 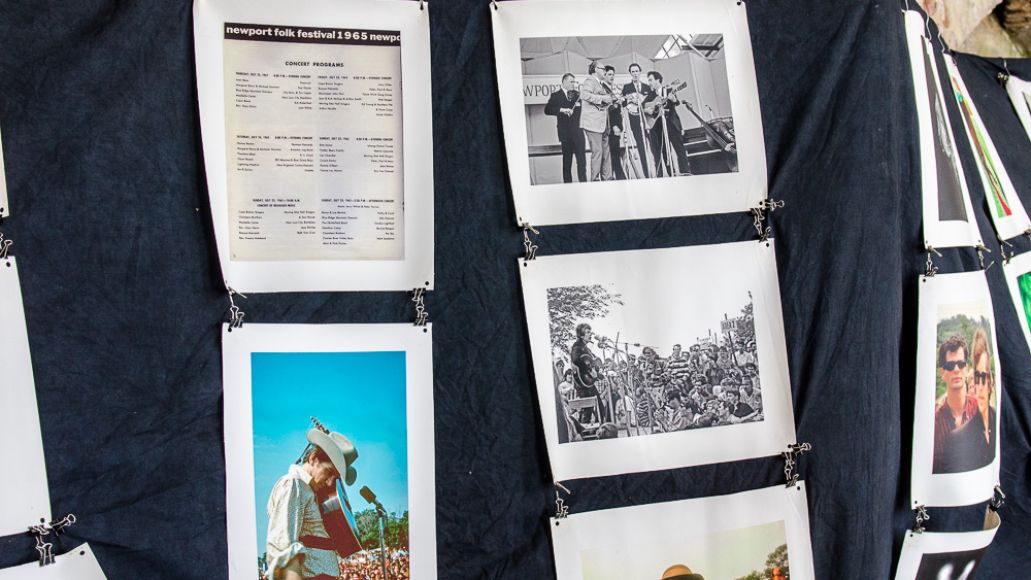 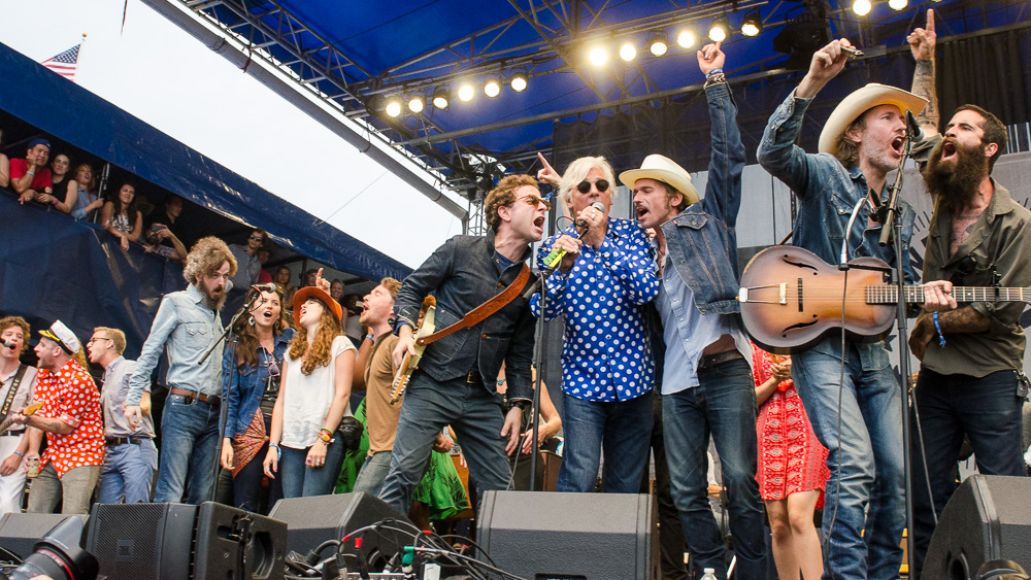 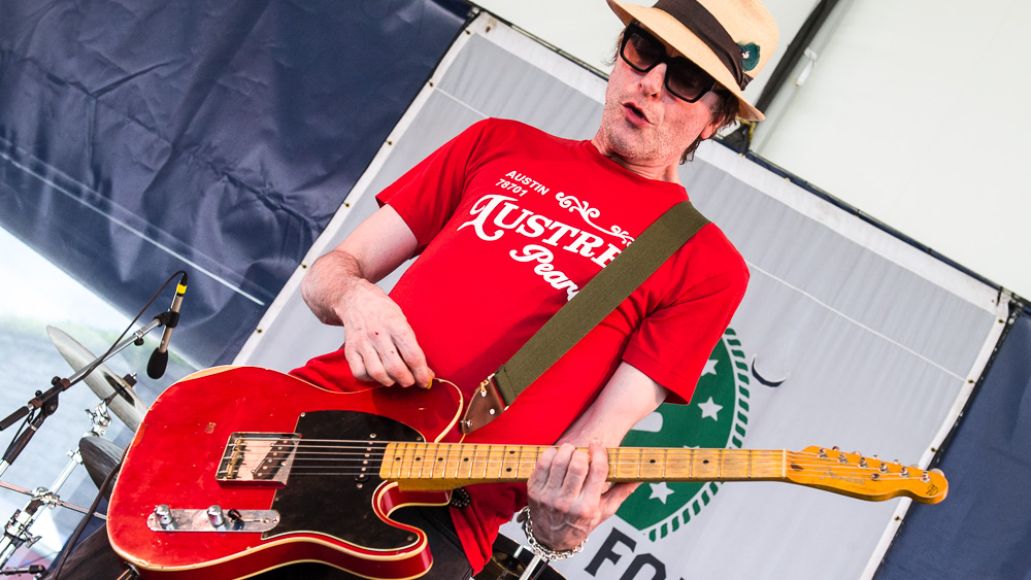 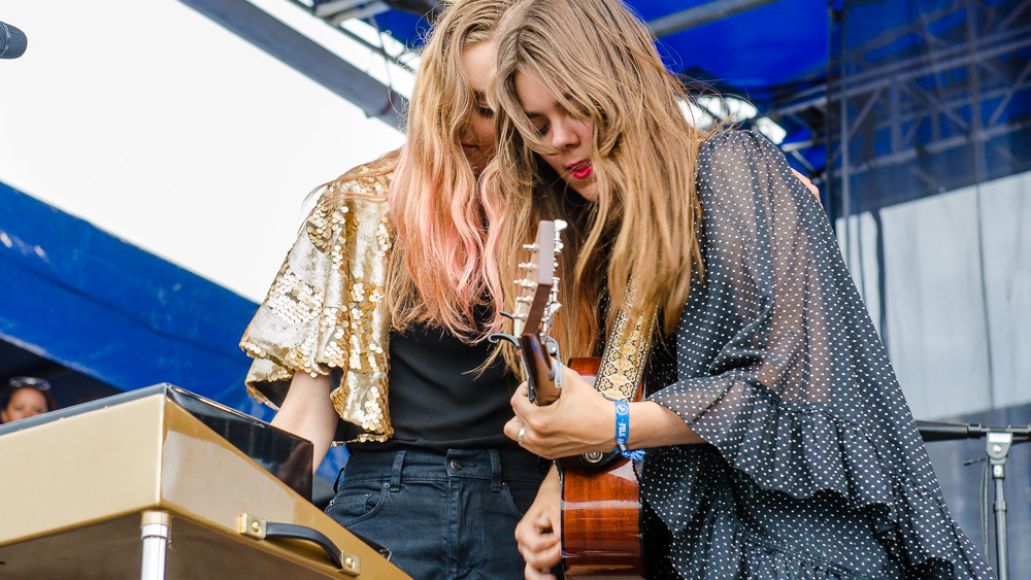 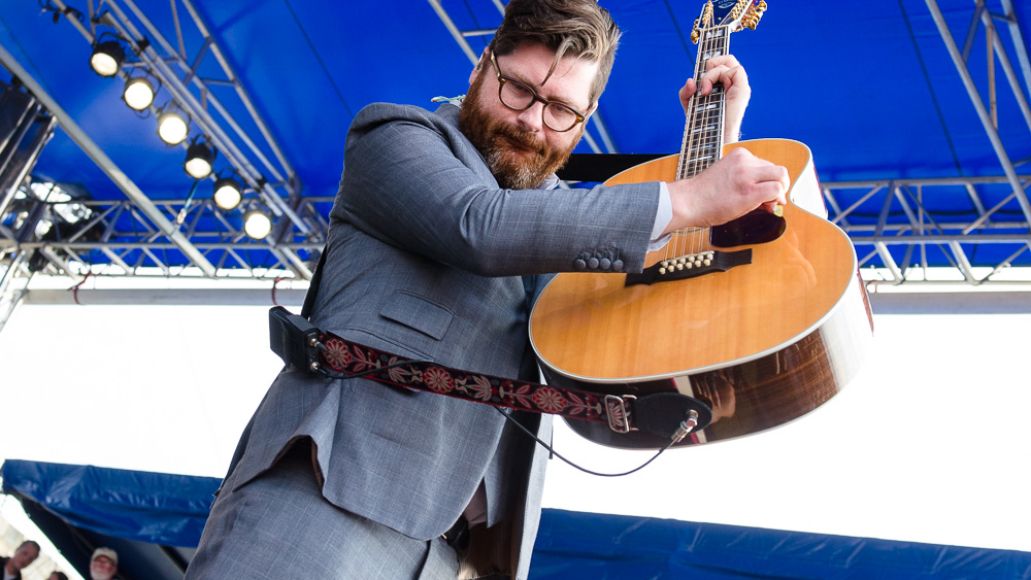 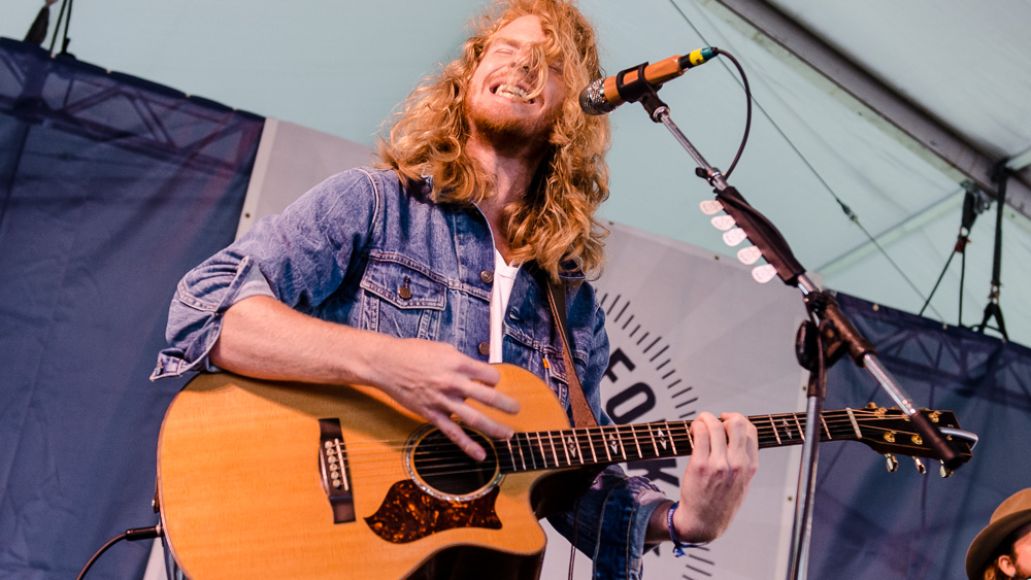 Ballroom Thieves had left me severely unimpressed back in May when I saw them from afar at Boston Calling, but good word of mouth drove me to their set early Sunday. It turned out to be well-worth revisiting the band, as their haunted, heavy folk style definitely played better to NFF than it had to BC. Devon Mauch’s busking percussion, beating his box drum and shaking the tambourine wrapped around his leg, and Calin Peter’s gorgeous and often intense cello work were as powerful as Martin Early’s big, full voice. The band revealed that they’d changed their name at the festival a few years back, giving a nice full-circle feel to a very solid NFF debut. 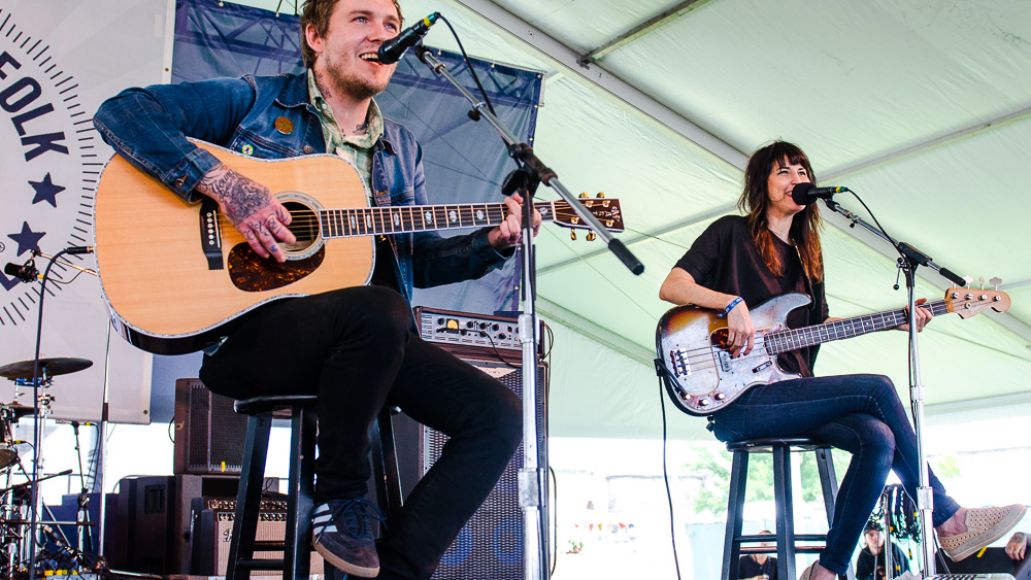 A member of The Gaslight Anthem certainly feels like an outside booking for a folk fest, but Brian Fallon didn’t play a lot of Gaslight songs. Instead, he focused on mostly material from his Horrible Crowes side project, like “Behold the Hurricane” and “Ladykiller”, with that outfit’s guitarist Ian Perkins joining his band on the Quad Stage. Fallon also had that folk fest stage banter down pretty pat, getting so caught up in joking about how his band had never played together as a unit save for some failed attempts at Skype rehearsals it almost seemed like he was forgetting to play music. He also showed incredible love for the NFF crowd, expressing awe at the pure friendliness of the place, saying, “I’ve never experienced anything like this” at a festival. Well, it takes more than compliments to win over the Newport crowd, but Fallon had definitely done it in his own right by the end of his set. 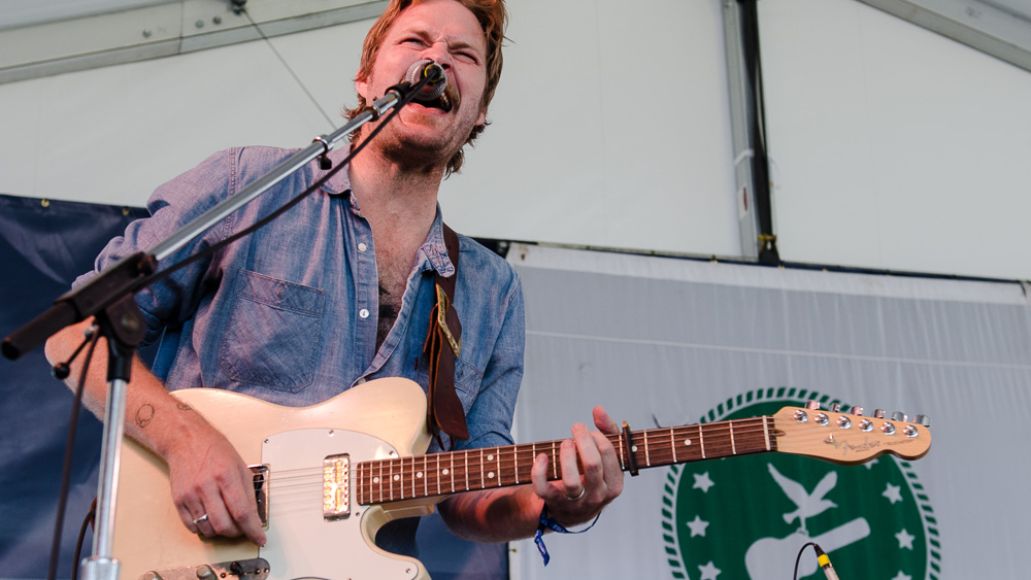 When first encountered with Hiss Golden Messenger’s name on the lineup, no one would’ve questioned M.C. Taylor’s place at a folk festival. Still, the band’s sound came off more like ’70s blues rock than pure Americana folk, especially as Taylor was backed up by the others’ hushed voices during “Brother, Do You Know The Road”; each iteration of, “Yes, my brother, I know” felt more stirring than the last. “Saturday’s Song”, too, felt different live, taking on a rockier bar room strain as Taylor played with short, heavy strums. Much of the music took on an altered form on the Newport stage, ironically swinging further away from “folk,” but it was in no way a downgrade. Besides, all these sounds have a place, a fact perhaps best summed up by Taylor himself when he reacted to a crowd call he couldn’t quite make out: “Did you say ‘Freebird’ or reverb? Because the latter’s cool… The former has it’s place, too.”

The Tallest Man on Earth 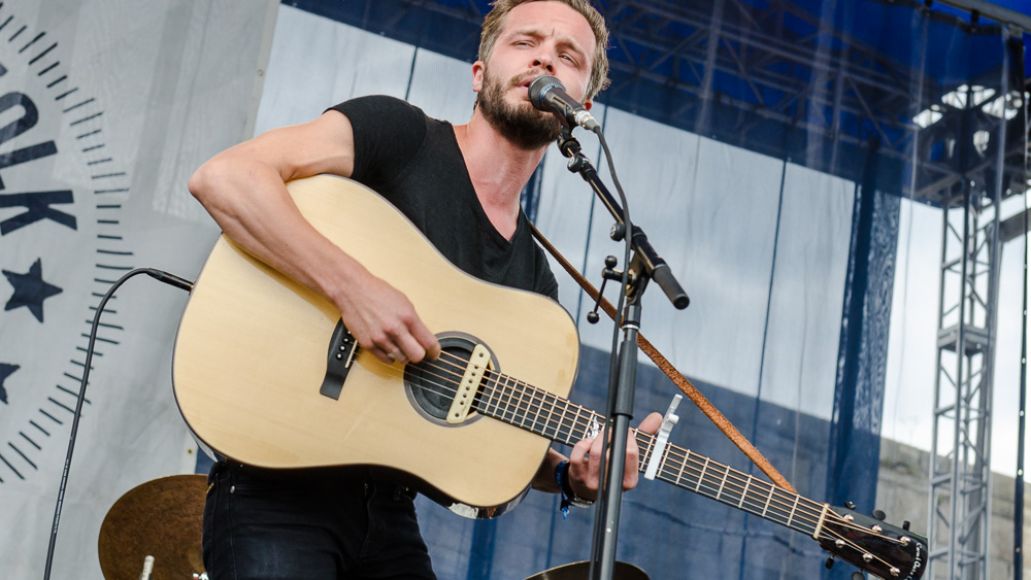 Kristian Matsson is no stranger to taking a Newport stage as The Tallest Man on Earth, but this was his first time on the main Fort Stage. Perhaps the even greater change was the fact that he was backed by a full band this time. He carried both facets equally well, demonstrating the strength of newer material like “Slow Dance”, while giving older hits like “1904” a bigger platform. It all worked remarkably well for the Swedish folk singer, even as he shifted into a quieter solo performance that opened with “Love is All”. Quieter, that is, only due to the lack of a full band behind him; the song felt as full and powerful as anything that had come before. What he ended up proving is that whatever the stage, whatever the size of the sound, it’s his own energy that makes him so damn tall. 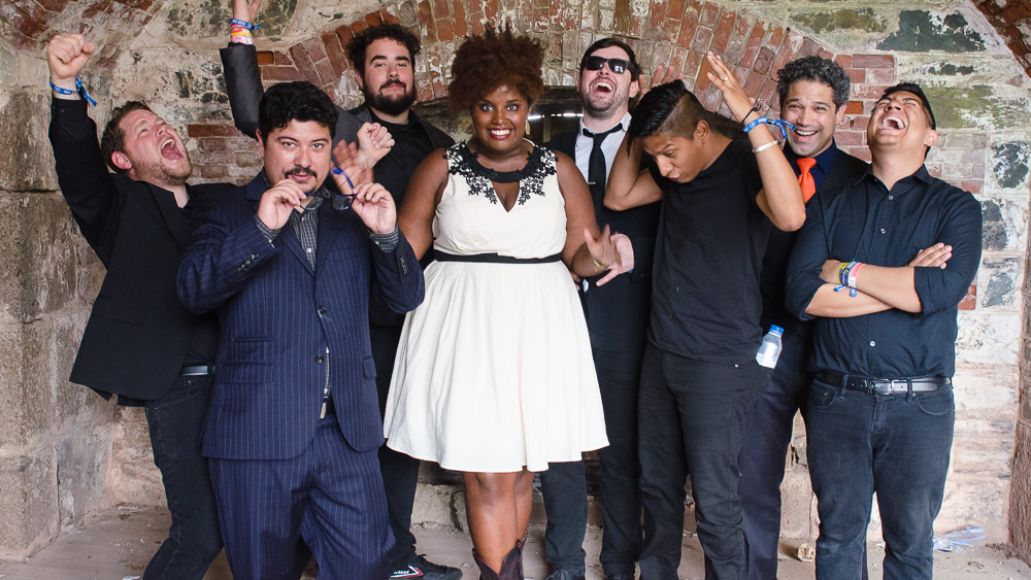 The Suffers frontwoman Kam Franklin made sure the Newport crowd knew who was on stage, asking them to repeat their name and hometown, Houston. The memory trick wasn’t entirely necessary, as anyone paying attention would’ve remembered the big band soul sound regardless. Their music has a Latin edge that kept the energy high and the folks dancing. “Yeah, you didn’t know you were going to the gym this morning, did you?” Franklin joked, as a smiling crowd took a breather between songs. It was a fun, spirited way to kick off day two, and certainly nothing to suffer through.