Taylor Swift famously wrote an open letter to Apple Music and got them to change their policy on paying out artist royalties during users’ free three-month trial period. A day later, a photographer wrote his own open letter to Swift, calling her out for shaking a finger at Apple while her own concert photography contracts were just as unfriendly to artists’ rights. The letter, written by Jason Sheldon, started an internet firestorm, with even more aggressive contracts popping up and other musicians taking heat, too.

Well, wouldn’t you know it, turns out Swift isn’t just able to make big companies change their minds, but is willing to do so herself. Recently, Swift sent her representatives to negotiate a new concert photo waiver with the National Press Photographers Association (NPPA), and the resulting contracts for her 1989 World Tour are drastically more photographer-friendly

Gone are the stipulations that images taken at any show can be used only once, with publications now allowed to freely use pictures “for news or information/editorial purposes” and photographers able to use them in portfolios and on websites. (Commercial uses are still not allowed, though there’s an exception with prior written consent.) Also axed is wording that gave Swift the right to use the images in almost any “non-commercial” way imaginable, replaced with explicit wording saying the images won’t be used on merch. It simply says she could post any picture she likes on social media, and even promises to give full credit. The opening paragraph ends with a perfectly clear, emphasized sentence: “This contract does NOT transfer copyright away from you, the photographer or publication.”

Even better, there’s nothing in there that Swift or her people can destroy your equipment for breaking the rules. Instead, if they catch you breaking the contract while actually at the concert, they may ask to see you images and may ask you to delete them. And that’s completely reasonable.

Holy crap. It actually worked. Check out the revised contract for yourself below: 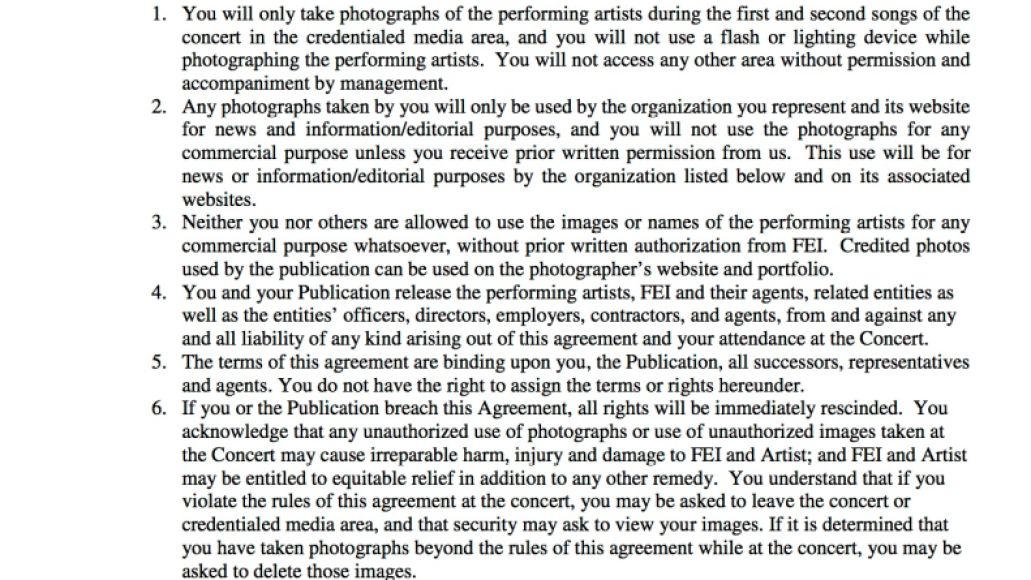