With Mr. Holmes in theaters this Friday, staff writer Zack Ruskin explores why we never tire of seeing our favorite sleuth on screens of all sizes.

The Scene of the Crime

“I am a brain, Watson. The rest of me is a mere appendix.”
— Arthur Conan Doyle, The Adventure of the Mazarin Stone

There is no rest for Sherlock Holmes. From his first appearance in the pages of Beeton’s Christmas Annual in 1887 to his latest incarnation as a role for Sir Ian McKellen in the film Mr. Holmes, the world has maintained a seemingly insatiable appetite for the detective from 221B Baker St. As the property of author Sir Arthur Conan Doyle, Holmes starred in four novels and 56 short stories.

In 1900, he made his first appearance on screen in the one-reel short “Sherlock Holmes Baffled”, played by an actor whose name is lost to the annals of Hollwood history. But this anonymous thespian would soon have plenty of company. According to the Guinness Book of World Records, Sherlock Holmes is the most portrayed movie character in history, with more Holmes-inspired books, plays, television series, and films perpetually on the horizon. 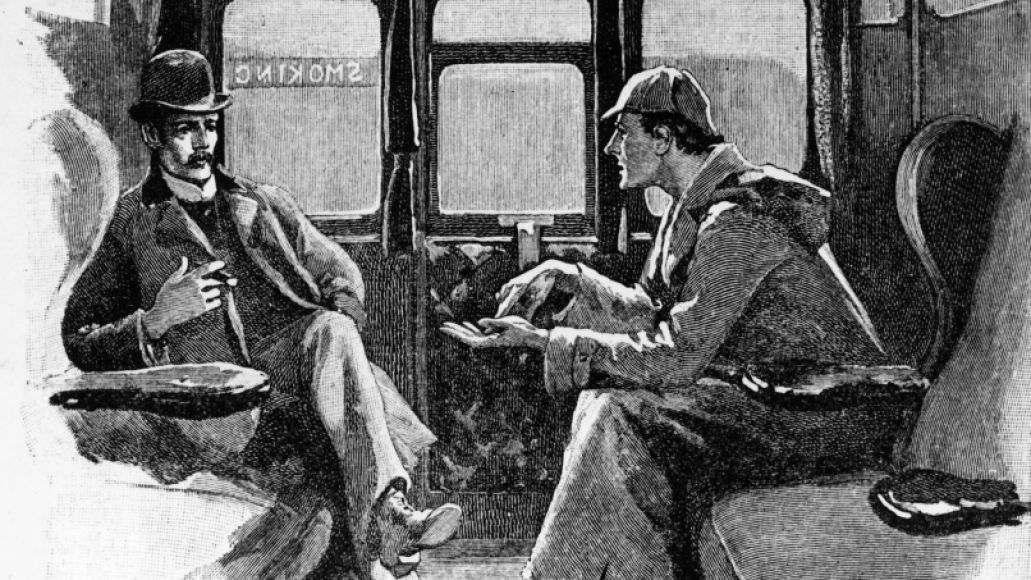 In recent years, three notable actors have taken up the mantle: Robert Downey Jr., Benedict Cumberbatch, and the aforementioned Ian McKellen. These men are hardly the only people to have played Holmes in some capacity as of late, but with the possible exception of Jonny Lee Miller (of TV’s Elementary), these three actors have had the most exposure for their respective portrayals of the world’s most famous sleuth. How curious then that, when comparing these projects, save the character names and the setting of London, they are so vastly different from one another. What unifies them – Holmes – is paltry compared to what separates them – just about everything else.

“Sentiment is a chemical defect found on the losing side.”
— Sherlock (BBC)

Sherlock Holmes loves to slap box. He is an adept fighter, using his powers of deduction to preplan his attacks and leave his opponent stunned. This is the Holmes director Guy Ritchie brings to the screen in 2009’s Sherlock Holmes. The film, much like the rest of Ritchie’s work, is full of brash, stoic men and the oddball characters they encounter. The absurd is acceptable, and wit is only worth as much as the muscle of its speaker. Robert Downey Jr. serves admirably in the role of Holmes, gifting the character his charming affectations, explosion-filled heroics, and chummy repartee with Jude Law (as Watson).

Sherlock Holmes is, without question, an action film. In many ways, it more closely echoes a James Bond film set in Victorian London than it does the work of Doyle. So, why take the character of Holmes and place him in a story that, aside from a busty Irene Adler and the lurking presence of Professor Moriarty, keeps little of Sherlock’s world in tact? The answer lies in our collective adoration of the Sherlock Holmes legacy, a collection of stories and sayings and names that brings with it an inherent understanding. 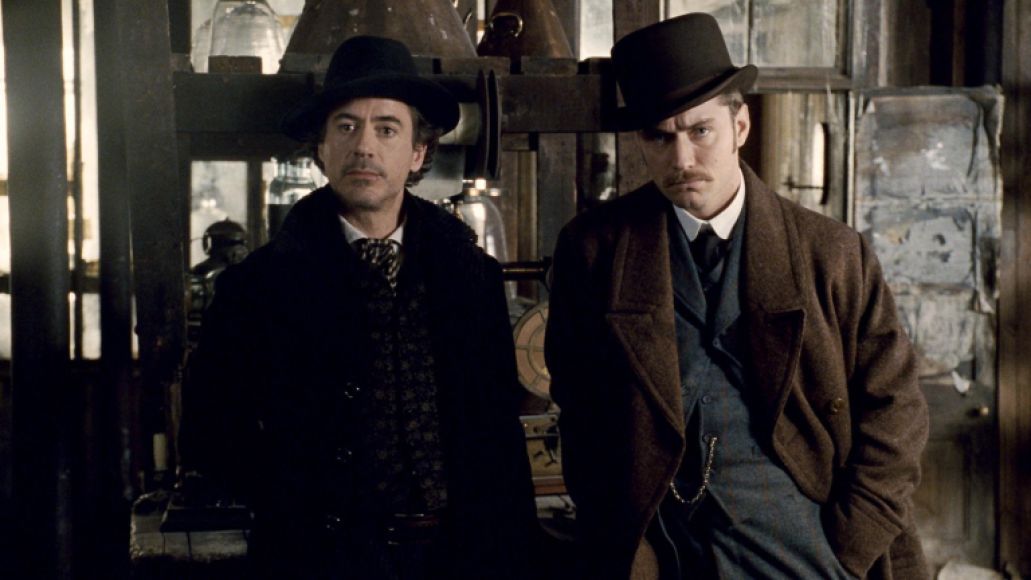 The Holmes canon has, in more recent times, functioned as a launching pad of sorts. A filmmaker, like Ritchie, or a novelist, or a playwright is gifted a set of characters, and a location too if they so desire, on top of which they can construct their own ideas, weaving an original narrative atop something everyone already has at least a passing familiarity with. This works because culturally we’ve established the believability of Holmes as a detective and as a character we trust, affording directors a jump-start in the story they wish to tell by not having to establish the detective’s credibility.

Let’s apply this theory to the next major Holmes portrayal to chronologically appear: the BBC’s highly lauded Sherlock series. Creator Steven Moffat is far less liberal with the elements of his story than Guy Ritchie, with each episode (in this case, an episode runs about 90 minutes and serves more like a film) using a Doyle story for source material. There are still, of course, major changes from the original text, mainly that Sherlock is set in the present day. But there is also something in Benedict Cumberbatch’s work as the titular detective that again plays into the notion that Moffat is using the Sherlock brand for his own means. 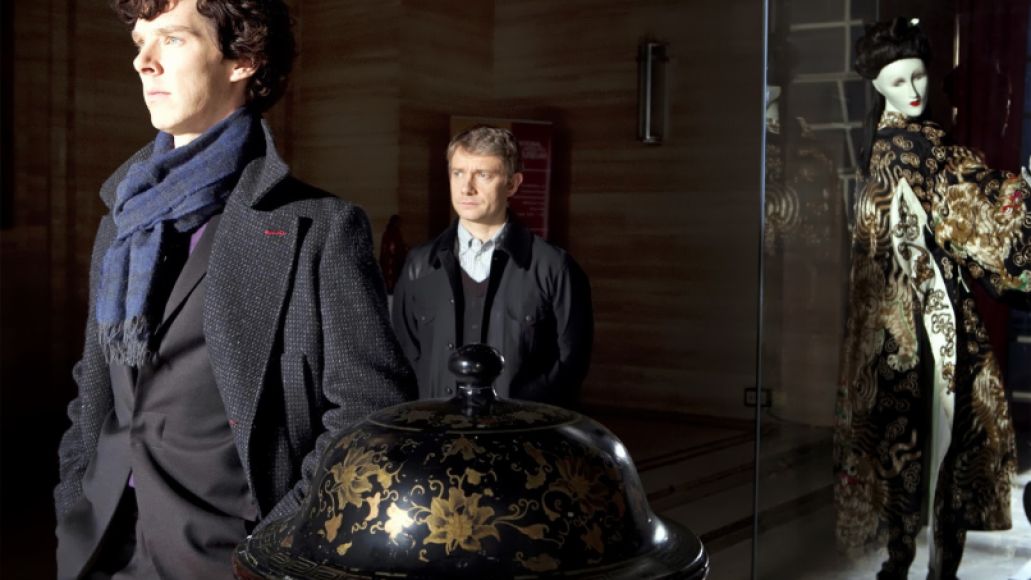 While Doyle always wrote Holmes to be standoffish and aloof, in Moffat’s Sherlock, he is socially alienating to the point of potentially being on the spectrum for Autism. Cumberbatch expertly embraces this challenge, relaying Sherlock’s confusion, disregard, and impenetrability with grace and believability. Make no mistake: this is the matter Moffat is eager to probe – at what cost does true genius come? How much can one friendship endure under exceedingly trying circumstances? Moffat also has a wonderful mind for mysteries, so why reinvent the wheel when you can graft these dynamics and plotting onto characters everyone is already willing to follow pretty much anywhere?

Pitting Downey Jr.’s Holmes against Cumberbatch’s, we can see that they have little in common beyond their names and addresses. The former is a boxer, a charmer, and a sleuth who enjoys nothing more than impressing himself. The latter is anti-social, brilliant beyond all reason, and rarely happy about anything. These are two wholly different portrayals of the character, neither of which prioritizes treating the source material with absolute faithfulness. Yet there is a reason why both bear the name Holmes, and their reliance on the heritage of Holmes is apparent and vital to the story. Can the same be said when Sherlock is a 93-year-old man suffering from dementia?

“I’ve decided to write the story down; as it was, not as John made it. Get it right, before I die.”
– Mr. Holmes

Mr. Holmes is about a man at the end of his life. He retired long ago, but he cannot stop thinking about his final case as a detective, which centered around a young woman whose death has always stayed with him. His former partner has written an account of the case, but this man is convinced it may not be the whole truth. Unfortunately, his memories are slipping away, making the effort of finding satisfactory answers quite difficult. A compelling story, to be sure. That this man is Sherlock Holmes, and his former partner Watson, is the final component to our case at hand. 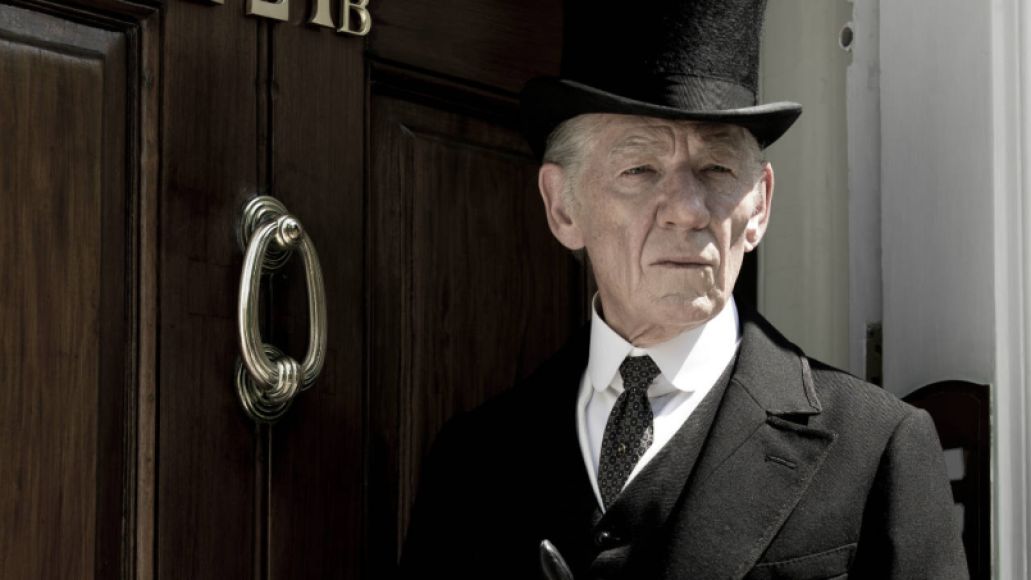 The story outlined above minus the connection to Sherlock Holmes is interesting in and of itself. It’s a logline other movies have explored, but one that is rich for eliciting powerful performances and substantive revelations. Films like About Schmidt and Harold and Maude have mined this territory, but every film festival seems to annually have a film that showcases an older actor as a character trying to make sense of the life behind them. While both Mr. Holmes and the novel it draws its source material from, Slight Trick of the Mind, do indeed have a mystery as part of their plot, the elements of self-discovery are what anchor the film. The reasons for Sherlock Holmes and Sherlock to utilize the Holmes character are clear; what reason does Mr. Holmes have to do the same?

If a book were to start with the line “the president died,” it would mean less than if the same book began “John F. Kennedy died.” In the latter sentence, we have a context of time (the 1960s), of setting (most likely the United States), and of emotion (sadness, shock, numbness). When this idea is applied to Mr. Holmes, the character likewise receives the benefit of context.

No longer is a generic detective losing his memory; Sherlock Holmes, the greatest detective to ever live, is forgetting the stories that all of us know so well. McKellen appears on the screen, and already we know so much about him: his backstory, his dislikes, his enemies, his triumphs, his peculiarities. Certainly the film must still reinforce these ideas and be a strong product on its own to be worth its merit, but by adopting Holmes, it has freed itself to accomplish those things without needing to spend a second on character development. This is not a crime – it’s genius.

Many people complain that modern films are lacking in plot. There are explosions or sensual interactions, but nothing happens. I disagree. What is often most lacking in contemporary cinema are characters: real, living people who I want to see succeed or fail. Christopher Nolan’s trilogy of Batman films has as much solid action as its two flaccid predecessors: Batman Forever and Batman & Robin. The difference is that in the latter two films, the characters are cartoon exaggerations of people, whereas in Nolan’s work, they are people first and superheroes second.

For this reason, we welcome the reinvention of Sherlock Holmes on an annual basis. When we see Holmes – be it duking it out in a boxing ring, interrupting a banquet, or mourning in a cemetery – we can focus on the plot knowing that the characters are solid. We can afford to care about these men, whether they live or die, if they find the answer before time runs out, without worrying our invested interest will be squandered. In a world of diminishing returns every time we venture into a theater, that is a promise worth resurrecting Holmes for.

Although, to be fair, he was never really dead.

The Role's Afoot: The Eternal Appeal of Sherlock Holmes at the Movies