A festival lineup announcement is a familiar yet always thrilling experience for music obsessives. From the initial shock at seeing bands you didn’t even know were touring on the poster to the inevitable disappointment of scrolling through boring picks instead of your favorite band (who just released an album and really should be coming), the beats are pretty straightforward each time.

Along the way, there are always questions about the presentation of the lineup. Whether it’s confusion as to why Sturgill Simpson is listed above A$AP Rocky or how Touche Amore got listed two lines above Riff Raff, every festival poster has sparked countless debates that boil down to a question that never seems to get resolved: How do music festivals decide the order of their lineups on the poster?

In theory, every festival takes a similar approach. The headliners are at the top, and then the acts are listed in descending order of popularity, with the smaller, local artists at the bottom. Beyond that, it’s fair game, as every festival appears on the surface to have their own system for arranging festival posters that are usually intuitive but often baffling. In order to get a better understanding of how these decisions are made, Consequence of Sound reached out to a handful of festivals across the country, large and small.

We spoke with the individuals responsible for four different weekend festivals around the country:

When it came to the process of arranging posters, each representative said that each festival has its own way of doing things. There are a few things that most festivals have in common; for example, FYF doesn’t start arranging the layout of the poster until all the acts have been booked, and Fun Fun Fun Fest will use placeholder names but wait until the lineup is finished before deciding what goes where. 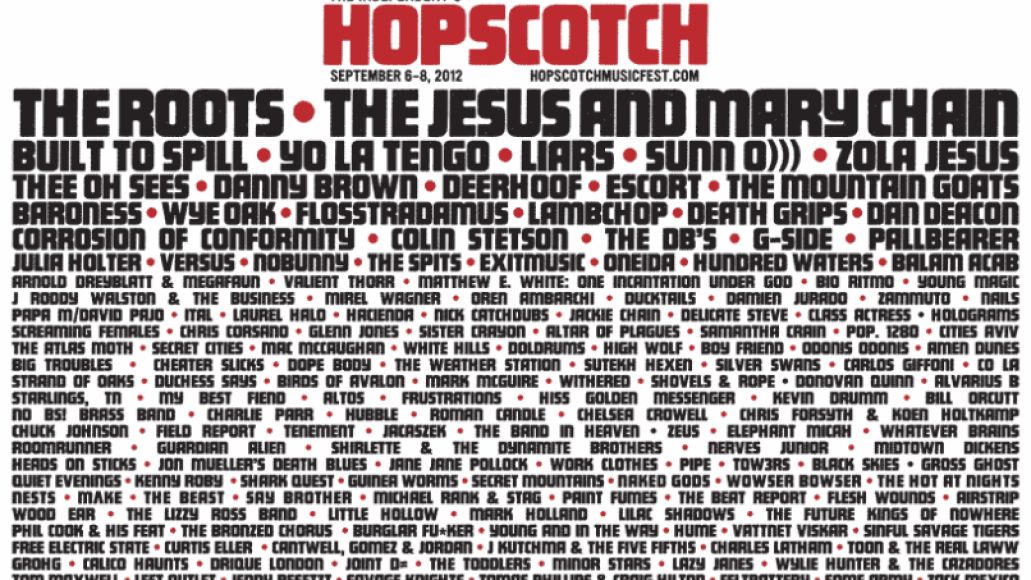 For each festival, the decision-making process primarily comes down to a handful of individuals who have been working at this for years. While many factors go into the process, the decisions are typically not made by a large committee, but rather a small group. For Lowenhagen (Hopscotch), keeping things concentrated is important. “We don’t have anyone else working on our lineup, and even if we did, it would be too many people trying to give input on a process that should stay as simple as possible,” he said. 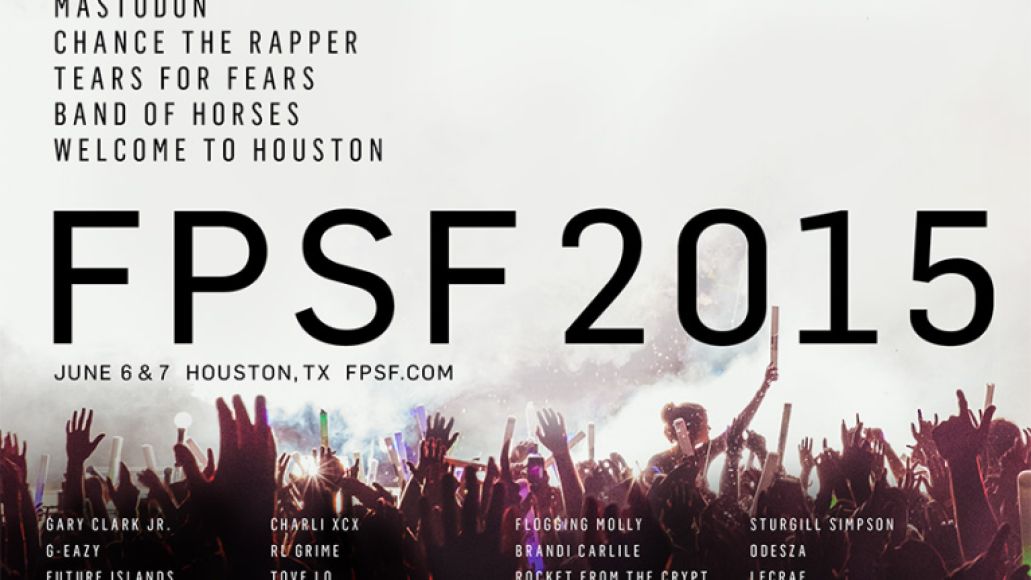 Another fairly common aspect across festivals is that there is no clear line dividing touring acts from local acts when it comes to the lineups. According to Katial, “Just because someone is a local band or a touring band doesn’t guarantee placement. Especially with the Houston music scene growing as it has, we are going to have more and more touring bands who are local to Houston.” For Hopscotch, Lowenhagen remarked that in the first year, there were local bands listed among the top six acts and that if a local act is a bigger draw, they will be listed above smaller touring acts.

How the Poster Relates to the Schedule 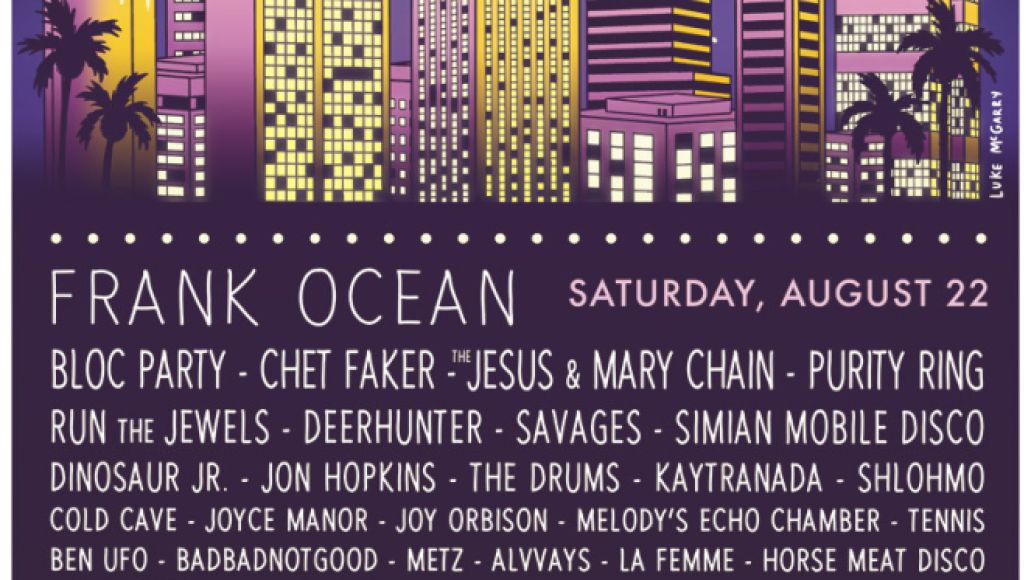 The impact of the schedule and set times has a different effect on lineup posters depending on how they are arranged. For a festival like Fun Fun Fun Fest that has all three days lumped together on the poster, set times don’t really impact the arrangement outside of the implied promise that headliners will be listed towards the top. For a festival like Hopscotch that lists its lineup by day and is spread across multiple venues, the natural makeup of the festival impacts the list.

Lowenhagen explains that while there is judgment involved, the way they lay out the poster becomes “naturally evident” as they put headliners like Pusha T or Battles, who’ll play a 900-person venue, on top of artists playing 150-capacity bars, and so on and so forth. On the other hand, while FYF presents a festival poster separating the lineup by day, they don’t take the schedule into account as much.

“There are bands that play that are billed very high on the poster, but play early sets,” Carlson explains. “The schedule’s about the vibe and what fits best. It’s not about playing last or later times, but where the artist makes sense.” 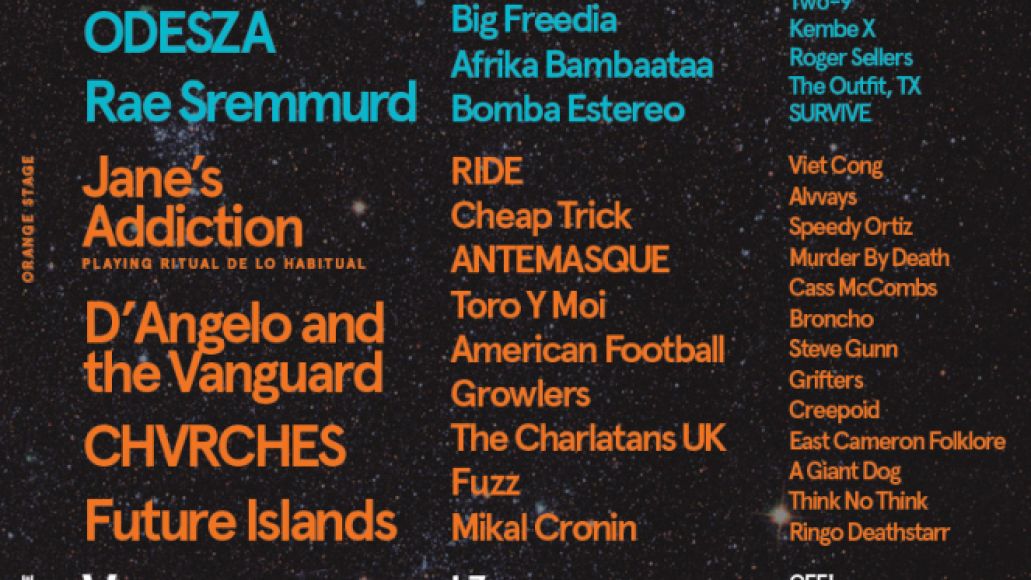 Each festival uses a set of metrics as guidance for arranging the lineup, but none of these serve as a be-all and end-all template for putting things together. A long list of factors such as ticket sales, video hits, social media followers, streaming plays, and genre come into play. For each festival, each factor matters to varying degrees. Katial indicates that, for FPSF, what often affects the order is graphic design — the number of letters in an artist’s name may impact a placement decision more than statistics. For Carlson of FYF, how a band performs in various markets, locally, nationally, and internationally, has an impact on where they are placed. Ticket sales, album sales, and a band’s touring history are important factors across the board, but social media metrics aren’t as impactful yet.

Social media measurements are used, but not everyone holds them up to the same level. Lowenhagen mentioned that Hopscotch may check Facebook to see which of two bands headlining 300-capacity venues should be put above the other. But social media often skews in favor of younger acts and may not be indicative of the draw a reunited legacy act can bring. As Williams of Fun Fun Fun Fest explains, when Neutral Milk Hotel headlined the festival in 2014, they had recently sold out two nights at a 5000-capacity venue far in advance. “They had, like, 40,000 Facebook followers. They probably just set up their page as they had just reunited, versus some bands that have 400,000 followers and sell half as many tickets, if that,” Williams said. While measures of popularity are important, sometimes it comes down to pure judgment and the festival organizer’s gut instincts.

Of all the issues and factors that festivals take into account when designing their posters, management and booking seemed to have the widest discrepancies across the board. While Riot Fest declined to speak in depth, a press contact for the festival indicated their belief that the lineup layout is usually a result of negotiations with the artist and their management. According to Williams of Fun Fun Fun Fest, agents and managers can present one of the bigger headaches in developing lineup posters.

To put it less delicately, “I’d bet every festival promoter hates the shit out of it,” Williams said. He conceded that the agents probably don’t enjoy the process either, but the constant pressure of hearing things like “we’re bigger than that band, we sold out Terminal 5, we have more social media followers, etc.” can cause undue stress. “Often you’ll have a number of acts that are similar in popularity and draw, and it’s really hard to decide who goes before another,” Williams said. “I can totally understand how some festivals do all the same font size or alphabetical order.” 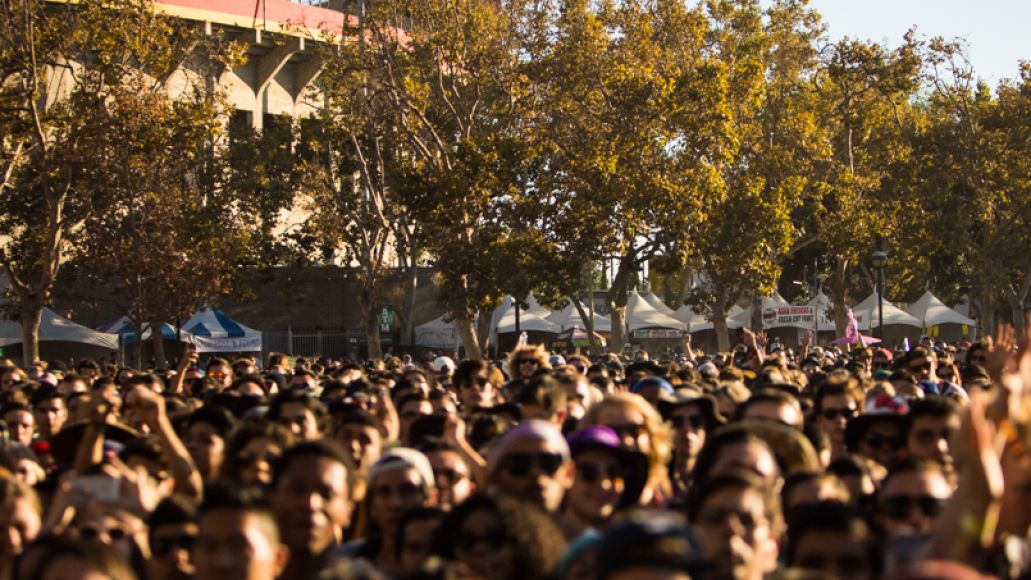 On the other side of the spectrum, some festivals don’t incorporate deals with management as a part of the poster layout process at all. As Sean Carlson of FYF put it, “It depends on the festival you’re talking to, but for us it’s not in that place,” adding that “the average fan can figure out the festivals that do that, probably.”

When an artist or agent contacts a festival about their placement, as in the handful of times Hopscotch has been contacted in their six years, sometimes the festivals will concede to an oversight and amend the situation. Other times, Lowenhagen and Hopsctoch have disagreed and kept the artist where they were initially listed. The entire process is a delicate one when it comes to taking the artist’s wants into consideration. “Artists work hard, and I think for the past 10 to 15 years, a festival lineup has become a place, for better or worse, where they see their name next to others, and they want to be represented appropriately,” Lowenhagen said. “Some bands definitely don’t give a shit where they’re listed. Others do. I can understand both sides.” 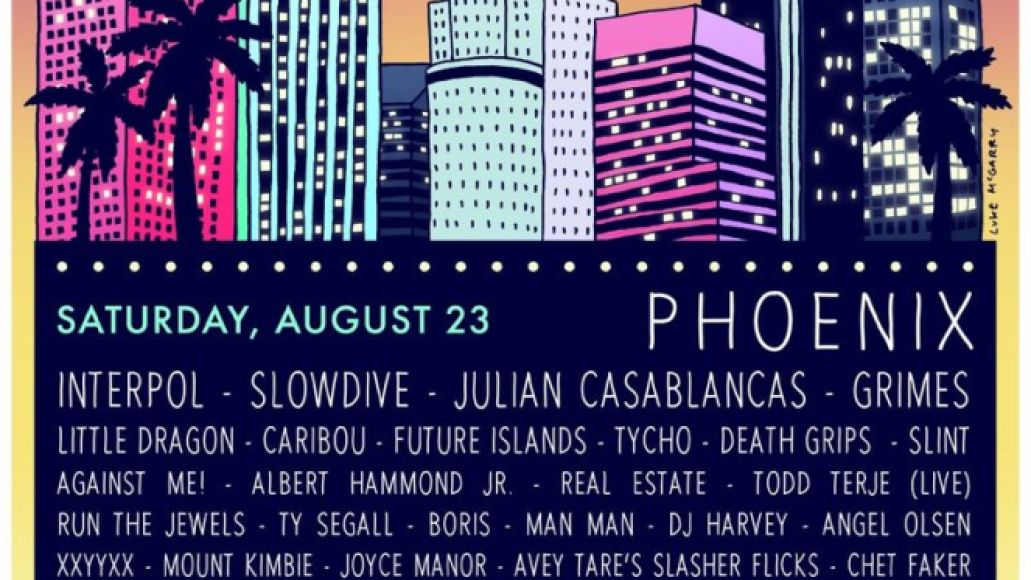 For every festival, the practice of arranging the layout is a delicate art that takes a great deal of time, information, and judgment. Festivals know the order of the lineup is something both fans and artists care about and don’t take that lightly. “I see people screaming about one being billed under the other,” Carlson (FYF) said. “I respect that because it shows the fans care. I like the fans that are questioning, but I think the decision I went with made more sense.”

For festivals, every step in the process of booking bands and presenting the lineup is a balancing act. Posters that display the lineup are the first thing people see when deciding whether to buy a ticket, and the way that lineup is arranged can have an effect on the fan’s decision. As Lowenhagen (Hopscotch) puts it, “Anything lineup-related is important because aside from the onsite experiences we’ve provided in the past, the lineup is the one thing we’re really selling to the public.” 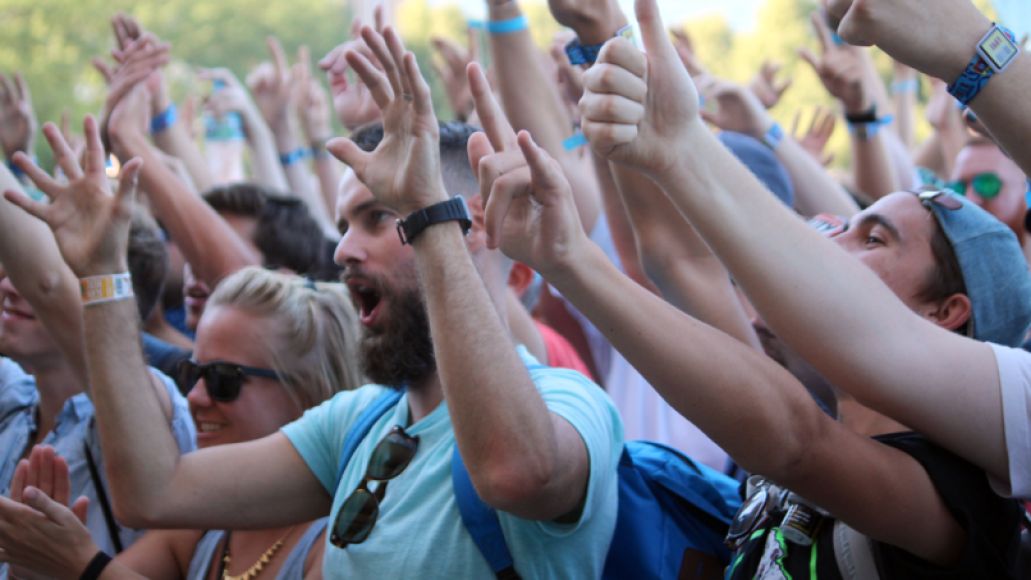 While the listing of names displayed on a poster isn’t as important as the actual bands that are playing, in an environment becoming oversaturated with festivals that take place all throughout the year, every part becomes important. There’s a reason that most festival lineups aren’t listed alphabetically, or as Williams (Fun Fun Fun Fest) explains, “If you’re paying more for bigger acts, it’s because they sell more tickets than others, so why bury Yeah Yeah Yeahs at the end of your lineup because they start with a Y, but have a smaller act that starts with an A at the front? People breeze through lineups, so you want the biggest stuff to be the first thing fans see when they look at a poster.”

Many times, the order of festival lineups don’t make sense. Artists are placed above or below each other in ways that baffle many music fans. Whether it’s because of concrete measurements, judgment, or contracts with artist’s management, more often than not there is a definite reason why the lineup was arranged the way it was. It may not always make sense, but for many festivals with experience, the arrangement of lineup posters is the result of a great deal of care and work rather than haphazardly filling out a template.

How Do Festivals Pick the Order of Their Posters?