Ever wonder which movies inspire your favorite bands or how filmmakers work with artists to compile your favorite soundtracks? Sound to Screen is a regular feature that explores where film and music intersect. This month, Blake and Randall Colburn are here to help each other out and celebrate the 50th anniversary of the Beatles’ film Help!.

Blake Goble (BG): Randall, I’m gonna be upfront with you. I love Help! I really do. I love the globe-trotting, the onscreen charms of John, Paul, George, and Ringo, and Richard Lester’s free-spirited music video storytelling. I love that the Beatles made feature films like Help!  — and of a quality that few, if any, other musicians have achieved (read: Crossroads). I think Help! is a medley of delights, a burst of heart. And yet, I don’t like it as much as A Hard Day’s Night.

Or the fabulously disastrous and hard to obtain Let It Be.

But that’s so moot! It’s like comparing A’s and A+’s. Damn Beatles and their lasting legacy. We’re here, now, talking about these films, Help! specifically, 50 years later, because of the enduring appeal that their cinematic joy ride Help! keeps alive. It’s a classic with delightful design and production, a certain joy for being young and fun, and of course, timeless music. Randall, isn’t it obvious why we’re here to talk Help!?

Randall Colburn (RC): Help! reigns supreme to me, but there’s no way it couldn’t. It’s the film that introduced me to the Beatles, not to mention absurdist comedy and dry wit. I was five or so when I first saw it, sitting on the floor of our home in Roseville, MI. It was one of my parents’ favorite movies. They taped it off HBO, and it was a staple of our home VHS collection for decades. I remember, so vividly, hearing “Help!” for the first time and those shivers of recognition that accompany the best pop hooks. Every song in Help! – “You’ve Got to Hide Your Love Away”, “Ticket to Ride”, “You’re Gonna Lose That Girl” – was my favorite song at some point or another.

What separates Help! from a movie like A Hard Day’s Night, I’d say, is that it has such appeal for children. All those bright, garish colors, the shifting milieus, and, most importantly, the absolutely batshit plot.

RC: For the uninitiated, Help! centers around Ringo, who becomes the target of an evil Eastern cult because of a ring that was given to him by a fan at one of their recent shows. To protect Ringo, the Beatles flee to exotic locales like the Austrian Alps, Scotland Yard, and the Bahamas, but are pursued every step of the way by a motley crew of villains, which expands beyond the cult once a mad scientist and his bumbling assistant get involved.

It’s all very zany, packed with breakneck chases, sloppily choreographed fights, and tanks. Yes, tanks AND cannons. It’s nuts. But there’s also an undercurrent of bone-dry wit that appeals to me as an adult. John Lennon and George Harrison, especially, had a real flair for screen acting, with each able to deliver a punchline with the perfect amount of punch.

BG: “I’m always getting winked at these days. It used to be you, didn’t it, Paul?”

Heh, no one realized that George could be that cute and witty, not just the shy secret guitar weapon.

RC: What say you, Blake? What works best for you in Help!? 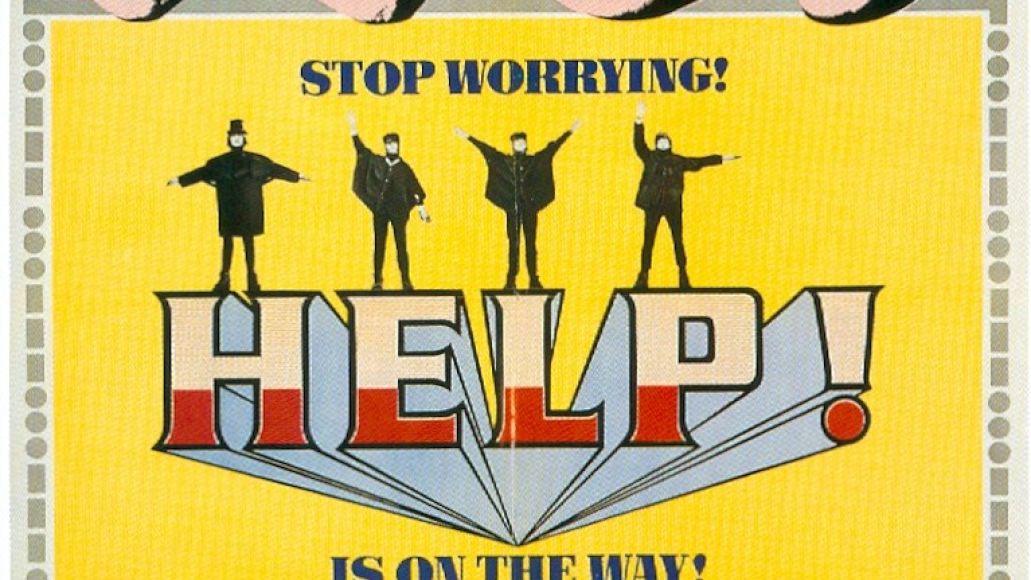 BG: So to back up, I envy your jollity for Help! I grew up on Lester’s other Beatles hit, A Hard Day’s Night. I always viewed Help! as the Beatles going Hollywood, escalating their onscreen cinematic presence with exotic locales, nifty sets (I’ve always wanted to live in the Beatles’ four-colored home), sight gags and props (Ringo getting stuck in a ring-shaking machine comes daffily to mind), and frankly, a weaker, less funny script. The at-times arbitrary globe-trotting adventure could’ve used the snap and crackle of Alun Owen’s Hard Day’s work. Or maybe it was the band’s introduction to weed on set that helped them goof up all their lines … How many times can you Abbott and Costello lines about the Bahamas?! Remember when John and George say “ho” like two dozen times, and Lester feels compelled to spell the joke out in subtitles?

I barely remembered the global ring plot until you reminded me, actually.

And yet, it’s still a pure Beatles movie, full of tunes and a genial mood. And that’s what I love about it. From their frolicking in the snow to the eponymous theme song to the boys getting in the mood over a smooth rendition of “You’ve Got to Hide Your Loving Way”. They’re not affable or disciplined; in fact, they’re testing the limits of our patience for their hijinks at times, yet they’re goofy and still cute.

And Lester, that free spirit and spunky director, was working with full creative control and colorful aesthetics; he was clearly amorous of the boys. It’s like every shot is a ‘60s pop-up advertisement for the band. Don’t you just love seeing the Fab Four connected by a scarf, on skis, moments before wiping out on a hill? Or what about when they’re hanging on for dear life in a perfectly blue bathroom because a hand dryer’s on the fritz? They look good doing loony things; what more do you want? Who cares about the Beatles hanging out in some sort of desconstructionist, silly variation on a C-grade Fleming story when they look so good doing it?

Randall, I think I just love this because it’s a Beatles movie, albeit an inferior one. Seven fresh songs and seven more on the soundtrack? And as a Beatles film, the soundtrack is just killer, right? Help! gave us “Yesterday”, so, the movie’s a win for giving us that song alone. Though, isn’t it funny how the film incorporates stuff like “The Barber of Seville” and the actual Monty Norman James Bond theme? It was meant to be a screwball spoof of Marxian proportions, and in that light, it’s legit – a bunch of goofuses do goofy things. Wigs, Randall! Hysterical!

RC: Watching Help! reminds me of the second season of The Monkees when Davey, Mickey, Mike, and Peter gave cocaine full reign over the show’s editing. Bits existed for the sake of bits, sound effects popped unnecessarily, and comedic notes recklessly oscillated between zany and subtle. It’s fairly obvious The Monkees were inspired by Lester’s work, and I wouldn’t be shocked if modern comic touchstones like Arrested Development and Wet Hot American Summer counted Help! among their influences. No joke is too sophisticated or too stupid. Hell, one of my favorite bits in Help! is when the band’s curious, unexplained hobo manservant cuts the apartment’s interior “lawn” with a pair of chattering teeth.

Timeless comedies, I’ve noticed, rarely place an emphasis on plot. They traffic in well-worn stories and themes, then subvert the audience’s expectations with whatever’s unique about their comedic voice. I guess that’s how I’ve always seen Help! and why its lackluster script has never bothered me. The plot is almost comically simple: bad guys chase Beatles, Beatles run, Beatles unwittingly avoid death, change of scenery. But the bits? They’re complex. The performances, too, often feel improvised. The band’s hilariously understated reactions to near-death are comic gold.

What both helps and hurts the movie is the racist and cartoony Eastern cult. Their garish, out-sized presence threatens to eclipse the dry wit that made the Beatles so appealing in A Hard Day’s Night. But they also give the film a foot in absurdist comedy, creating an atmosphere that feels unstable and spontaneous. Their silliness also makes them a natural fit for the film’s myriad musical numbers, some of which are woven into the fabric of the world, some of which are pure fantasy.

Speaking of the music, would you say those musical vignettes – pre-cursors of the modern music video template – are more important than the film itself? I imagine many of the film’s first audiences were more excited about those than the story.

BG: Absolutely. Frankly, all the Beatles’ films matter most definitely in the pre-MTV era. They created a new aesthetic for music montage, inventive blends of sound and image. By focusing less on plot and more on cutting to the beat, Help! and other Beatles films show the perks of just making musicians look good, or attention-grabbing, while their music plays. And while Help! doesn’t reach the euphoric, visual peaks of Hard Day’s and Yellow Submarine, it shouldn’t be discounted at all. There’s a reason the four boys in caps on a snow bank is lasting iconography. Even Lennon, who totally dissed the film upon initial release, and blamed Lester for lack of direction, came around years later, calling Help! a sort of pre-cursor to shows like Batman. And he’s right. The movie was zany, hyper, musical inspiration – even if it’s hard to see first pass, under that “haze of marijuana.”

Outside of Ed Sullivan, what were the best ways to indulge in the Beatles onscreen in 1965? 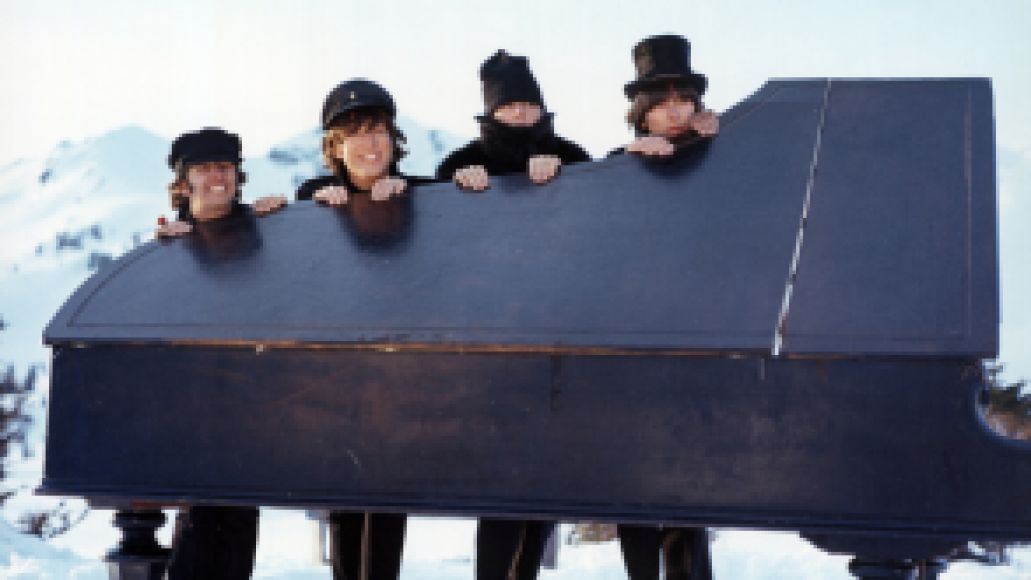 RC: That’s a good point and perhaps hints towards why movies such as these don’t really get made anymore. Back then, actually seeing the Beatles in person was an honest-to-god event. Now, with social media, we’re treated not just to an artist’s output but to the ins and outs of their daily routine. Taylor Swift’s status as Instagram icon is, in many ways, completely separate from her music. There was no such access to the Beatles. They were characters, not people.

This humanizing of our pop icons is maybe why the modern iterations of Help! or A Hard Day’s Night are concert documentaries like Katy Perry: Part of Me or One Direction: This Is Us, movies that combine live performance with backstage access and origin stories. The last attempt to spin fiction around a mega-popular pop group that I can recall is 1997’s Spice World, another nutso fantasy that, like Help!, was critically maligned upon release but remembered fondly in the modern age. P.S. From Justin to Kelly doesn’t count.

BG: That movie would be about Beyoncé fighting Twitter.

Hot Fuzz Knew the Secret to the Perfect Action Satire

How The Beatles and Richard Lester Made a Pretty Neat Movie Out Of Help!