In the 2014 documentary No Cameras Allowed, we watched one guy crash more than 50 festivals around the globe, including Bonnaroo, Coachella, Glastonbury, and Austin City Limits. An upcoming film is looking to take that idea to the next level by following seven different people as they journey through a three-day festival.

Simply titled FESTIVAL, the documentary examines these individuals’ various experiences, as well as festival culture as a whole, aiming to be “an honest and detailed look at why our generation attends massive events, what is sacrificed, what is gained, and why it matters.”

Says the film’s director and executive producer Michael Raspatello: “This isn’t a concert film or a behind-the-scenes look at any one festival. It neither vilifies nor glorifies the festival industry. This is a collection of stories from real individuals, a snapshot of what happens when 100,000 people descend on a festival weekend.”

Alongside footage of the FESTIVAL’s protagonists — a group of men and women whose ages range from 20 to 40 — the documentary promises never-before-seen clips of HAIM, Duke Dumont, and Benny Benassi. There will also be cameos from industry veterans, journalists, historic segments about Newport Folk and Monterrey Jazz, and archival video of festivals past, such as Lollapalooza 1.0 and Woodstock ’99.

The folks behind FESTIVAL have launched an IndieGoGo campaign to help offset some of the film’s costs. Check it out here.

Watch the official trailer below. 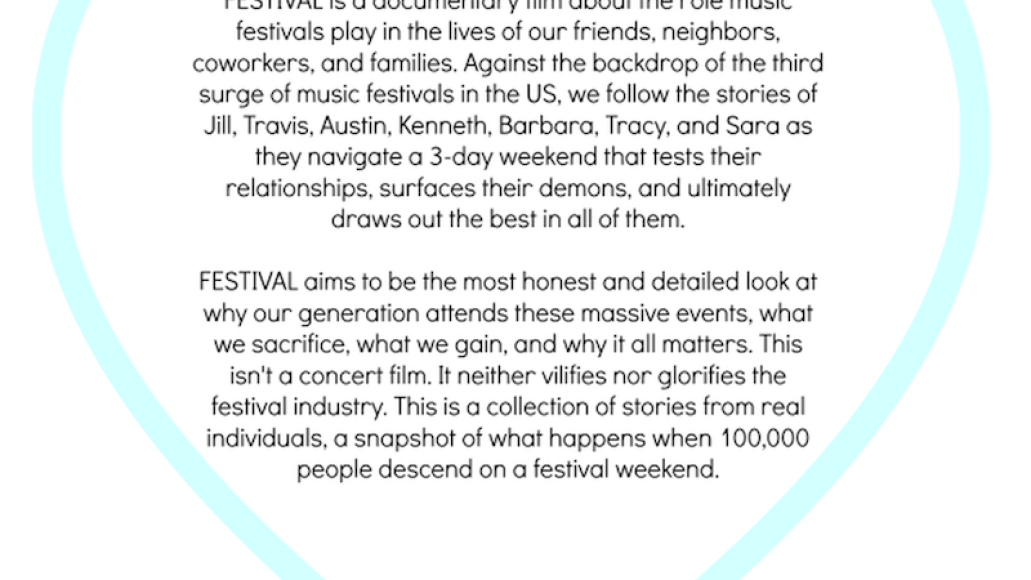