There’s an Elizabeth Hardwick quote I love that comes to mind every time I leave the country: “Your first discovery when you travel is that you do not exist.” When you leave home, you strip yourself of your own context. You find yourself free and invisible in a place where no one knows you and where the everyday rules you take for granted don’t apply. That disorientation is powerful even when you’re doing something you do all the time, like watching bands play for a few thousand strangers as the sun sets over a city.

Before I came to Norway for Øya Festival, I hadn’t crossed the Atlantic since I was 18. I had never been to Scandinavia, though I revered it in an abstract, mythic way because of people like Björk and Karin Dreijer Andersson. The image I had of Norway was that of tall, blonde women hovering effortlessly across meadows at night. 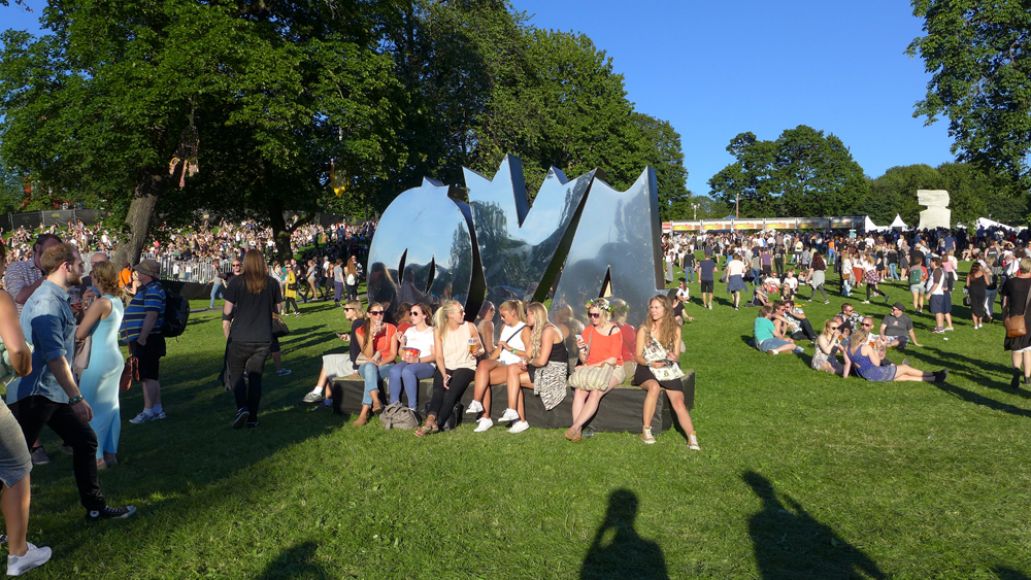 As far as I know, everyone in Norway walks through their meadows, but there is a feeling of magic and whimsy among the musicians who call the country home. I saw a tall, blonde woman play a ukelele at the top of an Olympic ski jump, for what it’s worth, and I saw plenty more tall, blonde people (and some shorter brunettes) play post-metal and electro-pop and jazz and dark disco — the usual range. Øya Festival has a strong sense of national pride, with a huge fraction of its slots going to locals, including the last day’s headlining spot. It’s also the most gender-balanced major festival I’ve ever attended; while I haven’t crunched the numbers, I think that if you took all the acts with no women off the poster, you’d still have about half the fest left over.

Because festivals in the United States are increasingly fraught with corporate monopolies and actual deaths, I’m always curious to see how other places do things. Øya’s a big festival, hosting about 10,000 people a night, but it’s a slick and pleasant affair, cleaner than most minor street fests here in the States and surprisingly light on the substance abuse. The only major corporate sponsor I noticed was Pepsi, who set up a big tent in the middle of the grounds. A few Norwegian companies advertised products with names I couldn’t understand at smaller stations across the campus, but none of the music felt indebted to non-musical entities. Øya was a self-sustaining environment where everyone recycled and nobody lost their shit.

As a city, Oslo seems to follow a similar maxim. It’s quiet and clean and lovely, and its winding streets and ocean air remind me of my home city Boston on a good day. I got to watch Scandinavian women sing from the top of a steep hill and swim in one of Norway’s fabled fjords. It was a good place to find out how little I exist.