This week’s Straight Outta Compton may not be the American cinema’s first biopic centered around a rapper, but it’s among them, and it’s on the most difficult topic to date: N.W.A.

Ice Cube, Dr. Dre, Eazy-E, MC Ren, and DJ Yella were all young men when Straight Outta Compton the album was released in 1988, which makes its primal yell of violence, grief, and rage in any and all directions all the more affecting. To use a reference you’re probably going to see a lot in the next week or two in relation to the film and/or album, Dr. Dre’s opening declaration that “you are now about to witness the strength of street knowledge” is one of Compton’s most enduring declarations. The strength of street knowledge amounted to millions of records sold, untold millions of parents developing new phobias about what their children might be hearing when they leave the house, and a complicated but nevertheless essential legacy.

N.W.A. shocked the system, after all. Compton was among the first-ever records to carry the Parental Advisory label, one created a few years prior in 1985 when Tipper Gore became incensed by Prince singing about masturbation on “Darling Nikki”, or so the legend goes. N.W.A. were scandalous then and now; then, they were credited with the widespread corruption of American youth, they went on to be debated as both pioneers of the hip-hop form and misogynistic, violent souls, and even over a quarter of a century later, the film chronicling their lives has been hailed as being both of its own time and of this one and a protective measure designed to ensure that the members’ legacies live on in specific, particular ways. 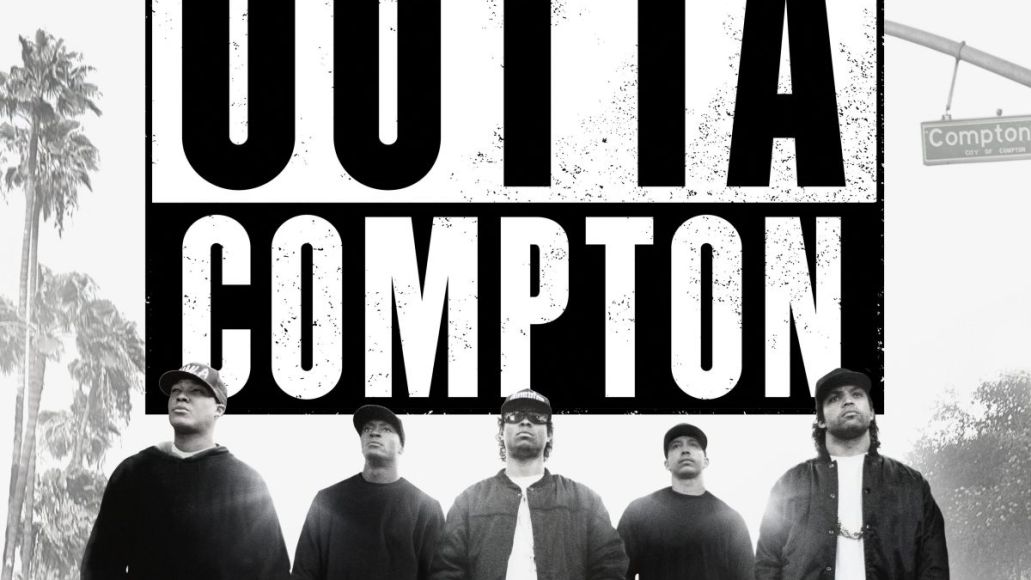 It’s difficult not to empathize with that latter perspective, to at least a certain degree. After all, again, the rap game biopic is a new filmic subgenre. The music biopic hardly is; it’s a tradition going back for decades, a maneuver that allows actors to race to the front of the Best Actor/Actress line at the Academy Awards every year. Less cynically, it’s also a means of making history more tangible by humanizing it. In this respect, at least, the existence of Straight Outta Compton as a film is in itself more than a little bit remarkable. In 26 years, N.W.A. went from the most dangerous rap group in the world to producers of their own story; Ice Cube and Dr. Dre have producer credits on the film, and Cube’s son O’Shea Jackson Jr. plays his father. In this way, N.W.A. both cements its legacy as an essential part of the modern musical canon and gets to tell its own story in a way for which the media of the time scarcely allowed.

To reiterate, the rap biopic is a relatively new game, and Compton is by far the noisiest one to date. While in recent years Aaliyah was given the Lifetime treatment (controversially so) and the Notorious B.I.G. was chronicled in 2009’s Notorious, these weren’t films released into prime, late-summer real estate. And to be perfectly candid, Notorious didn’t exactly set the world alight in its rendering of Biggie’s life as a series of bullet points, one after the next, with only sporadic insights into exactly how Christopher Wallace became one of the most well-known artists in America by his early 20s before tragedy befell him.

This isn’t so much a criticism of the film itself as it is of the typical form of the musical biopic. Typically they’re predicated on what comedian Patton Oswalt once described as the “moment of irony,” in which the film satisfies viewers already knowledgeable about a certain topic by working in any number of tacky signposts throughout in which various recognizable historical bullet points are worked through, as though making manifest a Wikipedia entry on the subject. The best biopics (Sid and Nancy, I’m Not There) tell their subjects’ stories from their perspective, not from a third-party one approved by the mere passage of time. So, in this way, hip-hop has truly arrived in the canon of our time, because now legendary artists in the rap game also get to have oftentimes forgettable movies made about them, to be honored as luminaries of the form.

Compton also stands out because of how the rap biopic has been handled up to this point. There haven’t been that many done, in the grander scheme, and Notorious is the only major notable to actually reach theaters. Compounding that is the way in which rap biopics were previously handled, and for an example, let’s head back 13 years (oh dear) to the Oscar-winning 8 Mile, which reassembled Eminem’s formative years as a fictional narrative, or 2005’s Get Rich or Die Tryin’, which saw 50 Cent follow suit. The hip-hop story on film has often been recontextualized as a rags-to-riches saga, one that focuses away from the circumstances that so often engender hip-hop’s existence in the first place and on the artist as misunderstood craftsman. 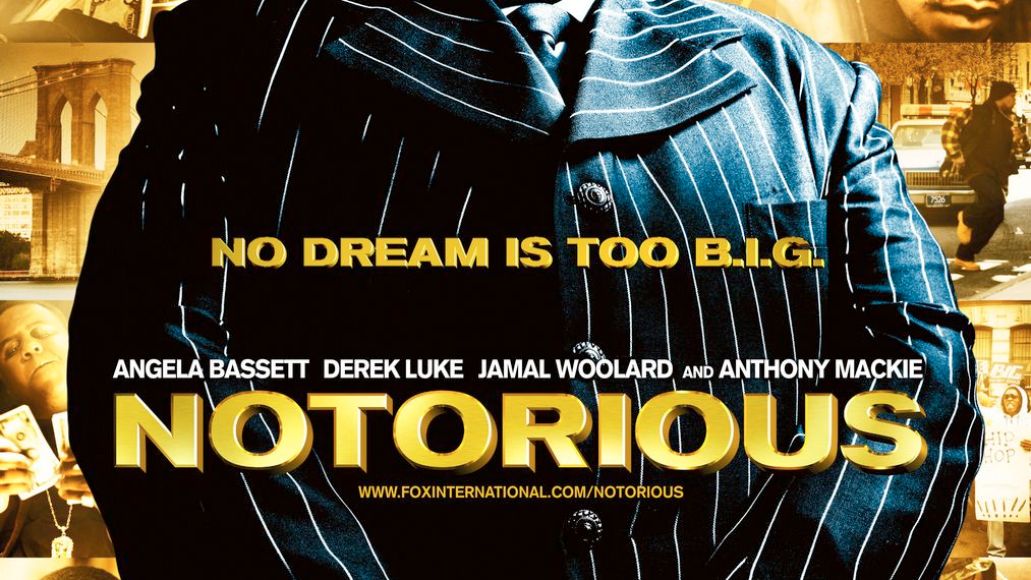 That’s what makes Compton so striking: it’s precisely fixated on the social circumstances that led not just to N.W.A. coming into being, but to them becoming one of the more simultaneously venerated and feared musical acts of the era. F. Gary Gray’s film approaches rap history as American history, and that this could be considered something of a radical approach says quite a bit about how it’s been handled, historically. To see N.W.A. graduate from a source of mass cultural panic to the subjects of what’s likely about to be a hit summer movie is to see a shift to a culture that would not only want to see this movie, but could relate to it.

We’ll sidestep talk of the film’s prescience, for if you look up just about any review of it that’s been published to date, that observation has and will continue to be made. If anything, Compton represents both a landmark moment for films about music and a bit of a worrisome new paradigm as well. Because Cube and Dre are so actively involved in the film, it’s hard not to wonder about the sidestepping of some of the more valid and less racially motivated criticisms leveled against the group over the years: the rampant misogyny, the domestic violence incidents, the violent posturing that had ripple effects for years after Eazy-E was gone and the group had fallen into ruin amidst a fit of infighting. To obscure these equally relevant facets of the group’s legacy is to risk falling into the same traps that so many other musical biopics have and do: accentuate the good, cement the legendary status, and downplay anything that doesn’t fit into that narrative. 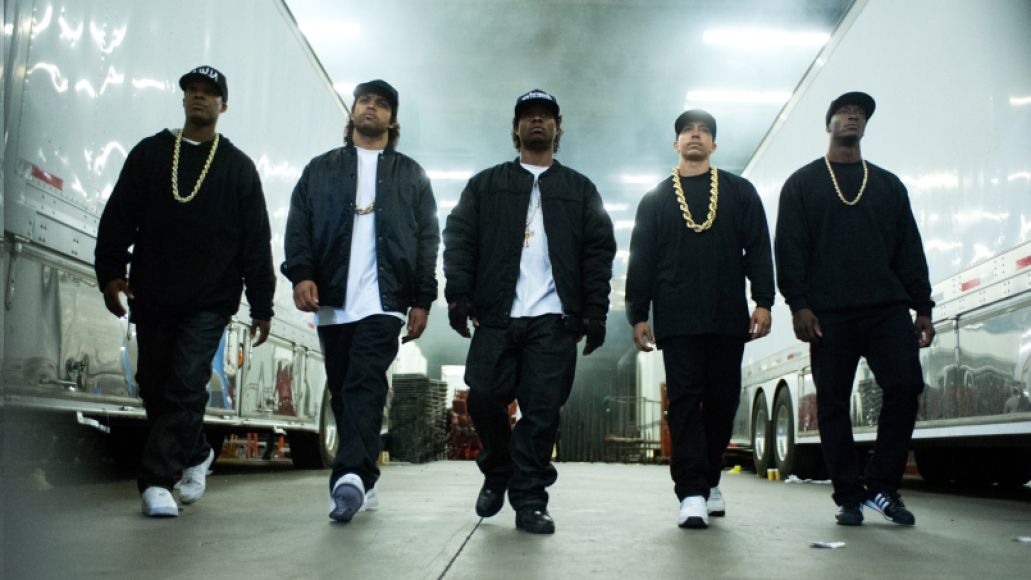 Whether we like it or not, films about artists (especially well-made ones) help to shape and reinforce the long-term memory of who they were, what they did, and what came from that. In this way, Compton is both striking and a point of concern unto itself. It won’t be the last of its kind; a 2Pac biopic has been discussed for years, and should Compton find the success expected of it, it’s more than likely that others will follow. Now, the strength of street knowledge appears to be the capacity to recall a different history, one that went ignored or willfully misunderstood in its time. Straight Outta Compton the film will likely be as divisive as Straight Outta Compton the album, but the film’s mere existence means that, in a fashion, N.W.A. won. Amidst the stories of Dylan and Cash and Darin and Valens and Charles, now you also have the stories of Cube and Dre and Eazy and Ren and Yella. Now you have the story of five rappers who some thought were going to destroy the world, released by Universal, into a culture that’s turned their music into late-night comedy fodder. Oh, how the times do change.