Welcome to Sidekicks, a new feature that celebrates the greatest (and oft-forgotten) partners-in-crime within film and music history. Today, Film Editor Justin Gerber kicks off the series by dialing it back three decades ago to the day Michael J. Fox’s werewolf coming-of-age comedy, Teen Wolf, howled through American cinemas.

How cool was Stiles for those born in the latter years of the generation defined as X? Pretty cool.

For the uninitiated, Stiles was the best friend of Scott Howard (Michael J. Fox) in 1985’s Teen Wolf, a high school film about basketball, love, and, of course, dealing with that old pubescent problem of turning into a werewolf. Stiles was no werewolf. Stiles was the guy cheering on the sidelines. He was the one making the best (and, in one awkward instance, the most dated) jokes. He schemed, but never to rip off anyone. He was an entrepreneur, looking to capitalize on the rising success of his werewolf best friend and the rising game of said best friend. Simply put, Stiles was the best of the ‘80s teen comedy sidekicks.

Jerry Levine was 27 when he played Stiles, the perfect age of a high school student in any feature film over the past century. It’s the reason why so many of these student characters seem so old to us when we’re in our pre-teens: because they truly are too old to be playing these parts. Despite looking and acting older than a teenager, Stiles still had issues getting a keg of beer for a birthday party. I blame the mean old man at the liquor store, but I’ll always defend someone looking to have a good innocent time. Unless he’s on a skateboard in a busy street. Screw those guys. End of old man rant.

Despite all of his shenanigans, which included faux-surfing atop a moving van, hosting games at keggers, and selling t-shirts at basketball games, Stiles relied on his friends to have a good time. A psychoanalysis of the character indicates that he was probably neglected as a child and suffers from severe depression, with an overwhelming need to be constantly accepted by others. But this movie isn’t about him! It’s about Scott Howard, a pre-Back to the Future Fox and his coming to terms with being a werewolf, dealing with a rival high school basketballer, and deciding between a young woman who is right for him and who is clearly not.

This is what makes Stiles who he is. By making him the sidekick, whatever issues he has at home are not relevant. He provides the humor in a cast of characters largely devoid of it. Scott’s crying about being a werewolf. Boof, the love interest, is shy. Lewis is a shy nerd. Chubby is … okay, Chubby provides some laughs, but they’re mainly lazy fat jokes. It’s Stiles who comes in like a bat out of the Catskills. Take for example this winning joke:

He also had the best t-shirts. “Life Sucks Then You Die”, “Obnoxious: The Movie”, and the near-legendary “What Are You Looking At Dicknose”. Even It’s Always Sunny in Philadelphia knows what’s up: 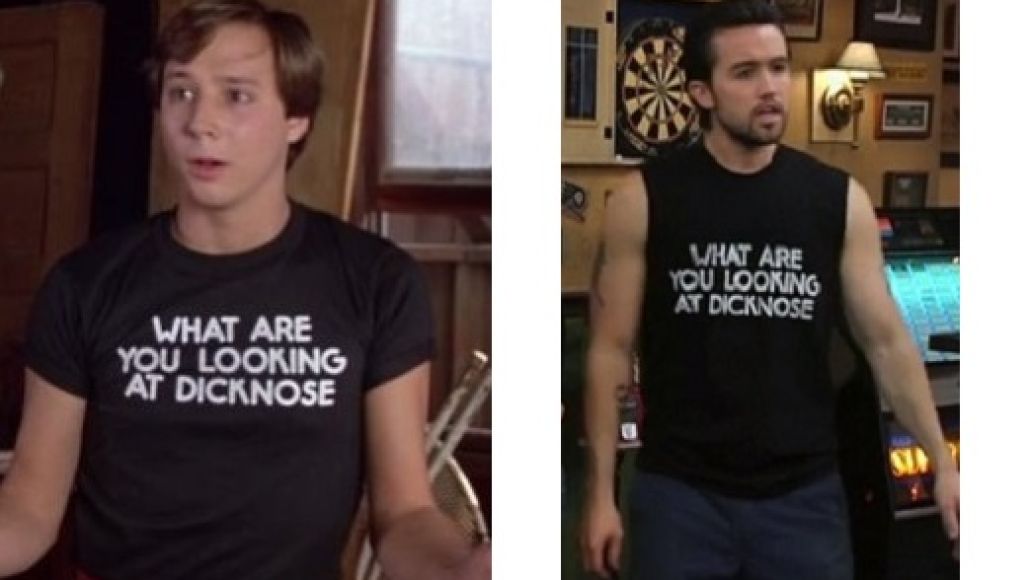 This was a fun little feature to write, but something dark has to be mentioned. There is a moment in the film that was, at best, a throwaway joke from the era, but something that hurts the character today. Just like in Bill and Ted’s Excellent Adventure, there is a word tossed out by Stiles in Teen Wolf that can only be described as homophobic. It’s an awkward reminder of how flippant the use of the word was 30 years ago, and dates the movie worse than any brand of clothing or any brand of soundtrack could provide. 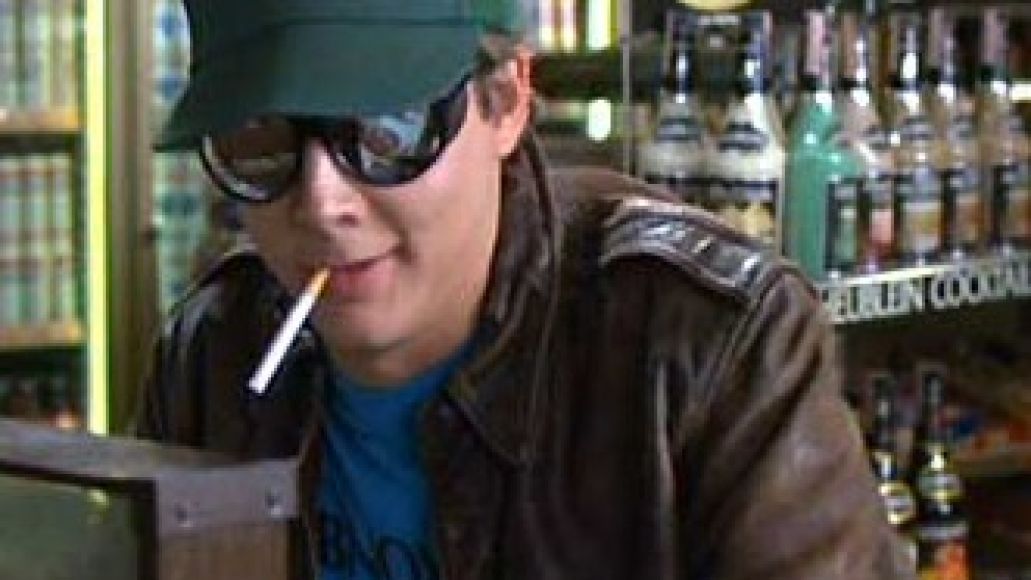 It’s a bad bit, but it doesn’t define the character. Stiles is the first to accept his friend despite being different. Despite being all about his friend and having a great time, he is disappointed in Scott when he oversteps his werewolf bounds. During the big game, Stiles hesitates but ultimately accepts his friend’s decision to play ball as a human. He’s lovable but for those brief but impactful five stupid seconds.

Well, this feature certainly took a turn. I’m sure we’ll receive feedback for “taking things too seriously,” but I digress. Stiles is hilarious. Stiles is who I wanted to be as a kid, thinking that high school was going to be 100% fun and games with easy access to beer and late-night parties. (Seriously, did anyone in ‘80s films have parents?) Surfing atop hardware vans, wearing great t-shirts, and being really confident seemed like a pretty good time to me.

As for the human beings who played Stiles in Teen Wolf, Too and the MTV series? They do not exist in this dojo. To paraphrase Highlander’s Connor MacLeod: “There can be only one Stiles.”