On paper, the Pilgrimage Music & Cultural Festival shouldn’t have worked. Founded by Better Than Ezra lead singer Kevin Griffin, the festival is located on a farm in a suburb of Nashville where the only access point is a single two-lane road, in an area that’s already over-saturated with music festivals, with a price point a little too expensive for the average festivalgoer, weird hours, and a lineup that seemed a little too broad for big music fans but a little too specific for the average person. Not all signs pointed towards disaster, but success certainly was far from a guarantee. First-year festivals are typically about learning from the mistakes you’ll inevitably make, and it usually takes a few years before a festival gets really streamlined. However, the folks behind Pilgrimage seemed to be on top of just about everything for their inaugural event, and the weekend went smoother than any first-year festival should. Sure, it wasn’t perfect. Stages sometimes ran late, and there were some minor sound problems here and there, but I came away thoroughly impressed by the whole experience. 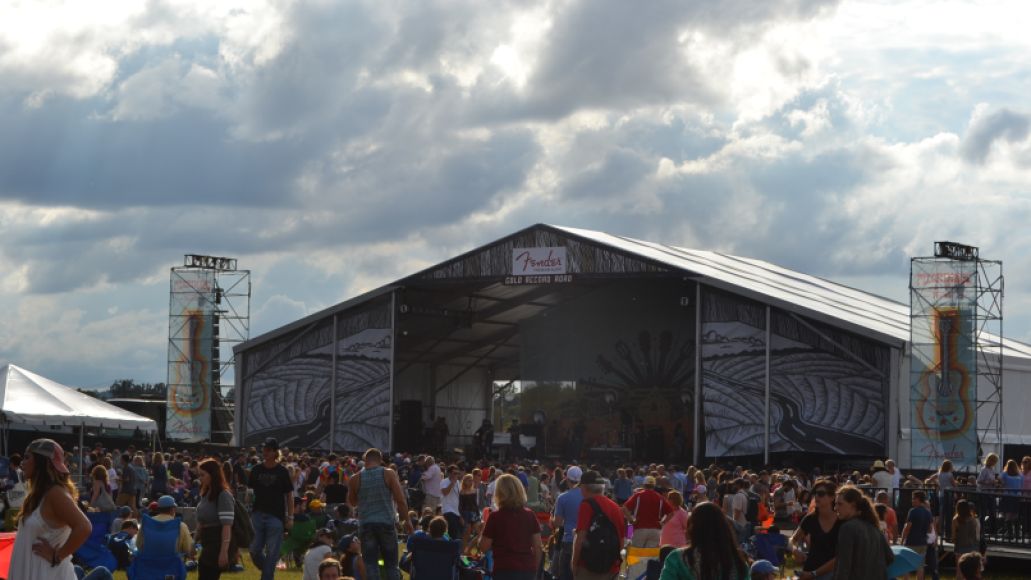 Harlinsdale Farm proved to be a fantastic setting for a festival like this. The festival grounds were full of big, green rolling hills and beautiful trees. Organizers wisely left the grounds bigger than necessary, leaving wide-open spaces that made for some much appreciated breathing room. The Hard Rock Harpeth River Stage was uniquely situated in an equestrian arena and looked like an actual venue that could hold shows year-round. The bazaar area was filled with interesting shops and good food and centrally located in the middle of the three stages. While the grounds felt expansive, it never took long to get from one set to another as the stages were close enough together to easily split sets, but angled the right ways to minimize sound bleed except in the most quiet of moments. The food truck area was perfectly situated, so you could still listen and hear the bands on the Golden Record Road Stage, and the water-filling stations were convenient and never too backed up. Porta-Johns were also nicely spaced out and plentiful and never seemed to get too nasty.

Getting in and out of the festival was also decidedly less painful than I imagined it would be. Having only one road to filter crowds in and out of the farm seemed daunting, but they somehow made it work. It felt just like normal traffic for a big event where you might have to wait up to 30 minutes to get in or out, not “Festival Traffic” as you normally think of it, where it takes hours. Everything was so well organized, I couldn’t believe I was home just half an hour after the final notes of each night. They were even prepared for the rain. On Saturday, after being cloudy all day, the rain finally came for the last couple hours of the night. Luckily, no sets had to be canceled or delayed, and the next morning every spot that was muddy in the slightest was completely covered in hay, so there was never any worry of stepping into an unexpected mud puddle. I guess that’s the benefit of having a festival on an actual farm. 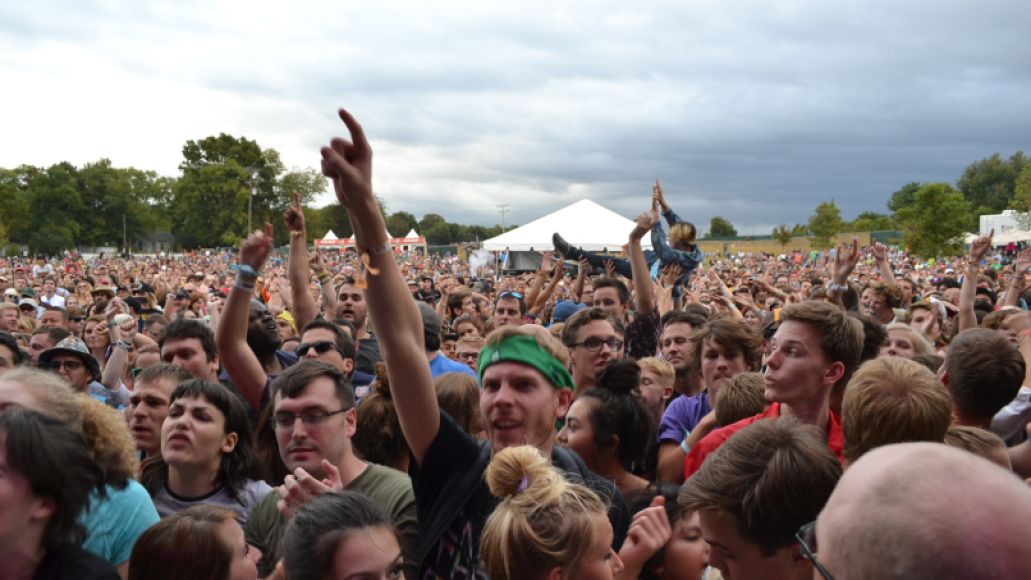 The crowd was an interesting cross-section of suburbia. Equal parts high school teenagers, mid-20s hipsters, suburban parents/grandparents, and young children – they could all find common ground with this lineup. At times, it felt almost like more of a neighborhood party than a major music festival, especially when people would set up their lawn chairs and leave them there throughout the day as their claim to prime real estate close to the stage. For those who wanted to pack the front of the crowd, it was a major annoyance, but it made sense for the more laid-back sets of the weekend. Allowing chairs is a necessity for a festival that draws a sizable older crowd, but Pilgrimage might want to look into having “chair-free zones” a la Austin City Limits for next year.

The festival organizers made a big push for having it be a friendly environment for kids as well as adults: The hours were made with kids in mind (ending before 8 p.m. each night), there was a stage specifically for kids’ music, and children 10 and under got in free. This made for even more of an interesting dichotomy. As kids played around the festival grounds, the bands on the “adult” stages made no effort to censor their acts or clean up the language in between songs (as they shouldn’t, though I can envision the letters from angry parents already), and weed was clearly in the air for certain acts (security did very little as far as checking bags at the entrance). But I never saw a kid throughout the weekend who didn’t look like they were having a blast, so they definitely did something right. While I personally would have loved to have seen longer sets that lasted further into the night, I understand their reasoning behind the curfew. 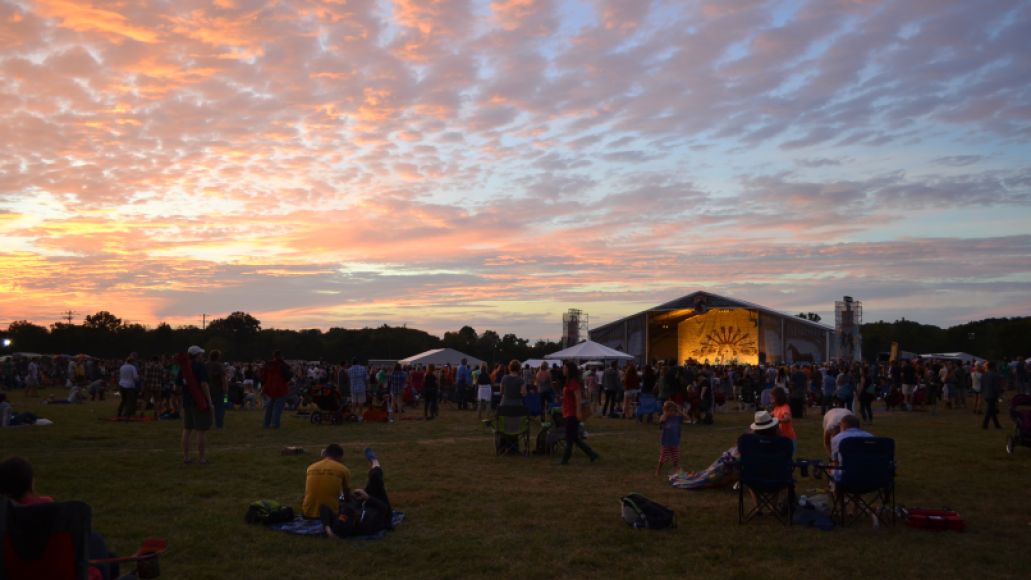 I have no knowledge of sales numbers and am a terrible estimator of large crowds of people, but I will say that while some sets had large, sprawling crowds, it did seem like the event wasn’t quite operating at capacity. That made for an enjoyable experience for those in attendance, as it was never too crowded to get near the front of the stage, and walking from one place to another was a breeze. But for the organizers, that had to sting. They had the lineup, they had the setup, but I think the price point, which seemed aimed at suburbanites with disposable income, was a bit too high to pull the size crowd envisioned. Still, the crowd was sizable enough that it seemed like a success. On a personal note, it’s surreal to see a festival like this happening just down the road from where I grew up and even better to see it be such a success right off the bat. Here’s hoping they hit whatever their magic number was and can afford to return next year, because if this inaugural edition was any indication, this could be a great festival for years to come.