Jack White has not held back his disdain for The Black Keys, and last night that tension apparently came to a head. According to Black Keys drummer Patrick Carney, White attempted to fight him while at a bar in New York City last night.

“I’ve never met Jack White until last night,” Carney explained on Twitter. “He came to a bar in NYC I go to a lot with a few friends and tried to fight me. I don’t fight and don’t get fighting but he was mad!!!”

“He is why I play music,” Carney continued. “The bully assholes who made me feel like nothing. Music was a private non competitive thing,” adding, “A 40 year old bully tried to fight the 35 year old nerd.”

Update — 9:35 a.m: White has responded to Carney’s comments. In a statement to Entertainment Weekly, he said: “Nobody tried to fight you, Patrick. Nobody touched you or ‘bullied’ you. You were asked a question you couldn’t answer so you walked away. So quit whining to the Internet and speak face to face like a human being. End of story.”

Talked to jack for an hour he's cool. All good.

“From one musician to another, you have my respect Patrick Carney.” -Jack White 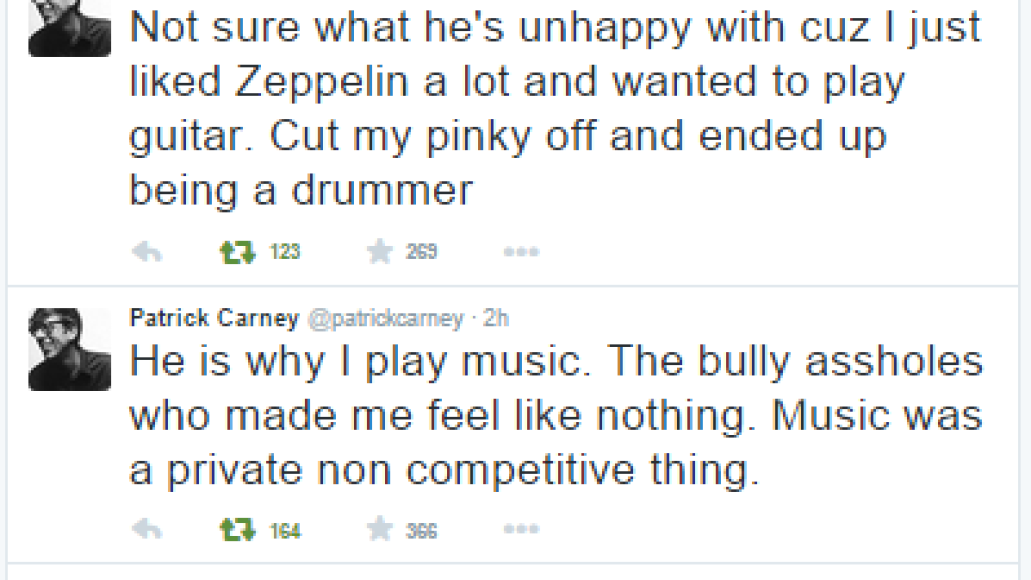 White has long accused The Black Keys ripping off his sound, and allegedly prevented the band from using his Nashville studio. In May 2014, however, White sought to clarify his thoughts, writing in an open letter, “I wish [the band] all the success that they can get.”