Late last year there was a rumor going around that Robert Plant turned down a sum to the tune of one billion dollars to reunite Led Zeppelin. While that story turned out to be fabricated by the UK gossip rags, it was powerful because people actually believed it. That’s how great the demand is for a Led Zeppelin reunion 35 years after the band’s initial demise. A billion dollars seemed like a bargain for perhaps the most sought-after reunion in rock.

Refusing to reunite Zeppelin is still an admirable stance for Plant to hold. After all, the main crux for Zeppelin’s dissolution was the death of John Bonham, one of Plant’s longtime friends whom he knew for years before they formed Led Zeppelin. So, despite a few semi-reunions including a “Page and Plant” tour and album in the ’90s and a one-off reunion show in 2008 in honor of the late owner of Atlantic Records, Plant seems set on keeping the Led Zeppelin legacy intact.

After seeing him with The Sensational Space Shifters, it’s difficult for me to understand why. Plant still has the same vitality and energy that initially catapulted Zeppelin into the upper echelon of ’70s acts. His set list still includes a good number of Led Zeppelin songs, with a few picks from his solo career peppered among them. I’ll admit there were moments when I closed my eyes and imagined Jimmy Page and John Paul Jones up on stage with him. Many grew up with the images of Page’s double-neck EDS raised high into the air before the “Stairway To Heaven” solo, JPJ’s dexterity in playing lead and bass on “Trampled Underfoot”, or Bonham’s extended solo in “Moby Dick”. It isn’t so much that The Sensational Space Shifters are unworthy — they did an incredible job of molding these songs into their own personal shapes — but that all four members of Zeppelin were iconic in their own way.

While Zeppelin’s towering triumphs will always follow Plant, that isn’t to say he hasn’t carved out his own legacy after the band. Newer songs like “Rainbow” still crackle with the same excitement that marked Plant’s earlier work, but are finely tuned to match his maturing sensibilities. 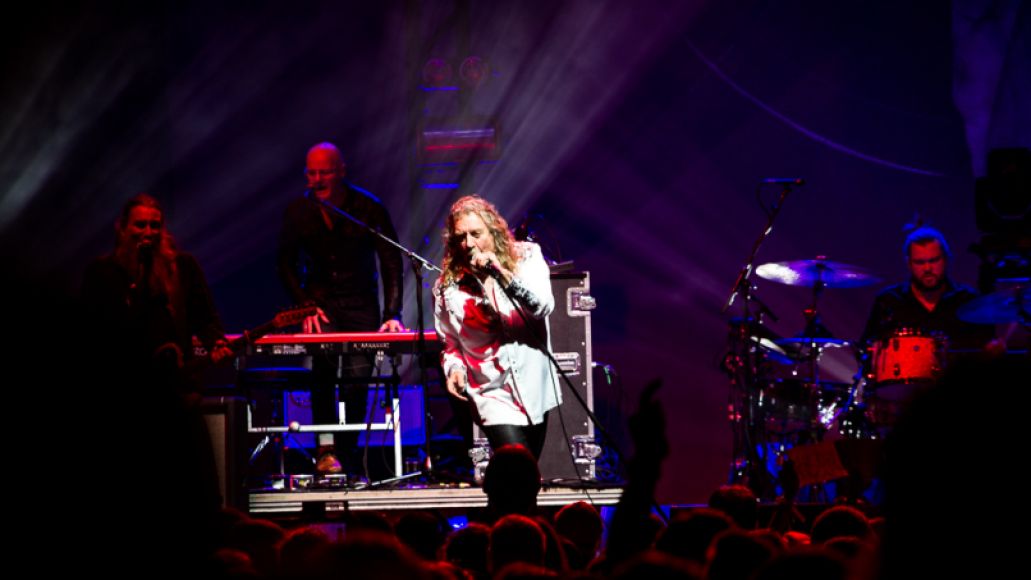 In a fit of glorious immaturity, The Sonics opened up the show with snotty garage rock. Though the average age of the performers onstage was in the late 60s/early 70s, they brought their recently reunited brand of rock screaming into a new decade with cuts from their latest album, This is the Sonics. The Sonics never experienced the mainstream success that Led Zeppelin did, but it could be argued that songs like “The Witch” and “Psycho” are just as influential as many of Zeppelin’s bigger songs, and they delivered them in a fiery and loud fashion that belied both their age and the fact that they looked like they just got out of a board meeting. It was as if they’d been practicing non-stop in their garages for the past 50 years. Gerry Roslie, now in his early 70s, can still let out a guttural scream with all the phlegm of his 20-year-old self. Very few bands can justify a reunion this late in the game, but with performances like this, The Sonics’ legacy is firmly preserved.

Plant also displayed a youthful kick. Every rock star move he mastered back in the day was still intact. More importantly, they still felt genuine, coming from a place of honesty rather than a bid to relive the past. Best of all, the voice remains the same. At the ripe age of 68, Plant still sounds like his former self. While newer songs like set opener “Poor Howard” grooved with the best of them, the highlights were always going to be when he decided to get the Led out. Underrated cuts like “The Rain Song” and “Trampled Underfoot” were delivered as perfect replicas from Zeppelin’s heyday with Plant impressively hitting every note.

We didn’t hear “Stairway”, but we still got pounding versions of “Rock and Roll”, “Whole Lotta Love”, and “Black Dog” with the former detouring into a cover of Bo Diddley’s “Mona” before settling into that iconic, groovy riff. “Black Dog” was completely reworked with a sludgier take on its famous riff and a deep drone behind every verse. It was an unexpected twist that proved that Plant was happy to respect the past on his own terms. And The Sensational Space Shifters shone in their dramatic interpretations of “Spoonful” and “Little Maggie”. These blues standards have been covered time and time again, but Plant and his band breathed new life into them through ominous synths and surprising detours into world music.

There’s still a surreal mysticism to Plant, but his stage banter revealed a sense of humor behind the persona. After introducing the band, he quipped, “Senior citizen afternoon discount at Denny’s. What more could you want?” However, the most telling and thought provoking line of the night was from newer song “Turn It Up”: “I’m stuck inside the radio/ So turn it on and let me out!

Plant is someone who was born for the stage. Every little mannerism felt right and in tune with what you would expect from him, which is perhaps why he still refuses to reform Led Zeppelin. The past is the past;. Led Zeppelin’s legacy is a monolith, but it’s one that he has come to terms with and wholeheartedly accepts. While you can tell he still holds those memories close to the heart, he’s more determined to make new ones.

Setlist:
Poor Howard
Trampled Under Foot
Turn It Up
Black Dog
Rainbow
Spoonful (Willie Dixon cover)
The Rain Song
No Place to Go / Dazed and Confused
The Lemon Song
Little Maggie (cover)
Win My Train Fare Home (If I Ever Get Lucky)
Whole Lotta Love / Mona
Encore:
Satan Your Kingdom Must Come Down / In My Time Of Dying
Rock and Roll