There’s an infinite arsenal of indie bands proudly proclaiming that they don’t live by the rules. But for Metric, this statement is more than hyperbole. It’s the driving force of their existence.

Since forming in 1998 in Toronto when vocalist Emily Haines met guitarist Jimmy Shaw, Metric has released five albums of cinematic synthpop with new wave tendencies. Their most recent wave of albums (2009’s Fantasies and 2012’s Synthetica) won Juno Awards for Best Alternative Album. The Canadian band is now set to release new LP Pagans in Vegas on September 18th, which, much like the band itself, is anything but ordinary.

Far from a premeditated declaration of intent, the name of the album is something that Emily Haines came up with at the last minute. “We’ve never named an album this late. The album had been done for a while, and I think in terms of deadlines, we were down to about 20 minutes,” said Metric’s co-founder Jimmy Shaw. “Emily was in an airport, and she said, ‘I’ve got it, I got the title,’ and she texted me ‘Pagans in Vegas’. It was a lyric from a song that got cut.”

While the name may have been thrown together on the fly, it ended up serving as an apt summation for the record. “It says somewhere in the [band] bio I think: ‘People of a conscience playing around in the arena of unconscionable behavior.’ And I think that’s a lot of what we were trying to do on the record. We were trying to step outside of whatever we felt was comfortable for us and within our necessary moral confines and fuck around for the most part. Just have fun in Vegas. Because that’s what you do. You put your morals aside and you hit the tables.”

I asked Shaw if he had any crazy Vegas stories to share. “First of all, you can never ask someone if they have crazy stories about Vegas because they obviously can’t tell you,” he replied. “It’s a crazy place. When you get there, you’re like, ‘Oh yeah.’ And then 24 hours later, you’re like, ‘Oh no. You gotta get me out of here somehow.’ It’s a dangerous joint, man. It pushes the limits of what you can handle, what you can stand. If you thought you [had a] tough stomach, give it 48 hours in Vegas and see how well you’re feeling.”

Rather than indulging in the high-concept themes of Metric’s recent albums, Pagans leans more towards having fun and living in the moment. “Fantasies and Synthetica were very much a declaration of who we were at the time. It was very much a declaration of personality and a statement of belief. This time around, it felt like the thing to do was not to do the same thing. The thing to do was venture into a territory that was slightly unexplored for us: Be brave and not just repeat ourselves.” 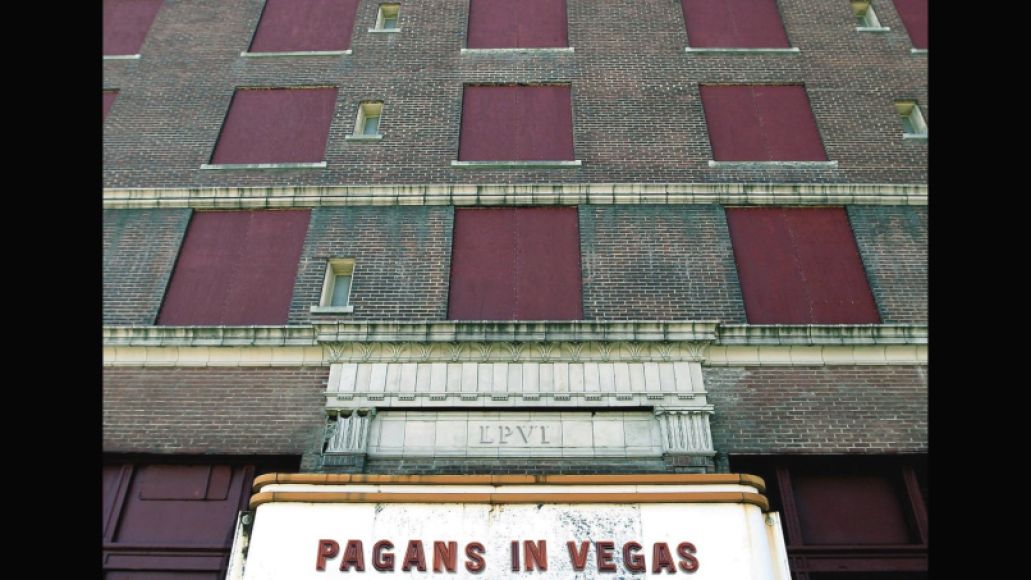 In fact, Pagans is part one of two “very different” albums, the second of which (still untitled, with the working title LP7) is a few days from completion and planned for release next year. According to Shaw, who has produced or co-produced all of Metric’s albums, some songs on Pagans have no drums, bass, or guitar, while some songs on the new album feature no electronics or synths. This is sometimes how the band makes music; usually, they end up bringing the two sides together. This time, they didn’t do that. “People may be a little perplexed when they hear Pagans,” warned Shaw.

Metric is looking forward to playing the well-timed Life Is Beautiful festival in Las Vegas a week after the release of Pagans in Vegas. Having played everything from Coachella and Pemberton to Reading and Leeds, the members of Metric are no strangers to the festival experience.

“They’ve definitely gotten a little more ‘lifestyle’ over the last five years,” Shaw said of festivals. “When I first started going to Coachella, before we started playing there in the early 2000s, it was kind of like you went to see this band, this band, and this band. Now you just kind of go; it doesn’t really matter who’s playing. It’s almost like Goldenvoice is the headliner of Coachella. But it’s awesome. One of my favorites to play is Osheaga in Montreal.”

Shaw remembers the days when he and Haines were struggling to eke out an existence while sharing a Williamsburg loft with future members of Yeah Yeah Yeahs, Liars, and TV on the Radio, long before they started playing massive festival stages.

“It sounds better than it was. It was actually pretty shit,” recalled Shaw. “It was on top of a trucking company. My room would fill up with carbon monoxide at six o’clock in the morning as the trucks got ready for their day. It was pretty hardcore. No one had five bucks. In the history books, those things look awesome because rock ‘n’ roll is supposed to be filled with a certain level of blood and sweat and piss and puke. And there was definitely all of those elements at 249 Metropolitan, for sure. When I look back and remember it, I don’t necessary look at it as this highly romantic time. I remember it as pretty brutal and a serious struggle. It’s fascinating that it happened in retrospect. It’s a good story. Would I go back there? Not in a million fuckin’ years.”

Shaw looks back on this not only as a formative experience for the band, but also as another part of the “weird life” that is being a musician. “You live on a bus and your MO every single morning is to find a place to take a shower. And find a place to get water, because there’s none left on the bus. And find a place to get a coffee. And that whole thing is different eight hours later,” he said. “It’s just weird. I think weird is a really good word for it. It’s just a strange way of living. A lot of those 23 hours you’re not playing are kind of shitty, but that hour you do play it’s the best. It’s stronger than any drug I ever tried. You end up killing for it because it’s such a powerful moment that you’re always trying to chase.”

Shaw added that it doesn’t matter whether you’re in the studio or on stage — as a musician, one of your driving purposes in life is trying to capture those moments. “They’re like these little invisible butterflies that fly around the room and you’re trying to catch one in the dark,” he said. “And you just have to keep waving the goddamn net and one day someone turns on the light and you’ve got six of them, and you’re like, ‘Holy shit. This is amazing.’ A lot of it’s shooting in the dark and you just gotta believe.”

After 17 years in the music business, Shaw has seen firsthand how increasingly difficult capitalizing on those moments has become for indie bands. “There’s no middle class in music anymore,” Shaw said. “Ten years ago there was a lot. There was a huge middle class that started in 2001 with Jack White and Julian Casablancas forcing their way into this center that had previously been Counting Crows and the Backstreet Boys. And they made this space for all of us, which was awesome. Now, 15 years later, that space has gotten so fucking small. There’s no money in the music industry. It’s like 70 percent less than it was in 1999. So that remaining 30 percent that is still there is so coveted. The people in charge, the people that have money and power in this industry — and there’s only four of them — they’re taking those spots. You’re not getting them unless you’re in with those people. So you have to play this insane game.”

But instead of playing the major label game, Metric chooses instead to record music in their own studio (Toronto’s Giant Studios, which Shaw previously co-owned with Death from Above 1979’s Sebastien Grainger) and release music on their own label, Metric Music International (which the band calls MMI). Shaw did admit that this independent ethos, while a crucial element for the band, has its pluses and minuses.

“We’re a fiercely independent band. There’s not a lot of incentive for making us bigger than we are,” Shaw said. “It’s difficult because without that label, no one wins if we win except us. It we have a song that was a rocket, we don’t have any rocket fuel. We can’t afford to drive a song into the top 10.” 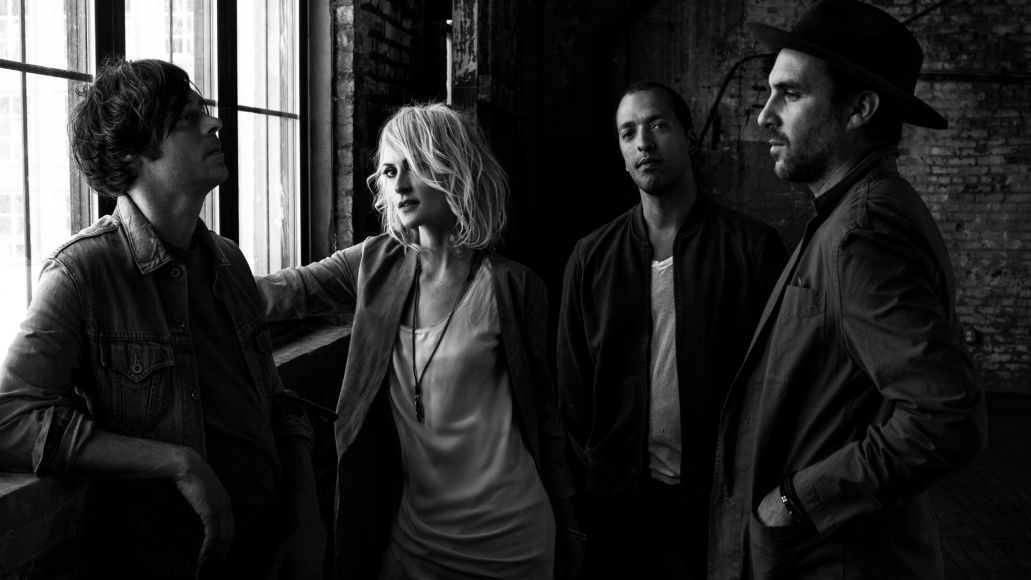 On the plus side, the band has “incredible freedom” to do “whatever the fuck we want”, like creating “The Pagan Portal” app where the band releases music directly to fans through the app before it’s available anywhere else. “If we had a label, we couldn’t do that,” said Shaw.

This freedom also enables the band to conduct more out-there experiments, like the recent creation of a 1-800 number for the band, an idea that Haines had after an 800 number was included in a recent ‘80s infomercial-style video shoot for “The Shade”. What happens if you call? Shaw didn’t give out too many details, but he did state that “if you smoke weed, I highly suggest you smoke before calling.”

Despite the band’s success, there have been times when they’ve thought about calling it quits. One of those times was in 2005 while they were on tour in the south of France. “I’ve never seen a moment when we were more dead than that,” said Shaw. Yet on the very last night of the tour, they got invited to a guy’s house and found themselves on a houseboat when they got a call saying they’d be opening for the Rolling Stones. According to Shaw, the band thought at the time: “Maybe we’re not all gonna commit suicide tonight.”

Did the Queen dig the band? “It’s hard to tell,” Shaw said. “She’s a good politician.”