Despite never living more than a six-hour drive from the border, I’d never been to Canada before. Despite being a music journalist for almost six years, I’d never been to an international music festival before. So when the opportunity came for me to fly north to check out POP Montréal, I jumped.

Perhaps a little too fast, actually. When it came time to book my ticket, about four months out from the actual fly date, I realized my passport had expired a year ago. Whoops. Thanks to a downloaded passport photo app and the expense of an expedited fee, this little oversight was handled. But what never really got done was the research.

You see, I had a real vacation scheduled for just a week prior to this trip. On top of that, there were weddings and my daily grind, and well, I never really found the time to do proper research. Oh sure, I had stuffed my Spotify with a whole bunch of albums from intriguing bands on the massive festival bill, but one thing happened after another, and I barely even scratched the surface of what to expect. 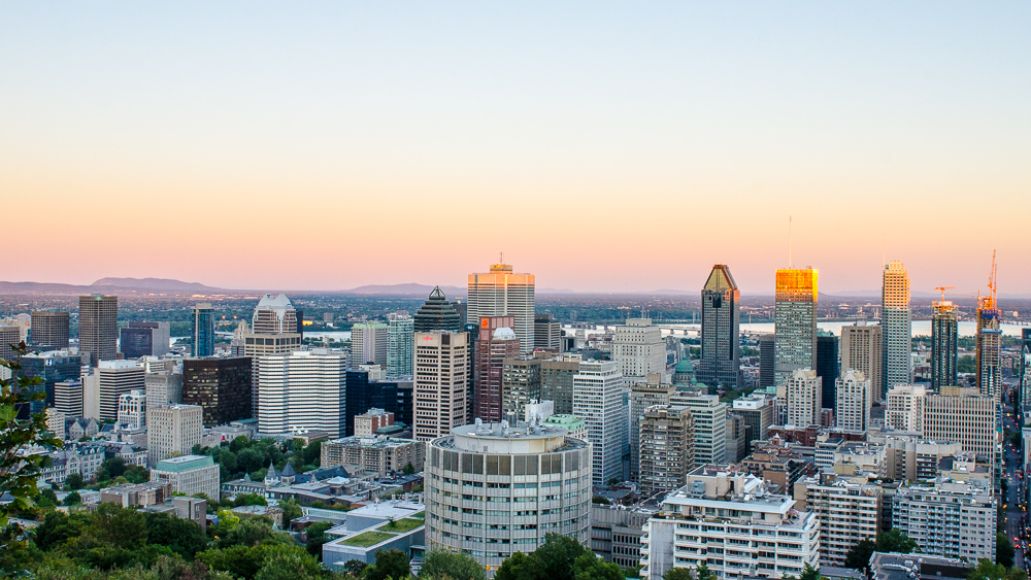 On top of that, I knew nothing about the city. I’m usually a madman when it comes to scouting information about a new place, especially one in a foreign country. This time, I didn’t even take the time to learn the basics of manners, communication, or transportation. Like a rookie chump, I was going in completely blind. I didn’t know what I was getting into with the city, let alone the festival.

So I did the only thing I could and tried to embrace it. What follows is a detailed account of my first-ever experience in Canada, in Montréal, at a city-wide music festival. I went in knowing no one and nothing. This is what I learned. 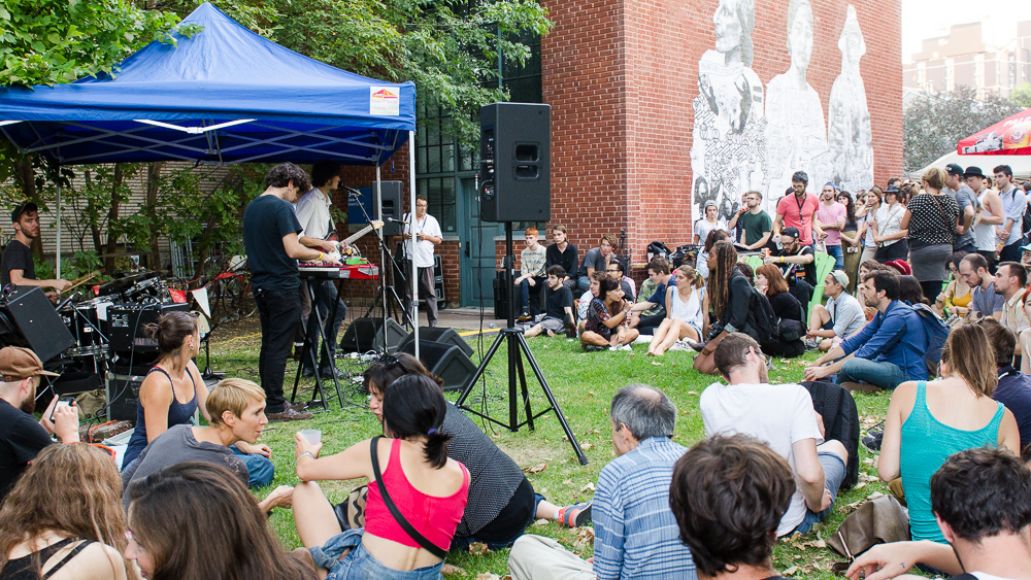 11:30 a.m. — Before I even reach the airport, I’m wondering why I ever requested such an early flight. Landing at 11:30 sounded great when I considered getting a feel for Montréal before the festival really kicked into gear, but I can’t even check into my hotel until 3:00. Getting through the empty customs check is a breeze, though, and this is the unintentional genius of my timing. Turns out the folks coming into town later in the afternoon get logjammed for two hours just leaving the airport. Suckers.

I meet my driver, Sarah, outside the terminal. She tells me how she left a higher management position at MUTEK to become a lowly driver at POP, but says she enjoys having her feet on the ground, meeting people from all over, and experiencing things rather than running them. As we drive into downtown, she begins pointing out streets, directions, and points of interests. I’m told I’ll see plenty of construction-site orange, as summers always find Montréal in a state of repair. Sarah thinks it’s because Québécois aren’t the type of people who will fix something until it completely breaks down. I wonder in what state I’ll find POP Montréal.

12:52 p.m. — I’ve left my bags at the hotel and headed to lunch. By now, I’ve already “lost” my passport twice and made an ass of myself with this whole French thing at least a half dozen times. I’m sitting in a Frites Alors! restaurant on Boul St-Laurent. In front of me is my first-ever poutine and an iced coffee I thought was coming with cream but instead is mounded with whipped cream, chocolate sauce, and cherries. I’ll figure this French accent out yet.

Next up is check-in at POP HQ. The headquarters are housed in an old stone building that could either be a library made of tiny rooms or a boarding school with dark secrets. The setting only amplifies the uneasy thrill I’m experiencing. I feel like the new kid in town on the first day of classes — that exciting, nervous tension of being in a city, a country you’ve never been to before, alone, doing something you’ve never done before. Sure, I’ve attended city fests like this, but never in a city or a country where I’m such a stranger. I’m lost, but oddly content in the mystery of it all. 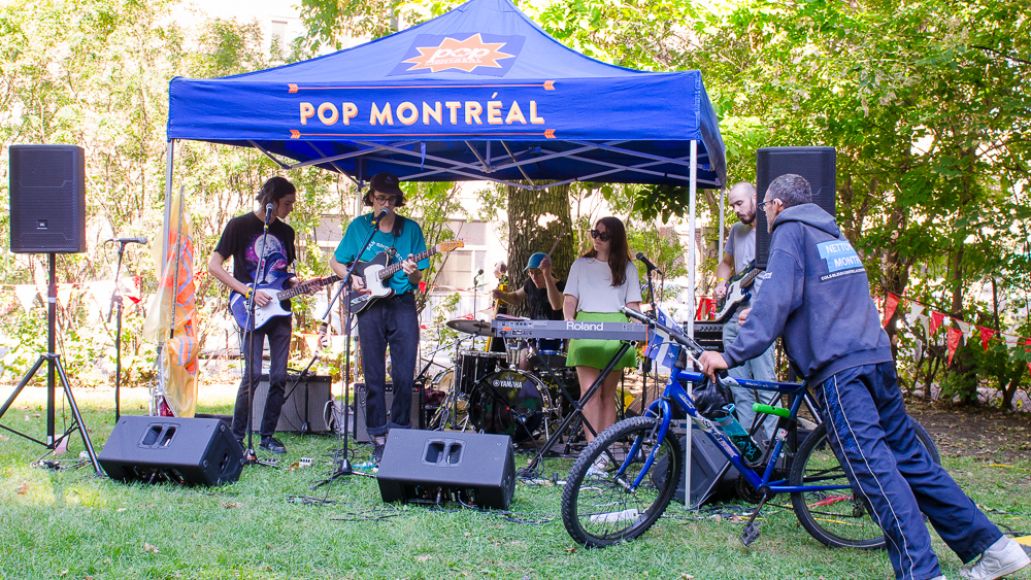 2:25 p.m. — On the way back to check into my hotel, I technically see my first band. There’s a welcome BBQ happening in the small grassy space outside HQ, and a strange beat is pulsing from within. I walk over to find Nick Persons hunched over a synth, dressed in a brightly colored Hawaiian shirt and yelling (as best I can tell) “I believe!” over and over into a microphone modulated to the point of sounding robotic. Off to the side, two girls in high-waist shorts and belly shirts dance (read: swing their arms wildly) to the drummer’s syncopated beats, clearly dying in the heat of the sun. The set ends before I can ready my camera. Canadians are weird.

I stick around for the first few songs from LOC-NAR, a slackercore outfit with stoned spasms of noise and nice, breezy grooves. A man with a bicycle pulls up directly in front of the keyboardist, soaking in the sounds from as close as possible until a guard asks him to move. He locks up his bike, pulls up a chair right back where he started, and lights a cigarette. Off to the side, a Mick Jagger-looking gentleman with a yarmulke is tweeking out before abruptly turning to leave mid-dance move. Canadians are weird.

6:20 p.m. — Once I’m settled at the hotel, I walk back to the POP BBQ to check out who the next surprise guest artist is. I’d heard Fanfaraï’s African jam jazz from my room’s balcony and am bummed that I arrive just as they are packing it in, but am pleased to see Ought start to set up. The local outfit has a British cadence to their sarcastic post-punk, a vibe that is engrossing on record but may miss the mark in an open show like this. “We’re not really an outside band,” frontman Tim Darcy admits. Though he runs and bops in place with the utmost energy, the crowd is all chatter and lounging, and the music sadly doesn’t get to shine. It couldn’t have been easy to follow Fanfarï’s vibe, either, but I may check Ought out again at their official show later in the week. 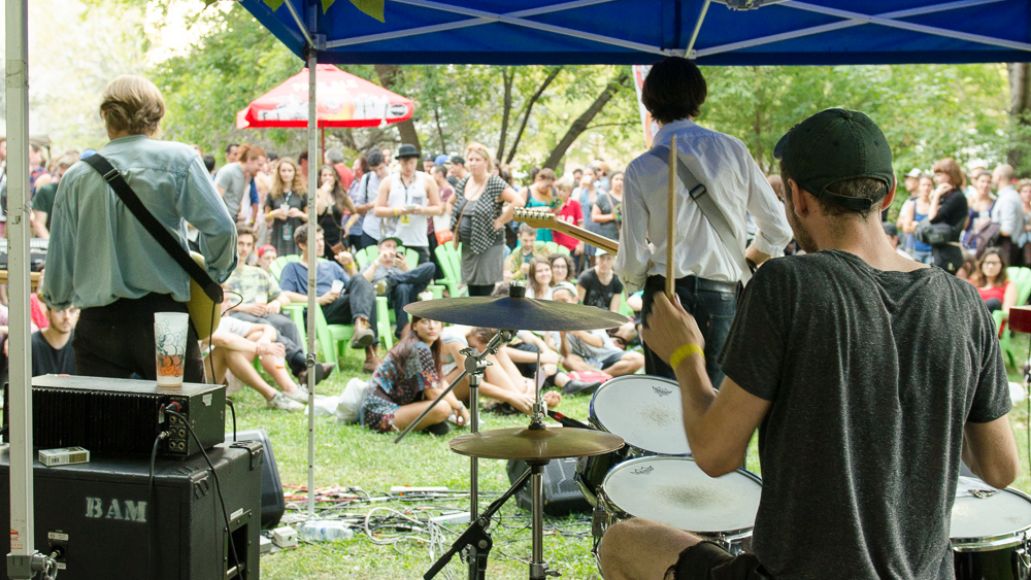 7:40 p.m. — After nearly walking nose-first into Win Butler’s shoulder inside POP HQ, I’m waiting in line for a bus to take me three kilometers northwest to my next venue. Yes, I said “in line”; people here actually form and respect a line for public transportation, and the bench at the stop counts. Compared to the hordes pushing through New York City transit, it’s one of the first signs of the relative pleasantness for which Canada’s famous.

I’ve messed up my understanding of time and arrived an hour before the set I want to catch at Théâtre Fairmount, so I stop by the Fédération Ukrainienne to see whoever’s playing. The venue is an old-style meeting hall, with ancient, wooden folding seats lining the floor and a large semi-circle balcony. Molly Sweeney is on stage delivering some sort of psych-blues-folk. “I used to be a folk singer,” she says, “but then I got a rock band.” It’s really still a folk band, though, and not a great one. Her voice is average, and frankly unpleasant on the screams. But she does show talent, switching between autoharp, tiple, and electric guitar on every song. The sound is interesting if nothing else, but I wonder how much of it gets chewed up in the venue. Ought is scheduled here for their next gig, and I’m a little less inclined to make it out again after hearing this.

9:00 p.m. — Your surf punk band wishes it was Les Breastfeeders. I’m at the newly, spectacularly renovated Fairmount checking out the ridiculously named opening act, and they are absolutely destroying. The entire crowd is shimmying hard to three guitarists, two excellent lead singers, and a poor man’s Alice Cooper smashing a tambourine, jumping between the stage extensions, spitting liquid into the air, and wearing a top hat. I don’t have the slightest idea what they’re singing as it’s entirely in French, but it sounds like “party” to me. The last time I had an awakening like this for a band I couldn’t understand was when I caught Stromae at SXSW. I now want more of Les Breastfeeders every day of my life. 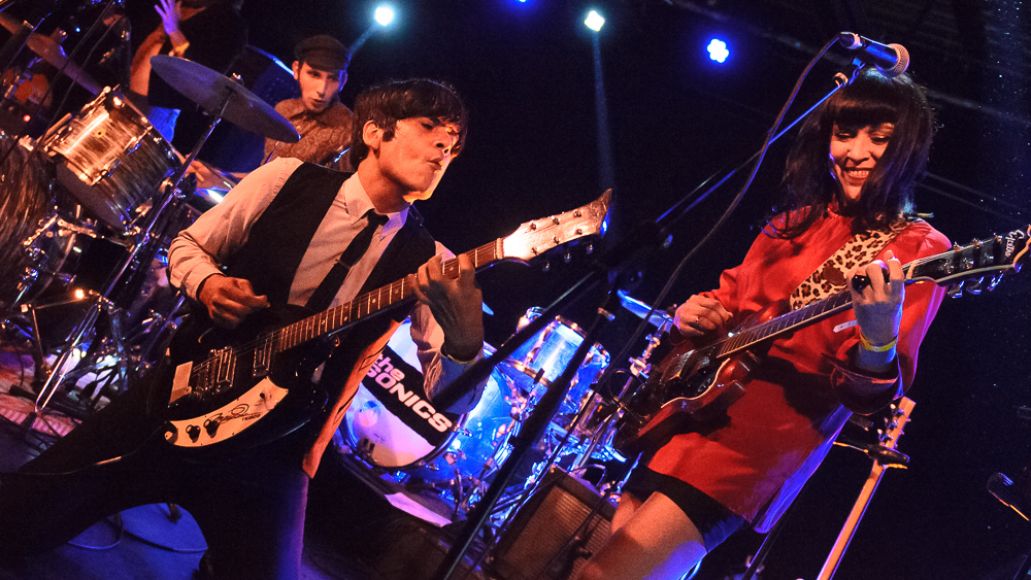 10:15 p.m. — Your grandpa’s garage rock band wishes it was The Sonics. Even with Gerry Roslie’s hands shaking and his glasses strapped to his head, the guy still has the best “old guy” voice I’ve ever heard. Same goes for saxophonist Rob Lind, who rocks his grandpa gut harder than anyone. Bassist Freddie Dennis, while not an original member, brings a whole bunch of charm and an impeccable yowl to the group. Dusty Watson, known for bashing the drums on Lita Ford’s solo debut and as a member of The Queers, demolishes his kit, easily passing for a 30-year-old rock star. Together, these guys could shame half the garage rock acts on Hype Machine.

The crowd wholeheartedly loves every second of it. Everyone is singing along and dancing, hard — not thrashing about uncontrollably, but genuinely enjoying the music. The packed venue offers a glimpse at how different a Montréal crowd is from the Boston or NYC audiences in which I’ve historically found myself. As a whole, they’re not so cautious of showing their joy by moving their body, goofily or ecstatically, but at the same time are considerate of their fellow concertgoers. One guy gets kicked out around the fifth song, but for the most part there’s a respect shown here I sadly see far too infrequently in the States.

As packed as the place is, I’m easily allowed to move up front during the first three songs as I snap pictures and get thanked — sincerely, warmly thanked — when I move my six-foot-three frame back into the crowd. The last show I shot in NYC was Father John Misty at Central Park’s Summerstage, a venue with a huge photo pit I occupied with maybe seven other photographers. When we left after the first three songs, a girl in the front row sneered, “Good, leave. Get out of here,” as if we had ruined her whole night. These Montréalais don’t begrudge me my job, nor do they scoff at anyone trying to move through the crowd in any direction (and no one dares attempt the dickish push to the front we’ve all been guilty of). Even when I accidently bump a man in the shoulder as I try to take an overhead shot from the back of the room, he apologizes to me and offers to move out of the way. Dude, what? 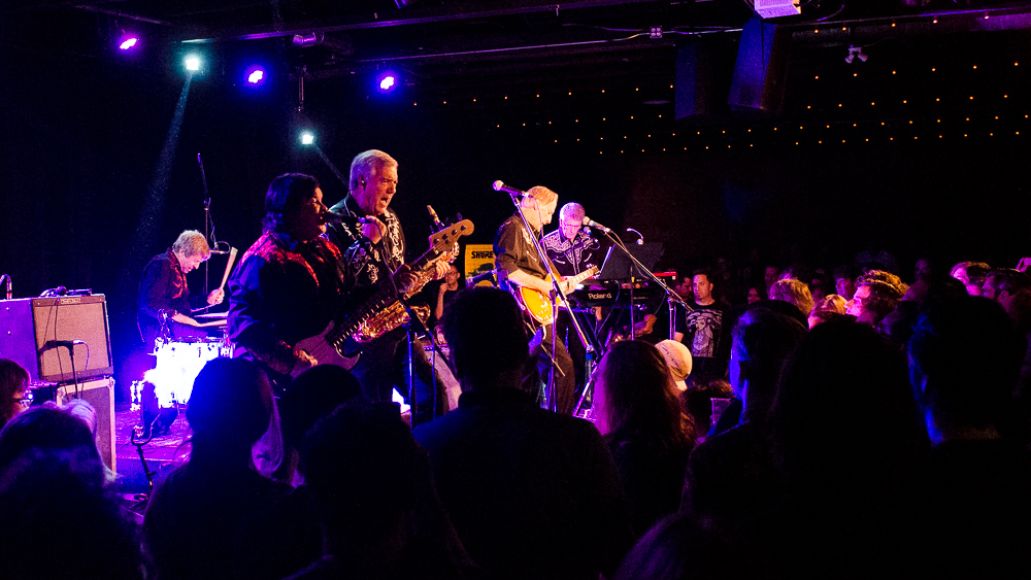 The Sonics put on an A+ show, and the crowd is welcoming in a way that’s sadly rare in my experience. Even Win Butler is able to stand in the back, mostly by himself, unaccosted and enjoying the show. I may be by myself in this place, but suddenly I’m not feeling quite so alone.