With the much anticipated first episode of ABC’s The Muppets. having aired last night, Consequence of Sound’s resident Muppetheads, Matt “Moi” Melis and Dan “It’s Not Easy Bein'” Caffrey, discuss whether or not the Muppets are back right where they belong.

Matt Melis (MM): Here’s a Muppet news flash: Kermit and Piggy are broken up, Fozzie is dating Riki Lindhome from Garfunkel and Oates, and the Muppets are back on prime time. Boy, a lot has changed since that last European jewel heist. Much has been made about the old gang getting an Office-style overhaul from their old variety show days at the Muppet Theater. Even more foam and felt eyebrows have been raised at the notion of trying to make the Muppets appeal more to adults (haven’t they always?). But after months of speculation — and a hilarious first-look teaser — it finally came time to play the music and light the lights. Dan, do you think the frog, pig, bear, and “whatever” are back right where they belong on network prime time, or is it time to hop back to the swamp?

Dan Caffrey (DC): The Muppets have certainly thrived in a prime time network slot before. There’s The Muppet Show, obviously, and hell, I’ll always be an apologist for the flawed but still interesting Jim Henson Hour and Muppets Tonight. But the mockumentary format here is so different from anything we’ve seen from Green Stuff and the gang before that I’m hesitant to call it a return to form. Granted, every Muppets television show has been drastically different, but the behind-the-scenes, fly-on-the-wall thing (keep your tongue in your mouth, Kermit!) makes for a significant departure in tone. Artistic success/failure aside (we’ll get to that in a bit), the concept alone is a risk, and I think The Henson Company should be commended for taking it, rather than just rehashing the variety-show angle. But it’s also a double-edged sword. How do you give the old-school fans what they want while still cooking up something fresh?

Anyway, I’m getting ahead of myself. Do you think the new format was a smart move from the creators? Or, perhaps more interestingly, what was your general, at-a-first-glance assessment?

MM: I think my feelings about last night’s episode can best be summed up by an old exchange once shared between our two favorite geriatric hecklers.

Waldorf: “And that was nothing like a good show.”

I always saw myself as a Kermit type or, on my more peculiar days, maybe a Gonzo. I never thought I’d identify with Statler and Waldorf, though. The only thing that kept me from throwing one of Lew Zealand’s boomerang fish at the television — apart from the fact that I would likely end up with a mouthful of mackerel — was the hope that with each new scene perhaps the episode would begin to deliver on the promise of that first-look teaser. But that never happened. Instead, we got a version of the Muppets that sacrificed much of the franchise’s charm and whimsy in an attempt to be more modern and edgy. A poor trade-off.

But I want to try to stay positive. So, what did you think worked well on last night’s episode, Dan?

DC: Because it relies more on slow burns and honest exchanges, the mockumentary format made for some of the most emotionally affecting Muppet moments I’ve seen in years. The one I keep coming back to is the flashback of Kermit’s breakup with Piggy. If you look at their squabbles and separations in previous Muppet iterations, they’re often characterized by manic arguments that always end in a karate chop to the frog’s head. I’ll never get tired of seeing such manic, physical comedy from the world’s greatest cross-species romance, but it was also refreshing to see the end of their relationship handled with such solemnity: Kermit ends things in front of a movie theater, the camera (handheld, it’s worth noting, to contribute to the romantic unease) holds on Piggy, and through some subtle facial (or snout-al) expressions, we see her going through genuine pain. I can’t picture that happening in any of the aforementioned Muppet series or films. So I’d say the series’ greatest strength for me so far is its considerable emotional core, a core we wouldn’t be able to get in a different format. What about you? 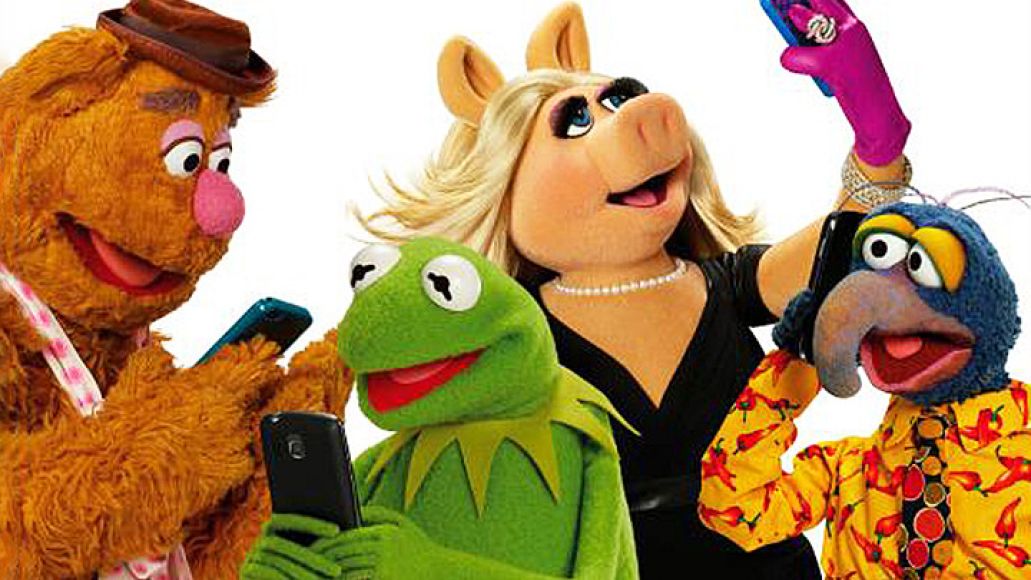 MM: My favorite parts of last night’s episode were twists on what we’ve come to expect from two of our favorite Muppets, Piggy and Fozzie. I loved that the show the Muppets are now working on is a late-night talk show hosted by Piggy (Up Late with Miss Piggy). After years of nobody outside of her fellow Muppets, and maybe Chuck Grodin, viewing her as a sensation, the diva wannabee finally has a platform — and a huge desk — to show she has the “chops” for stardom. Give “moi” an inch (and a studio audience), and watch her take a mile (in pumps no less), probably trampling on her dear friends “Gary” (Gonzo), “the tooth guy” (Dr. Teeth), and “the one over there” (Zoot) in the process.

I’ve heard multiple people comment on the risque nature of Fozzie dating outside his species. (What do they think the frog and pig were doing all these years?) But I was shocked to see Fozzie with a female, period. And I feel so happy for our always lovable but perpetually hopeless bear comic. In last night’s episode, Fozzie finally got to grow up. He left the antique jokes and whoopee cushions at the office and went home to the same relationship problems that the rest of us deal with, like meeting the parents. Paws down the funniest scene of the night showed Fozzie driving to his girl’s parents’ home in his red convertible (not a Studebaker) and explaining to the camera: “When your online dating profile says ‘passionate bear looking for love,’ you get a lot of wrong responses … Not wrong but just wrong for me.” Wocka, wocka, wocka, indeed.

So, what didn’t work for you, Dan?

DC: I never thought I’d say this about a high-profile Muppet series, but most of the jokes just didn’t land. It’s the other side of the mockumentary coin. Where the medium made for a rock-solid emotional foundation (in addition to the end of Kermit and Piggy, I, too, loved feeling a little sorry for Fozzie dealing with the real world), it makes for a stalled sense of humor that just doesn’t jive with the Muppets. For example, in the writers room, Pepe the Prawn and Rizzo the Rat pitch a sketch called “Dancing with the Czars”, as a riff on the appearance of then-guest Tom Bergeron (he gets replaced later by Elizabeth Banks). Seeing the tiniest cast members dressed as Russian monarchs was amusing indeed, and I couldn’t wait to see them launch into the kind of absurd, wonderfully bad pop-culture parody the Muppets do best. But Kermit shoots down their idea before they can even act it out. The whole thing felt a little cold. The same goes for the awkward silences between Fozzie and the ursine-phobic family of his new girlfriend. While awkward silences are a very real thing, they don’t feel real in the world of the Muppets. What about you, Matt? How did you feel about the humor?

MM: I’m fine with the behind-the-scenes documentary style and premise — they didn’t make a crutch of it — but what was the deal with the pacing of those rapid-fire jokes, especially early in the episode? They were like the Swedish Chef flinging a volley of meatballs against the wall in the hope that a few would stick, but rarely did they earn yucks. It’s not like the creators don’t understand the Muppet style of comedy. Look at the teaser. It’s a perfect example of Muppet humor: incredibly meta, delightfully twisted, and reliant on character to lead to laughs. For example, take the teaser scene that begins with Piggy, likely in a bit role, deciding after three weeks of shooting a movie that her character from Atlanta is now French and ends with her making out with Topher Grace and prodding Kermit with the tidbit that TMZ has already dubbed them “Tophiggy.” Nothing in last night’s episode showed anything near that level of understanding of how just staying true to these characters — developed over decades — will naturally lead to rich, comedic situations.

Here’s the million-dollar question, then. What should we hope for over the next 13 episodes?

DC: If we get more of what we saw tonight, that’s not necessarily a bad thing for me. I want to reiterate that part of my tepidity with the show stems from the unfamiliarity. I’m just not used to seeing the Muppets handled in such a grounded, somewhat stilted manner. It’s somewhat of a shock for me. If these were humans we were watching, it wouldn’t be an issue at all. I find myself wondering, “Are these new Muppets the problem, or am I the problem?” I feel like somewhat of a hypocrite commending the show runners for taking a different direction, then balking at this new path for not being in line with what I know and love about my favorite characters.

So with all these conflicting emotions, I choose to accept that this slow yet emotionally hefty take on Henson’s creations is here to say. If anything, I’m hoping that the initial shock wears off, and I’m able to better accept that this is a completely new An-nee-mall. An-nee-mall! What are your final thoughts? Where do you want to see it headed?

MM: One episode does not a season or series make, and I can’t wait to see where certain story lines go, particularly the Fozzie one. However, if all 14 episodes intend on writing for the format rather than the characters, then I’m going to make like Fozzie in The Muppets Take Manhattan and hibernate for the rest of the season. Know anybody looking to lease a cave?

The Muppets: Back Right Where They Belong?