Goodfellas turns 30 this weekend, and when looking back, it’s easy to forget how goddamn ruthless it is. That’s because Martin Scorsese’s epic thesis on how organized crime is emblematic of the American Dream has been the subject of countless pop-culture homages, many of which make light of the film’s almost clinical depiction of gang violence. Yeah, that’s right — clinical. Moralists be damned; the brutal murders enacted by Robert DeNiro’s Jimmy “The Gent” Conway and Joe Pesci’s Tommy DeVito (Ray Liotta’s protagonist Henry Hill is usually an onlooker) aren’t glamorous, but treated rather coldly. Other than whatever’s playing on the jukebox, there’s rarely ever any incidental music that tells you how you’re supposed to feel.

10 Goodfellas Quotes You Probably Say All the Time

So, when picking our top 10 tributes to the film, we made sure to include some darkness (The Sopranos, Casino, Compton’s Most Wanted), as well as some lighter fare, just to remind viewers that no matter how many times you’ve seen it, Goodfellas has a heart of shadow, even if it still pumps very real, very human blood.

Gangster films have been a huge influence on hip-hop for quite some time now, but West Coast rap pioneers Compton’s Most Wanted were one of the first groups to pay tribute to the genre. On “Def Wish II”, released a mere two two years after Goodfellas, they sampled Henry Hill’s matter-of-fact musings on murder (in addition to some choice quotes from Scarface) several times in the song: “For most of the guys, killing’s got to be accepted,” “Shooting people was a normal thing. No big deal.” etc. Oddly enough, the video version swapped out the Goodfellas dialogue for lines from the solid, yet much less effective crime thriller Deep Cover. Turns out the world of sampling rights is just as ruthless as organized crime. —Dan Caffrey

Believe it or not, most of the gangsters portrayed in Goodfellas were worse people in real life — Paul Vario (Paul Cicero in the film) had a violent temper that contrasted with Paul Sorvino’s warm onscreen counterpart, and Tommy DeSimone (Tommy DeVito in the film) allegedly tried to rape Hill’s wife, Karen, whom, at one point was said to be having an affair with Vario. Even Hill himself came off as much scummier in reality than when played with the wonderful deer-in-headlights anxiety of Ray Liotta. Anyone looking to delve further into the nitty-gritty deceit of Hill should check out ESPN’s 30 for 30 documentary, “Playing for the Mob”. As narrated by Liotta, it lays out the schematics of Hill’s 1978–79 point-shaving scandal involving the Boston College basketball team. After watching, it’s just as hard to shake off Hill’s manipulation and the desperation of some of the players as it is to forget about Goodfellas’ grueling violence. —Dan Caffrey 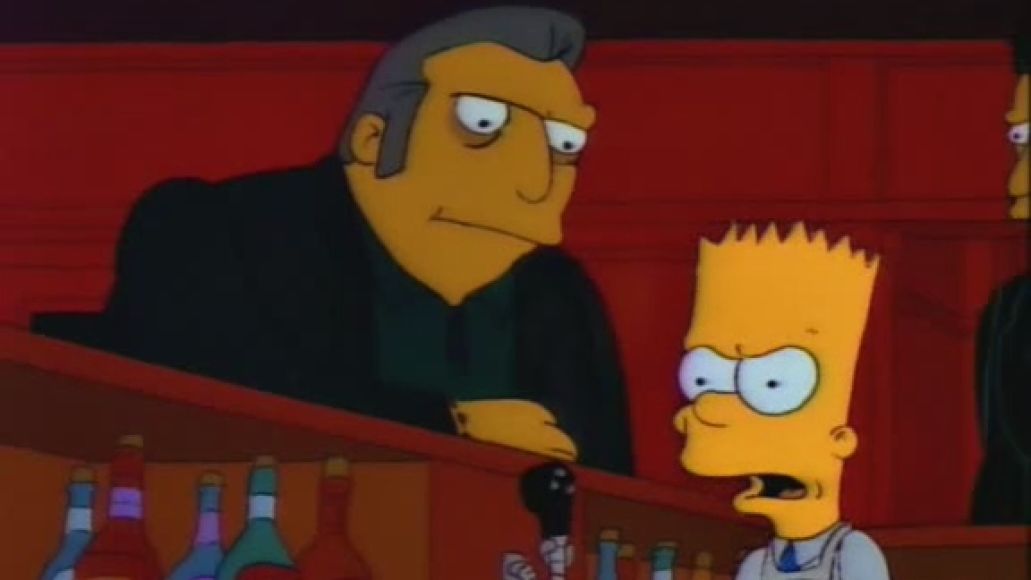 Season three Simpsons episode “Bart the Murderer” has a similar plot to the formative of years of Henry Hill: a troubled kid stumbles across a group of local gangsters, only to join their ranks as an errand boy. It’s kind of like logging mandatory volunteer hours for school, only instead of reading to old people at a nursing home, Bart devotes his afternoon time to — as Springfield mafioso Fat Tony puts it — making “an excellent Manhattan.”

Longtime Simpsons writer John Swartzwelder actually penned the episode before Goodfellas was released, but added in some familiar plot details, such as Bart strutting around in a three-piece suit and the mafia goons (supposedly) intimidating Principal Skinner, to better coincide with the film. They even based Fat Tony’s appearance on Paul Sorvino’s teddy bear of a mob boss, Paul Cicero. A lesser Goodfellas actor, Frank Sivero, claims that Matt Groening and co. used his likeness as well — albeit without his permission — for Tony’s henchman, Louie. And while Louie’s black curls certainly look a bit like Sivero’s character, Frankie Carbone, the similarities end there — Louie’s a bit trimmer than Carbone, and his high-pitched squeal of a voice is much more reminiscent of Joe Pesci. —Dan Caffrey

Also based on a true-crime book by Nicholas Pileggi, Casino is Goodfellas on steroids: more violence, more swearing, more De Niro, and a whole lot more Joe Pesci. But Scorsese and Pileggi dreamed up a brutal inverse on their previous collaboration in the death of (another) Pesci hothead, Nicky Santoro. Where as Pesci took down a character played by Frank Vincent in not one, but two Scorsese flicks (the first being Raging Bull), Vincent gets one hell of a bloody revenge in Casino. After he drives Santoro and his brother out to a cornfield under the false pretense of business negotiations, he and his crew savagely bludgeon the siblings with baseball bats. Even by Scorsese standards, the beating is relentless, going on so long that Vincent and his fellow attackers start to run out of breath. The same can’t be said for Nicky and Dominick, who are still breathing when they’re thrown into a hole and buried alive. It’s a rare moment bid for audience compassion in an otherwise unforgiving film, humanizing a man who has been nothing but a monster for almost three hours straight. —Dan Caffrey

Jim Abrahams’ (or Jane Austen’s) Mafia! is a criminally underrated exercise in gangster parody — think Airplane! but with crime films — that lampoons Goodfellas, Casino, and The Godfather series with manic glee. Of that holy cosa nostra trinity, it’s Goodfellas that’s responsible for the funniest gag, where Jay Mohr’s goof on Michael Corleone, Henry Hill, and any other number of mob protagonists rattles off a seemingly endless string of nicknames for his associates. But unlike the world of Goodfellas, where the monikers are strictly metaphorical, the slang here becomes hilariously literal: Nick Molinaro, who runs the North Side, is an Eskimo, Al “The Mailbox” Spaducci lives in an actual mailbox, and, best of all, Charlie “Big Red-Ass Baboon on His Head” Petrelli comes equipped with that very thing, complete with a pool of primate butt-sweat forming on the back of his suit. —Dan Caffrey

The Top 10 Pop-Culture Homages to Goodfellas