It’s not really a review in the normal sense of the word, as Tyler doesn’t actually break down any of the album. Rather, it’s more of his love letter to MC Ride and Zach Hill, who Tyler proudly declares to be his “meth.” He also offers an important public service announcement: “DO NOT LISTEN TO DEATH GRIPS WHILE DRIVING A FAST CAR WITH POWER MECHANICS BUTTON ON AND YOUR TIRE TRACTION OFF.”

Summer had just started. I’d decided to buy a trampoline for my room and some mini kayaks for my pool. I’m in my room about to set up the trampoline, and on a related video on YouTube, I read, Death Grips – Guillotine (Live). I’ve had people tell me about them and blah blah, and I never really gave them a chance. I click it. First 30 seconds, I’m like, ‘OK, fuck, I’m getting bored.’ By 55 seconds, I am fully in. The skinny black guy on stage with the beard that kind of reminds you of one of those homeless people you see with a Starbucks cup … ended up being the coolest shit I’ve ever seen. I don’t know what it was, but for the next two hours, I sat there clicking every single video, link, article, website that had to do with MC Ride and Zach Hill. I put on the Exmilitary mixtape and Lionel and I put together a full trampoline in 17 minutes. That’s when I realized that Death Grips was my meth. I put that on and I can do anything and do it efficient as fuck. With that being said, DO NOT LISTEN TO DEATH GRIPS WHILE DRIVING A FAST CAR WITH POWER MECHANICS BUTTON ON AND YOUR TIRE TRACTION OFF. Nico, Travis and I legit almost died because I decided to put on ‘Stockton’ and burn rubber at a red light, which resulted in my car spinning down at street at 60, 70 miles per hour at an intersection in Los Angeles around 2:45 on a school day. Not one scratch, no one hurt, not one car touched. I don’t know what it was, but it led me to believe that I had a grip on death (sorry, I had to say that).
Favorite Song: “Hustle Bones” 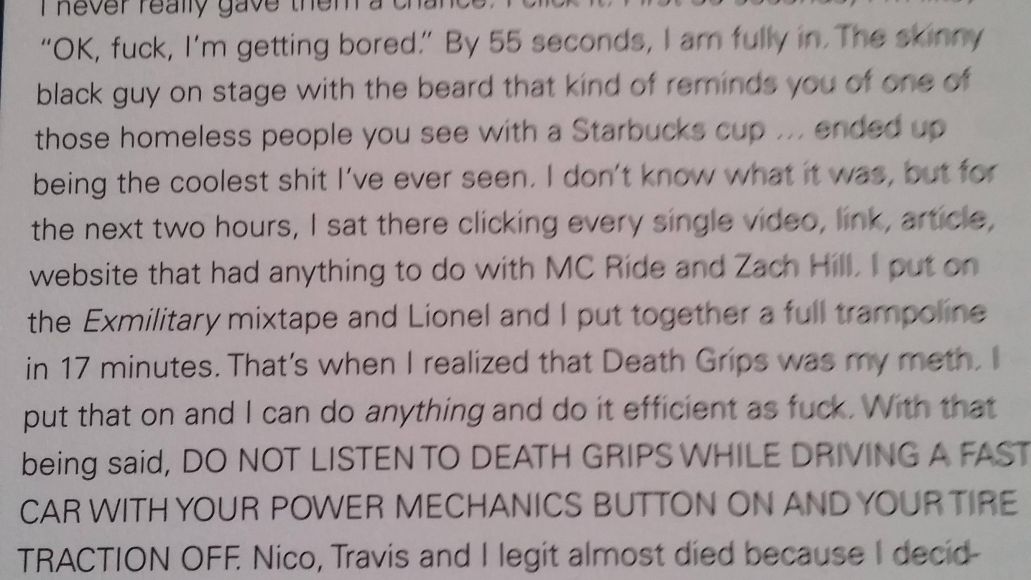