Ever wonder which movies inspire your favorite bands or how filmmakers work with artists to compile your favorite soundtracks? Sound to Screen is a regular feature that explores where film and music intersect. This time, Collin Brennan revisits 2001’s Josie and the Pussycats and tries to distinguish satire from hypocrisy.

I was in the eighth grade when I bought a ticket to watch Josie and the Pussycats in theaters, my sense of adulthood pinned precariously to the peach fuzz above my upper lip and my very grown-up (or so it felt) crush on the film’s star, Rachael Leigh Cook. If my freshly post-pubescent mind was really as mature as I thought it was, it would have had no trouble grasping the irony at the heart of Josie. Having just rewatched the film and been taken aback by its profound cynicism, I can confirm that I missed a few things the first time around.

The film’s plot revolves around the perils of subliminal advertising, with The Pussycats whisked away to stardom by a conniving record executive (Parker Posey) who uses their music to brainwash the public into buying more stuff. Josie, Valerie (Rosario Dawson), and Melody (Tara Reid) become innocent pawns in a game much larger than rock ‘n’ roll, though the dichotomy between their band and the “evil record business” only works if we go along with the notion that there is something essentially pure about their music and ethos. But is there?

Josie is not a subtle film by any means, though certain scenes suggest that the bandmates are at least partially complicit in their own extortion. These scenes are typically accompanied by a wink or slight nudge that topples over the fourth wall before it’s hastily built up again. Immediately following the montage that sees The Pussycats blast into the upper echelons of the Billboard charts, Cook pauses for a moment and asks, “Does anyone else think it’s strange all this happened in a week?” But she quickly casts that worry out of her head, too intoxicated by her newfound fame and riches to care much about the things that supposedly matter: hard work, long hours, and the sense of having gotten somewhere on your own merits.

Moments like these suggest that Josie understands itself as a satire of the traditional rock ‘n’ roll movie and of the music industry in general. This is a pretty weird angle for a film based on a Hanna-Barbera cartoon from the 1970s, but it makes a little more sense when you consider what was going on culturally around the time of its release. Fresh off the high of ‘90s alt-rock, pop music plummeted to its nadir around the turn of the 21st century. A meticulously coifed and highly processed army of boy bands and teenaged divas had wrestled the airwaves away from the likes of bands (Nirvana, The Smashing Pumpkins) and singers (Liz Phair, Alanis Morissette) who wore their authenticity — real or imagined — as a badge of honor.

The knock against this new batch of pop stars boiled down to a question of motives: were they really here to grace us with their music or to sell us a product with all of the signifiers of music but none of the existential qualities that make it good and worthwhile? Of course, the record industry had been guilty of “manufacturing” bands for decades, as examples ranging from The Monkees to Milli Vanilli attest. But something about this latest attempt seemed a little too blatant, and besides, if grunge and its culture of authenticity had accomplished anything, it was to make listeners more wary of what Corporate America tried to shove down their ear canals.

Why directors Harry Elfont and Deborah Kaplan decided to use a bunch of 40-year-old comic book characters to tackle this particularly zeitgeisty subject matter is anybody’s guess. As is their stance on the issue, for that matter. In the introduction to this piece, I called Josie and the Pussycats a profoundly cynical film, and much of that cynicism stems from a running gag about product placement that’s frankly unprecedented. There is hardly a frame in this movie that does not feature an advertisement of some kind, be it for Target, McDonald’s, Starbucks, or even something as mundane as Bounce dryer sheets. 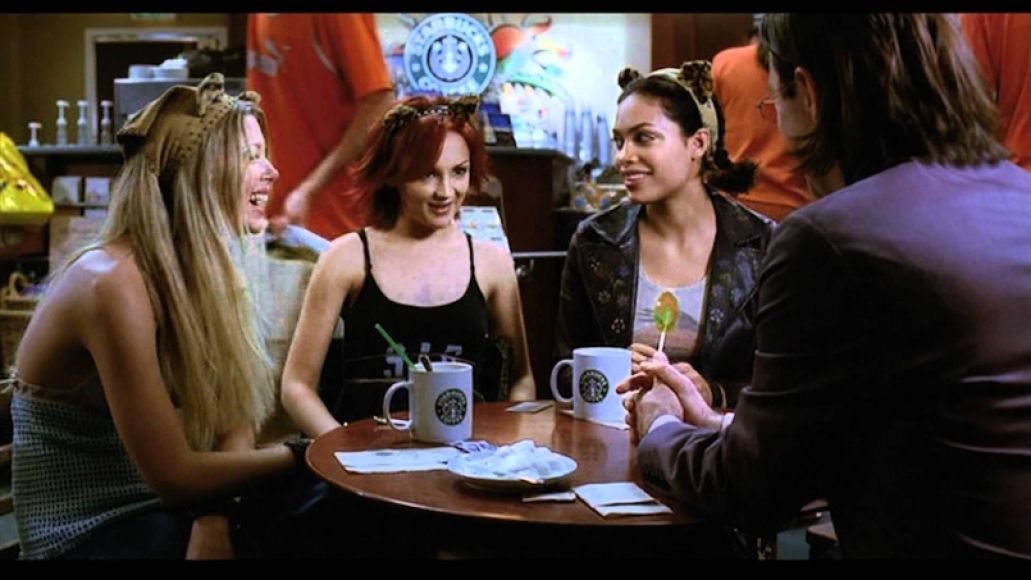 None of these corporations paid for these spots; the filmmakers inserted them voluntarily, presumably as some kind of meta-joke about the very thing the plot seeks to expose and undermine. Some might call this irony, but it’s also hypocrisy. I know this because, as an eighth grader, I failed to note anything out of the ordinary about this rampant product placement. In this sense, you can say it did its job, even if it was doing this job under the guise of satire.

But the strangest example of this hypocrisy can be found in the “band” itself, specifically in the soundtrack the movie spawned. Because even as Josie rails against artificiality in rock and pop music, it is perhaps the most perfect embodiment of exactly that. Cook, Dawson, and Reid did not write “Three Small Words”, the infectiously catchy single that kicks off the film, though they do strut and lip-sync their way through it with gusto. Nor did they pen or perform “Spin Around”, “Pretend To Be Nice”, or any of the soundtrack’s other hit songs. They do, on the other hand, appear on the CD jacket, the illusion of a band that never really existed used to sell and market songs written by the likes of the Counting Crows’ Adam Duritz, Fountains of Wayne’s Adam Schlesinger, and Kay Hanley of Letters to Cleo (Hanley also provides the voice of Josie).

The irony here is unmistakable, though the purpose it serves is elusive. One of the two most interesting things about Josie and the Pussycats is how adamantly it resists letting the viewer in on whose side it’s really on. The other, of course, is how perfectly it predicted (and spoofed) the “mall punk” trend of the early 2000s.

To call Josie and the Pussycats a punk band would be a bit of a stretch, but the film clearly positions them as anti-establishment types who rely on power chords and palm mutes to get their message across. In this way, the trio makes for a neat facsimile of Green Day, Blink-182, and any number of bands that commodified the basic gist of punk and brought alternative fashion kicking and screaming into the mainstream. Mall punk probably peaked in 2004 with the release of Green Day’s American Idiot — an album as important for its aesthetic as for its music — but it’s hard to deny that the Josie and the Pussycats soundtrack had the same formula down pat three years earlier.

And you know what? I’m going to go out on a limb and say that it’s a pretty good formula. Most music critics take for granted that authenticity is a trait to be prized and applauded, but I still find myself returning to the Josie soundtrack every now and then and getting caught up in its imaginary world. Even now I like to pretend that it’s Cook singing right to me through the stereo, and the fantasy is pleasant enough that any question of what’s “real” and what isn’t ceases to matter for a little while. This is the same reason I still defend Green Day to their many detractors; divorce the band from the traditional expectations of punk and alternative music, and you’re left with what amounts to a movie-version of the band. It’s a movie I like to watch sometimes, confident enough that it won’t warp my perception of reality. 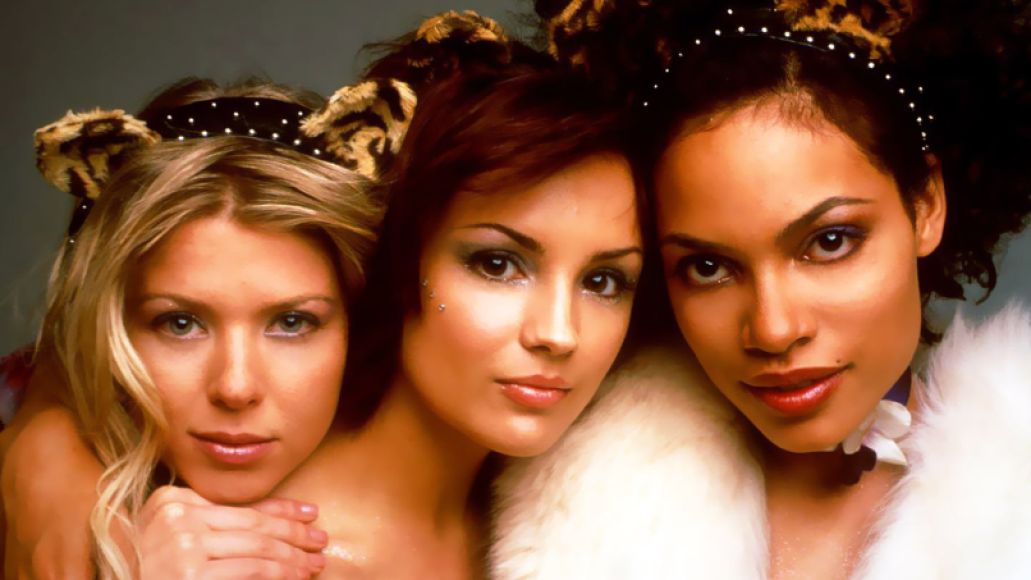 I could say the same for Josie and the Pussycats, even though I still can’t tell if it’s brilliant satire or hypocrisy in its most naked form. The truth probably falls somewhere between those two extremes. In the nearly 15 years since the film’s release, authenticity has remained a crucial subject of debate in pop music, with artists as diverse as Taylor Swift and Drake subjected to criticism based on how “real” the image they present to the public really is. It would seem like some things are slow to change, or maybe never really do. After all, the peach fuzz is long gone, and I’m still crushin’ hard on Rachael Leigh Cook.