If a great international music festival combines nostalgia with novelty, this year’s Iceland Airwaves is about to become the musical equivalent of a double rainbow. A constant quest to find artistry that could lift a genre out of its commercial doldrums hovers over the five-day event, and it all began at Reykjavik Airport in a country known for Björk, elves, and Sigur Rós. Iceland Airwaves does something few festivals bother trying to match by packing the bill with a record number of native and international bands like FM Belfast, Beach House, Hot Chip, and Bo Ningen.

Still, there’s no denying they lean toward the unconventional. In the 2012 film Iceland Airwaves: A Rockumentary, musicologist Donald Gislason said, “Iceland seems to turn western ideas about musical culture on their head. Alternative music is mainstream in Iceland. It’s like Christmas to them.” Dozens of acts and thousands of people (Consequence of Sound included) will flock to the capital city from November 4th through the 8th. Ahead of the 17th iteration of the northern music celebration, festival director Grimur Atlason shares an inside look at what makes his homeland so special.

What is the biggest misconception about Iceland?

Thankfully people are more aware of Iceland than they used to be, but it was not uncommon that people would ask if we lived in snow houses. Maybe people don’t know how few we are. In reality, we’re only 320,000 people, and two-thirds live in Reykjavik.

You were once involved in government, so you’ve gone from being a mayor to working with some of the biggest names in the music world: David Byrne, Morrissey, Antony and the Johnsons, Sonic Youth…

I’ve been working in music since 1987, way before I took over Airwaves. It wasn’t often; Iceland is such a small community you weren’t able to do a show every week. You really couldn’t sell the tickets. I ended up doing so many single shows, Morrissey being one of them.

One thing that I’ve noticed is how focused Iceland Airwaves is on the bands that hover over the musical threshold – even booking TV on the Radio when they were barely known at the time.

There are endless stories! When we booked Haim in 2011, they came to Iceland and became huge after that. Now we’re getting Hot Chip again — they came in 2004, and they’re undeniably cool. We try to book bands that are crispy, new, and fresh. Even if there are bands that have been around for a few years, we always try to pick what’s current. We had Flaming Lips last year. We pick bands like that because we know they have something to offer still.

The ultimate goal is to showcase fresh talent, but to have the confidence that your musical taste is going to match the public’s is always risky. How do you scout Icelandic bands?

There are 170 Icelandic bands on the bill this year, and for us there’s never enough. We are constantly watching bands and going to shows, not only in Iceland but also all over the world. Don’t forget people can apply through our website, too; even in Iceland, there’s bands we’ve never heard about that we hear through our application system. I think we have at least 40 bands who have never played Iceland Airwaves before, which some people might think isn’t much, but keep in mind that these are 40 bands from a population of 320,000. There’s an overflow of talent in Iceland.

I can imagine it might feel a bit like choosing a favorite child, but which Icelandic artists are you listening to now, and which are you most excited to have play live?

There are so many cool bands. The hip-hop scene in Iceland is really interesting — Úlfur Úlfur, Sturla Atlas, and Emmsjé Gauti — and on the more established side you have the new album from Agent Fresco. They have been so good live recently, so I’m so looking forward to them. On the older side, you have a band called Ham, which I have personally admired for many years. Then we have Axel Flóvent, Sóley has a new album, Vök … it’s exactly like picking out of my babies. The punk bands I love a lot are Börn, which means children in Icelandic, led by three women, and then another called Pink Street Boys. I could go on forever. I’ll see other bands and think I’ve now offended someone! 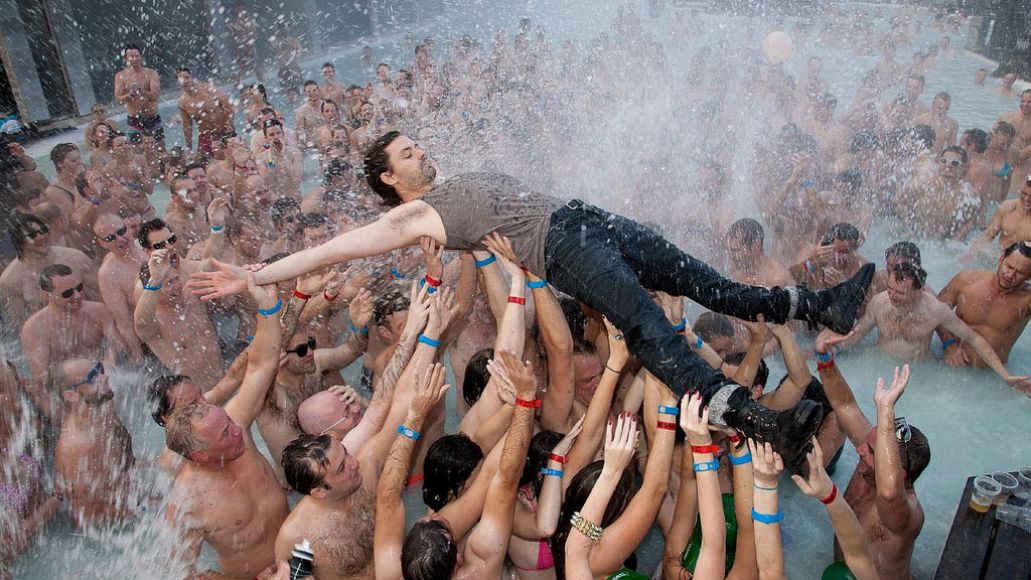 How many people are you expecting at Iceland Airwaves this year?

It’s going to be a sold-out festival. As of right now, we only have a couple of tickets left. There will be 9,000 people, which is the capacity of the festival: 5,500 from abroad and 3,500 Icelanders.

Isn’t that the definition of a successful festival, coaxing in the majority of festivalgoers from all over the world?

The first goal is to have a festival that can stand up against international festivals; the second is to increase tourism off-season, which is November; and the third is to export Icelandic music … so that’s success, yeah!

We also have the “off venues” in Iceland, which are 240 bands playing 290 official showcases. Some of them are playing twice over five days. The off-venue schedule runs from the morning to 8 o’clock in the evening, and shows happen all over town across 40 to 50 venues — probably around 600 to 700 shows in total. These shows usually have attendance of 60,000 people. Off-venue shows are free of charge, too, so if you find yourself around one, just enter and join. They’re at the bookstore, the barber, the coffee shop.

Where would someone get the schedule?

If you download our app, you’ll get all the schedules and view both the festival and off venues together.

How many venues are secured for the festival?

Remember, it’s only a couple of meters between the venues — even if you’re going to the furthest one away, it’s only 600 or 700 meters apart. There’s 13 venues in downtown Reykjavik. The smallest one is 300 capacity with the closing night at the 3,000-capacity venue, where Hot Chip and FM Belfast will be closing. This is because it’s impossible to go onstage after them. 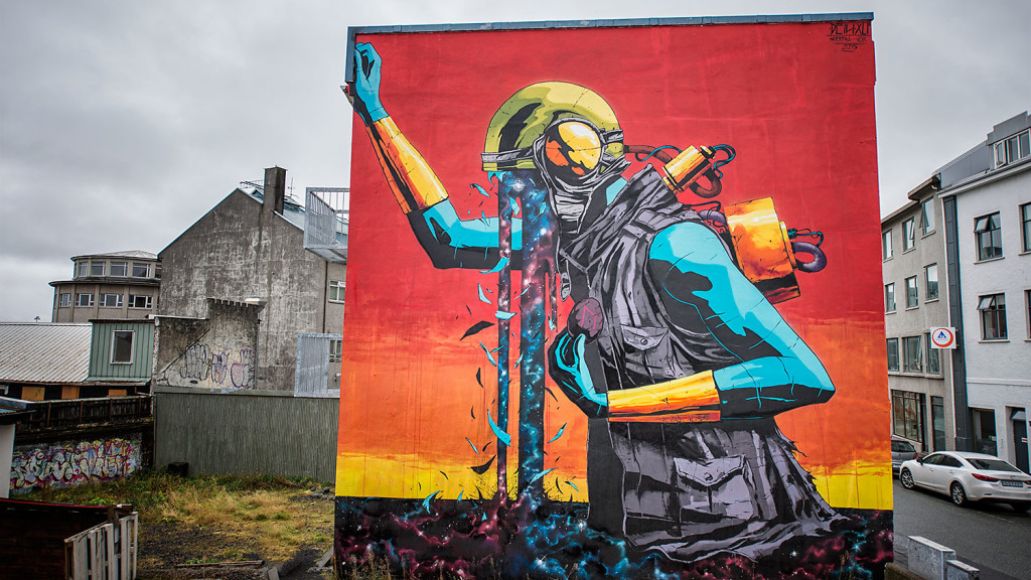 It’s one thing having been around for so long, but with festivals all over the world, you can’t just relax and assume you’re ahead of the game. What changes have you made this year?

We always try to add something, and one of our big projects this year is a collaboration with Urban Nation in Berlin. It’s called Wall Poetry, and it involves 10 walls in Reykjavik. We got famous urban street artists to paint the walls, and their source of inspiration is music that will be played at Airwaves. When you’re at Airwaves, you can download the Spotify playlist and walk the streets to the buildings and listen to the music and experience the walls – it’s pure art.

That taps into people who love music and those who follow the European urban art scene, too. Considering the option of using spaces like that to compliment your festival, how is Reykjavik the perfect festival city?

Of course this is a small city, but because it’s the capital of the island, we have to be urban. You’re coming to the smallest big city in the world. You have the advantages of the big city and this nature and weather that give it this mystique. You see the mountains in the distance and get in your car and drive half an hour and you’re in the wilderness. The music that we have at Airwaves, the quality of music is good, and the food makes it easy to digest it all.

I love the concept of tapping into the mysticism of the country instead of trying to be international and faceless.

Nothing is forever, and we’re so aware of that. When people come, they need to feel welcome and know that we want them to be here. I’m so proud of where I come from and excited to see people experiencing the hot tubs and the pools. Sometimes I interact with people there and they don’t know who I am, and it’s so important that we keep focused on being polite and humble when people are having difficulties. After all these years, we’ve tried to fix everything; now I’m just really excited if and when it can go wrong. If it will be a perfect festival, then it will be horrible, and I’ll never be able to do anything again.

I’m sure the news of Björk canceling was a devastating blow to the roster. How did you come back from that?

We are in Iceland, and Björk is Icelandic, and a lot of people were coming to Iceland to see Björk — we know that. So we could have thought, “This is the end!” It was a big, big blow for us, but we just kept on going. I think that is the key to any success: You need to be as focused and prepared as you can.

Lastly, as a native and Iceland Airwaves expert, are there any must-sees and survival tips for the festival?

I would recommend what I do! You must go to the swimming pools, but I’m not talking Blue Lagoon. That’s beautiful and once in a lifetime, but I mean the swimming pools of Reykjavík. Start and end your day there. Eat fish! Fish is what you eat in Iceland. As for the festival, go with the program and mark off what your must-sees are and be there two hours prior. If you’re running to see them all, you’ll be let down because it’s difficult to turn up five minutes prior to a show and be 100% certain that you’ll get in. It seems like a simple tip, but I usually do it for myself. A few years ago, I wanted to see Anna Calvi, so I showed up three hours early. It was me and 10 others, and when she came onstage, it was packed and the line was three miles down the road. Just do it and you won’t be frustrated.

Iceland Airwaves: The Smallest Big City in the World