Traditionally, video games have served as a kind of escape from reality — an electronic valve that shuts off all the pressures and anxieties of life in the actual world. Guitar Hero Live is not a traditional video game. In fact, the reboot of Activision’s popular music rhythm franchise is so thoroughly different from its predecessors that it’s hard to say what to call it. An immersive concert experience? A first-person music video? Boot camp for aspiring rock stars? Whatever you want to label it, one thing’s for sure: Guitar Hero Live is not recommended for people who suffer from stage fright.

That’s because, unlike previous iterations in the series, the game utilizes full motion video to simulate a real-world concert experience — complete with cheering fans, yes, but also with hecklers ready to turn on you at a moment’s notice. Flub a couple of notes on the revamped six-button guitar controller, and you’re liable to catch more than a few boos raining down from the cheap seats.

The innovation of including an actual live audience may seem like window dressing on the same old gameplay experience, but it really does heighten the stakes of a game that seemed to have run its course five years ago. An even more exciting development is the Guitar Hero TV feature, which adds new songs to the game every week and curates playlists to help gamers constantly discover new music.

Consequence of Sound was in attendance Sunday night at the Guitar Hero Live release party at YouTube Space LA, and what we saw was exciting. Potentially very exciting, if it manages to live up to the lofty expectations of the developers at Activision and FreeStyleGames. The idea of a video game that can introduce you to a new favorite band is a strange one, but Activision’s Eric Hirschberg likened it to an MTV for the modern era. The analogy makes sense in a roundabout way; now that we watch most of our music videos on YouTube, there’s no platform that essentially forces us to discover new artists by playing what it wants. Guitar Hero TV seeks to be this platform, and it wants to make music discovery more palatable by turning it into an actual game.

Time will tell if this idea will work, but it had plenty of supporters on hand at the YouTube Space on Monday night. For the big kickoff, Activision converted a section of the massive warehouse into an intimate concert hall and invited Rival Sons, Grizfolk, and the almighty Weezer to headline the festivities. Each band played an abbreviated set that will soon be featured as a playable option on Guitar Hero TV, and the crowd of developers, journalists, and celebrities responded with full-bodied cheers. 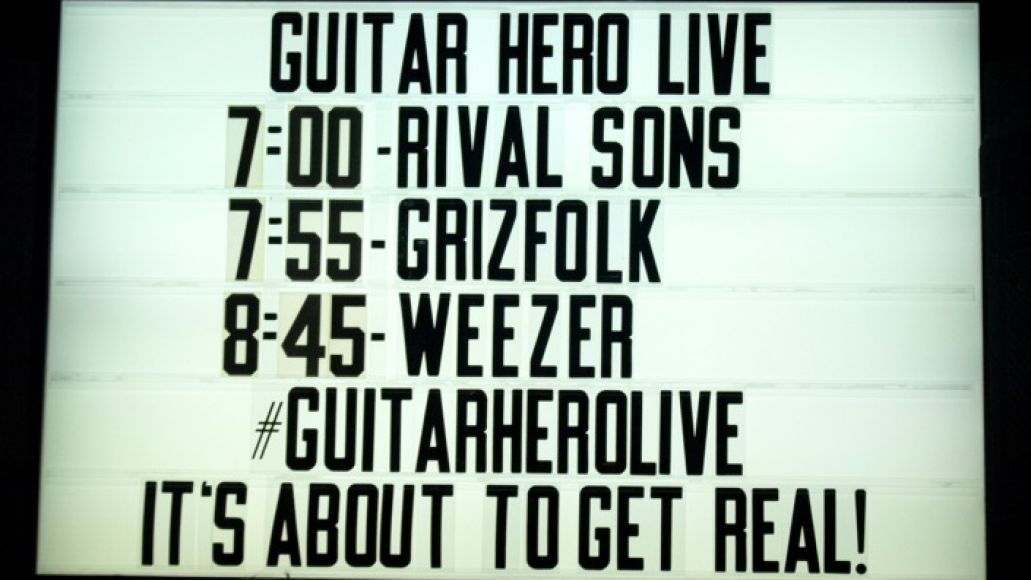 Based out of LA, the bluesy Rival Sons seem a perfect match for the Guitar Hero video game; they’re all about the riffs, first of all, and they carry themselves like the glam gods that ruled much of the ‘80s. Grizfolk followed with a set of anthemic indie rock that shows how wide Guitar Hero’s appeal can be. It’s the kind of thing that’s very quickly coming to define alternative music on the radio — foot-stomping choruses, pitch-perfect harmonies, and no scorching guitar solos to be found.

Weezer, of course, is Weezer. After enjoying a renaissance with last year’s Everything Will Be Alright In The End, the band comes across as loose and relaxed these days. Sure, they didn’t stick around for long, but Rivers Cuomo and co. worked the crowd into a tizzy with back-to-back hits “Undone (The Sweater Song)” and “Say It Ain’t So”. 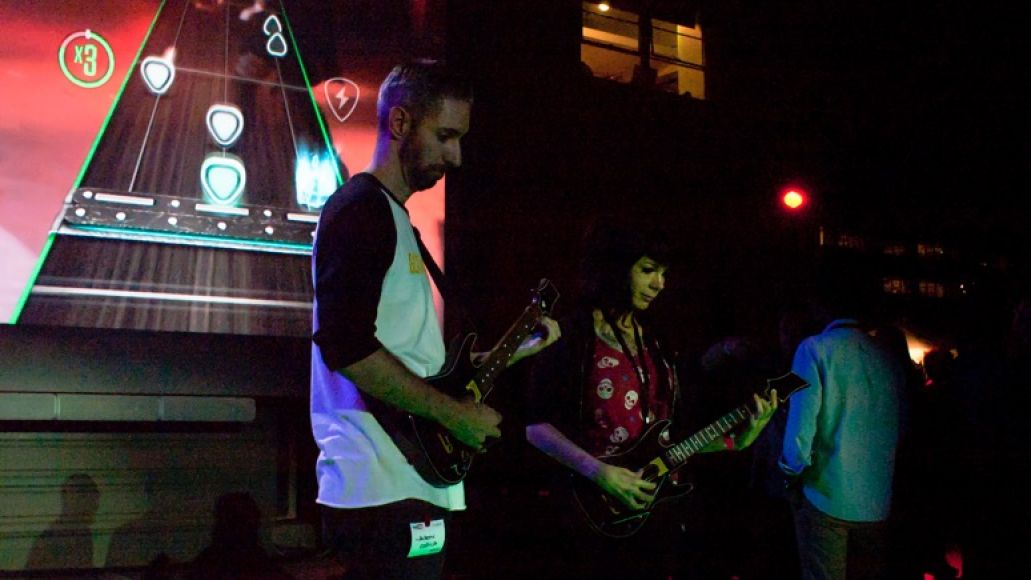 Though there couldn’t have been more than a hundred people in the space, it felt like a proper concert. If performances like this routinely end up on Guitar Hero TV, it will spell a very exciting future for the game indeed. Of course, players will have to keep in mind that it is only a game, and on Monday night we learned that this might not be the easiest thing to do. Boos hurt, even when they’re coming at you from inside a TV screen.