And with that endearing remark, Julia Holter and band whisked us away into a heady opener of “Horns Surrounding Me”. While most of the studio versions of her songs have a steely-eyed confidence and reserved intensity, live she exuded a palpable sense of joy. However, it makes total sense why she’d be in such high spirits: just three years ago she played the small room at New York’s Le Poisson Rogue. Last night was a sold-out show at Brooklyn’s larger Rough Trade on the back of one of this year’s finest albums, Have You in My Wilderness.

With a steady stream of quality albums since 2011’s Tragedy, it’s no surprise that she’s seen a huge jolt in popularity. Her last album, 2013’s Loud City Song, was dense and claustrophobic, but this year’s Have You in My Wilderness is something different. It still packs in a sense of melancholy, but those feelings are abated by leaning ever so slightly to the pop side of the spectrum. Thankfully, her experimental tendencies still run the show while her melodies have become increasingly ear-wormy.

To translate those complicated songs into the live arena, Holter assembled a crack team of some of the best players in the industry. Devin Hoff, known for his work with a wide range of experimental musicians such as Nels Cline and Xiu Xiu, worked groovy fills into songs like “Lucette Stranded on the Island” while locking into drummer Corey Fogel’s unique sense of rhythm. Meanwhile, Deanna Maccabe’s violin flourishes and backing vocals added a wonderful, full texture to most of the songs as they deftly swirled around and harmonized with Holter’s melodies. We were also lucky enough to get Danny Meyer, occasional tour mate of Holter and Chairlift, to come down and provide some expertly placed saxophone on a few newer songs. To many, it would seem like an impossible challenge to bring some of these studio creations to life, but Holter and her band make it seem positively easy. 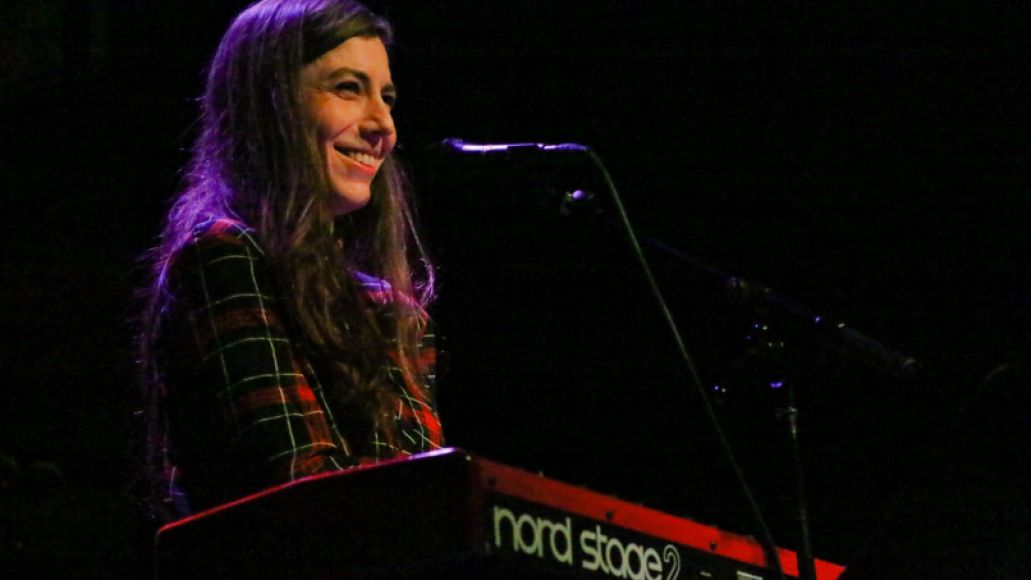 Speaking of Holter, the performance did struggle through some issues of mixing volume. It was no problem when she used some treble-heavy harpsichord sounds, but it felt like some of the more subtle and warmer synth pads were lost in the mix. Otherwise, the sound was spot-on with clear harmonies and full orchestral moments. It’s not quite the same stimulating experience as listening to Holter’s music with a nice set of headphones, but it’s a satisfying one nonetheless – especially to witness Holter’s jubilant live presence and her funny banter.

Upon introducing “Silhouette”, she stated that “It’s one of the many songs I do where I go crazy at the end … I go insane!” And when the song’s elongated outro arrived, she delivered by smashing her hands on the keyboard in a fit of messy glory. “Everytime Boots”, an otherwise jaunty, music hall-esque number, similarly saw the entire band launch into a crazy fit of noise before breaking into the last chorus – the sound of clouds bursting away to reveal a mirthful sunrise. Even Holter couldn’t help herself as she ran in place like an energetic cartoon character before contorting her face into a Cheshire Cat grin to sing the joyful chorus. “Feel You”, the opening track from Have You in My Wilderness, locked itself into a tight bass groove that saw the crowd gently swaying and cautiously dancing to the music. It wasn’t a lively crowd, but you got the sense that everyone was paying extremely close attention to the tight interplay shared between Holter and her band.

“I had an interview with an Austrian journalist earlier today,” Holter half-joked,” and he asked me, ‘Do you whistle when you’re alone?’ How patronizing! Do you think they’d ask a man that?” This launched into set closer and whistle solo-featuring “Sea Calls Me Home”. She’s got a good point, but I’ll be damned if that whistling solo, expertly executed by Holter, Corey, and Maccabe, wasn’t an absolute highlight of the entire set. With Meyer’s skronk sax in all of its glory, Holter led her band to a rousing conclusion. Holter need not worry about her rising profile – her songs are beautifully crafted, and her live show brings them to life in a wonderful fashion.

Setlist:
Horns Surrounding Me
Silhouette
Marienbad
This Is a True Heart
In the Green Wild
Lucette Stranded on the Island
Feel You
Everytime Boots
Have You in My Wilderness
Betsy on the Roof
Sea Calls Me Home