Mandatory fun came to Hammersmith’s Eventim Apollo as “Weird Al” Yankovic’s 100-date world tour had its London stopover. Originally opened as the Gaumont Palace cinema in 1932, the Apollo has had almost as many names and owners as “Weird Al” has had costume changes, yet this grand Art Deco theater may never have staged anything quite like this before. Apollo has been charged with many mantles in Greek and Roman mythology, but has now been christened the god of comedy. In front of a packed audience, whose ages ranged from young children to those old enough to be Yankovic’s parents and whose collective sartorial style was more IT Crowd than classical, the stage was set for something special.

During an opening montage of wacky video clips set to “Fun Zone”, the four-piece band took the stage and launched into Al’s Pharrell Williams spoof “Tacky”. We could hear the words but not see the singer. Then the frontman came into view on the big screen with a camera fixed on him as he sang his way from outside the venue to backstage and eventually along an aisle through the stalls, wild-eyed and besieged by selfie opportunists. The jacket of many colors came off and a baseball cap was donned next for “Lame Claim To Fame”, all of which threw more focus on Yankovic’s highly instinctive brand of dad dancing as the spiral design on his pants created an illusion of extraordinarily loose limbs. Attention then shifted partly to the screen as footage of the original acts from Miley Cyrus to Daft Punk accompanied the glorious “Now That’s What I Call Polka!” accordion-driven medley. 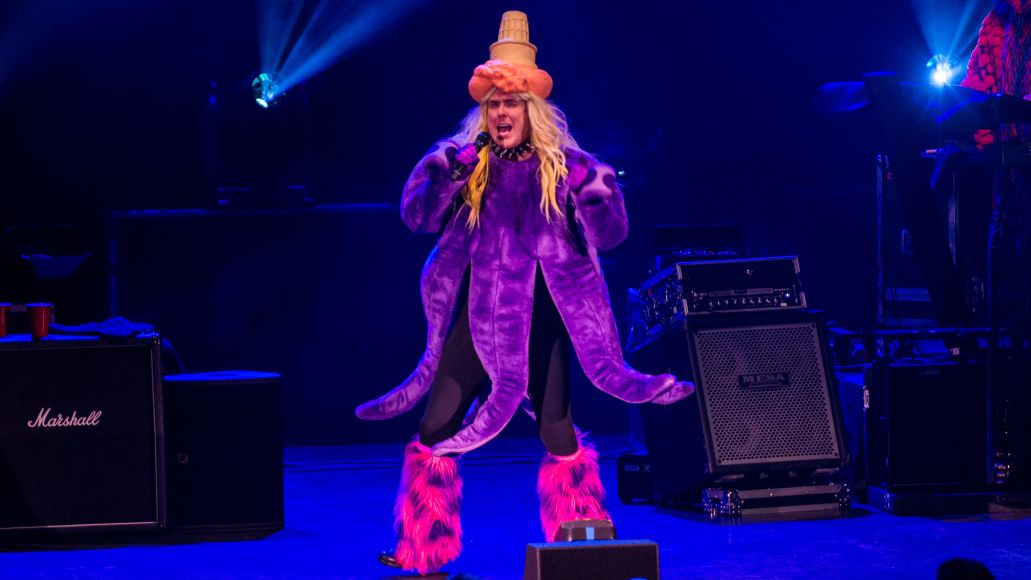 There was scarcely a pause before video clips heralded the first costume change. Al reappeared as a bright purple octopus with an inverted ice cream cone hat for his Lady Gaga tribute, “Perform This Way”. The great thing was that the band shared in this first makeover, from the skeleton-suited bassist to the nun on the drums, just as they did for subsequent ones. A spoof video interview with Celine Dion covered the next quick change as tout ensemble returned as Devo for “Dare To Be Stupid”. Other than wishing for bursts of lyrics to appear on screen, as Al’s best lines can be lost in the carefully choreographed chaos around the stage performance, there was no doubt the crowd was devouring each set piece. The singer had a look for every song, from the inflated suit for the Michael Jackson take-off “Fat” to the foil hat during the homage to Lorde’s “Royals”.

The show’s format of parodies, video clips over costume changes, and more parodies might be familiar to repeat customers, but seeing “Weird Al” live for the first time, the overriding impression is one of sheer entertainment that never flags or falters. A big part of the show’s success came down to the proficiency of his live band, who managed to be everyone’s favorite tribute act while contributing comic moments of their own along the way. The way the keyboard player involved sections of the audience in a mad call-and-response routine before the Star Wars-inspired encore was as side-splitting as it was indescribable. The clean-cut rock accompaniment to “First World Problems” showed the other prime facet of this exemplary outfit. 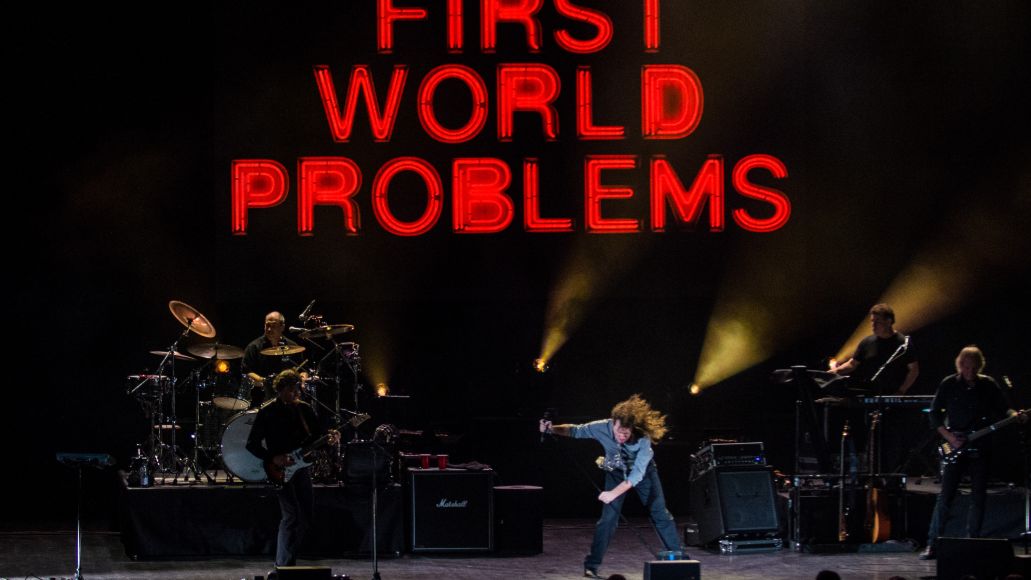 It was a night when highlights came thick and fast; among them, “Smells Like Nirvana” hit the spot for real comic showmanship, while the Maple Leaf-jacketed singer was agreeably manic during “Canadian Idiot”. On both songs, and indeed through the evening, Yankovic’s vocals adapted to the material with consummate ease, whether in powerhouse, rap, or croon mode. He charmed the ladies as a true lounge lizard on “Wanna B Ur Lovr” and even mixed up his best-known parody “Eat It”, reworking it unplugged in the style of Eric Clapton’s acoustic version of “Layla”.

With videos between songs lampooning a range of targets, from Eminem’s syntax to the Whiplash school of musical instruction, the pace never slackened. The show peaked with the splendidly constructed “Word Crimes” with (at last) all the lyrics displayed so the grammarians in the audience (that’s most of them) could savor every adroit phrase, followed by an Amish makeover for the reimagining of Coolio’s “Gangsta’s Paradise”. One of the most demanded encores I’ve seen was delivered on cue with “Weird Al” and band in Jedi garb, flanked by Imperial Stormtroopers and a giant Darth Vader, as the audience predictably demonstrated that they all had cellphones, too. The “American Pie” send-up of “The Saga Begins” and of course “Yoda” to The Kinks’ “Lola” completed this triumvirate of singalong crowd-pleasers.

Veteran of 14 studio albums plus compilations, books, and DVDs, “Weird Al” Yankovic has made a career as a parodist par excellence. He will have clocked up enough air miles to have earned a weekly trip to Sydney for a year as he completes this marathon tour in January with shows down under. Now (that’s what we call) 55 years old, the Californian shows no signs of taking life easier. The whole audience stood and applauded wildly at the end. I can scarcely recall such an enthusiastic ovation in a considerable time and it was richly deserved; mandatory, even.

Setlist:
Fun Zone
Tacky
Lame Claim To Fame
Now That’s What I Call Polka!
Perform This Way
Dare To Be Stupid
Fat
First World Problems
Foil
Smells Like Nirvana
Medley – Party In The CIA / It’s All About The Pentiums / Handy / Bedrock Anthem / Another One Rides The Bus / Ode To A Superhero / Gump / Inactive / eBay
Canadian Idiot
Wanna B Ur Lovr
Unplugged medley – Eat It / I Lost on Jeopardy / I Love Rocky Road / Like A Surgeon
White & Nerdy
Word Crimes
Amish Paradise
Encore:
We All Have Cell Phones
The Saga Begins
Yoda 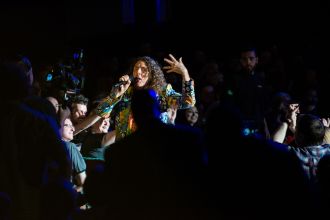 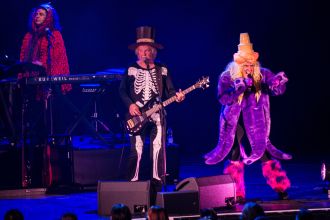 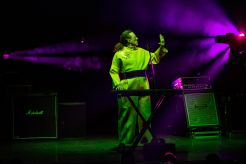 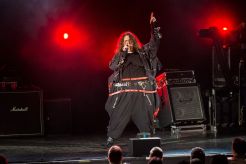 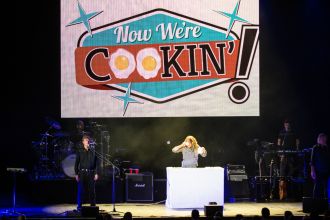 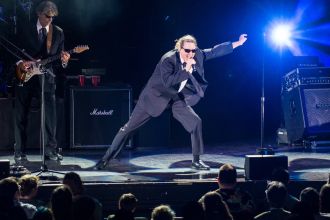 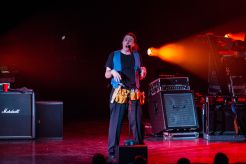 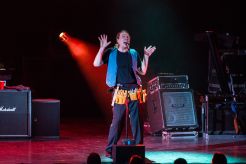 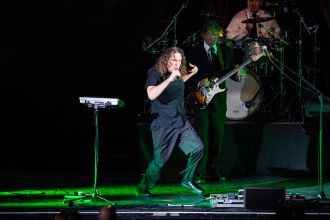 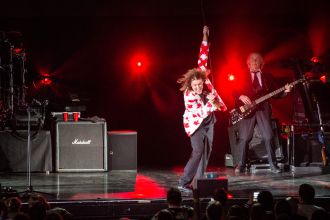 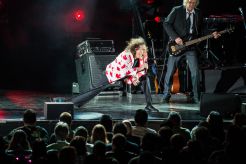 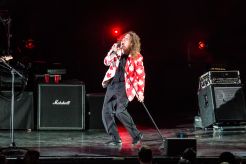 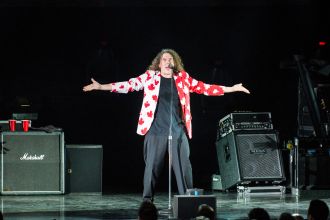 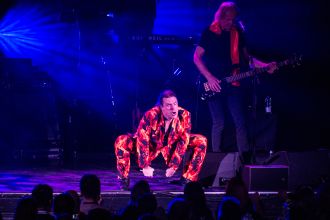 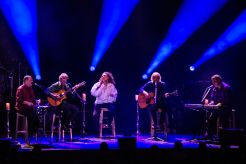 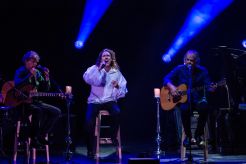 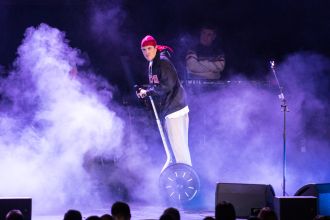 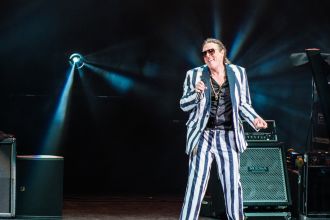 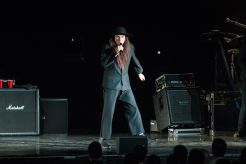 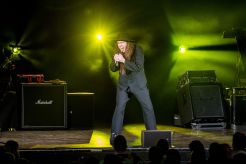 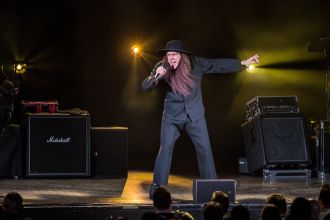 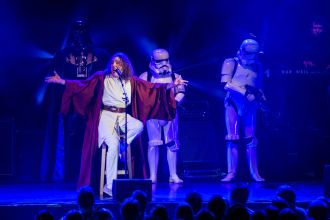 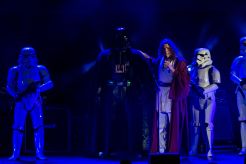 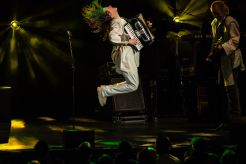