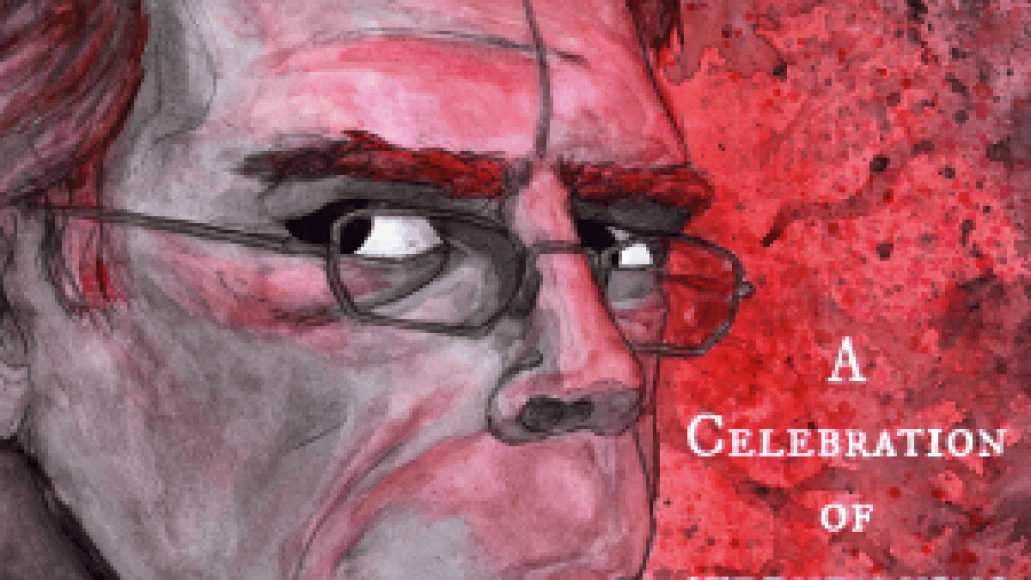 Welcome to Remake This!, a series where we look at past movies and not only propose they be remade, but suggest how to remake them. Whether a movie tanked, had a good concept hidden within a weak film, or we just want to give something another chance, Remake This! is a cinematic “What If?” wish list. Our last installment considered the benefits of naked space vampires, and this time for Stephen King Week, we pick a King remake for its 25th anniversary.

So many Stephen King movie adaptations deserve, or even need, the remake treatment.

Oh sure, you have your greats, masterworks like Carrie or The Shining or The Shawshank Redemption or Stand by Me. Then you have the B-tier King licenses, the debatable but still pretty solid fare like Misery, Dolores Claiborne, The Mist, The Dead Zone, The Green Mile, Christine, Creepshow, and Pet Sematary. The fun genre movie stuff. Those aren’t’ the classiest or most compelling efforts, but they have their support.

Then you get into the chintz, the chop, and the truly crummy or low-end efforts. We’re talking Sometimes They Come Back. Firestarter. Riding the Bullet. Dreamcatcher. Thinner.

All those TV movies that may have been faithful, but have aged as badly as the makeup and effects within them.

Look, you may have loved or been terrified by some of these efforts as a wee one, but come on, actually watching IT today is far different than being freaked out by stills of Tim Curry as Pennywise. For God’s sake, Harry Anderson from Night Court is in IT. Stephen Weber from Wings was in the 1997 The Shining! Sitcom stars shouldn’t always be in spooky material, you know.

The point here is that some King films are just made different than others. Some are better suited for remakes than others, and it speaks to the enduring appeal of King’s work. 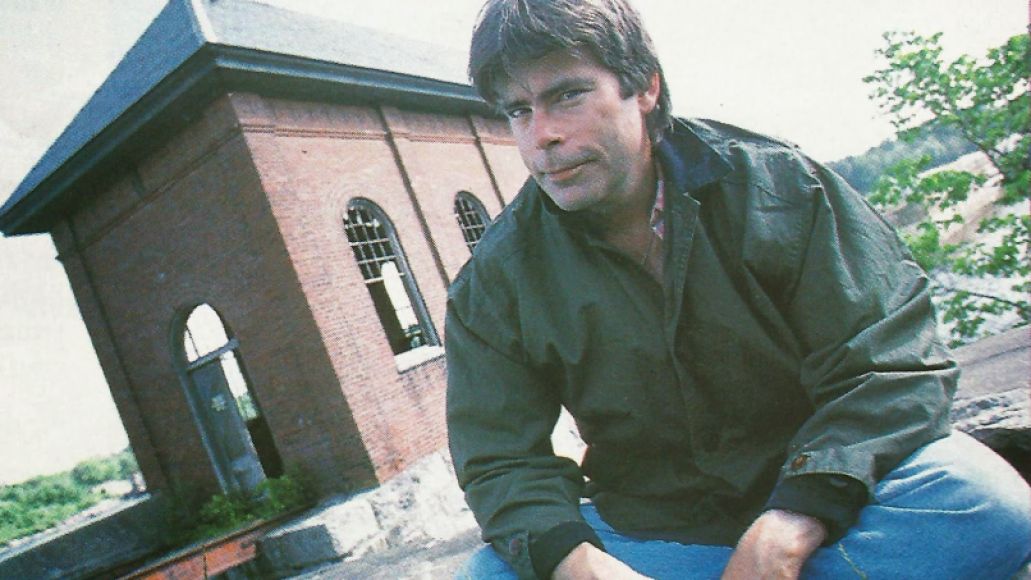 King’s amassed fortunes, praise, and a ravenous fanbase for his contributions to the canon, and he’s become known for his deadpan, local yokel writing style filled with hidden intrigue and dread. He’s a gifted, natural, no-bull writer. For what feels like one of the last true “name” authors at your local Barnes & Noble, King has more command and grit and integrity in his material than say, the shlock-y Dean Koontz, who one could swear piggy-backed his writing career off being placed next to King in stores for years. King has inventive, often killer ideas that have lasted, and he’s typically lacked the myopic nature of a Cussler or Grisham or Clancy. Perhaps that’s why King keeps churning out the creeps, and films keep getting made again and again from his work. While some of the aforementioned authors have lost their luster in the film adaptation game, King’s still one of the hottest properties around. According to Box Office Mojo, his films have made a cumulative billion-plus dollars in domestic grosses. That’s a lot of typewriters!

The “King of horror” has 216 writing credits on IMDB, including films and television adaptation credits, along with his screenplays. He’s acted in several films, and even directed a coked-out cult favorite with Maximum Overdrive (perhaps for another edition of Remake This!). And the number keeps growing as he keeps writing. King’s a recognizable brand, and the remake years of his life are here. Sure, Kimberley Pierce’s Carrie made a bloody thud in theaters, but the ideas and talent were there. Studios will not be deterred and will keep raising King’s books from the dead until he’s no longer profitable or interesting to filmgoers (so, likely never).

To that end, the Hollywood gossip monster’s been in a stir over the state of IT and The Stand, two properties that have been in development hell for some time but look like they might hit theaters in the next five years. And they have the absolute right idea: take challenging and dense properties and do them up with ambitious, hungry talent. Josh Boone has bragged about a multi-part Stand series with numerous hot stars, although CBS and Showtime have been throwing wrenches in Warner Bros’ machine, and name directors like David Yates, Scott Cooper, and Ben Affleck failed to get the mega-novel into production in recent years. But still, things look promising! As for IT, well, the movie suffered a blow when Cary Joji Fukunaga walked from the production over alleged budget and script issues, but it found a new helmer: Andres Musichetti of 2013’s creepy, decent Mama.

So it’s safe to say that King’s in full swing at the studio level. Warner even wants a prequel spin-off of The Shining about The Overlook Hotel, and somehow Mark Romanek is still attached. The mystique (and money) is still there. But with all the traction for King properties going on, and Warner and New Line chomping away at the big-name properties, has anyone considered dusting off a crappier film?

Hey, did you know that Graveyard Shift is 25 years old this month? 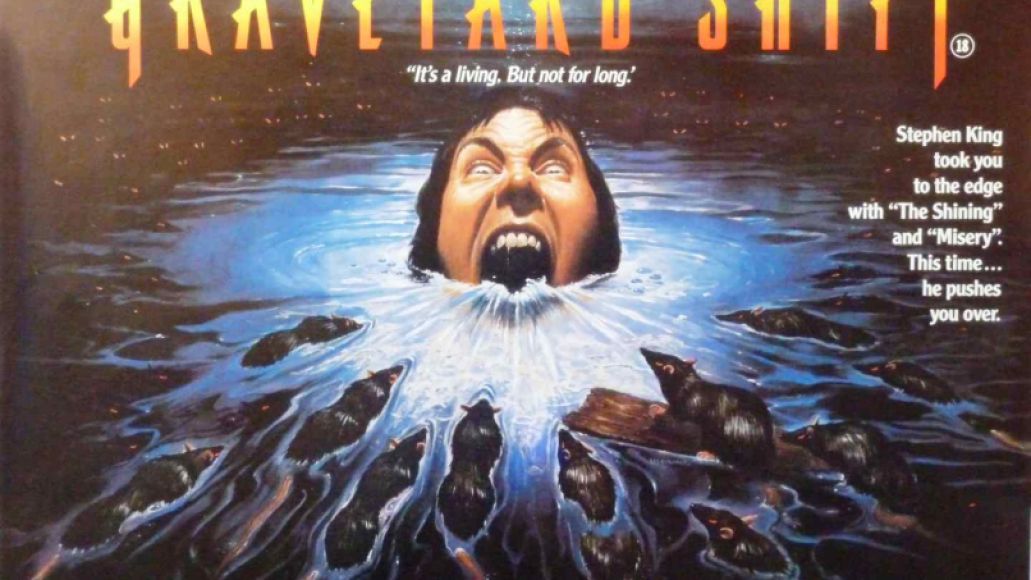 Now, that may seem like opportune timing, but seriously, there’s an insane creature feature with a universe of unnatural abominations to be developed out of the original 1970 short story about rat creatures in the bellows of an old mill. What we got in 1990 was a really low-budget slasher about some rubbery beast that featured a glorified Brad Dourif cameo, back when that meant something.

In short the film is a kill-em-off, with a handful of mill workers being clawed and eaten one by one by a big, vicious mutation that spawns in darkness and goes unseen by ordinary eyes. It’s an 89-minute pest featuring no-name actors, cheap effects, and bad hip-hop…remix…something music over the credits. (It was the style at the time, what do you want?) Graveyard Shift’s been deservedly forgotten, springing up in King box sets and horror movie shows like TNT’s old Monstervision (side plea: bring that show back.). If there were a power ranking of all the King films, Graveyard Shift would probably be part of the bottom rung. There’s nothing even all that distinct or cornball to make fun of. Sure, the end credits are silly, but Ralph Singleton’s take on Graveyard Shift is hardly worth criticizing or even talking about. But if you dig deep enough, back to the source, there’s some creepy crawly fun to be had with Graveyard Shift.

Yes, Graveyard Shift is badly acted, poorly constructed, and altogether not that scary. Yet the biggest flaw (and potential goldmine) in this particular King adaptation is that it doesn’t draw more from King’s hair-raising short. Perhaps it was a budgetary issue, or a desire to focus the story, but the original short had monsters and rodents the likes of which you’d never want to see. Check this out: the story features a grotesque underworld of self-sustaining monsters and creatures living in the basement of an old mill, and the critters and creatures are disgusting as hell. Albino rats that resemble weasels. Rats with armored skin. The short has Honda-sized bat-rat creatures, as opposed to the film’s sole latex machine. And perhaps most disturbing of all, there’s a queen rat the size of a cow, with no legs or eyes, that births other rat creatures all day. None of these things were in the film, and those might’ve been nightmare fuel of the highest order if the effects had any.

And who are we to pass up a buffet of bloody and disgusting inventions like that? That’s how you make a great creature feature! In the wake of Jurassic World, Godzilla, and King Kong, don’t people want animal action? Imagine a film where maybe the creatures are front and center, given a sizable amount of time to develop in every sense, and the humans are secondary, maybe even less sympathetic than the creatures. Gareth Edwards’ Godzilla was close in that respect, but such lousy characterizations dampened the experience. Dawn of the Planet of the Apes is a strong example of species at odds, but covered in less drool and weirdness.

The short story’s insane monstrosities and King’s notion of an ecosystem gone awry met with the distressing reasons anyone would ever have to cross them: that’s how Graveyard Shift could come back as a killer work. Graveyard Shift could work as a monster mash and a blue-collar piece. Think about it. The Thing, but with sympathy for its gross beings.

If handled by a director of genre talent with a handle on either visual or practical effects (doesn’t matter which, just commit to one or the other), Graveyard Shift could be a stunning pandemonium shadow thriller. The remake could be all about the bastard results of genetic malpractice run amok. Ever see Microcosmos? Imagine that level of up-close insight into willies-inducing new life and the shock and fear it inspires in people. 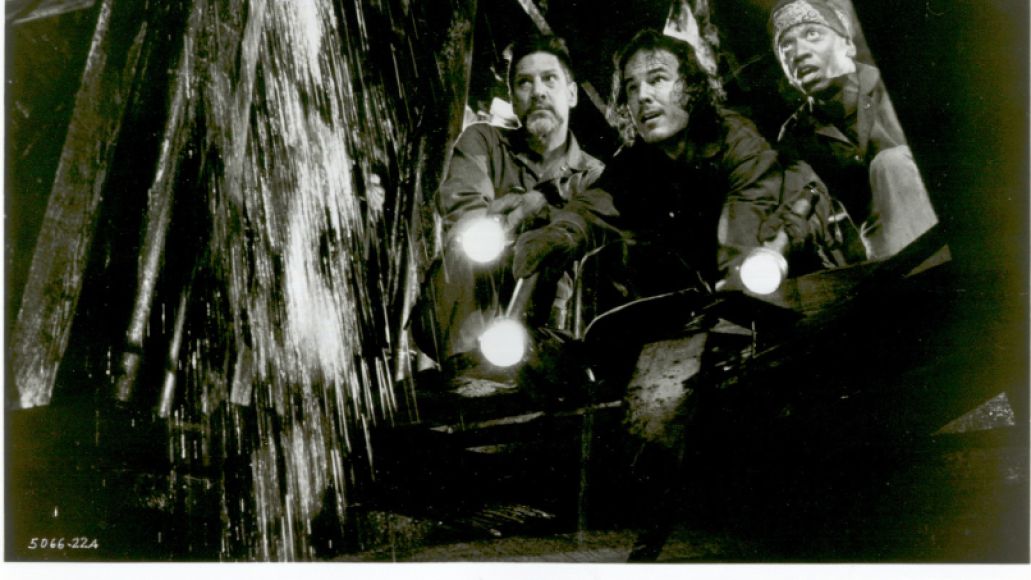 Also, after making the new Graveyard Shift a Lovecraftian feature, give the film thematic purpose. Speak more loudly to its world of low-income struggles and being forced to survive in dire circumstances. Low creatures procreating in the worst circumstances could result in horrendous offspring. Lower-class working opportunities, graveyard shifts in dumpy jobs, could result in terrible luck. Graveyard Shift could be all about desperation, the will to survive, and the ugliness that brings.

Now that’s a King remake that would be worth making. Plus, you know, it has none of the added pressure of following in the footsteps of a legit Shining. 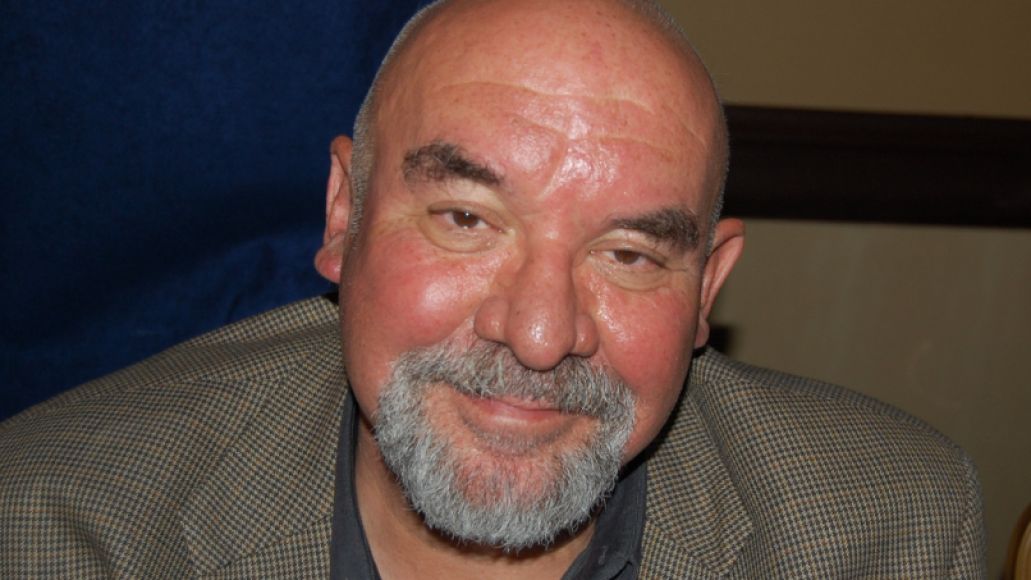 You’re probably thinking Guillermo Del Toro because of the creatures, but he’s too busy committing to projects and tinkering with production design. Get a scrappier, more hardcore director for a Graveyard Shift remake.

He hasn’t made a movie for seven years, but Stuart Gordon could make one ridiculously entertaining comeback with this. Re-Animator and From Beyond are some of the finest and slimiest genre features of the last 30 years. They rely on grody effects, great ideas, and actual, silly, extreme character motivations and development. If Gordon was onboard and still interested in making these kind of films, Graveyard Shift could be his monster opus. 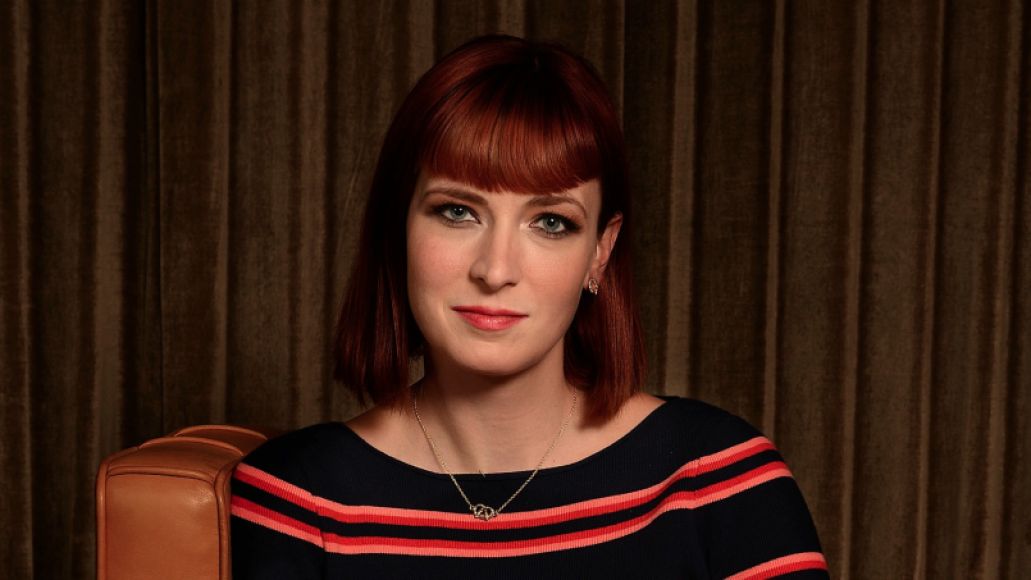 The tone of the film should be of dread, and of unnatural survival rearing its ugly head. Graveyard Shift should be like Glengarry Glen Ross with pale sub-creatures and hungry workers. Terse, freaky, anxious. No, David Mamet shouldn’t write this; he’s too exacting and analogue. But Graveyard Shift could benefit from some razor-sharp dialogue and characters with attitude, not to mention a commitment to delineating disgusting things.

Diablo Cody could be a nice fit for the project. She polished and humanized the grisly 2013 Evil Dead without credit and wrote the clever but weakly directed Jennifer’s Body. She has genre chops and an ear for deliciously snarky patter. Let’s see if she’s up for the graveyard shift. 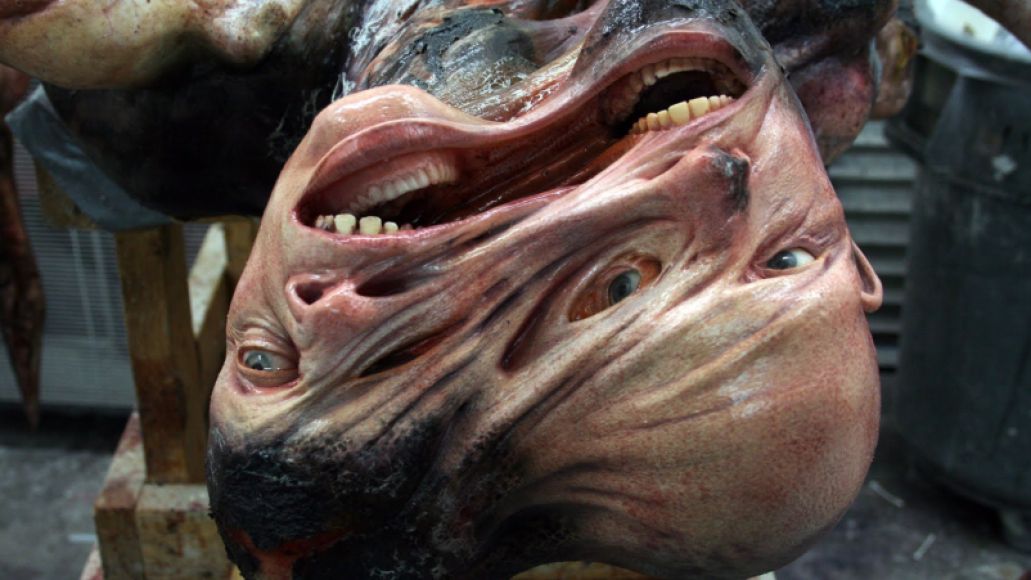 There’s an incredible Amalgamated Dynamics video of their effects work on the 2011 Thing online, showing a whole world of makeup effects that can barely be seen in the finished film. Damned CGI won out in post. But watch ADI’s beautiful, and frankly disturbing, work on Thing, and you’ll see why they might be the right team for the job of crafting King’s indescribable, incomprehensible creatures for the big screen.