We’re not the only souls excited about the Halloween premiere of Starz’s Ash Vs Evil Dead. Millions of fans have been clamoring for a sequel forever, and all that waiting has paid off, as they’re not just getting a 90-minute film but a 10-episode season (with one more to follow next year). To celebrate, writer David Konow is paying tribute to the one that started it all.

When The Evil Dead was first released in 1981, it was a breath of fresh air for horror fans. The genre had been stuck in a mad-slasher rut, and here was an original horror flick that wonderfully showcased the low-budget ingenuity of Sam Raimi. No less than Stephen King called it “the most ferociously original horror film of the year,” and with that anointment, a new classic of terror was born.

The inspiration for The Evil Dead grew out of the drive-in era of the late seventies. John Carpenter’s Halloween was a low-budget indie phenomenon that cost $300,000 and made back $47 million domestically, which would be about $150 million today, clearly a huge return on its investment.

“At the time, there were drive-ins all over the country,” says Tom Sullivan, who was responsible for The Evil Dead’s make-up and FX. “There were triple features every week, and there was a huge demand for movies. The audiences were teenagers with disposable incomes, and the plan was to make a horror movie, get it shown, and hopefully make more movies.” 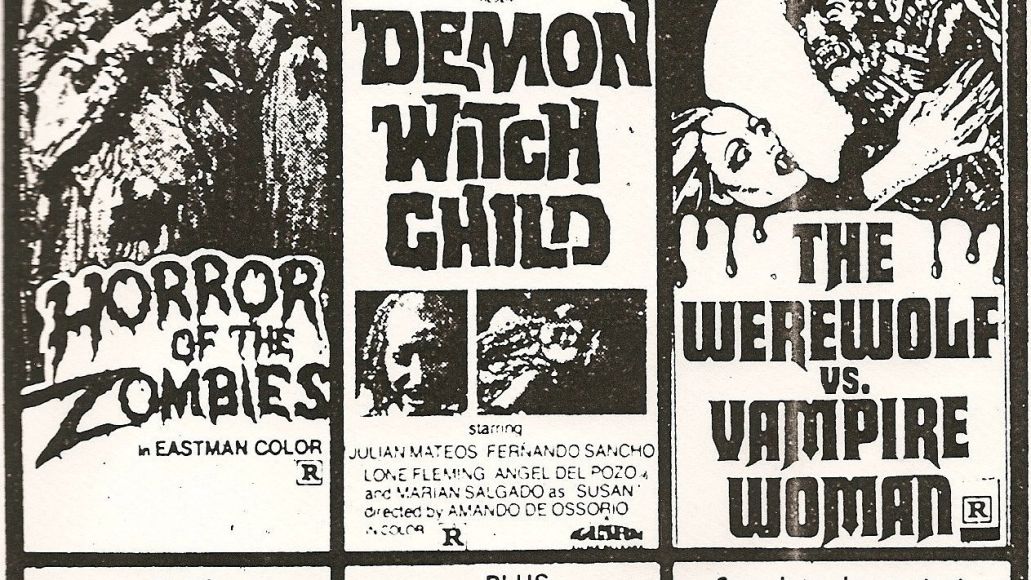 As Bruce Campbell wrote in his autobiography, “The message was loud and clear. Keep the pace fast and furious, and once the horror starts, never let up. We determined to go all-out, nonstop … a horror film with a capital H.”

And watching a lot of mediocre horror flicks at the drive-in could give a budding director a much better education than watching a well-made scare flick. “The theory was you can learn a lot from bad horror films because they come up with good ideas, but they didn’t execute them effectively,” Sullivan says.

Raimi was not initially a horror fan, but he eventually learned to appreciate the skill required to make an effective and scary movie. (William Friedkin was another director who wasn’t fond of horror, and he would ironically make one of the great classics of the genre with The Exorcist.) “Since Sam had done comedies before, we weren’t really sure he would pull off a horror film,” Sullivan says. “But I had confidence in him because the kid was so gung-ho about everything. He studied film at an amazing level.”

In the spring of 1978, Raimi and co. shot a 32-minute film, Within the Woods, on Super 8 for $1,600. It was during the making of the short that Raimi developed the “shaki-cam” effect. Instead of creating an ultra-smooth traveling camera shot, the shaki-cam showed the force and energy of the evil spirit speeding through the woods, and it became one of the trademarks of the Dead series.

Showing Within the Woods around as a demo film, Raimi and producer Rob Tapert’s Renaissance Pictures managed to raise $85,000 from a group of investors, and The Evil Dead finally began shooting in the woods of Tennessee in the winter of 1979. Raimi was hoping the weather would be warmer in the south, but it turned out to be Tennessee’s coldest weather in decades.

The Evil Dead shoot was an intense, fly-by-the-seat-of-your-pants experience. “Sam pretty much tested all of us on just what the limits of our own stamina were,” says Josh Becker, who worked second unit on the film. “Every day was 18 to 20 hours. Quite frankly, I thought Sam had lost his mind. I can’t believe I went through it.”

There were times when the crew would shoot for several days straight without rest, and one time when Raimi stuck his hand in an electrical box, he got zapped by 20 amps of electricity. Raimi got blasted back about five feet, then he got up again, and went back to shooting the film. “Never doubt Sam Raimi,” Becker says. 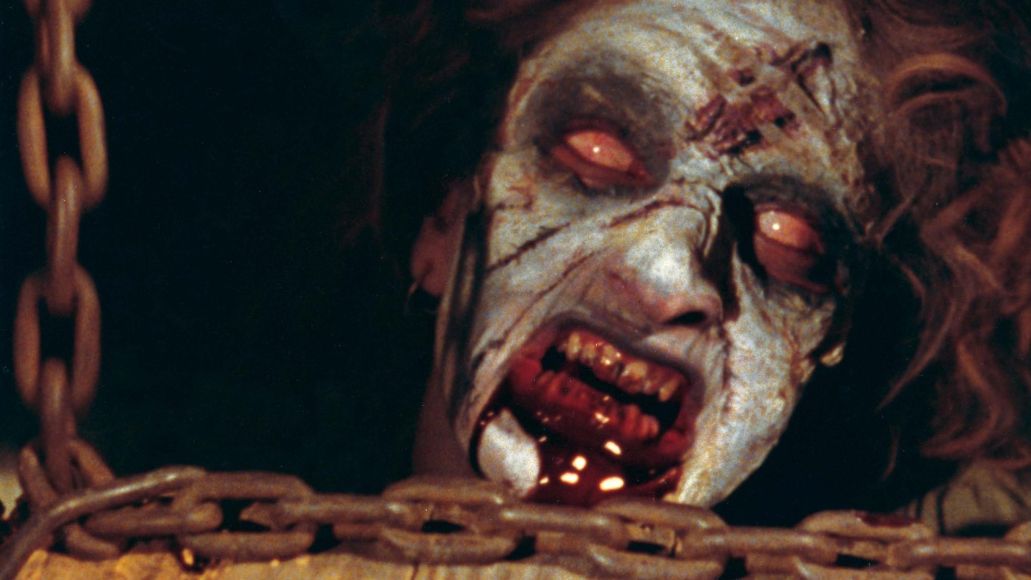 What was even more unreal was that The Evil Dead was actually coming together. “Sam had everything in his head,” says Becker. “There was barely a script, no shot list, and only a couple of storyboards he did under duress. I’m still amazed it all cut together. I thought it was going to have the worst continuity of any move ever made. Every day we’d start having no idea where we’d left off, it was all pure guesswork, but the film was so compelling it didn’t matter. If people are scared shitless, they’re not going to pay attention to continuity.”

As a long-time fan of the Three Stooges, Raimi also brought a lot of humor to the Evil Dead films, as well as the comedy trio’s wild slapstick stunts in a much gorier context. There has always been much debate among horror fans about how much you should be laughing at a scary movie, and as Tapert says, “The first movie sells more DVDs (and Blu-rays) on a year-in, year-out basis than Evil Dead II. I think the people who like horror really like horror, and they found the second Evil Dead too tonally challenging because it had too much humor.”

Along with the shakicam, Sullivan created great, cut-rate make-up FX for the first Dead film, including the actual Book of the Dead. “I was doing everything I could to enhance what was in the script,” Sullivan says. “In the script, the Book of the Dead was described as having some kind of animal skin, and a few letters from an ancient alphabet on the cover. I said, ‘This should be something that looks so evil, you don’t even want to pick it up.’” While no one can clearly remember what the make-up budget was, Sullivan recalled he spent no more than $400 on supplies for the shoot. 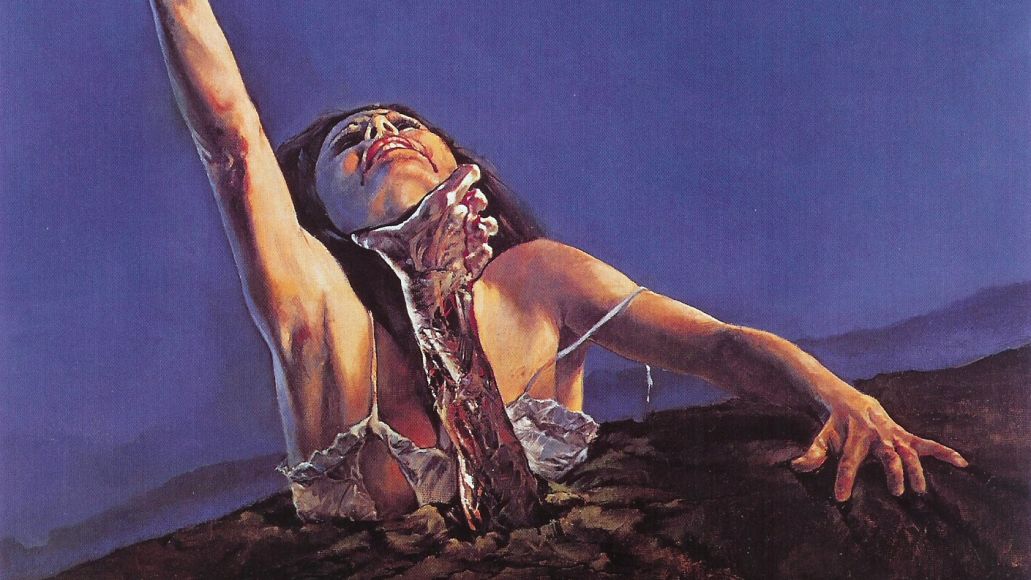 Once it all came together, The Evil Dead premiered in Detroit, MI on October 15, 1981. Irwin Shapiro, a legendary producer who helped The Cabinet of Dr. Caligari and The Battleship Potemkin find distribution in the States, got a kick out of Raimi’s scrappy little horror film, telling the director, “It ain’t Gone With the Wind, but I think we can make some money with it.”

Then Raimi took the film to Cannes, where Stephen King was promoting Creepshow. King was floored when he saw The Evil Dead, and as aforementioned, he dubbed it, “The most ferociously original horror film of the year … a thunderstorm in a bottle, just relentless.”

“That was our version of Pauline Kael,” says Tapert. “It validated all of the work we had done on that project.” With King’s seal of approval, The Evil Dead was then sold territory by territory all over the world.

The Evil Dead finally opened in L.A. and New York in April 1983, and it was a nice change of pace from the usual mad slasher fare of the time. Reviewers could clearly see that Raimi was destined for much bigger things, with the L.A. Times writing, “The Evil Dead is wholly a product of the vivid imagination of Sam Raimi, for whom this film is clearly just the beginning.” Reviewers also appreciated the low budget charm of the film, with the L.A. Herald Examiner calling it “a shoe-string tour de force.”

It would take Hollywood many years to realize that the low budget innovations of The Evil Dead could translate very nicely to, say, a Spider-Man movie, and it was a hell of a training ground for everyone involved. “As Bruce Campbell and I have discussed on many occasions, there’s nothing like having your most difficult shoot first,” Becker says. “Every movie since then has been easier. As tough as any of the movies I’ve made have been, nothing was as tough as Evil Dead.”

And indeed, The Evil Dead was a rough shoot, but it was incredibly liberating as well. “Looking back on Evil Dead, we made exactly what we wanted to make,” says Tapert. “It’s very hard to work within the normal system to make something really unique and original. Money comes with other people’s opinions, so that’s the trade-off, even to this day.” (One of the best benefits of making the first Evil Dead movie on a tiny budget is that Raimi and his partners own the negative.)

Bruce Campbell told the L.A. Times he’d be interested in making another Evil Dead movie if the money could be raised from doctors and lawyers, just like the first time around. “I’m not interested in making a $60 million studio film with a bunch of twenty-four year olds telling me what to do,” he said.

Thankfully, Ash Vs Evil Dead hasn’t had to go to the local orthodontist to get off the ground, and we hope it will indeed be a fitting capstone to the wonderfully bargain basement tour de force that Raimi unleashed onto the world back in the eighties.

Sam Raimi's The Evil Dead remains a masterpiece in crudity